Tony Rando showed his channeled and chopped 1939 Ford at the 1952 Oakland Roadster show. That is about the only thing we really know about this stylish Custom.

The first time I saw a picture of Tony Rando’s 1939 Ford was when Automotive Designer Chris Ito shared some photos taken at the 1952 Oakland Roadster show with me many years ago. It was a rather dark snapshot cutting of the rear and the passenger side fender off in the frame. But there was something about this car that I liked. The hood was extremely sectioned, very similar to the Doug rice 39 Ford Coupe, the grille was left stock, bumpers changed with the all time favorite ribbed ’37 DeSoto units. Double Appleton’s, chopped windshield, ripple disk hubcaps… and that was about all could see in this dark snapshot. Fortunately the photographer had taken the photo in such a way that the show card was very visible and I at least knew the owners name was Tony Rando from San Fransisco, and that he was a member of the Hill Toppers Car Club.

I searched for the car in other photos I had of the 1952 Oakland Roadster Show, but no luck. The owners name also did not bring me anything more. For a brief moment I thought that I might have seen the car in progress in the first Barris Kustom Techniques book. On page 26 and 27 the sectioning of a Ford hood is shown for owner Slim Messick. But after looking a bit better the hood on Slim’s Ford is sectioned less than the one on Tony’s Ford… bummer. 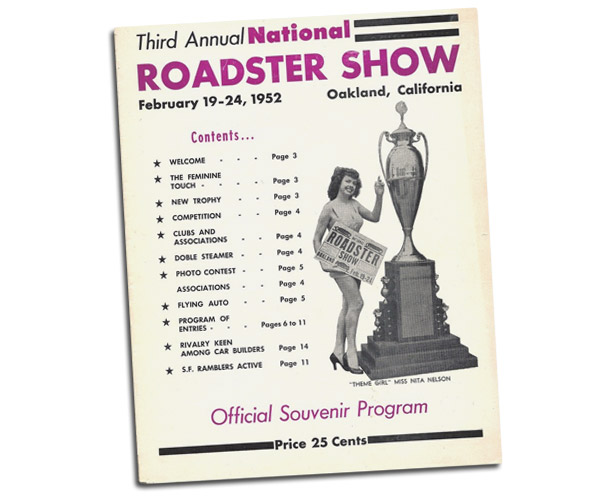 Cover of the 1952 National Roadster Show in Oakland. The only place were we have seen Tony Rando’s ’39 Ford Convertible so far.
[divider] 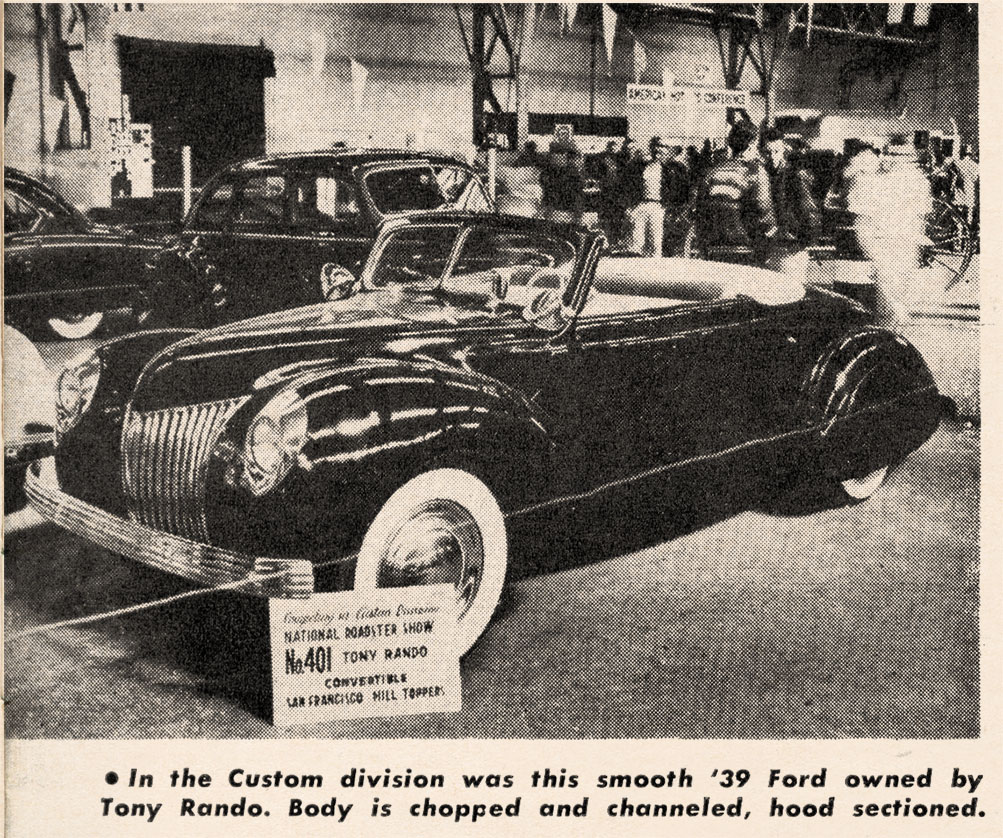 From the May ’52 issue of Hot Rod magazine. It shows that the heavily sectioned hood required the front of the hood to be reshaped, and now has a really nice curved shape.
[divider]

In January 2012 Jamie Barter sends me a scan he made of an article in the May 1952 issue of Hot Rod Magazine about the 1952 National Roadster Show in Oakland. One photo in the article showed Tony Rando’s beautiful ’39 Ford. And even though it was a rather small printed photo, it showed the car a lot nicer than the one snapshot I had from the Chris Ito Collection. This really was a very nice proportioned Custom. It reminded me a lot about the Ralph Jilek 1940 Ford Convertible created by the Valley Custom Shop. Tony’s being a bit more “vintage” styled, while Ralph’s Ford looked more modern. But both extremely nicely proportioned.

One thing that I was unable to see in the nap shot, was that the main body was not sectioned on Tony’s Ford. The body was channeled over the frame, the running boards were removed, and as far as I can tell the rear fenders remain in the stock position on the rear quarter panels (Unlike the Valley Custom Ralph Jilek Ford which had a sectioned main body). The front fenders on the car were raised a lot, it looks like the top is no level, or slightly higher as the belt-line of the car. Most likely this meant that the lower portion of the front fenders had to be extended down at the rear to meet the bottom of the body. The much sectioned hood must have taken quite a bit of work to get reshaped to fit right with the raised fenders and grille. 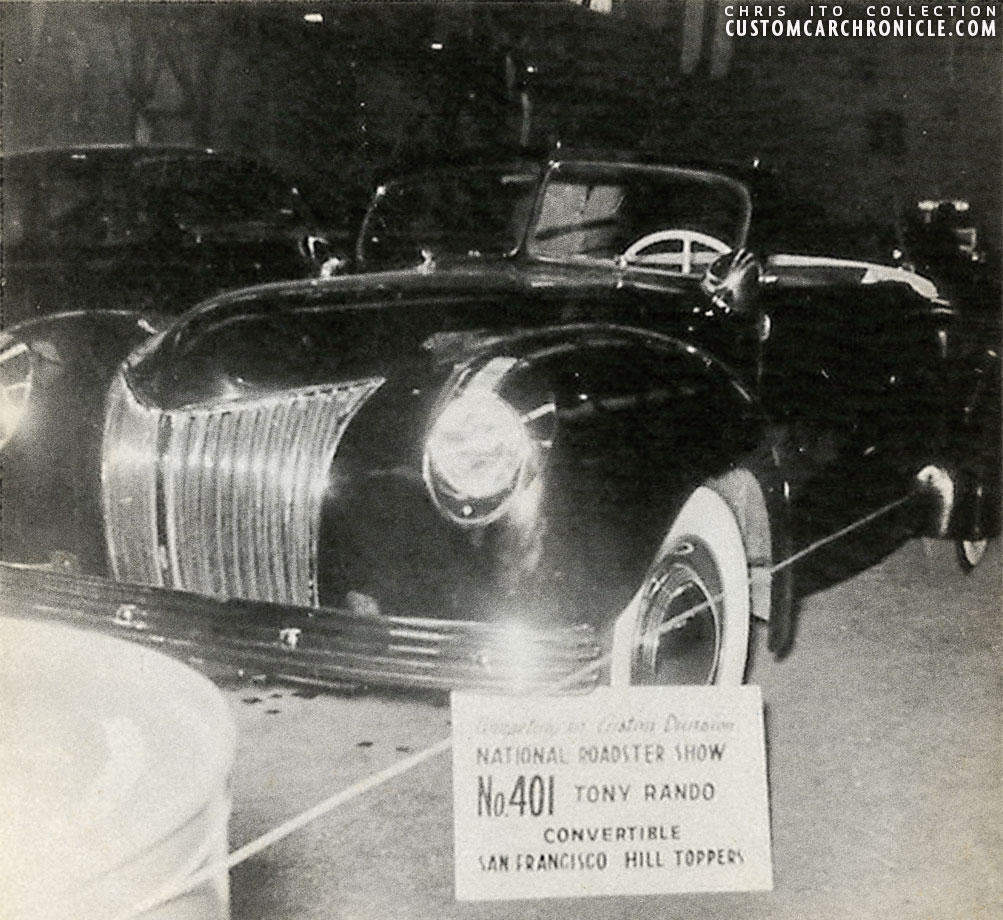 The first time I saw Tony’s ’39 Ford was this dark snapshot from the Chris Ito Collection. I really liked everything I was able to see in this photo, and the cars vision stuck in my mind ever since.
[divider]

The car has a relatively high stance, especially for 1952, but it looks very proportioned on the car. Wide white wall tires with ripple disk hubcaps are used that suit the car as perfect as they can be. The windshield is chopped, but not a whole lot, which fits right in place with the stance. All the trim has been shaved from the body, handles removed and there is not even a stainless rock shield on the rear fenders. The rear wheel opening is covered with a tear drop shaped bubble skirt. The stock bumpers are replace with the ever popular ribbed ’37 DeSoto bumpers. The interior looks to be done in two colors, a light and a medium color. The car was shown at the ’52 Roadster show without a top. 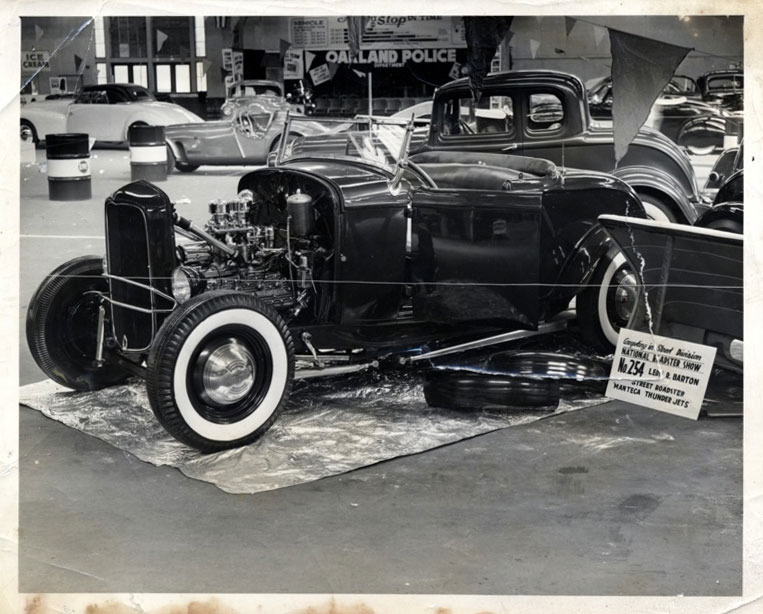 In another photo taken at the ’52 Roadster Show we can see another small portion of Tony’s Ford in the background on the far right, behind the little flag.
[divider] 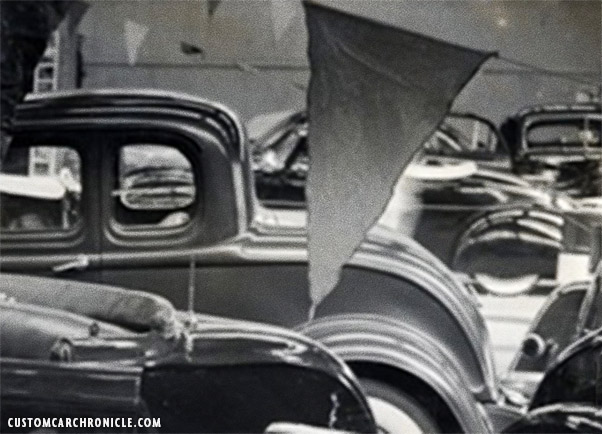 Enlarged section of the Hot Rod photo above, gives us the partial side view of Tony’s Ford.
[divider]

Ever since I have been looking to find more info Tony Rando’s ’39 Ford. It is a very nice car, so perhaps it could have been featured in one of the magazines, but no luck. And everybody I have asked about the car, and the owner could not tell me anything more. The May ’52 Hot Rod magazine photo appears to be the only time the car was published, as far as we know. Possibly the fact that the owner was from San Fransisco and not from the Los Angeles area, where all the magazine publisher were at, might have something to do with it.

The Barris shop created besides the one for Slim Messick, another car that has a lot of similarities with Tony’s Ford. The shop did a ’39 Ford convertible for Mickey Chiachi around 1947-48. This car was also channeled, had its front fenders raised, the hood sectioned, the windshield chopped and ran ’37 DeSoto bumpers. Very similar, yet still different, not the same car. Mickey’s Ford had a far less sectioned hood. Both cars were also very similar to the two cars Art & Jerry created at their Olive Hill Garage. So it is obvious that the style was very popular from the mid 1940’s till the early 1950’s, and the variations in the details and amount of chop and sectioning were unique for each of them. 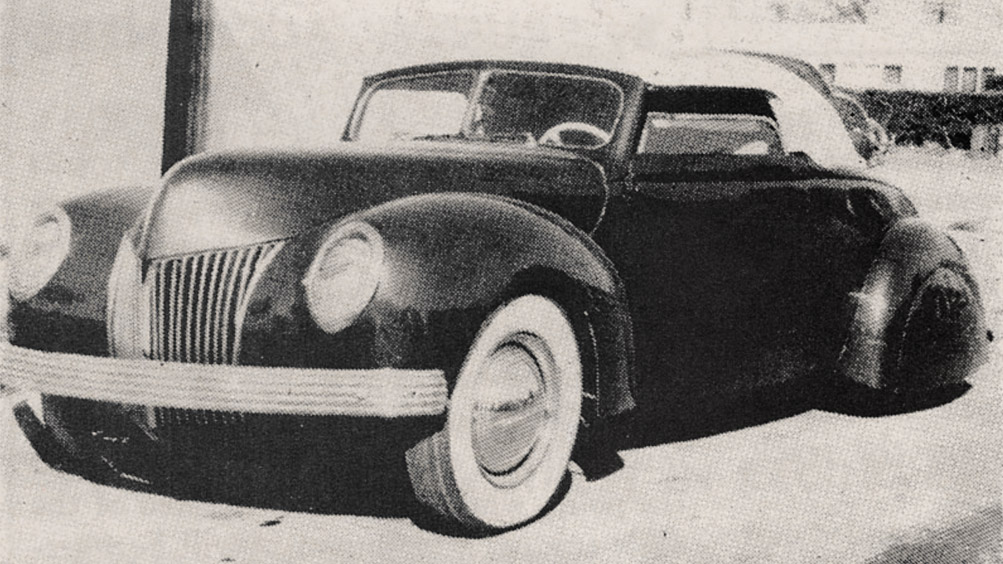 Mickey Chiach’s Barris Restyled ’39 Ford parked at the Barris Compton Ave shop around 1948. Similar in styling, but with several different details… not the car I was looking for.
[divider]

I’m still very much interested in seeing more pictures of Tony’s ’39 Ford Convertible. It is perhaps my personal favorite from a series of ’39 Fords styled in a similar way. If any of our reader has any more information on Tony’s 39 Ford, or even better some never before seen photos. Please let us know… Thank you. 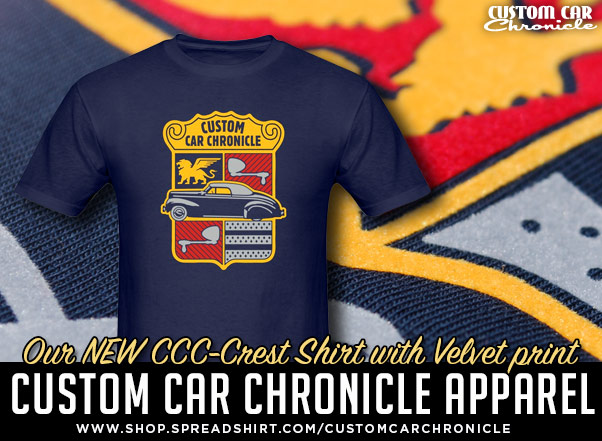