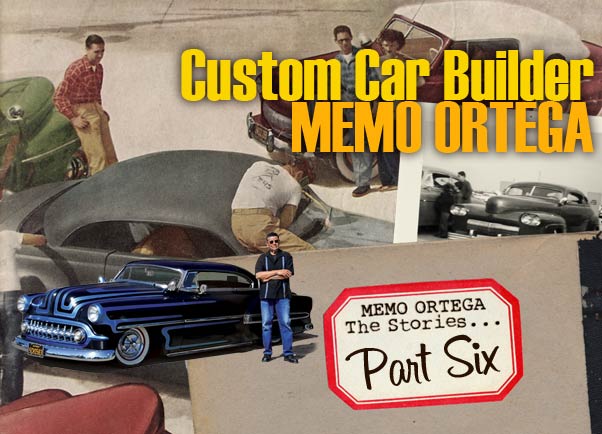 Its late 1950, Memo gets introduced to the Ayala brother, finds out you can use aircraft hydraulics on cars and sells his beloved ’37 Chevy 4-door.

[dropcap]W[/dropcap]e went to the dance hall, me and Papitas an fito on this Friday nite about seven-thirty. The local girls were used to go to the dance hall every Friday. We went in looking cool, like we used to dress. We had our leather jackets, shades an duck tails. We held the wall up, while the other guys and gals danced. We were only there for an hour, when we decided to go and took a cruise 2.nd. st Pomona.
Guess what! When we got to my ’37, we found out somebody had stolen my skirts and spot lites! Yes my Appletons and to add insult, they damaged my vagabond plaque. I never found out who did that. Of course I had an idea who did it, but could not prove it. Well the show must go on. 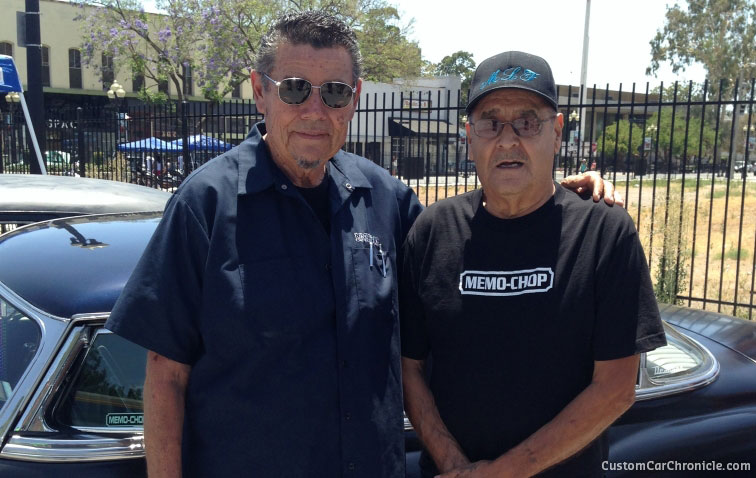 Memo Ortega on the left with Manuel Fuentes aka “Papitas”, his good old friend at the Memo Ortega show in June, 2014.
[divider]

Its late 1950, almost 1951. I am 15, going on 16 yrs old. I wanted to paint my ’37 Chevy, so I took it to kolberts in Pomona. I had seen a car he painted, and liked it a lot. I wanted a dark green metalic, so I had them paint my Chevy. It came out looking really good, just what I wanted. This guy I knew did upholstery. I had him do my car. He did it for a good price. My car really looked good, all most done. I still had to chrome my garnish moldings. I saved more coin to have them chromed way latter, along with my glove box and ash tray. As the time went on I had my motor top valve and side cover chromed. I went to dual points and a hot coil. The car ran good, and with loud pipes… awesome!

I heard of this Chicano guy Victor, lowering cars with aircraft hydraulic rams. I sure was amazed at what this guy Victor was doing to this 46 Chevy Fleetline. Right here in Pomona using aircraft cylinders. I could not believe the mess on had on his driveway, hydraulic oil all over the place. He told us he’s been doing this for awhile on cars. I said we have never seen this before, and somebody told me about him, so we decided we had to see for ourselves. He said don’t mind the mess. He showed us how the hydros worked up and down. We were impressed… WOW, this guy knows his stuff. I had never seen this before. Remember this is 1950! I was really impressed. So we went back home thinking of what we had seen.

Now its 1951 still cruzin all over. I am 16, and having a good time. When my ’37 Chevy had the hood on it, it looked custom car to the max,especially with the skirts on it as well. When I wanted the car to look Hot Rod I would take off the hood, then you could see the chromed engine compartment an triple carburetors. It really looked good both ways.

Back to the cruzin Vagabonds. I used to hear some of them talking about these guys in east LA, the Ayala brothers. When they talked about that shop, it sounded like magic. I always said to myself… Man one of these days I am going there! One Friday night I was cruzin Holt Ave. in Pomona without the hood, and got stopped by the highway patrol. My head lites being to low, the cop said. Cars were cruzin by to see what was going on with me. A bunch of the Pomona Choppers Car Club came over telling the cop… hey he’s not doing nothing wrong, we can’t even be going down the street with out you messing us. Let him go. Well, he still gave me a ticket, they booed him. 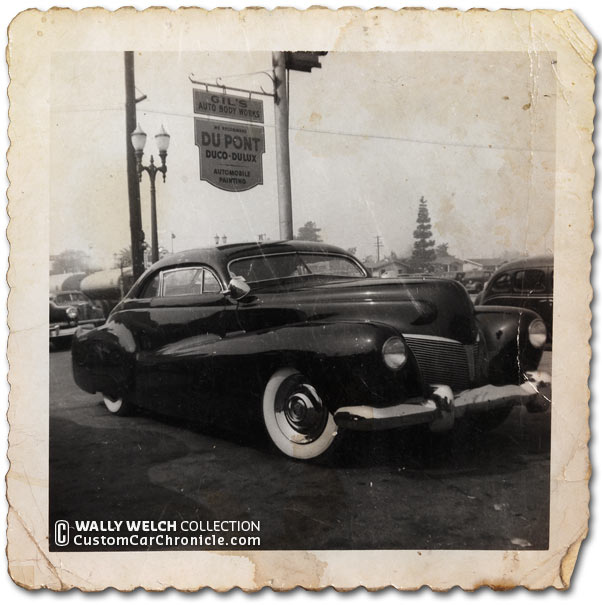 On a Saturday, around twelve afternoon, I asked one of my friends if he wanted to take a cruze to East LA to see if we could find the Ayala’s shop. He said, heck yeah, lets go! We made it to East LA, stopped at this auto repair shop, on 3-rd street, in front of the sheriff’s station, to ask for directions. Funny, they all came out to check out my car. I got a lot of cool car man compliments, one of the guy’s there, knew where the Ayala’s shop was. He gave instructions, we thanked them and left. 2 miles from there, we found the shop on Olympic Blvd. We drove in, and again they all came out to check the car. Let me tell you it sure made me feel proud of my car. This is the first time I met Gil and Al Ayala. They gave me a lot of compliments on my car. Also for me being so young to have such a nice semi custom was a plus for me. That was not the last time for us going there. Funny, I was 16 then and 78 now, and never have stopped rolling thru that place since then. I will never forget that day.

We left the Ayala’s shop rapping my loud pipes. It had been a good day, even thought we lived so far away in La Verne. For the next year and a halve, me, Papitas and Fito kept on cruzin the wheels off my car. That’s the way it was… and still is for me. I was still working at the packing house, when one of my friends came over and told me Matt Kolbert, the owner of Kolberts Body Shop in Pomona wanted to talk to me. My friend asked me to go see him. I went over, and Matt asked me to go work for him. He had noticed the work I had done on my car when he painted the car some time ago. Well, I did go to work for him, and he taught me all about bodywork and leading work. It was great… a chance to learn more since I loved working on cars. We did everything, body work, customizing, painting, you name it. My 37 Chevy was always parked in front of the shop where everybody could see it. I guess that attracted more guys to bring in their cars for custom work. It really worked. Me and Fito went back to the Ayalas and again we had a good time talking to Gil, his brother Al was more quiet. They were always busy, he showed us the House of Chrome. I then got me my new set of Appleton Spotlites there, to replace other ones that had been stolen. He told us to come back again be for we left. I told him we all be back another time, so we left. Another good time at the Ayala’s shop. 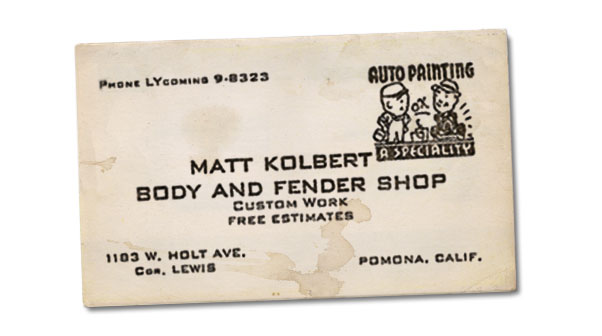 It was still early on this sat afternoon, we headed down Atlantic to check out the Barris Shop in Lynwood we had never been there. We found the place, a nice little place. We walked to where they were working on cars, they had ropes, to keep onlookers like us from crossing over to where they are working. That was a cool idea. One guy came over, said its okay to come closer and see what they are doing. That was cool we looked around and thanked him when we left. We headed back home, just crusin and having a good time. We never did go back to the Barris shop after that first time visit.

Its now, 1953 and I am 18-yrs old. Still working at Kolbert’s. This guy wants to buy my ’37. I’am having a hard time deciding… after a while I gave in, and sold the car. I sold it to Dick Akeery of San Dimas Ca, he continued to have a lot of fun with  the car. He used to irritate his neighbor with the loud pipes. What he would do is, park the ’37 by his neighbors window and rapp the loud pipes as loud as he could an take off, talking about pissing off somebody… he sure did. After that I’ve never seen the ’37 again.
Let me tell you that car hunted me in my dreams! I allways dreamed it was in our back yard… I would get up to see if it was there… nope, it was not there, just a dream. That’s the honest truth. Sad thing about all this, I never was one to take photos. Now I can kick myself for not taking any back then. Next time… my 51 fleetline. 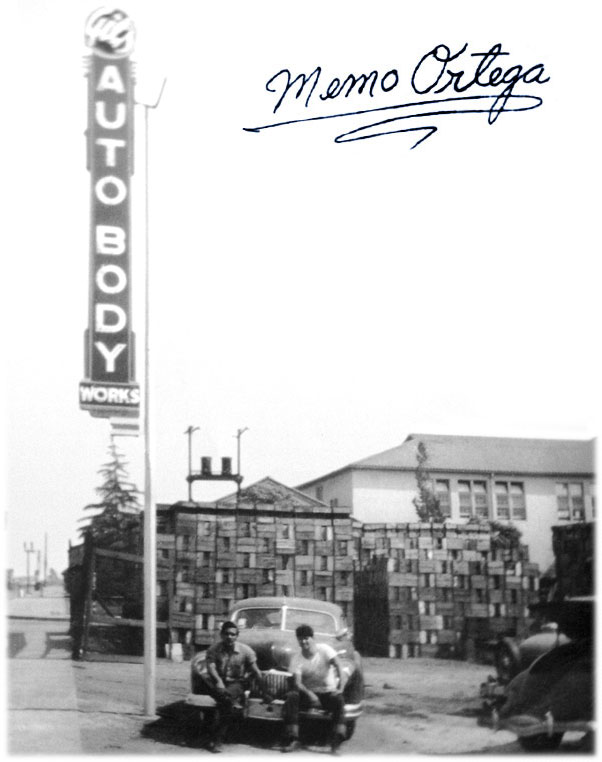 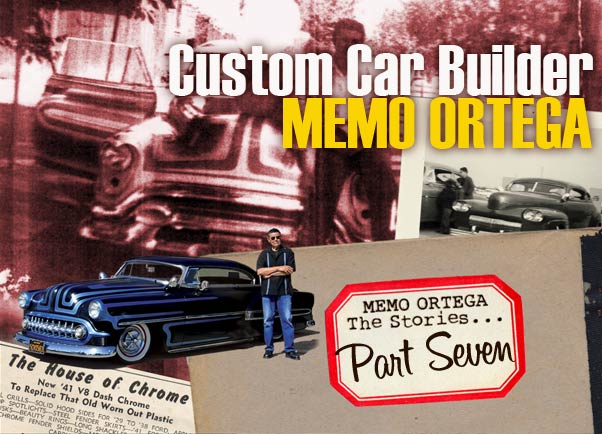 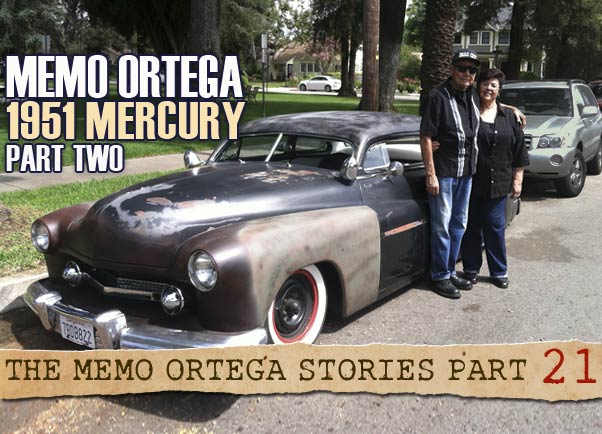 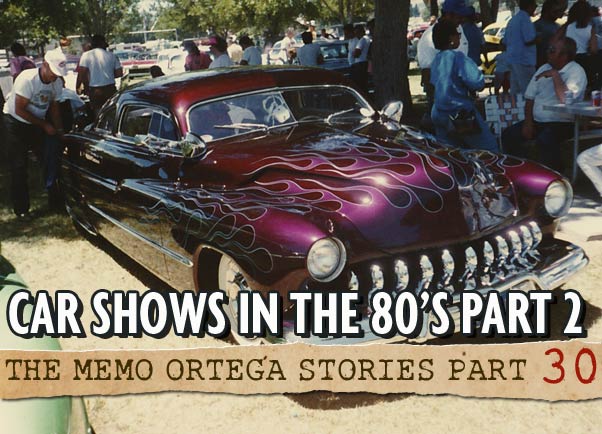