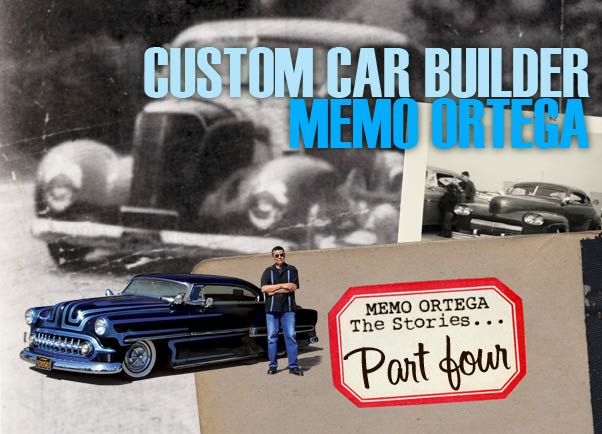 We have now landed in 1949, and Memo is about to get his first car, an experience which would change his life for-ever.

Another one. It’s Janury 1949 and I’m gonna be 14 yr’s old. I have my eye on this ’29 model A roadster. Im working what ever job I can get, I want that car bad. Went over and talked to Sabino Lopez, the owner. He came out of the army a couple of years before an he had the car parked not in use. I knew the family and him, so I asked him if he would sell the model A to me. He said yeah sure, its just sitting there. What are you going to do with it. I will fix up little by little at a time. I will drive it when I get my drivers lic. Well, tell you what give me 20 dollars for it, and you can pay me even in payments. Wow, I said ok I’ll take it when I pay for it. Boy I was a happy kid.
I got it home after some time… man did I have plans for it! But it did not happen, my dad came by an asked whats that! I said its my new car. And what are you going to do with it. Well I am gonna built me a hot rod, like Hernandez up the street with no fenders. Oh no your not! Those guys are racing out there on the streets and getting in trouble with the law. But.. but I said. No you take that thing back. So I did, I told Sabino what happened, he gave me my money back said its ok.

My mom got mad at my dad, an told him he’s a good kid, he works his butt off to buy his things. At his age you should be proud of him! She told me in front of him you go find a car you like, I will sign for it. Dad did not say a thing at all. At this time Panya, my cousin went and got himself a new black ’49 Mercury that had just come out. And right away he gave it the custom treatment, a true Cruzer that he was. He filled-in the hood and trunk, and door handles. Added a new set of Appletons, and of course he lowered the suspension and hung his plaque. A mean looking merc. It was the first one where I lived in my section of town. 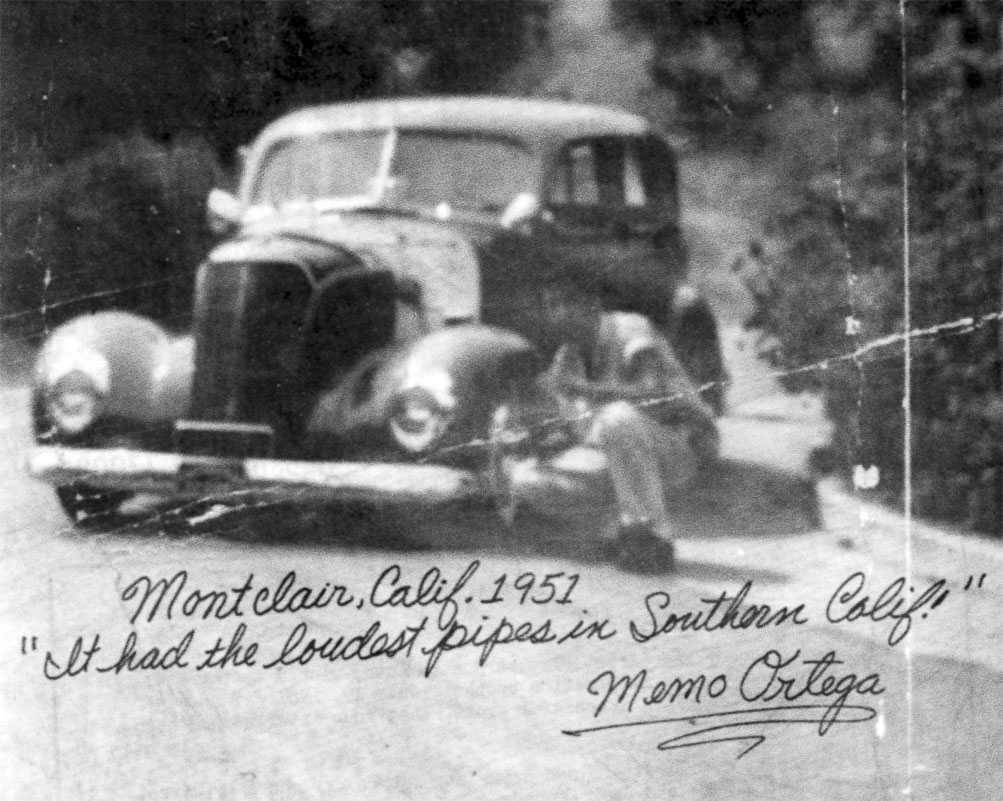 This is the only photo of the ’37 Memo has left. A fuzzy snapshot from 1951. A young Memo kneels next to his pride and joy.
[divider]

Back to me buying a car. We found one in Ontairio, it was love at first sight, it was a cherry ’37 Chevy 4-dr, dark blue. We did the deal and one of our friends drove it home for me, since I was only 14 and I did not have a lic. The car cost one hundred and 87 dollars, to me this was a lot of money, but I paid for it on easy payments. My mom told me, you do what you want to with the car, it’s yours, he (dad) has nothing to say about it.
All right I’am gonna customized it… That was my green lite. I just had to have a car like Enshilada’s ’37… I had no money to spare, so I made me some lowering blocks from a hardwood 2 x 6. I drilled them an pinned them, had some u bolts made by my friends at the foundry. Man I had a my first taildragger, I still could not drive, so I was going to keep working on my 37. Hey, I wanted a cruzer… so  I’m gonna have one, my 371

After lowering the back on my ’37, I pulled off my tail lites, went to the bone yard an got me a set of ’40 Studebaker tail lites. I used the ruber gasket as a templet… worked perfect. I drilled the mounting holes and got them on the car…  not bad looking! If only I knew what the future held for me with cars. I never took photos of my cars an manny others I customized in the beginning, but I got a few from latter on. Back to my ’37, Its 1949… I decided whats next. I painted my rims red, like the other Cruzers, it realy looked cool. Since I did not have money to spare for real white walls I went to Western Auto, and got some white wall paint, and painted my tires. They came out looking super cool. I became friends with… Enshelada… and he helped me with some extra fender-skirts he had. So now I had teardrop skirts. Its coming along fine. The other guys, a year older than me did not even have a car yet. So I was very lucky to have one.

New Headlights for the Chevy

By now I am getting close to be… 15 yr’s old… I decided to remove my head lites an get me ’40 Ford head lites. I wanted to be deferent, and I liked how they looked on the ’40 Fords. I found the whole units at the bone yard. To cut the holes for the lites was a little hard, but in the end I got them on. It took me a little time with a drill and a hack saw and a file of course. Since I did not have to many tools in the old garage. I’m telling you... when I was done, it looked really mean. I liked it. But now I still had a bunch of holes where I took off the Chevy head lites. Not having any way to weld the holes myself, I went and put black primerd masking tape to cover the holes, for now this looked way better. 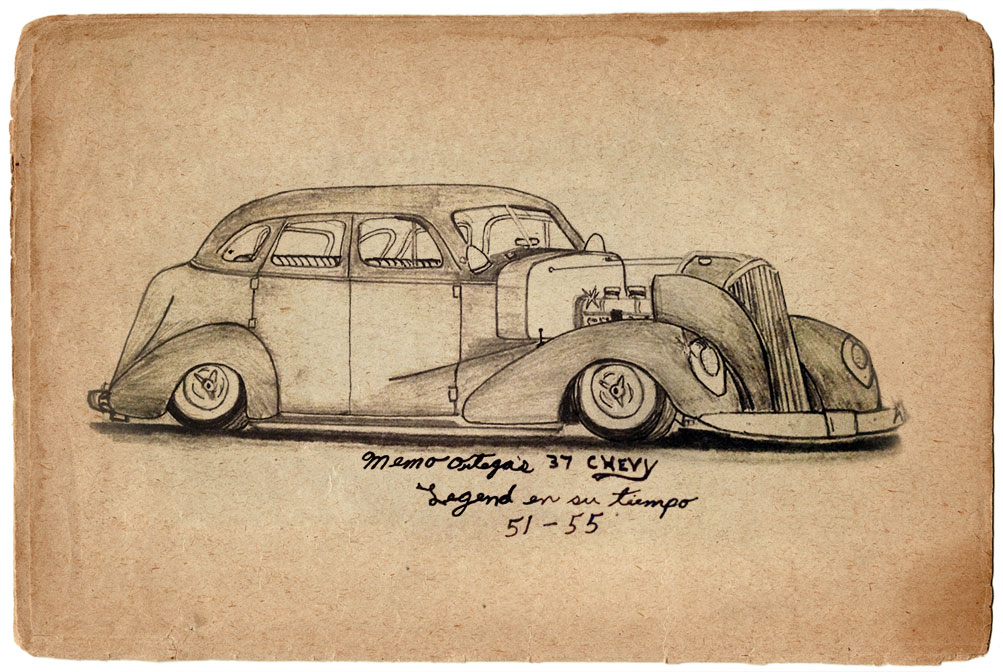 Hey I was a happy guy. I also got me a Vagabond plaque from the Cruzers they liked what I was doing. The guys my age coind me mr..Kustom. I did not like that but thats what they called me. I just turned… 15 yr’s old, its… 1950… and Enshelada just got a 1950 Merc. 2 dr sedan. He got down to work on the car right away… will tell you more on that later. I just got my drivers lic. my dad had to signed for me. Wow now I can drive and I did! It was so cool driving my own cruzer.
I got back to working on my car. I decided I wanted a car lower than the ones running around in the neighborhood, so I pulled my front an back seats out… Little did I know that latter on in the mid fifties I would be lowering a lot of cars in the Pomona Valley area. Anyway I got rid of the rug also. I am gonna tunnel this baby. My friends thougth it was crazy. I marked and started to cut. You would not belive how I did this. With a hammer and chisel and hack-saw, the poor kids way like I said I, was self teaching, caused me a lot of head ache. But I was determend to do this. So I also pulled the wheels off and marked my frame at the back. No torch to cut the frame. So I drilled and used the hack saw. I did it, I noched the frame, man that was a lot of sweat but it was done! I needed some metal for my drive shaft tunnel. Our neighbor had some 5 gallon metal buckets, he gave them to me. I cut them up an used them for this. I used sheet metal screws on the floor. I did it! It did lay the car lower. I also figured out how to lower the front on this car. The Chevy had a “knee action” front end. Nobody, that I knew, had done this before. From what I know I was the first one to do this type of front end. The car sat real low front an back. More on this in the next article. 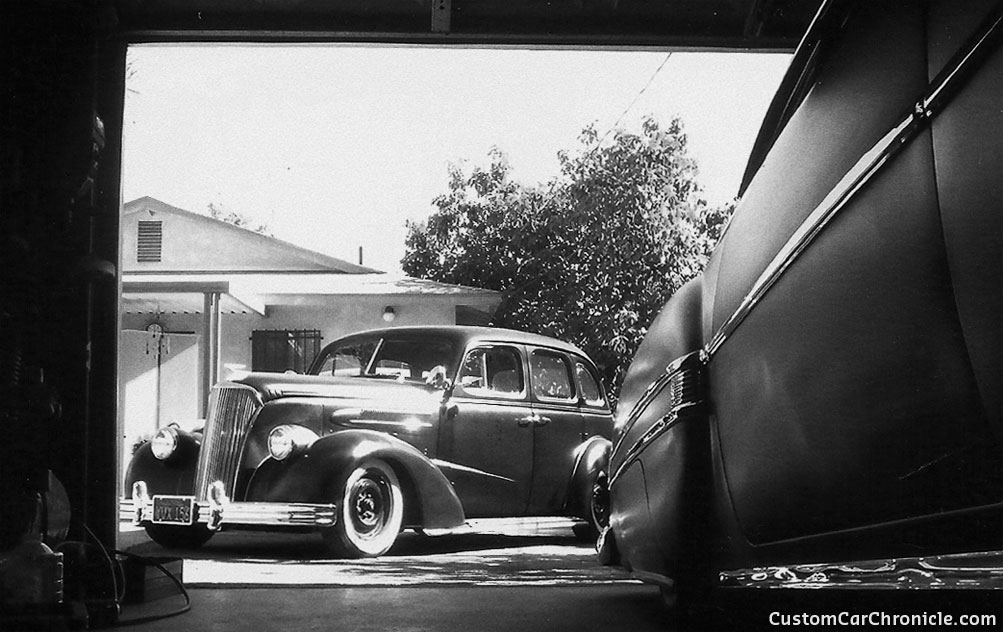 Later in his life Memo owned another ’37 Chevy 4-door. Also mildly customized, but different than his first car.
[divider] 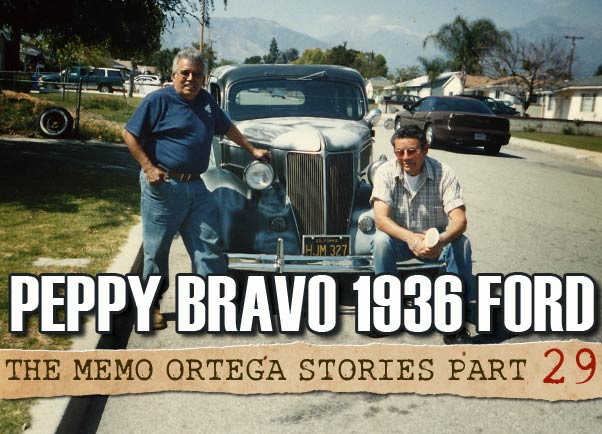 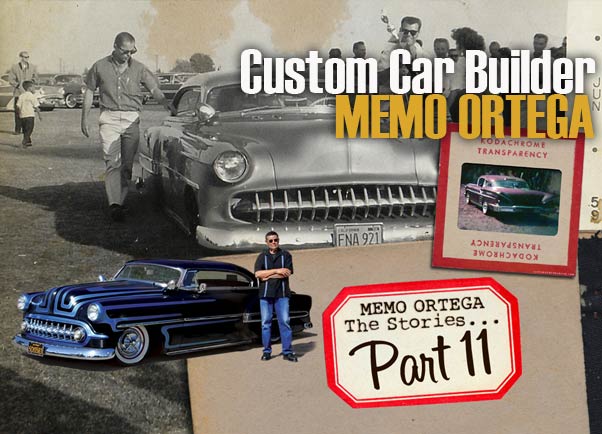 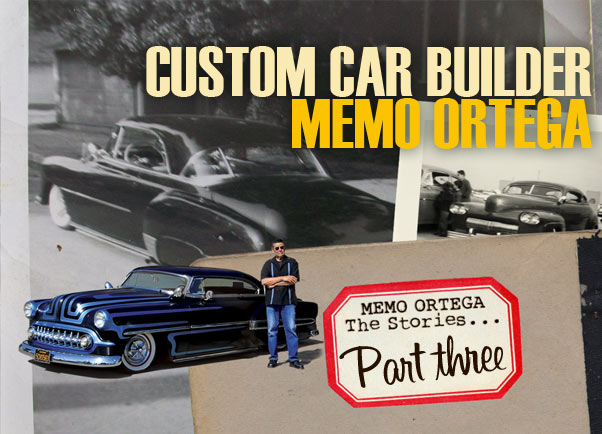