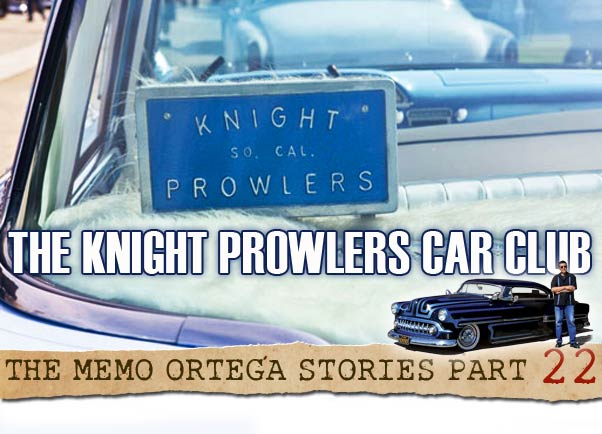 [box_light]Memo Ortega is a well known name in the SoCal Custom Car and LowRider Scene, but perhaps not as well known as it should be. Memo has been working on custom cars and Low Riders since the early 1950’s. He became good friends with Custom Car Icon Gil Ayala, and in the late 1950’s he even bought Gil’s famous 1942-46 Ford Coupe as a persona driver. Today, in 2015, 80 years young, Memo is still chopping tops, and any other custom car work you can think of from, his garage work-shop. Check out more of the Memo Ortega Stories in the Memo Ortega Files on the CCC[/box_light]

In the summer of 1985 me and Richard Mendez were sitting by my garage. I was taking a break from working on one of the guys cars, I told Richard I had been thinking of starting a small car club. I asked him “what do you think…” hmm sounds cool, he said… what would you call it… “I’ve been thinking… The Wonderers or Knight Prowlers “what do ya think…” you know what, either name would be bitchin… “The reason I like both these names is, because we are always out there cruzing the blvds… you know its what we do right!.. Yeah your right on that Memo,… 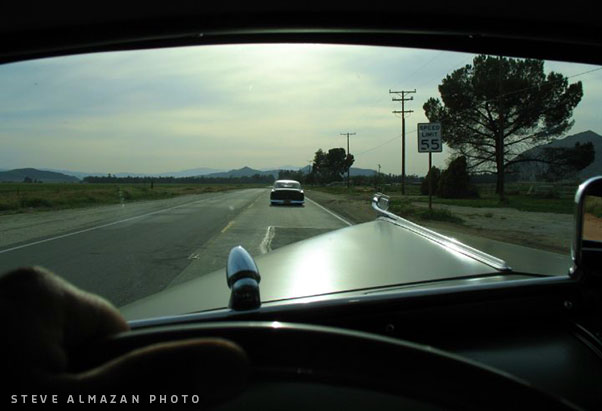 Remember the other night we where cruzin Pacific Coast highway at night, and we stopped off Bellflower blvd. to buy some soda’s and potato chips. This guy saw us coming and parking in the lot… he came over and said “man you guys and your cars are looking so cool!” and he asked us “where are you guys from…?” We told him we live way out there by the Pomona Fairgrounds… “Man and you come cruzin way out here…? man thats real far, just to cruze…” Well yeah, thats what we love to do, we told the guy… “By the way – the guy said – we are having a cruise-night next door. You guys are welcome to come over, it goes on for another hour till 11.pm.” We told him thanks, but we got a lot of cruzin to do, thats our thing, so we left. 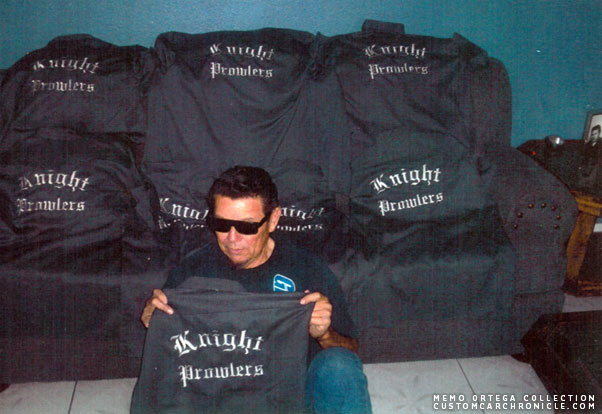 Well, we decided to call ourselfs Knight Prowlers, Richard Mendez, Jeff Roberts, mr. Jim White, Rick Trujillo, Phill Ortega, the twins Mike and Jesse… and me Memo. We decided we needed some matching jackets. So one of the guys drew up the Knight Prowlers and we all got a black with white Knight Prowlers logo on it. Then we also made some aluminum club plaques, no car club without the typical club plaque to install on our club-cars. After a while we figured we should also start doing some car shows. 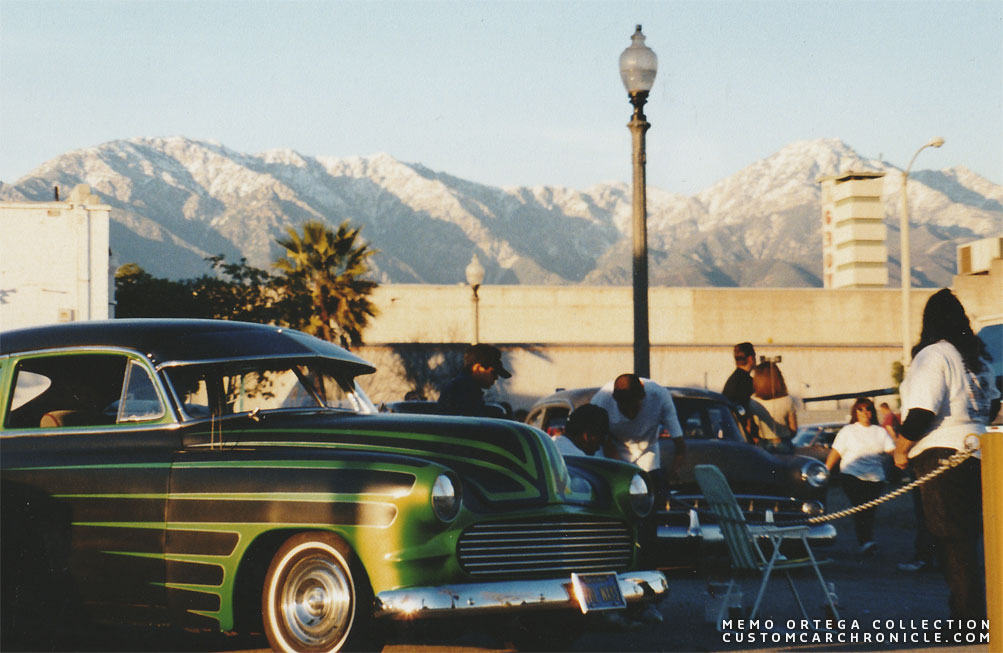 One of our shows at Boomers, man I’m telling you we had the best D.J, in the area. He played every 50’s rock & roll song you wanted to hear. He could imitate Wolf any time he wanted. In my book the Ruble King was it! We had guys an chicks dancing the nite away to the cool 50’s sounds… thats who we are.
[divider] 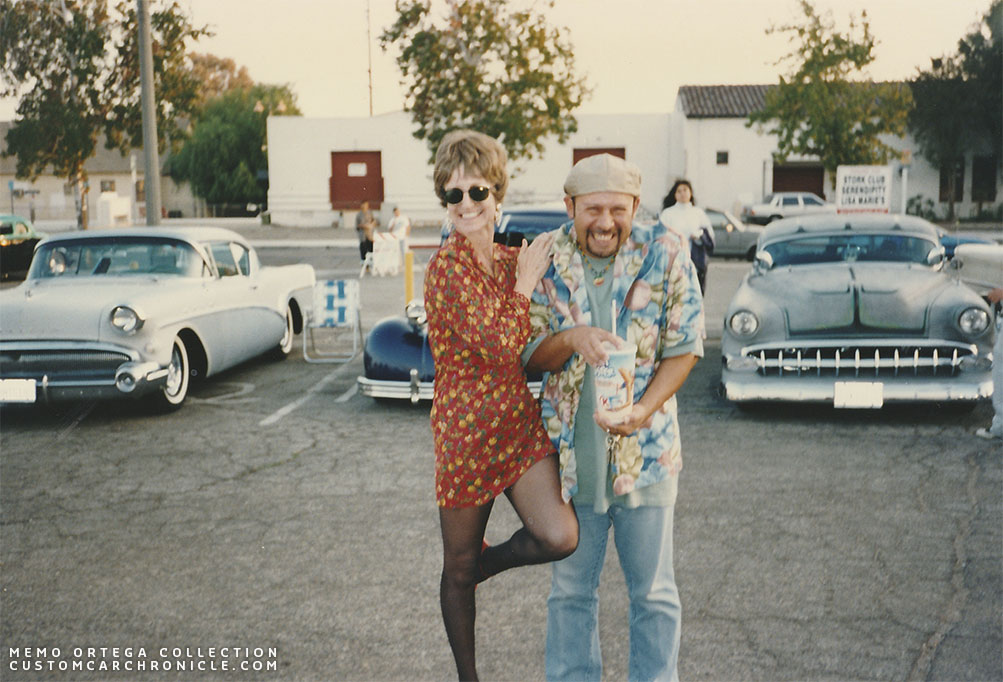 Joy, Tom’s wife and Rick Trujillo messing around. They were always there for us. In the back ground my brothers Phill Ortega’s 1957 cool Buick, our ’37 Chevy behind Joy and Rick, and Jeff Robert’s 1954Chevy.
[divider] 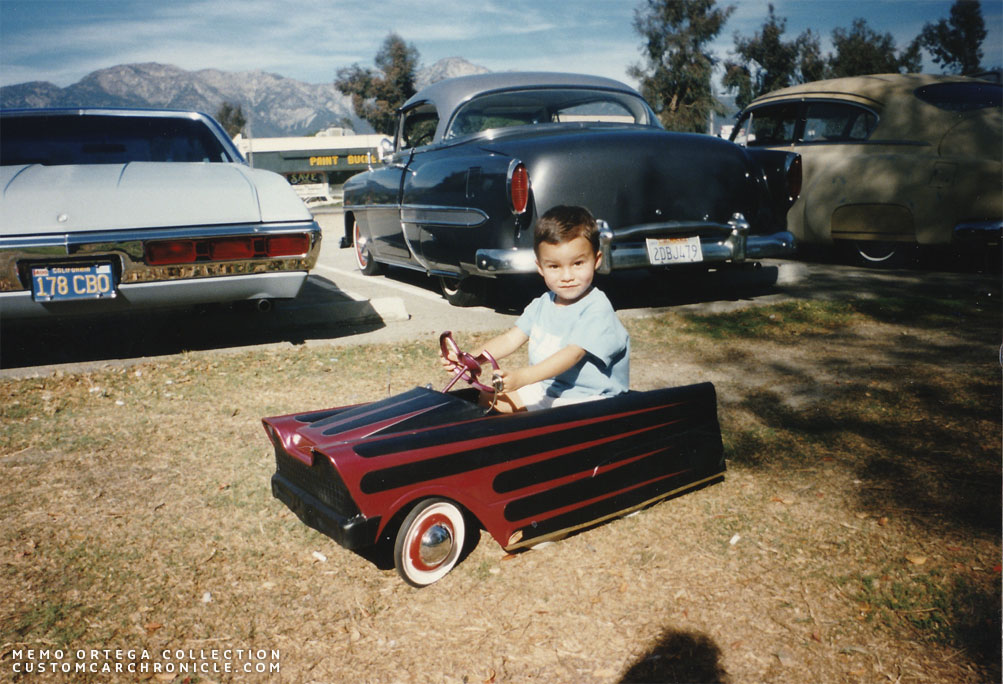 One of our get together’s in 1996. A birthday party for young James Roberts. Everybody was having fun, a young Steve Almazan jr, with his first custom
[divider] 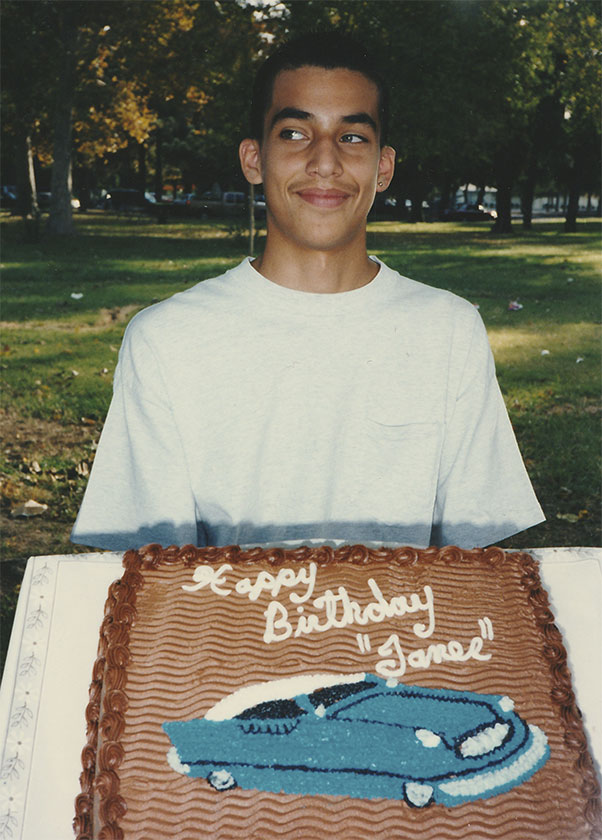 Young James Roberts, celebrating his birthday that day at the Knight Prowlers get together… he had a great day!
[divider]

So we started having a cruze night show every 3rd Saturday of the month. Behind Boomers Upland, which was ran by our friend Russell. The best guy you get to know by the old grove theather in Upland Ca. The shows went really well for quiet awhile. Every show drew more cars than we had before. We started to give out a few small trophies, just for fun. Well, we started getting newcomers, it was good, but then some of the newcomers would come by the D.J and wanted to know what time are you guys giving out the trophies. That happened a lot,  it got so annoying, that we decide to ask people before they would get into the show “do you come over to get a trophy, or to have fun, becuase if your here just for a trophy, this is not a car show for you. We throwe this shows for all of us that want to have fun! We did not sound to be rude, but sometimes you have too be clear with what you want. Well we finally got fed up with that crap, so we gave up.

A lot of our followers wanted us to continue, we said “no more!” We should have never started giving out trophies! We were doing real good before that, everybody would come just to have a nice time with their cars and great people, in the first place, then we never had that problem. 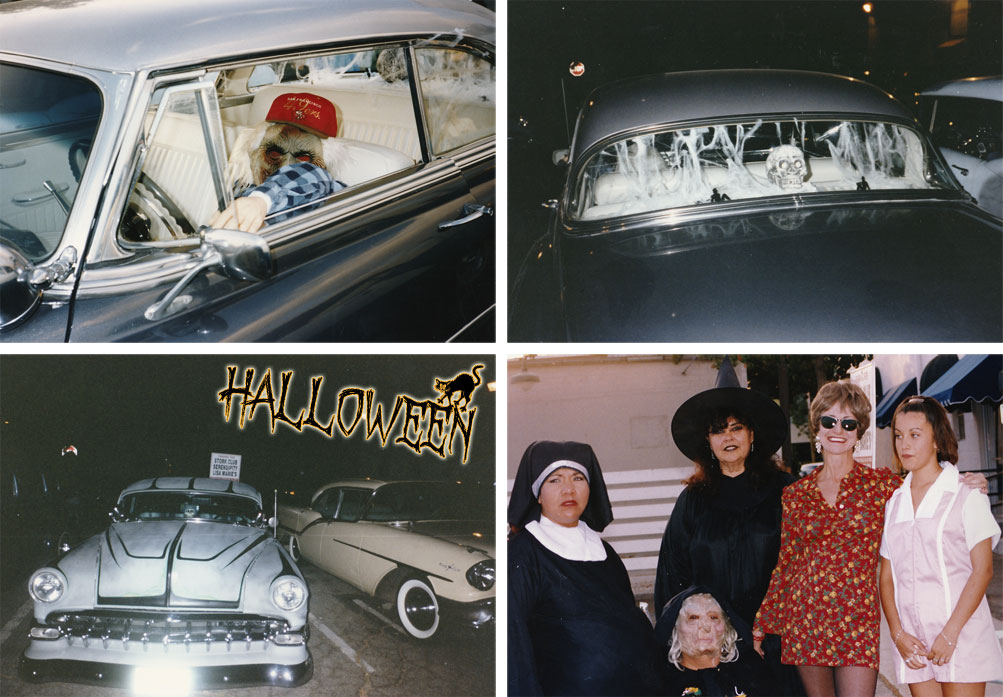 Halloween party at one of our car shows at Boomers. My wife Terry’s 1953 Chevy all decorated, she did an awesome job. Jeff’s Chevy in the lower left photo looked also very kool. The gals did an awesome job themselves also. Left to right; Francis the nun, Terry the witch, Joy, as allways herself, Lena the nurse, and sitting down Josie. It sure turned out great. Everybody that came out to our Halloween party and car show had a great time we gave out a lot of candy for the kids and grown ups that night.
[divider]

After we stopped having our shows at Boomers, we were invited to have a couple of other shows at Hamburger Haven a couple of miles west from Boomers. We decided to have the Knight Prowlers first Toys for Tots Christmas Show there. Well it turned out a success, except nobody wanted to be Santa!!! Well guess who ended being Santa Clause… Thats right, me Memo. At first I din’t want to, but I knew somebody had to do it… so I did it. And it turned out to be a lot of fun. Seeing the smille on these kids was so well worth it. 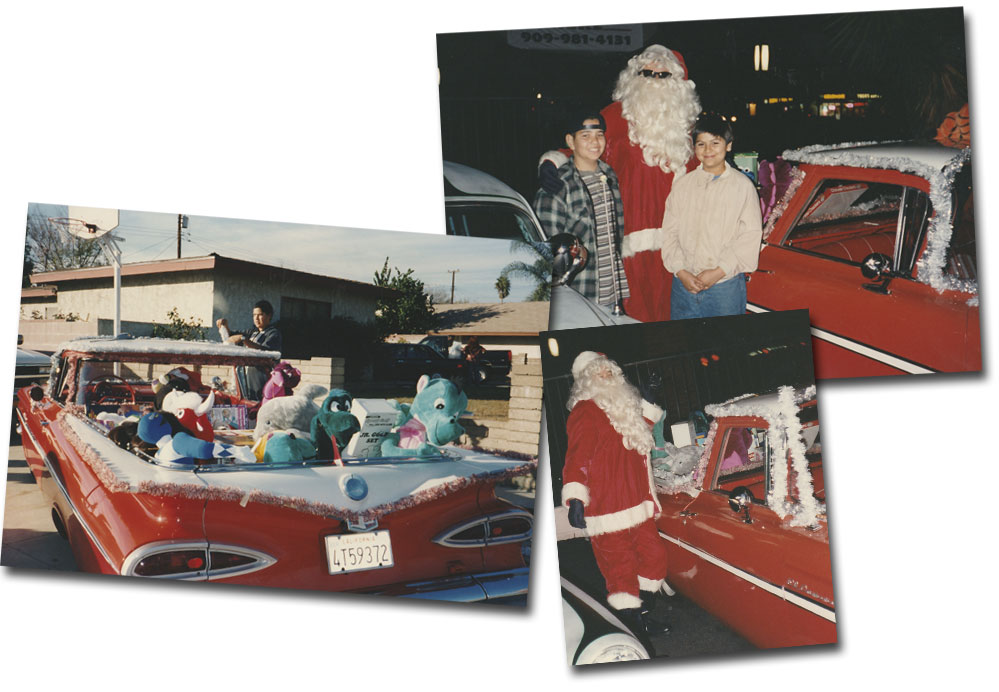 The Santa Memo. We used Benny’s 1959 El-Camino to haul all the Christmas presents for the kids. That’s Anthony in the left photos and Marcos and Johathen standing with Santa Memo.
[divider]

We had our faboules D.J the Rumble King, spinning out his 50’s rock an roll spitting out records after records an keeping the place jumping, we also had best 50.s costumes. After that we had a couple of more shows at Grinder Haven in Ontario Ca., after that we gave up throwing shows. Jeff Roberts, mr White, Jim White… Richard Mendez, did a lot of work getting these places to have our Knight Prowlers shows, I salute to them.

Our club, the Knight Prowlers, was and is not about you attending club-mettings or paying monthly dues. It was about guys having fun with our Custom Cars, and cruzin around. That’s what it was and is, and always will be. Nowadays, we ask anybody if they want to go cruising…. if not its ok, we will still have lots of fun. We still keep on going what we love to do, still rolling down the blvds and our younger guys coming on board as they keep on growing up.

The Knight Prowlers we are everybody’s friends

The Knight Prowlers were allways going somewhere.
This time in 1997, we went to the Hootenanny, a Custom Car get together in Orange County Ca. We got there early, good thing cause later on it got so full, no more cars were allowed to get in. The place has a nice little lake in the middle of the small place. We had an awesome time that day. The rockabilly bands out did themselfs, every body dancing like there was no tomorrow, the place was jumping all day to the awesome tunes, we got to meet a lot of kool cats that wanted to meet the Knight Prowlers, we made a lot of new friends how kool is that. 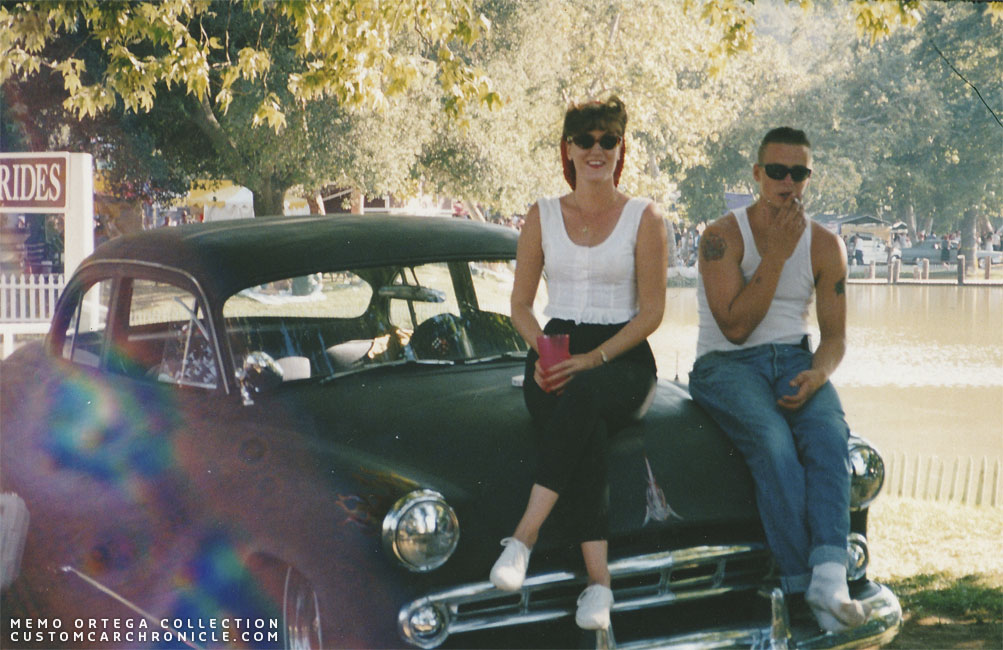 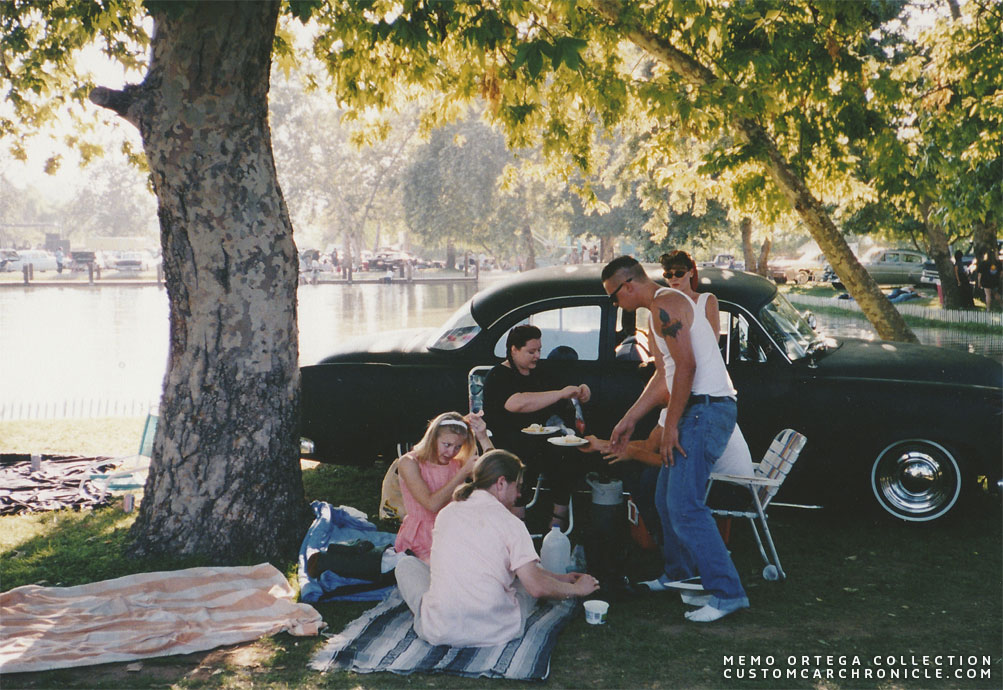 Get togethers like these are so much fun, the whole family is there, and we are having good food and we are all jut having a great time.
[divider] 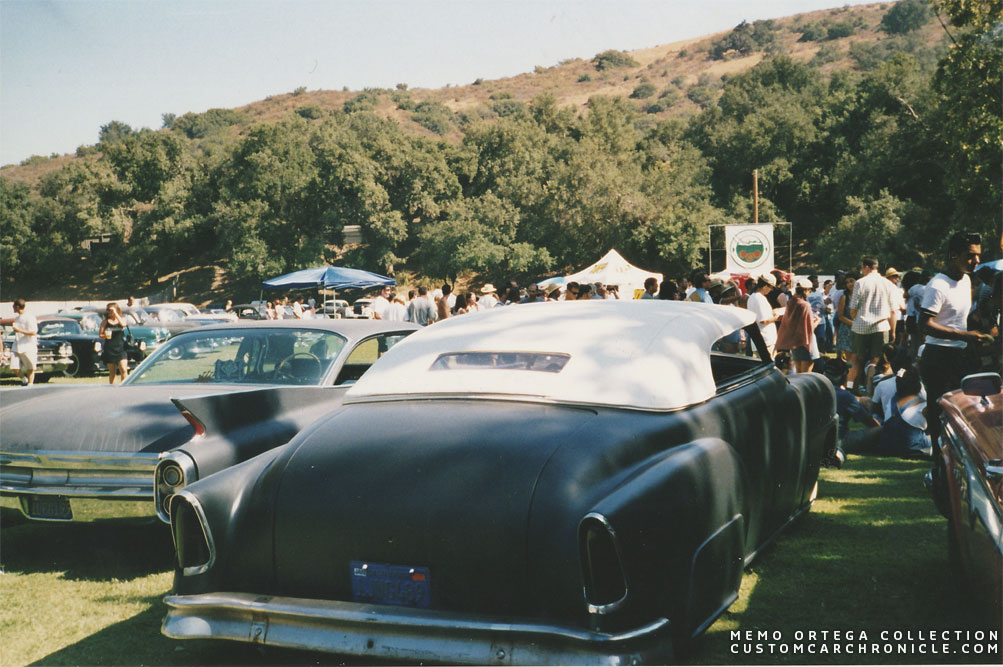 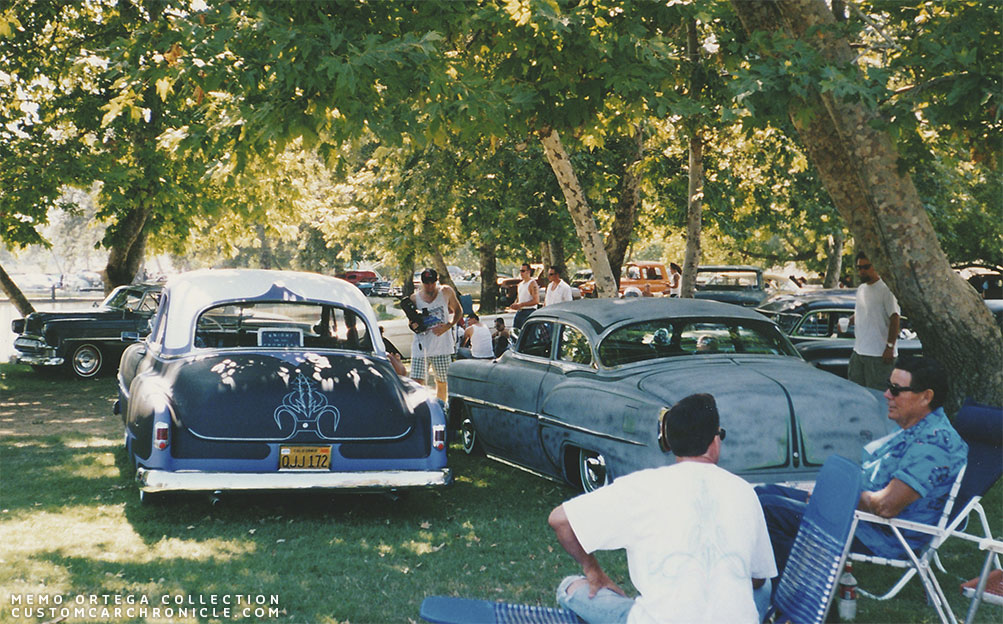 Me and Jeff shooting the bull by our cars. 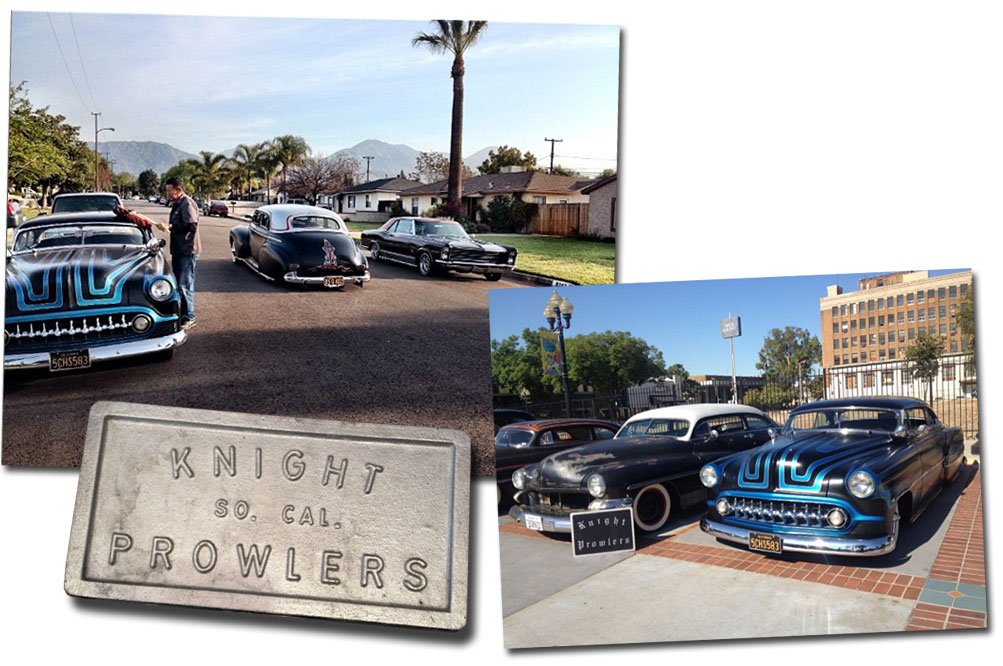 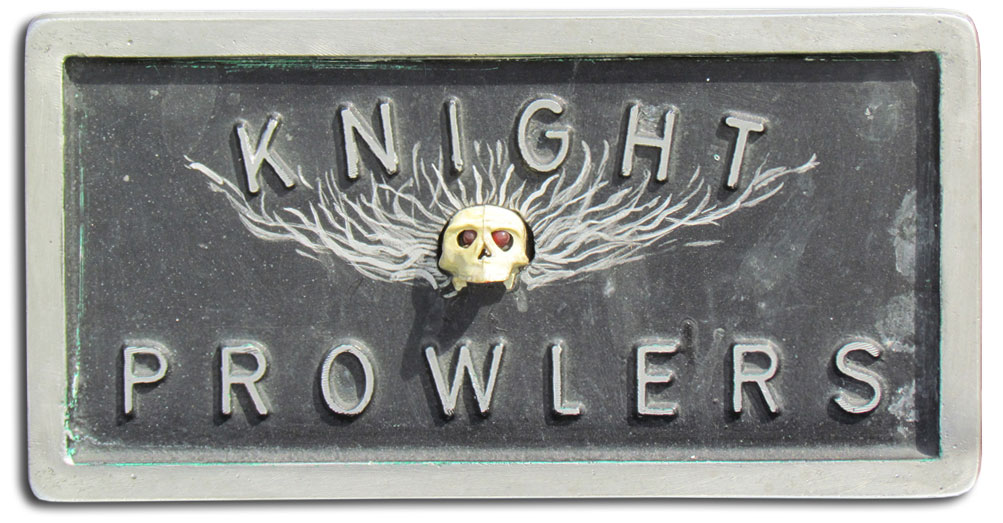 Richard Mendez dressed up the Knight Prowlers plaque on his 1950 Chevy with a 3-D skull.
[divider] 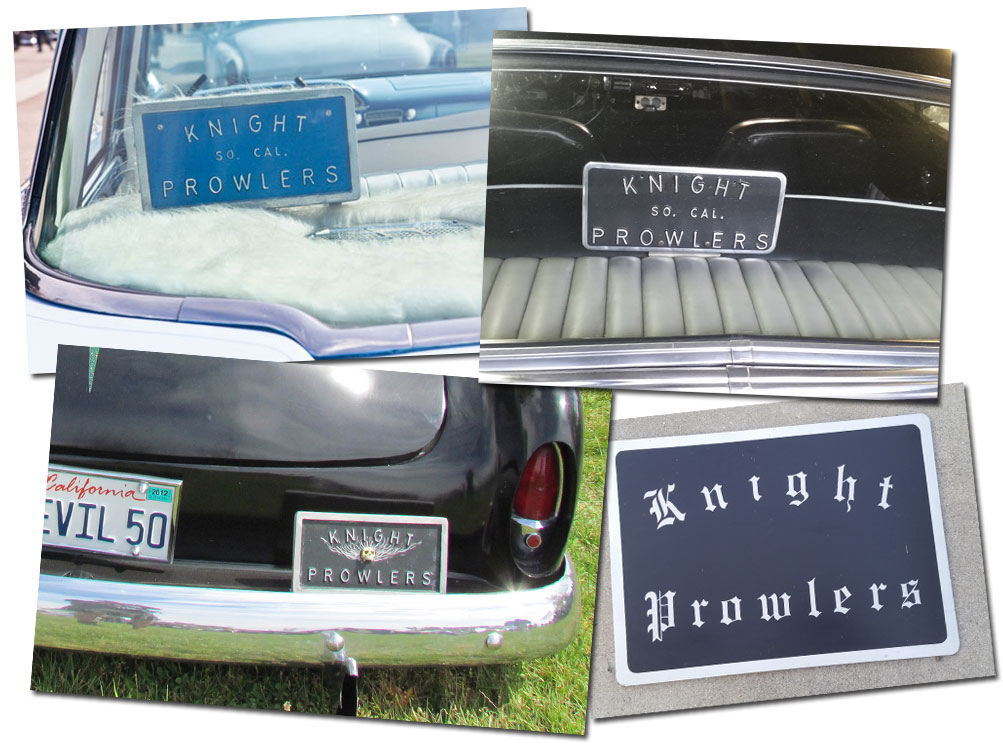 Some of the Knight Prowler Club plaques and large club sign we made.
[divider]

Steve Almazan took these photos of the Knight Prowlers at the 2010 Hippy Killer Hoedown show in Perris, CA.
[divider]

The Members of the Knight Prowlers are: 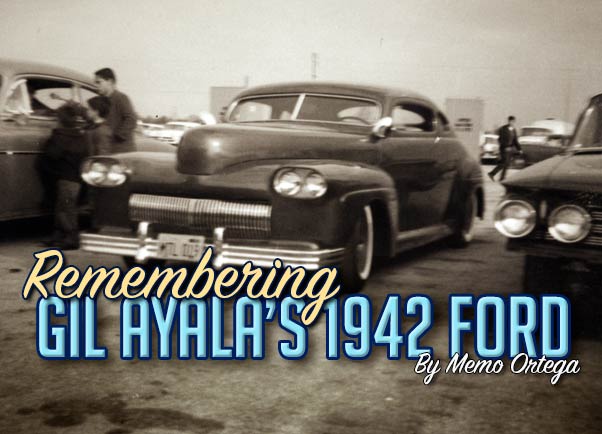 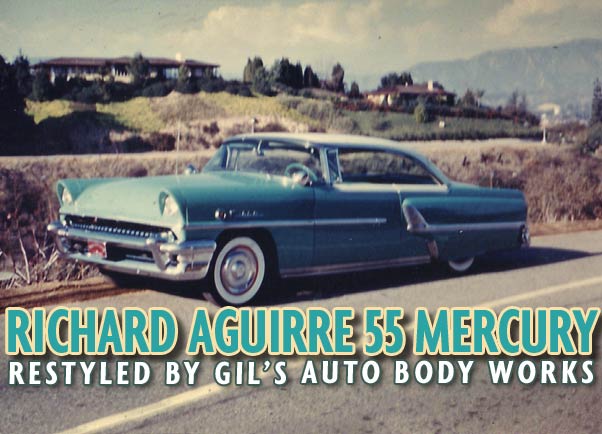 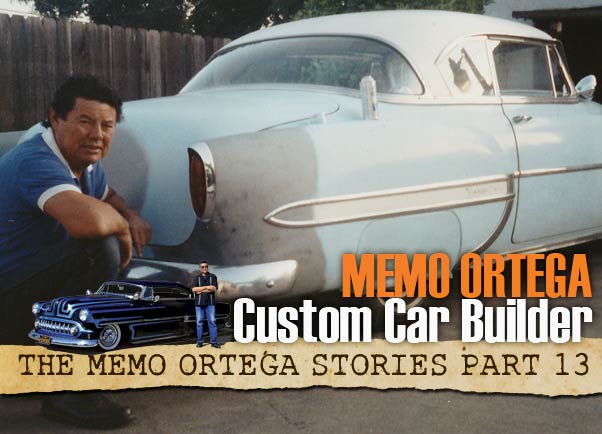