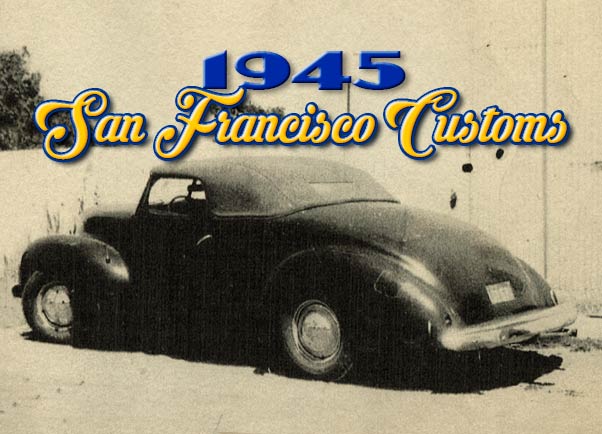 Northern California had a very active Custom Car Scene back in the 1940s. Bruce Heather shared some photos of unequally Restyled Nor-Cal Customs from 1945 with us.

Bruce Heather shared some really interesting pictures of Early Customs from his Collection with us. The photos was all taken around 1945 in San Francisco, and where given to Bruce by Harry Costa. Harry Coast is the owner of a channeled, chopped and padded topped 1941 Ford with raised fenders that has been a show winner in the California Bay era since the mid 1950’s. Harry still owns the car in 2018.

The Custom Car in Nor California, and around the Sacramento and San Francisco, Bay area has been together with So-Cal a very important place in the history of the Custom Car. Southern California, and especially Los Angeles was perhaps the best known area for Custom Restyling. The better weather had a lot to do with this, plus the fact that the early car magazines were mostly published from Los Angeles, therefor it made perfect sense to feature mostly local cars. These So-Cal Customs were perhaps of that better documented, more photographed than in other places.

Nothern California did house some of the very best Custom Builders. Harry Westergard, Les Crane, Dick Bertolucci, Hall Auto Tops, and George and Sam Barris came from there before they moved to Los Angeles during WWII. All these fine creative builders in Northern California had a huge impact on the scene, and in the last couple of years more and more pictures from this Nor-Cal Scene have surfaced. 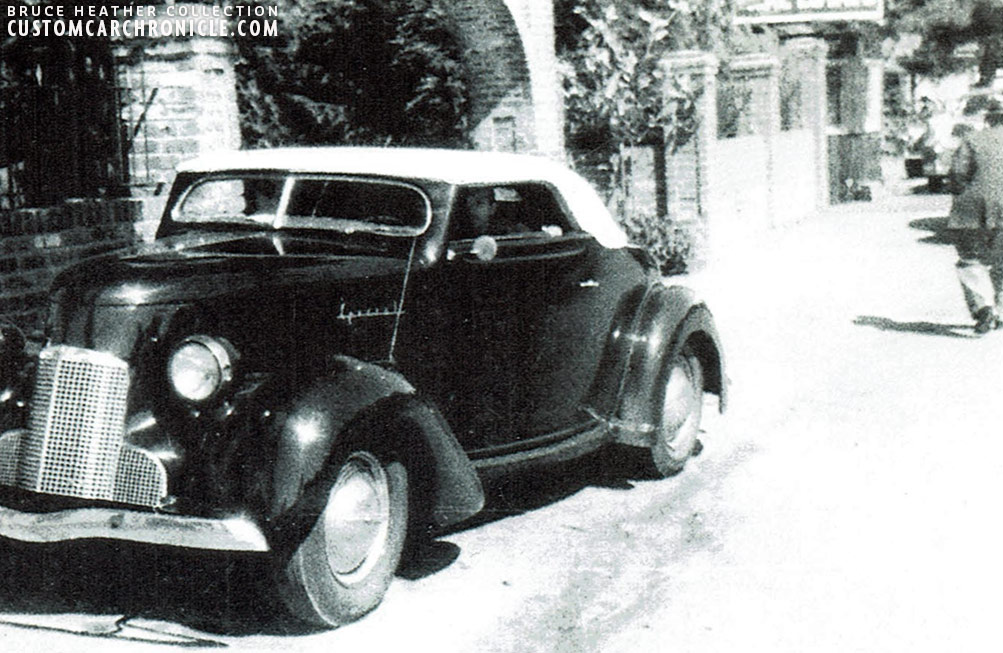 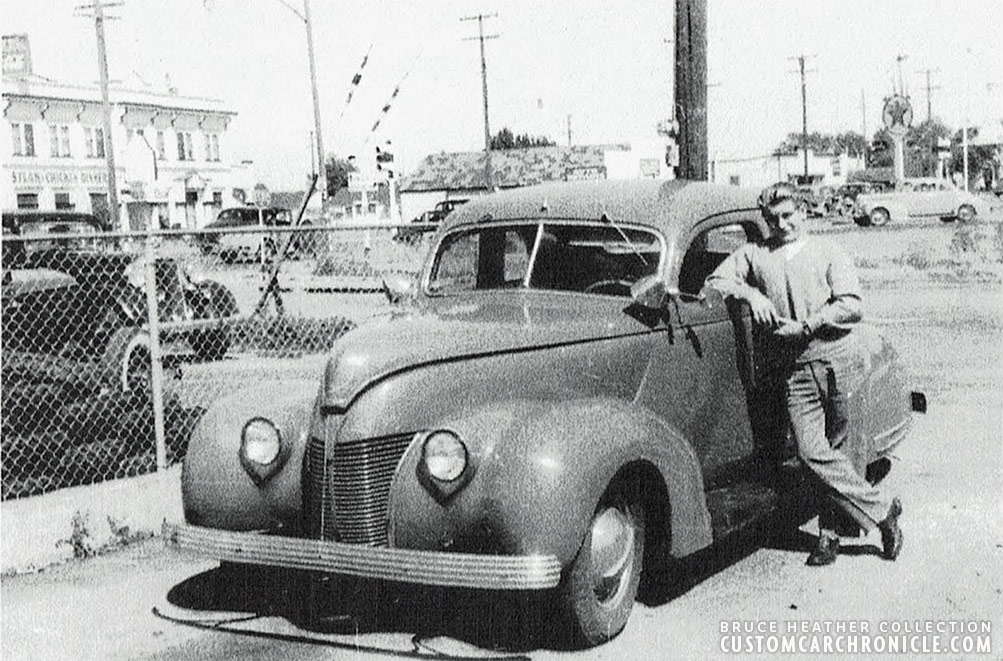 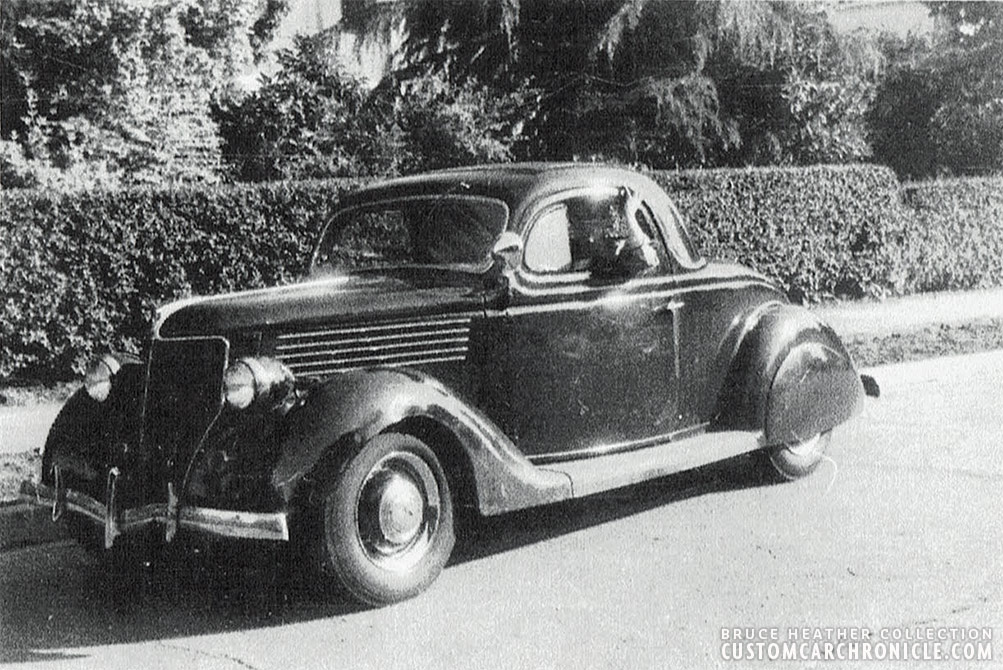 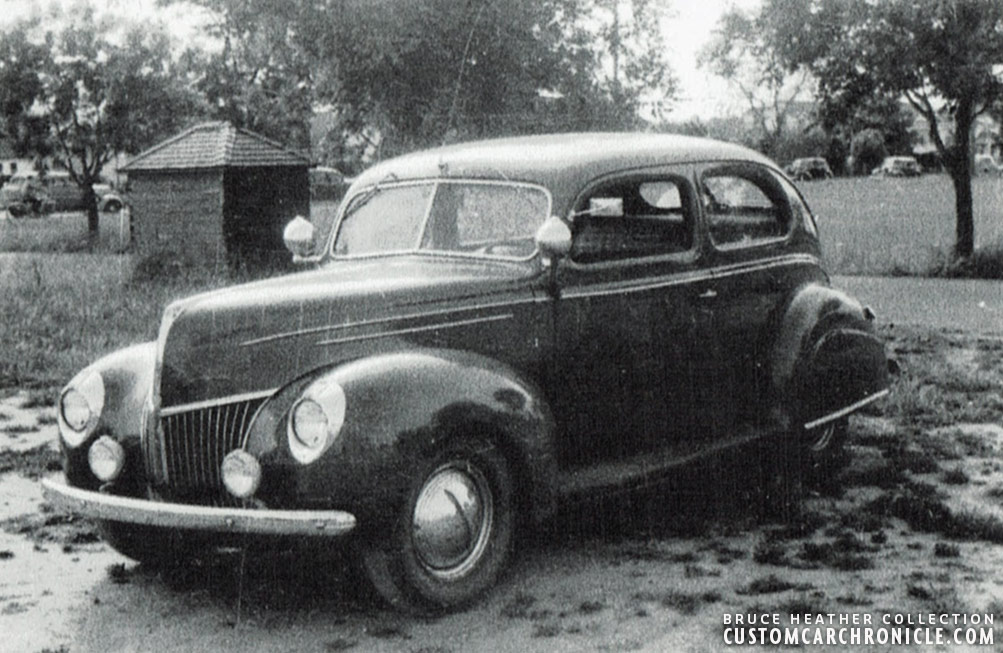 Last photo is another very mild street Custom. This time based on a ’39 Ford Sedan with what look like ’41 Buick skirts, pointed forward Spotlights and single bar flipper hubcaps.
[divider]

There were four photos of the same 1939 Ford Convertible in the collection Bruce received from Harry. A very interesting Custom, with a lot of Custom Restyling and and a lot of body work. Most of the Customs created in the early to mid 1940’s were rather mild, with minimal amount of body work to get the right result. But there were a few exceptions that might have set the bar for the future generation of Custom Cars. We know that Harry Westergard created some heavy body worked customs in the early-mid 1940’s. George Barris was very much influenced by what Westergard did, so he took the heavy restyling style to Los Angeles. This ’39 Ford however is restyled by an unknown body shop or Customizer, in a way that shows whoever created it sure had some sense of styling, and creativity. 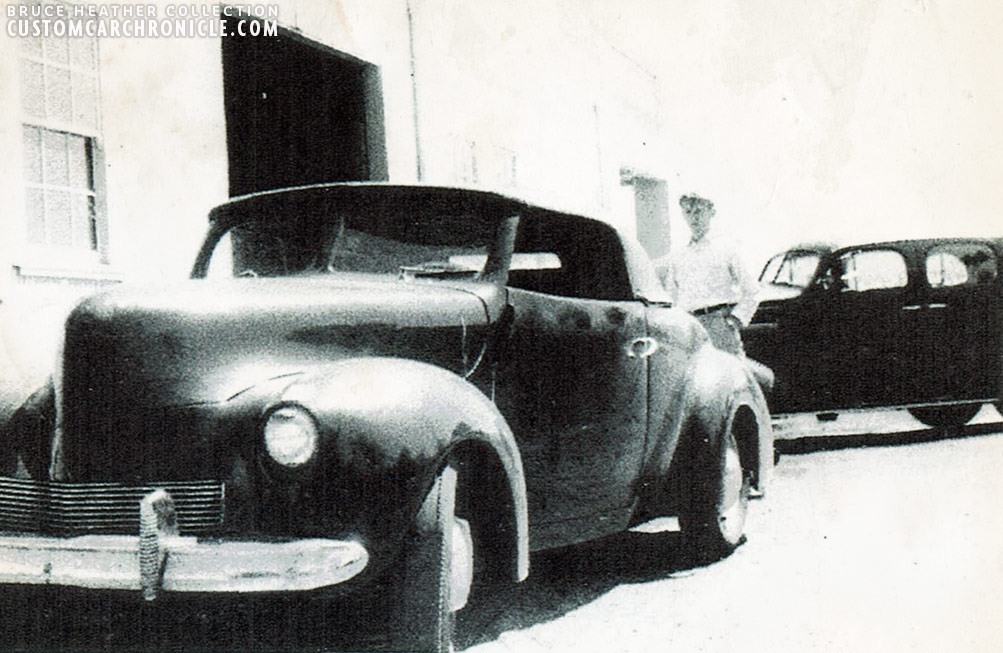 Front 3/4 view shows the removal of the running boards and special below the body panel to hide the frame rails.
[divider]

The whole body is smoothed in a very unique way. The complete belt line has been filled in from the hood all the way to the back of the car. The fenders have been molded to the body, the running boards have been removed and the fenders extended down to fill the section where the running board used to be. A filler panel was created to fit under the body to hide the frame rails. The stock grille was removed and a filler piece created that would allow a bottom section of a 1940 Dodge grille to be installed. he headlights were replaced by body color painted 1940 Ford units.

The windshield frame was chopped a few inches, and a medium colored padded top with very nice flowing lines added.  The flowing lines of the padded top make me feel that the tom might have been done by Hall of Oakland. The two part stock hood was welded solid and completely smoothed. At the rear a lot of effort was done to create an ultimate smooth body. The molded in fenders have a very smooth transition due to the molded in belt-line. 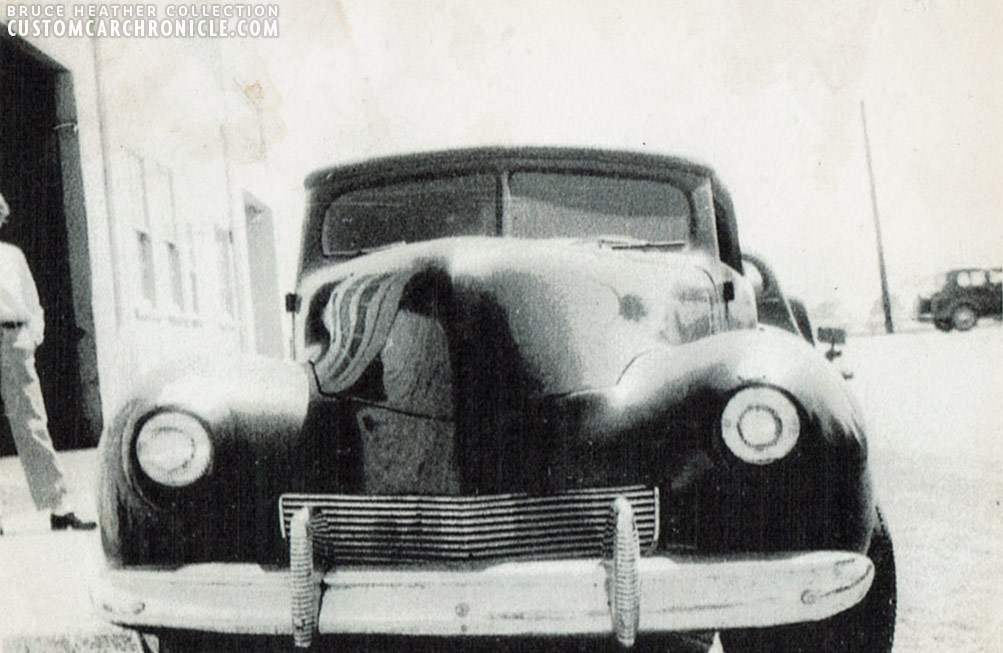 The grille looks to be the lower section of an 1940 Dodge grille set into custom reshaped front sheet metal. The Bumper looks to be a 1942 Packard unit with 1942 Studebaker bumper guards added.
[divider] 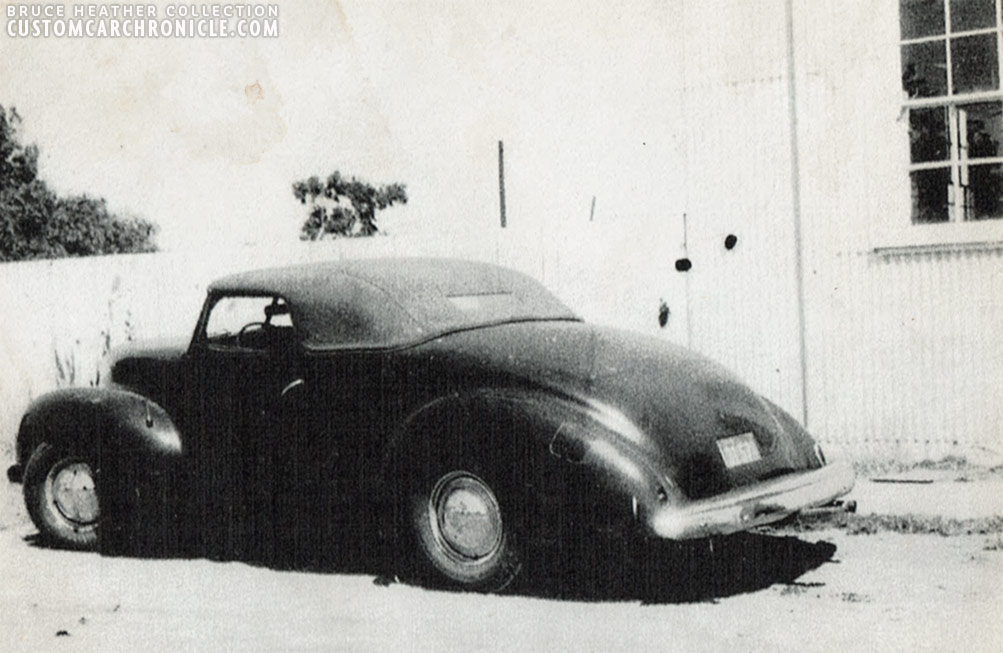 The trunk or rumble seat was welded shut and smoothed creating one large body panel for the complete back of the car. The only details are the set in license plate and the stock teardrop taillights. The stock bumpers front and rear were replaced with what looks like 1942 Packard bumpers mounted a bit closer to the body than stock. At the front 1942 Studebaker bumper guards were modified to fit the Packard bumpers. The rear one was left smooth. 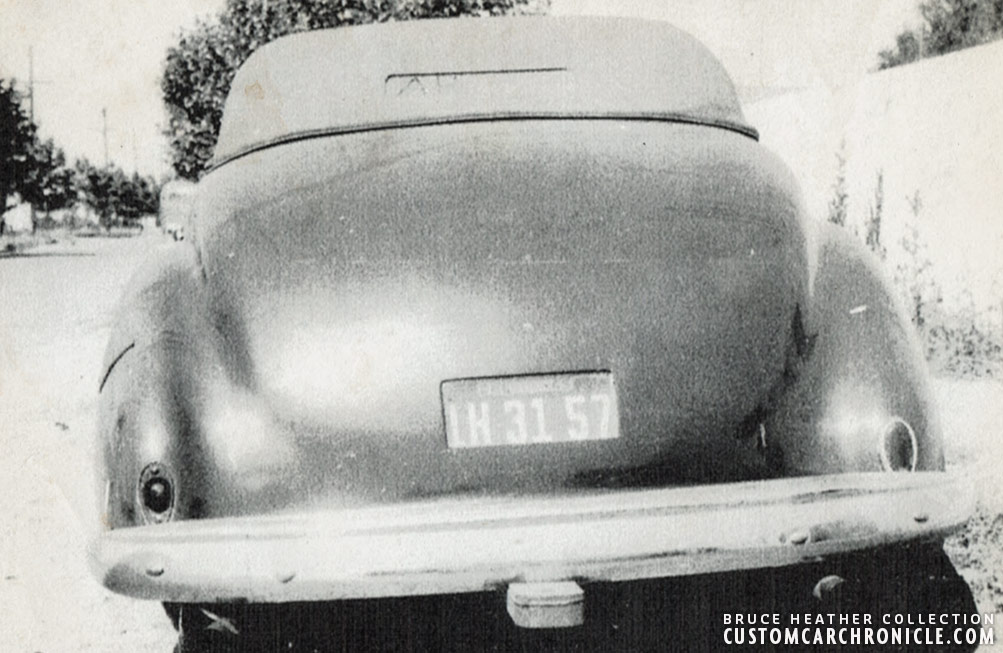 The photo from the rear shows that the fenders were molded to the body, and the complete trunk, or rumble seat cover was welded and smoothed to make it completely smooth.  square hole with very small radius corners was cut into the rear for a behind glass set in license plate. The rear bumper also looks to be 1942 Packard, but no bumper guards were used.
[divider]

Typical for the era the door handles remained on the car, also typical are the single bar flipper hubcaps and black wall tires due to the rubber shortage during WWII. The car was painted in a dark color, and most likely turned heads were ever it went. Most likely daily transportation for its owner. These are the only photos I have ever seen of this car, I have checked all my early publications, but there is no photos of it anywhere as far as I can tell. Any of our readers knows more about it? 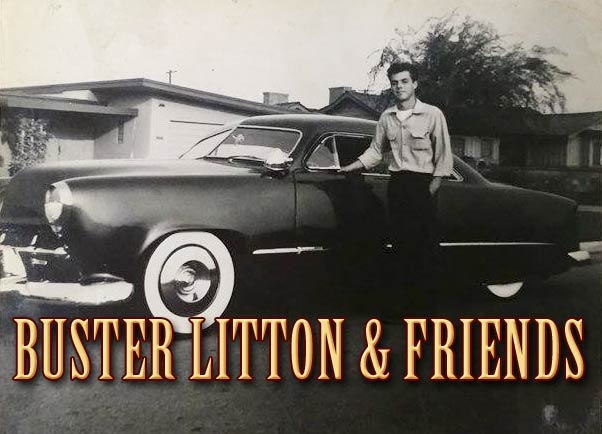 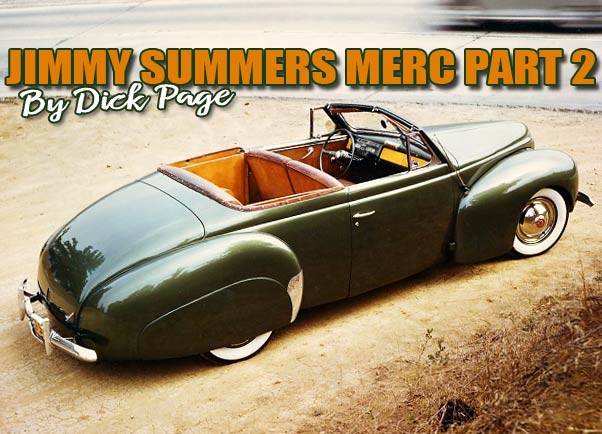 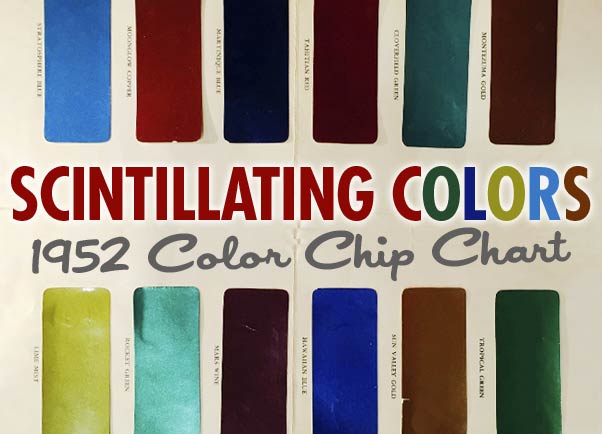