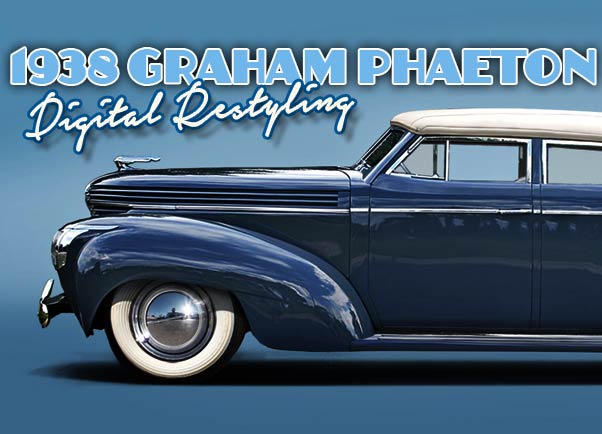 I always like to create better looking Custom Cars created from odd body models or styles. The 1938 Graham is such a car, the front end is very attractive, but the rest far from that. Time for a Digital Restyling Session 38 Graham Phaeton.

A couple of decades ago my father bought a 1/34 scale model of a 1938 Graham for his collection. When he showed it to me I was really fascinated by the front end design of the car. Wonderful Art-Deco styling, with its pointy nose, oddly shaped fenders all designed to create instant speed. And beautiful details as the square headlights and taillights sitting high up in the body. One thing I could not really understood was why the main body was kind of ugly, as if it did not belong to the front end of the car.

Many years later I was fascinated by the Graham again when I hear that George Barris had designed a convertible Custom based on this car and that it was being built at that moment. The end result was far from what I had in mind… and back then I started to think about how a really nicely styled Custom based on the 1938 Graham could look like. A year or two ago I heard about the Lincoln coupe project at Steve’s Auto Restoration where they were going to use a 1938 Graham front end combined with the Lincoln body and back. Eric Black did a wonderful side view illustration on that, which was very inspiring. But my vision had always been an early 1940’s styled Graham Custom. About a year ago I was contacted by a client here in the Netherlands who had just bought a 1938 Graham four door project. And he hired me to do a few design proposals to show what would be possible. I did a few very interesting concepts for him, and while I was at it, I decided to created the 1938 Custom Graham that I have had in my mind for a long time. A 1938 Graham Phantom Phaeton. (Well, actually convertible sedan, but that name does not sound as good) 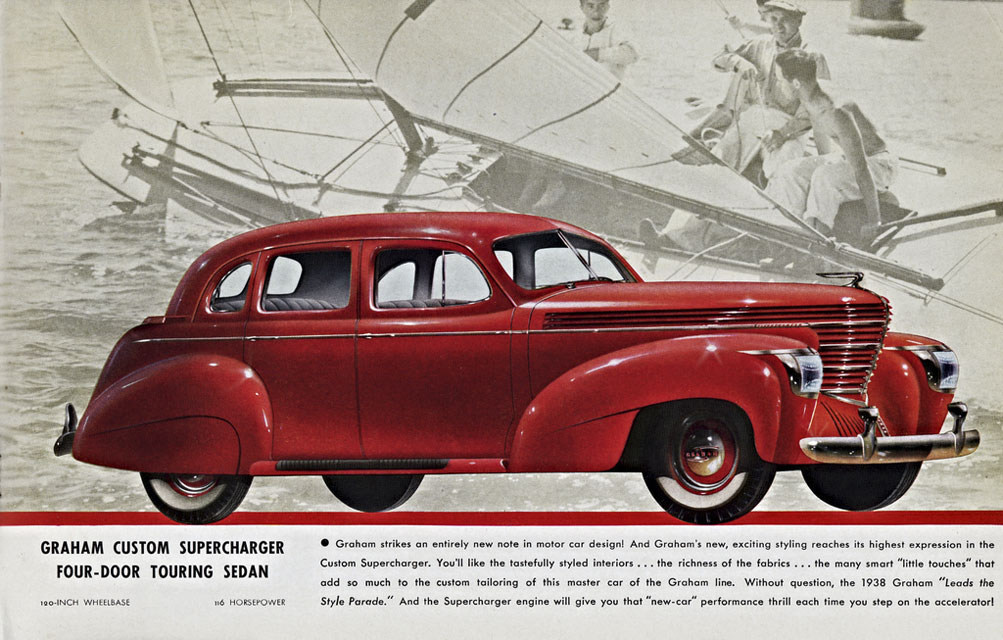 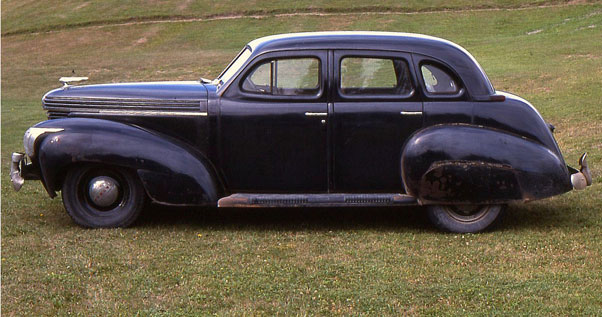 This was the only perfect side view I was able to find… not good for a starting photo of the Digital Restyling process. However I would be using this photo after I was done with the project for my client to create a four door base for my Ultimate 1938 Four-Door Graham Phantom Custom.
[divider]

When I started with the project we had agreed that a side view would be the best way to show the lines of the new car. Well sometimes that is easier said than done. I could not use the actual project car for the Digital Restyling process, A because the car was still on the boat to the Netherlands, and B even if it had been available for photos, the rusty body and missing parts would not have worked as a starting base photo. So I searched the internet for a suitable side view photo. All I was able to find at the time was a un-restored rusty four door, just as my client had (although his project is slightly more rusted) and a nice side view of a rare two door coupe. Since the body styles I needed to create for my client were far from the four door body style, I decided to start with the Coupe. Which meant I had to recreate the four door style for my own project at one point. 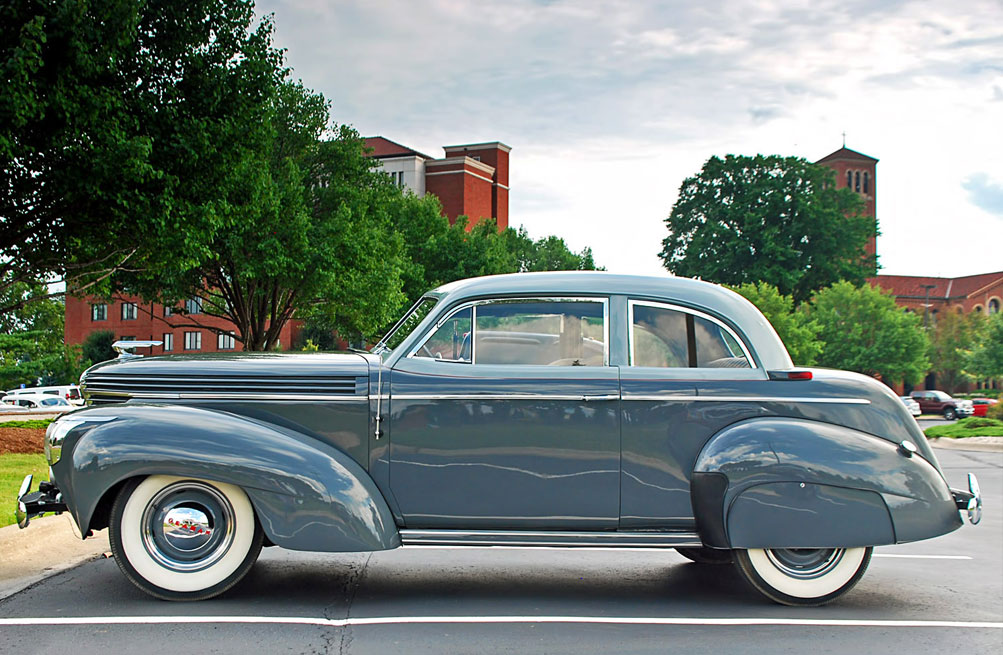 This is the base photo I decided to use. A nice low angle side view that would show the lines of the design the best.
[divider]

Both the four door sedan as the two door coupe have kind of ugly rear sections of the body. The coupe has a very elegant top, while the four door body has rather heavy pillars making the car look rather cartoonish. I think it will be very hard to create a really beautiful custom out four door body style without going rather extreme. So for my ultimate Custom 1938 Graham Custom I decided to completely remove the thing I did not like, the top, and rebuilt the car as an four door convertible.

Since I started with the coupe body it was relatively easy for me to do. The A-pillars already had the shape I needed and the B- and C-pillars could also be uses. In real live it would mean quite a bit of custom fabrication to make this change. Possibly another brand wrecked convertible windshield could be adapted. And of course the frame would need to be reinforced. But I know of many four door to sedan convertible projects, so its not impossible to do. And basing this on an wonderfully styled 1938 Graham would create something really unique.

For my ultimate 1938 Graham Phaeton version I added four doors to the two door donor body. The whole body was lowered, the windshield was reshaped to look like a convertible top would look. The side windows were chopped and the B-pillar from the coupe thinned reduced in width by about half the size. I lowered the taillight and moved it a bit further to the rear sitting just behind the side trip. The gas filler cap was shaved and I added running boards as the four door model has, but shaved the top and added some stainless strips to them. This was my base which I would use for a few small variations on the theme. 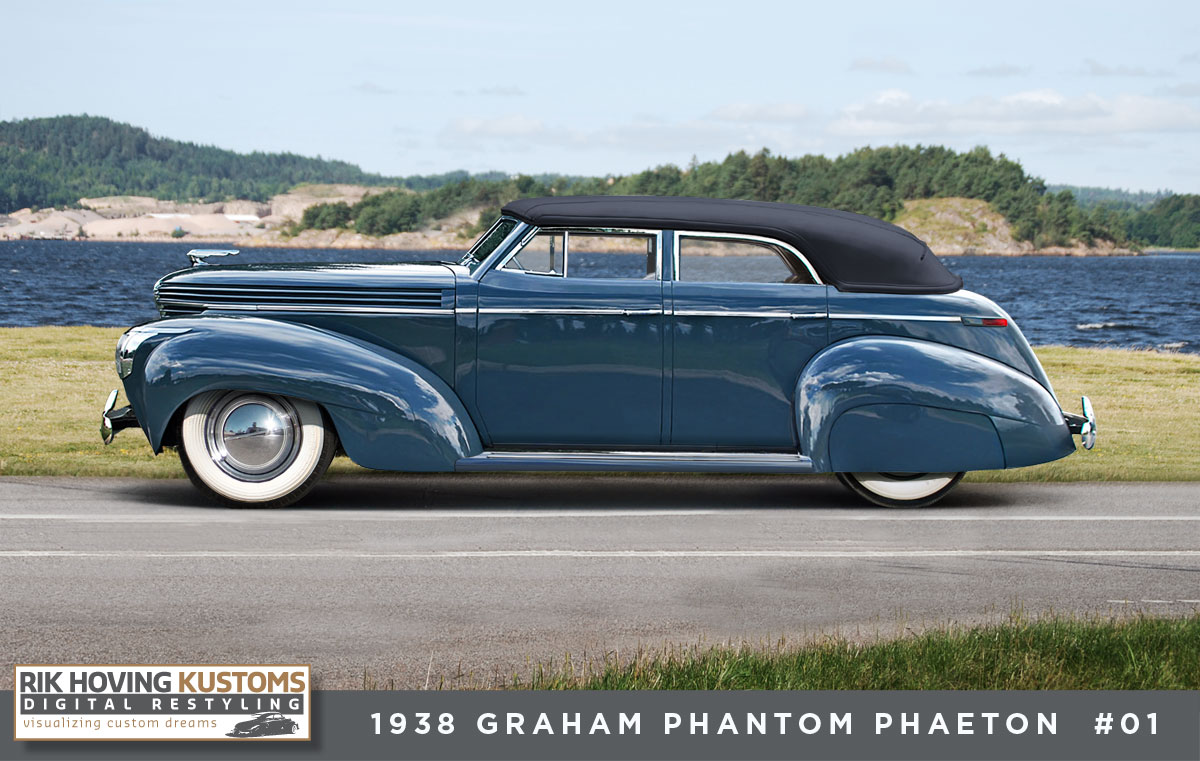 My first version was created as an late 1930’s early 1940’s styled phaeton. Dark colored padded top with the rear of the top matching the shape of the rear side window. Single bar flipper hubcaps on early style ribbed white wall tires.
[divider] 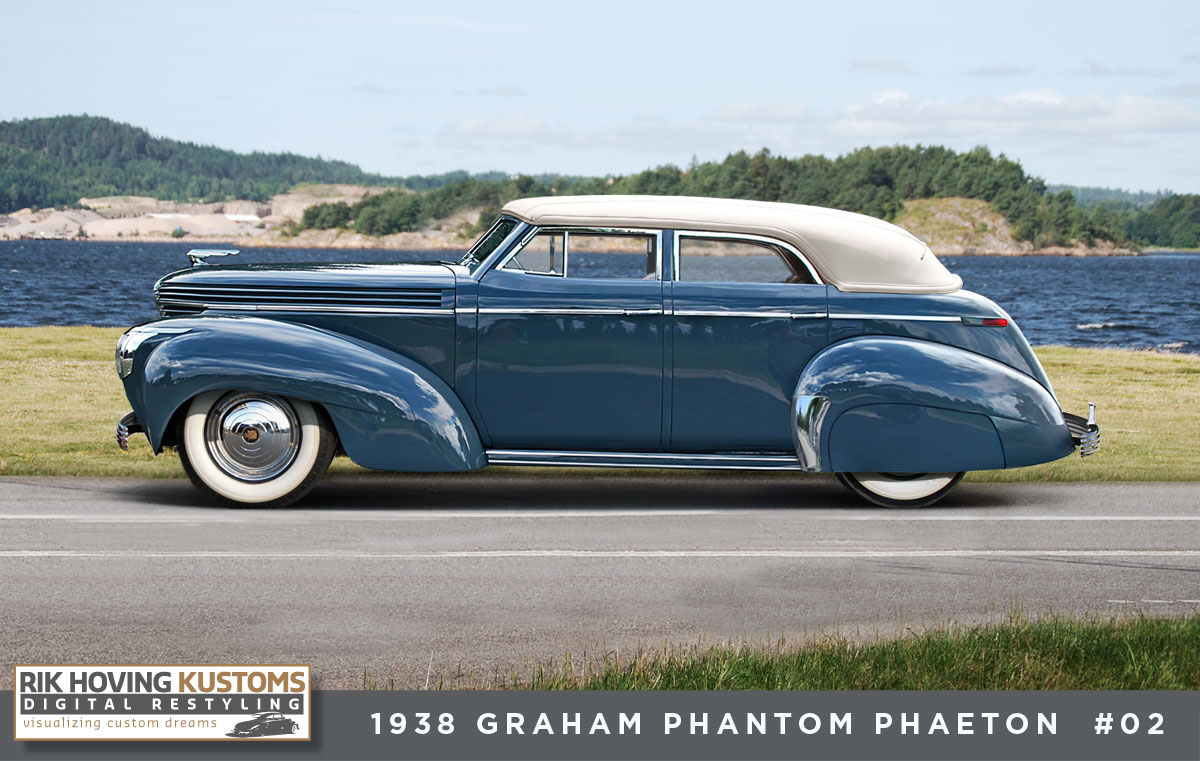 Second version used a white colored padded top, which changed the looks completely. On this version I used the removed running boards from the coupe, and I added a chrome plated rock shield to the rear fender. I used 1937 Cadillac hubcaps and added 1937 DeSoto bumpers.
[divider] 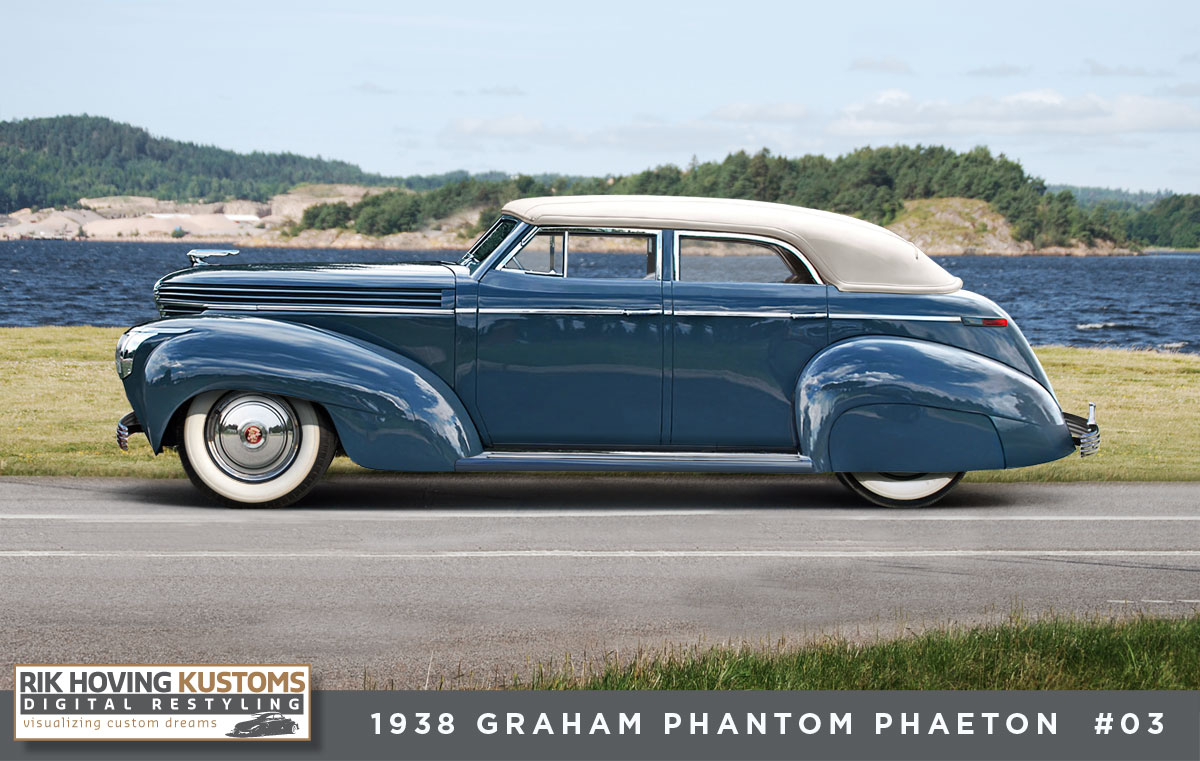 Third version uses a slightly different shaped padded top, one that flows more in the back, for a more streamlined look. I added 1941 Cadillac hubcaps with beauty rings and updated the white wall tires to a set of smooth white wall tires.
[divider] 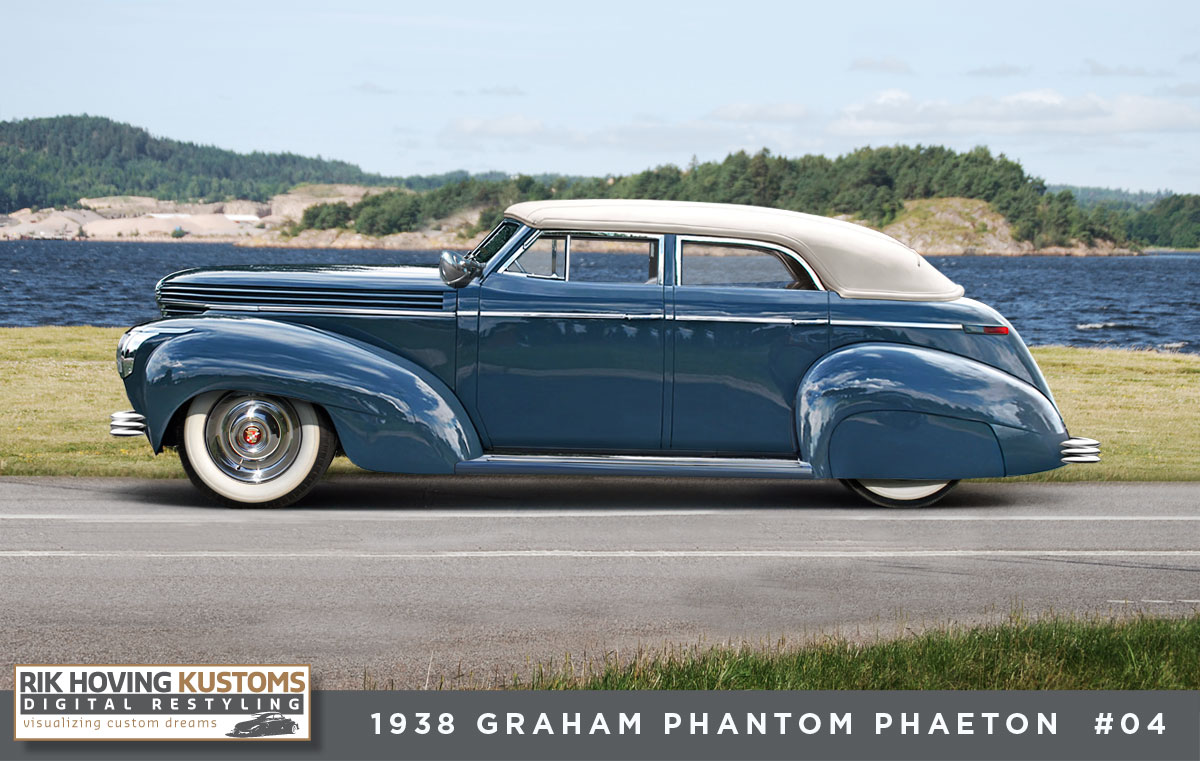 The fourth version is done as if it could have been updated in the later part of the 1940’s. Still the same body mods, but the body has been lowered a bit more and set on a more speed boat stance. I have also added a set of Appleton spotlights, Cadillac Sombrero hubcaps, and custom made bumpers. (the bumpers are actually modified pieces from the Eric Black artwork mentioned earlier in this article)
[divider] 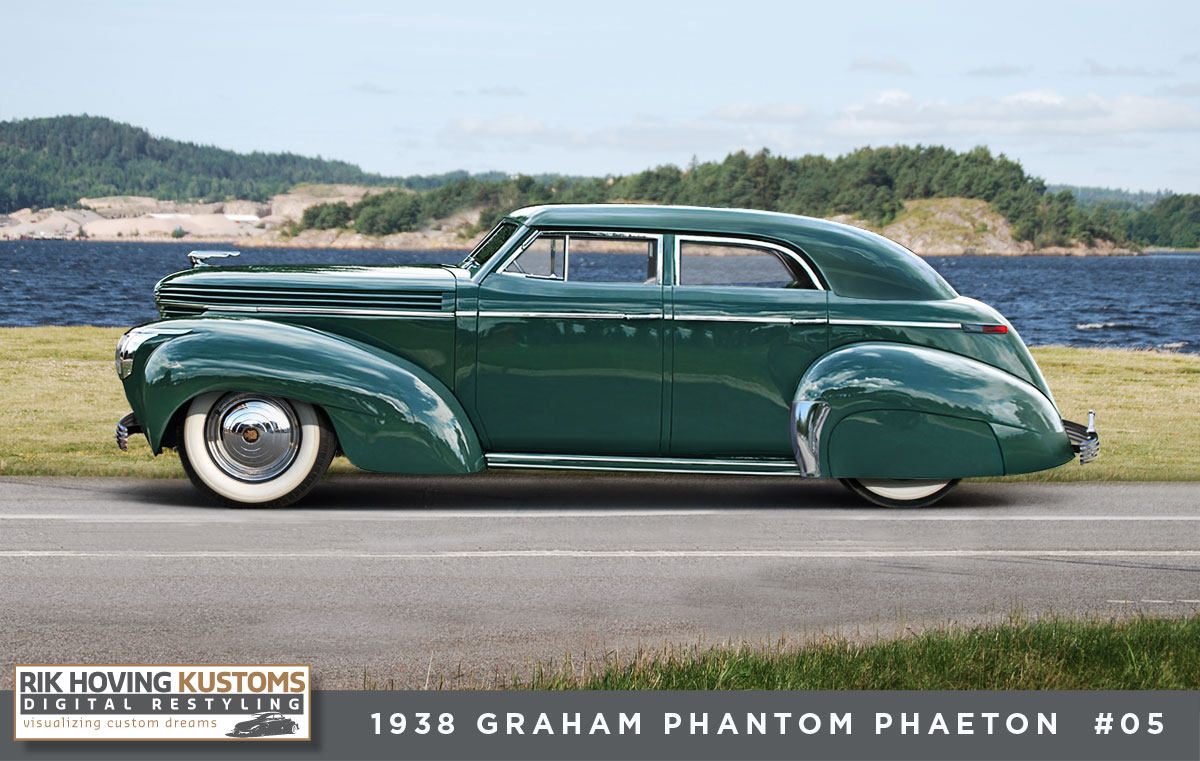 
There are of course many other ways of Customizing the 1938 Graham, and I have some other really neat ideas in my mind. But for this one I wanted to keep it relatively simple, and most of all something that could have been created in the late 1930’s early/mid 1940’s. I wanted to show that these Grahams are great subjects for Customs Cars with their unique nose and front fenders. 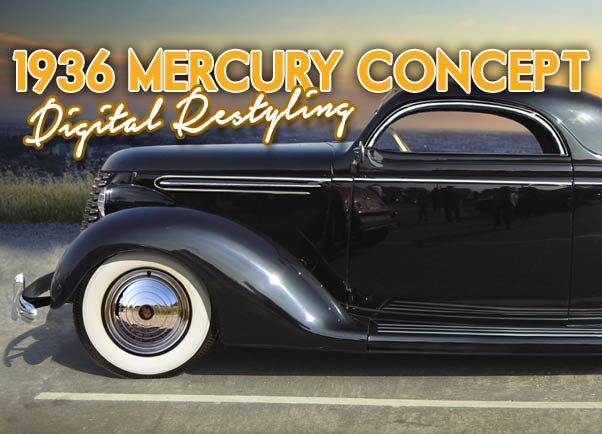 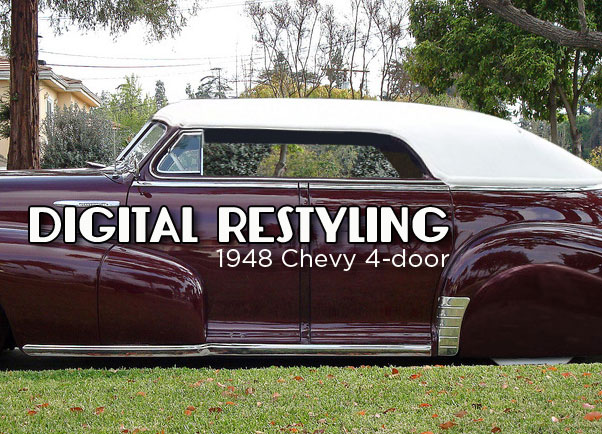 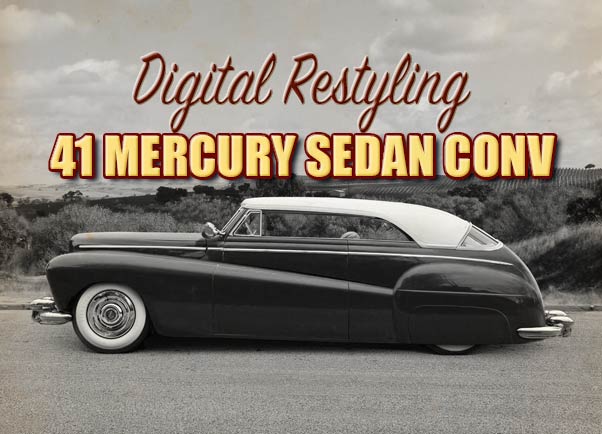