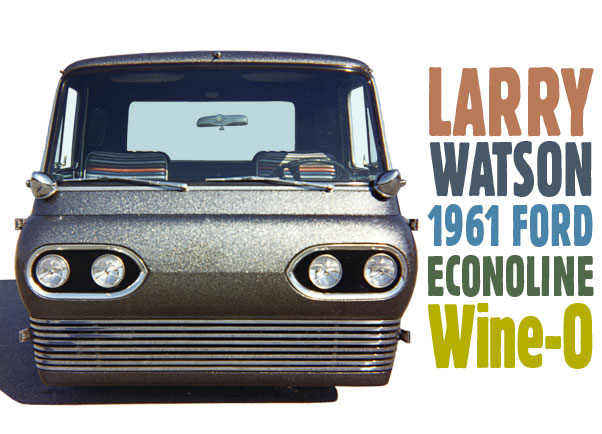 Larry Watson created a few Ford Econoline’s for himself. This wild Metalflake 1961 “Wine-O” was his favorite.

Larry Watson created this 1961 Ford Econoline in 1964-65. Larry had some great ideas about the New Metal Flake paints and wanted to experiment with it. At the time Larry’s friend Bill DeCarr had started to do the the body work on the pick up. Bill modified the grille opening and filled it with a square tubular chrome plated grille. He also modified the headlights which are based around the stock headlight opening but now with dual headlights on a black plexiglass base. Bill cleaned up of the rest of the body and made everything as smooth as possible.
[box_light]This article shows a selection of photos from the Larry Watson Personal Photo Collection. More on Larry’s personal collection can be found in the Larry Watson section on the CCC-Site. Or on the Custom Car Photo Archive.[/box_light] 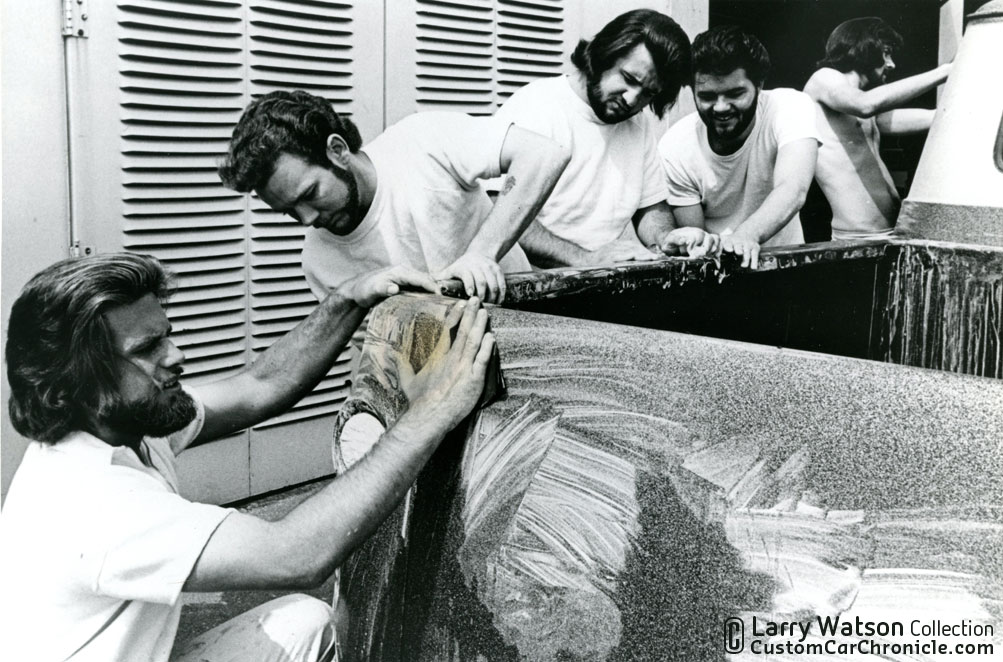 This photo was taken in 1964 by H. Lee Hooper from Downey while the crew at Larry Watson’s shop was color sanding Larry’s 1961 Econoline Pick Up after Larry had painted it Salt + pepper Metalflake. From left to right: Larry Watson, Carl Sampler (who was Larry’s first cobweb customer with his 1963 Pontiac), Don “Penguin” Loster (Larry did a 1959 Ford twice for him), Famous Car painter Bill Carter (which Larry called his #1 student) and Killer Jesse sanding the cab. Looks like beards was THE fashion from man in 1964.
[divider] 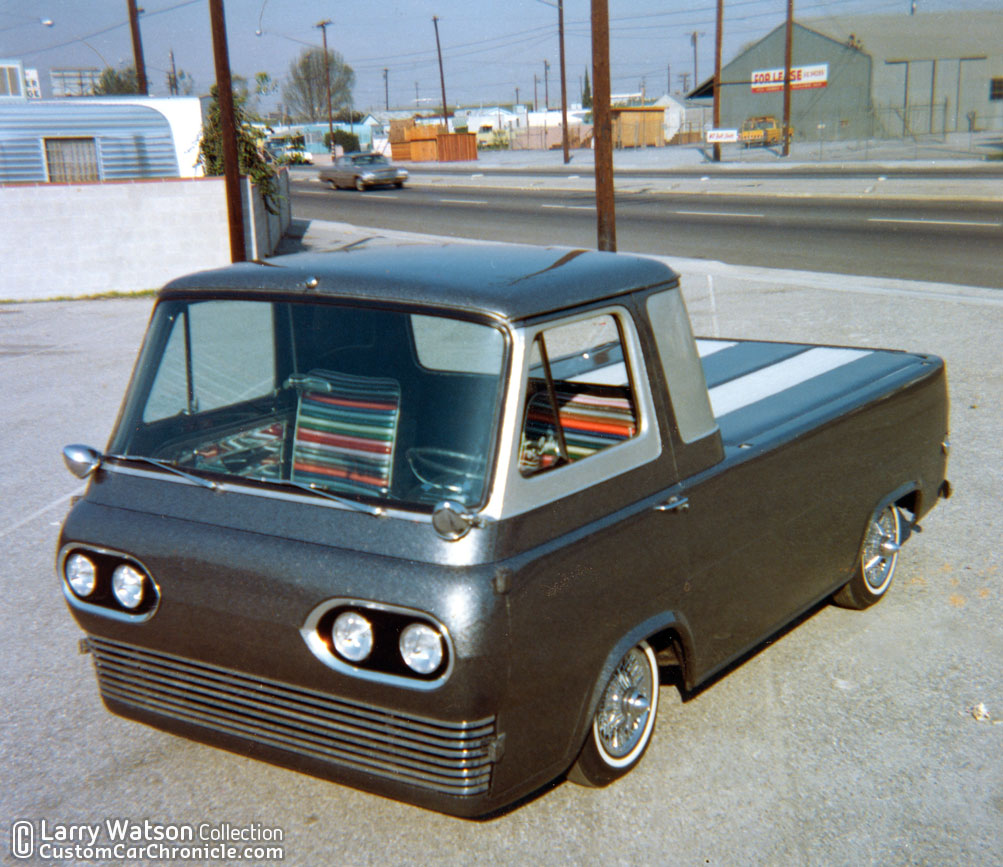 Nice view of the rainbow Joe Perez interior. The colorful passenger seat reflects nicely in the interior door panels, which are either polished aluminum or chrome plated. This high point of view also shows the custom made tonneau cover which Joe covered in black and silver metalflake vinyl. The silver sectioned had small pleats running from front to rear, but that is a bit hard to see in this photo.
[divider] 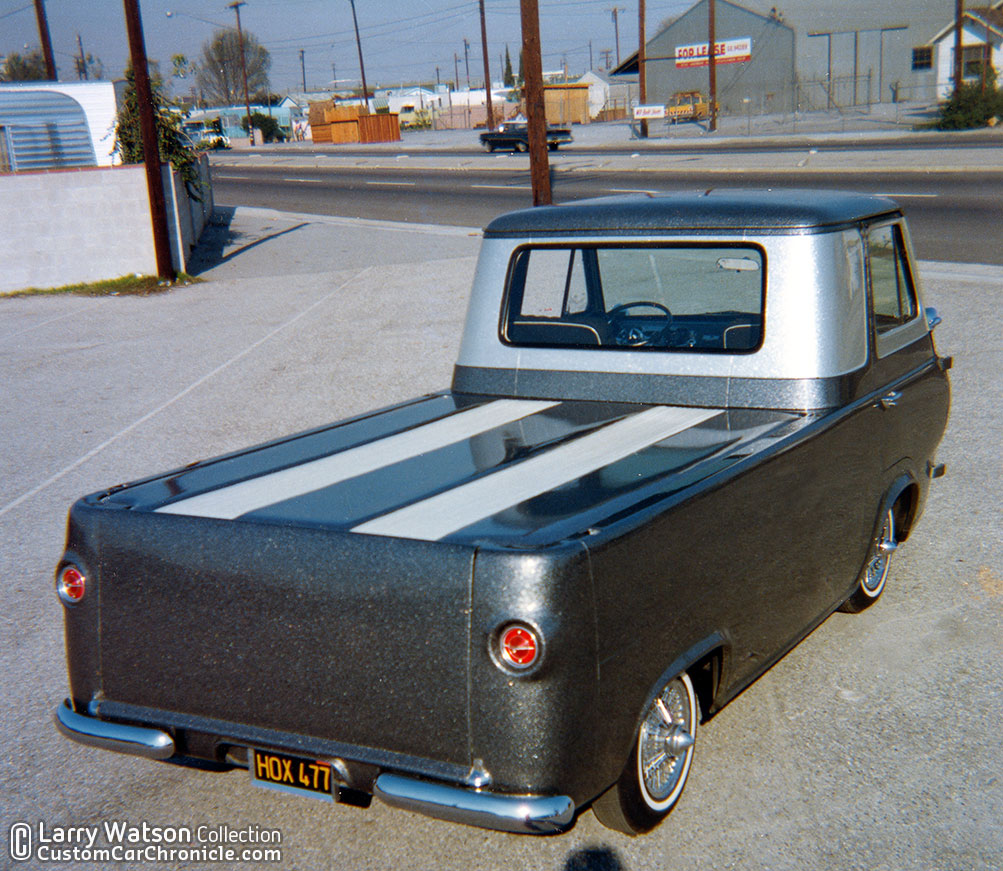 Bill DeCarr created a smooth back end for the truck. He removed the original bumper and replaced it with Ford Thames rear bumpers with the license plate in the cleaned up surround in the center. The pick up tail-gate was filled-in and completely smoothed to match the rest of the body. This photo also shows another nice details like the matching bullets that were used on the Corvair accessory wire wheels as well as on the steering wheel center.
[divider]

Then it was time for Larry to paint the car with an experimental metal flake paint. He combined black and silver flakes in a 3/4, 1/4 mixture. Creating his first “salt & pepper” flake paint job. The inserts around the windows were taped off and Larry painted those in a nice silver with large flakes, but not as large as what he used in the main body. The Binks paint gun company always wanted Larry to experiment with new tools they came up with. And they now had new three piece spray head created for painting with extra course flakes. The Wine-O was perfect for this new paint gun. When the paint was done Bill installed a set of Dummy Spotlights, and Gene Muffler shop close to Larry’s shop split the exhaust manifold and created the new muffler system for the Ford. 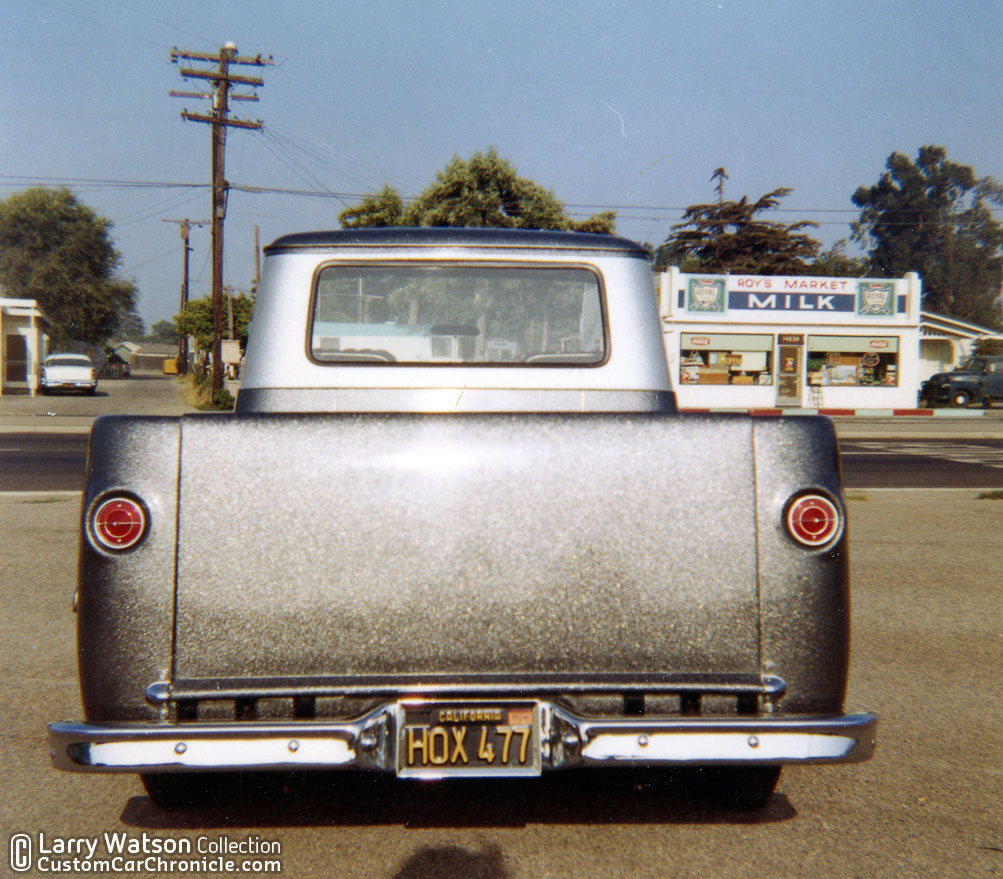 The taillights were replaced with units taken from a 1963 Corvair. This photo shows the earlier version of the rear bumper.
[divider] 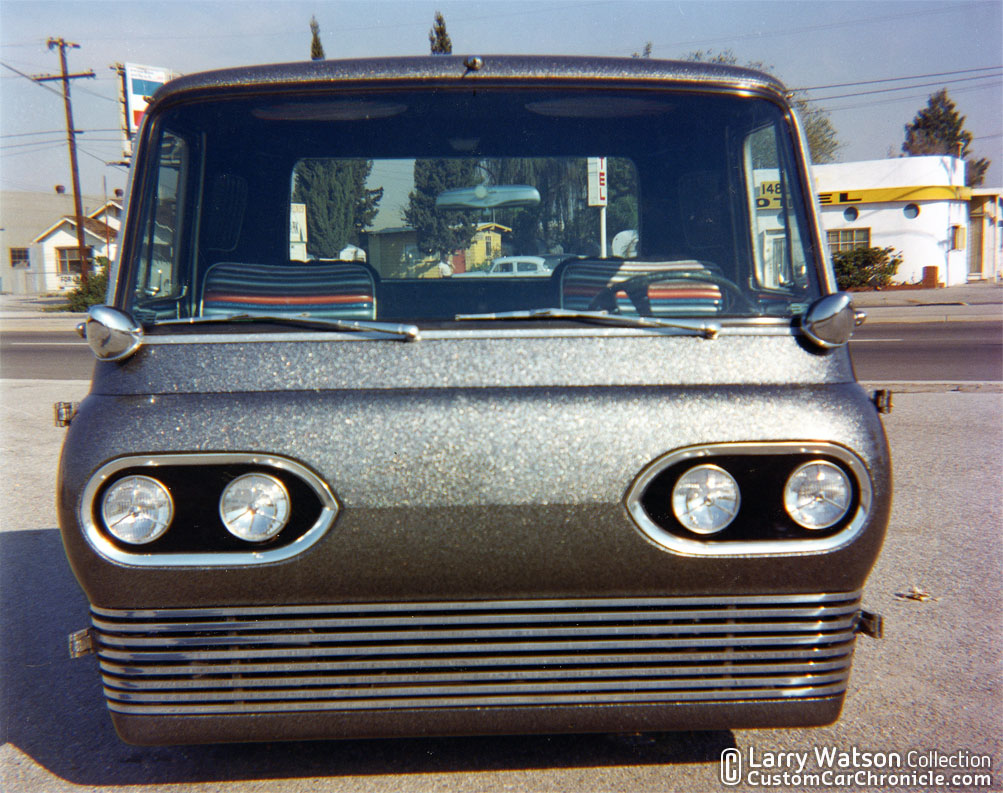 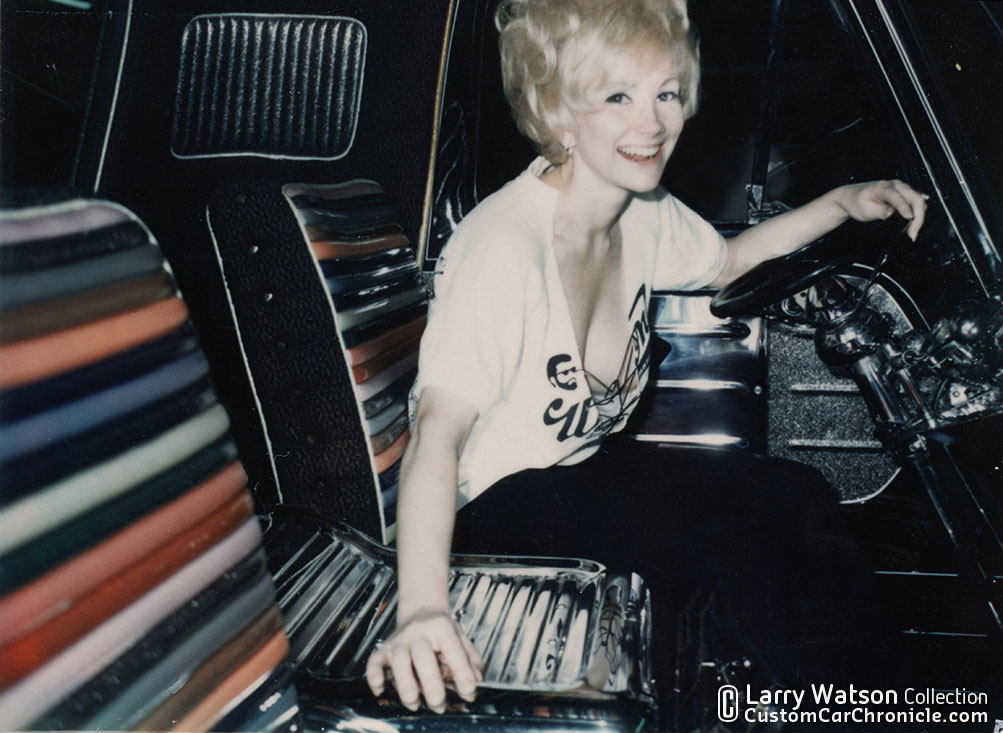 Interior photo of Larry’s 1961 Econoline “Wine-O”. The model in this photo is Donna Allen. Donna worked a lot for Larry in the mid 1960’s. Helping out at the shows, promoting and doing photo-shoots like we can see here.This photo and the next few show the nice work Joe Perez did on the interior. Thin horizontal rainbow pleats with silver metalflake piping and black frieze were the materials Joe used to create this wild interior. The chrome and polished details on the interior work nice with the metalflake painted panels.
[divider] 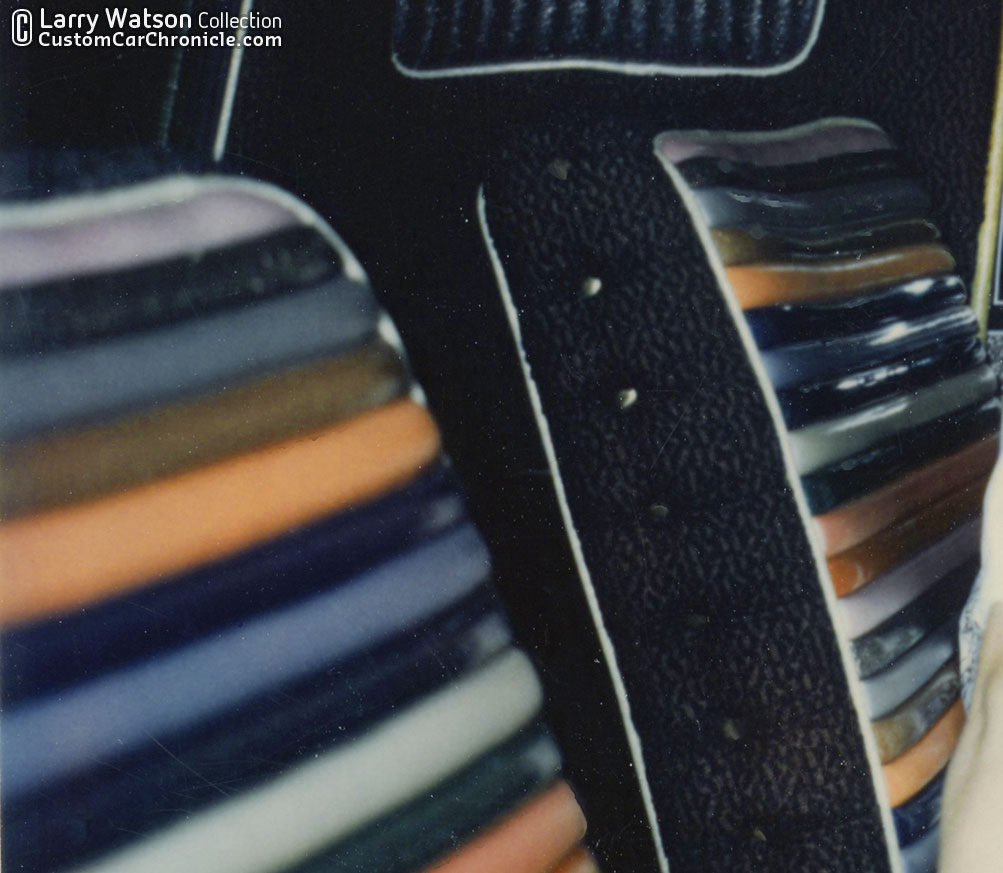 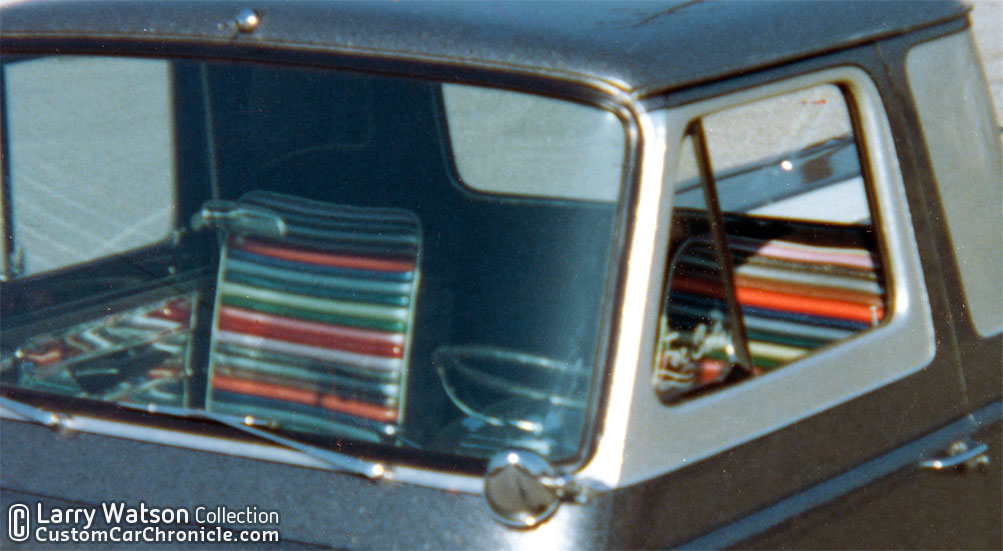 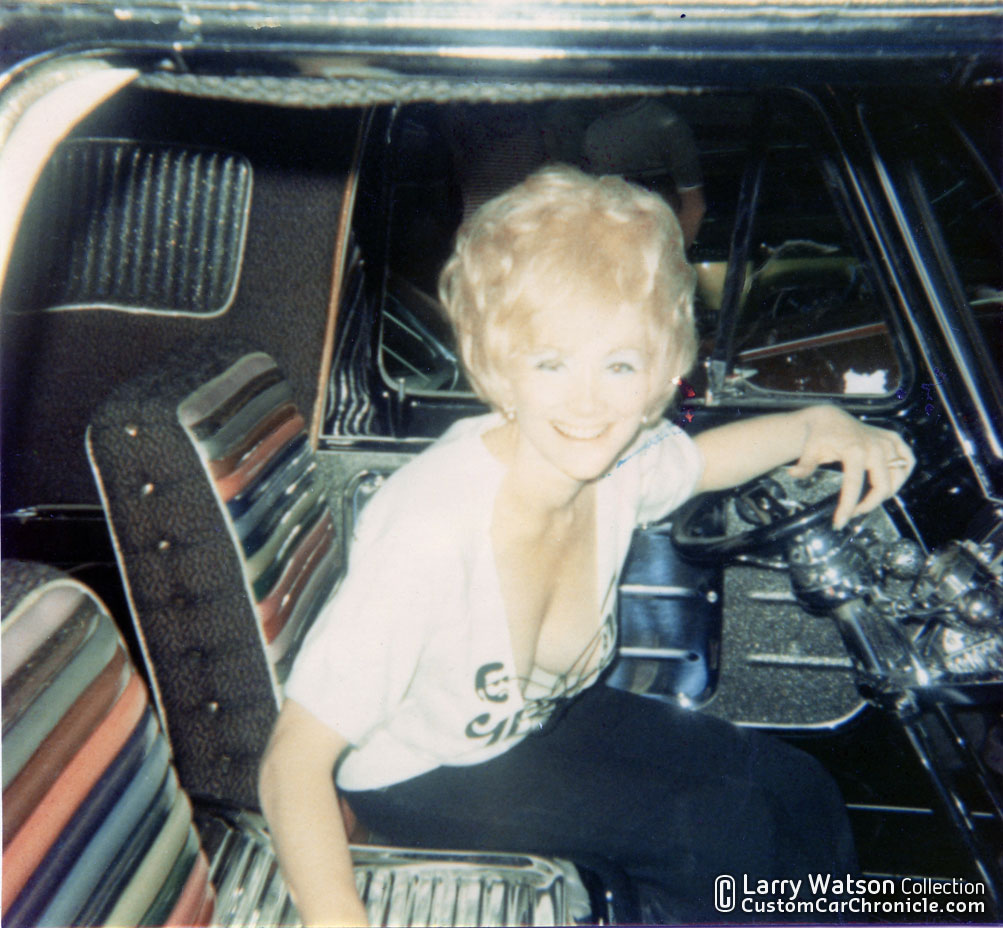 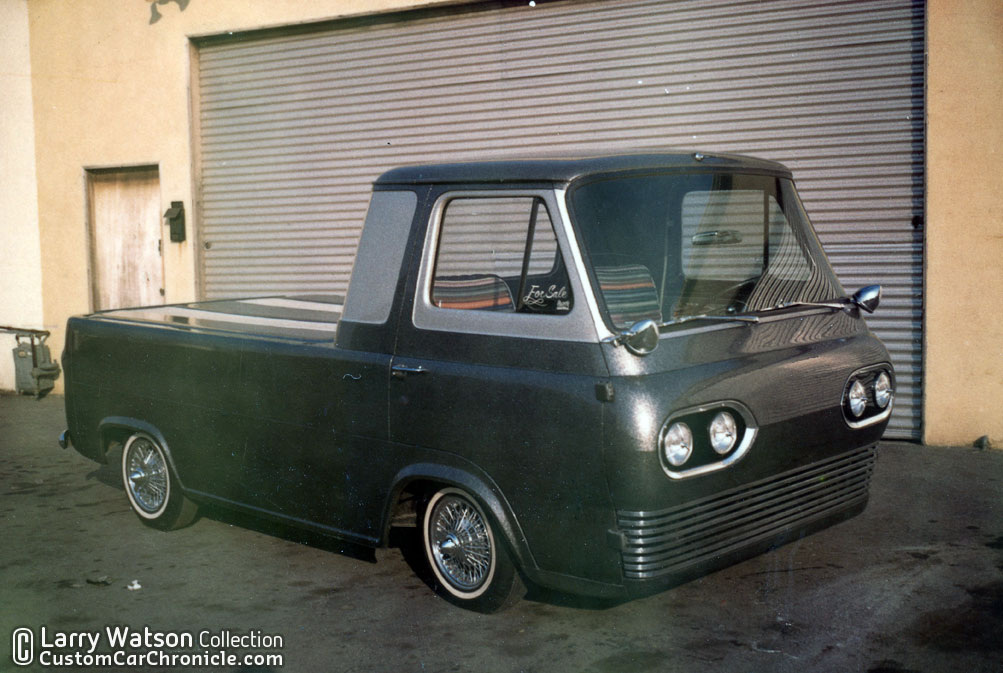 Larry enhanced the body lines on the cab with adding the silver in the recessed sections around the windows, but leaving the higher portions on the B-pillars the main body color. The small diameter (13 inch) wire wheels were Corvair accessory units with custom knock-offs dressed up with small chrome bullets. They were mounted on thin line white wall tires.
[divider] 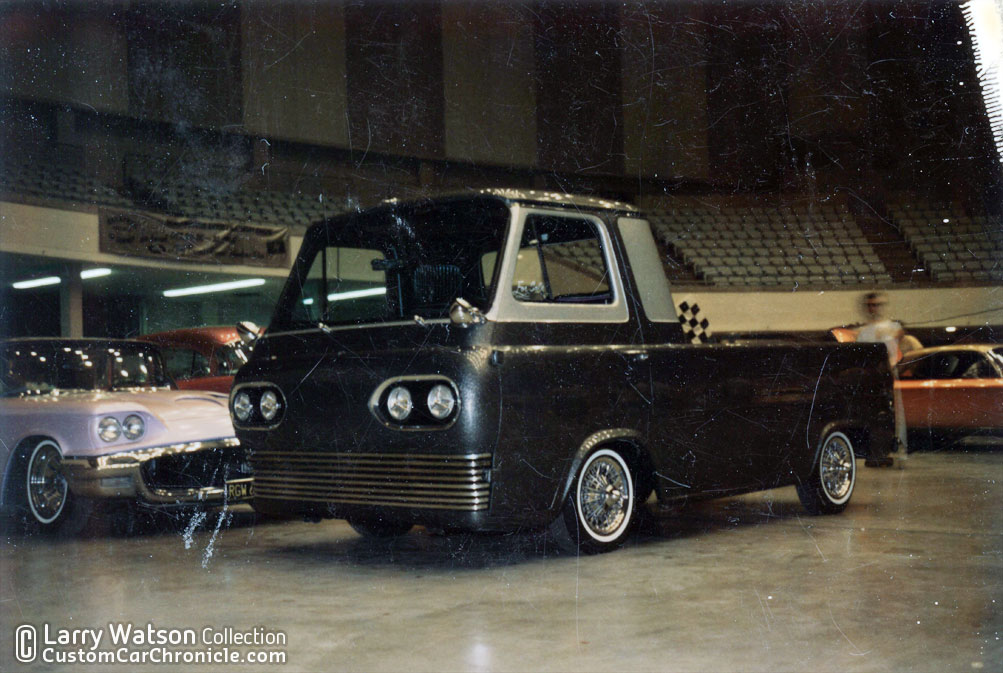 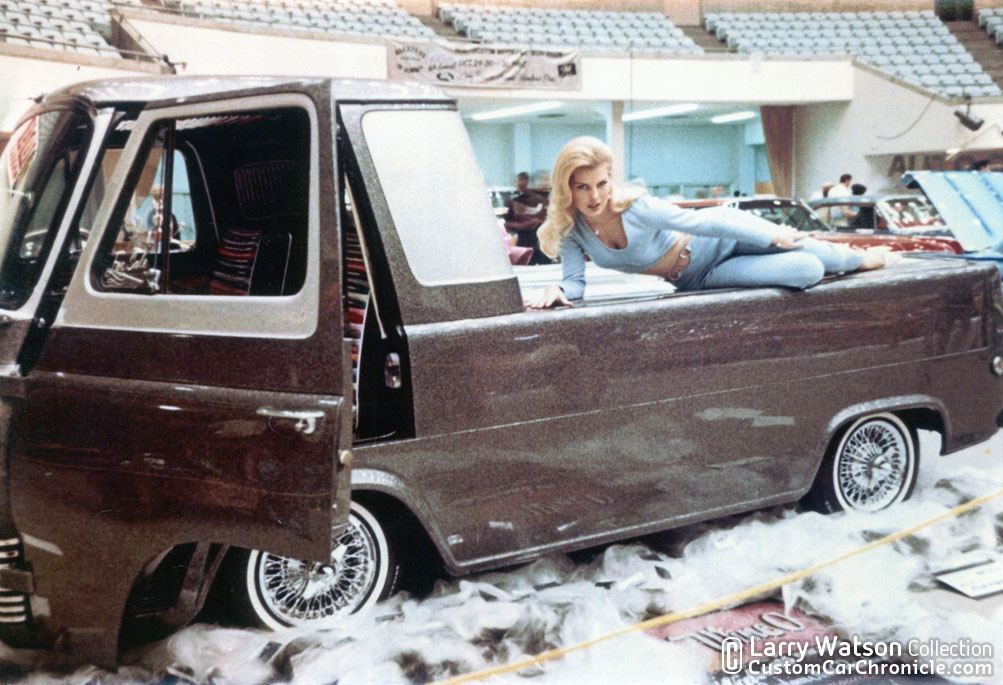 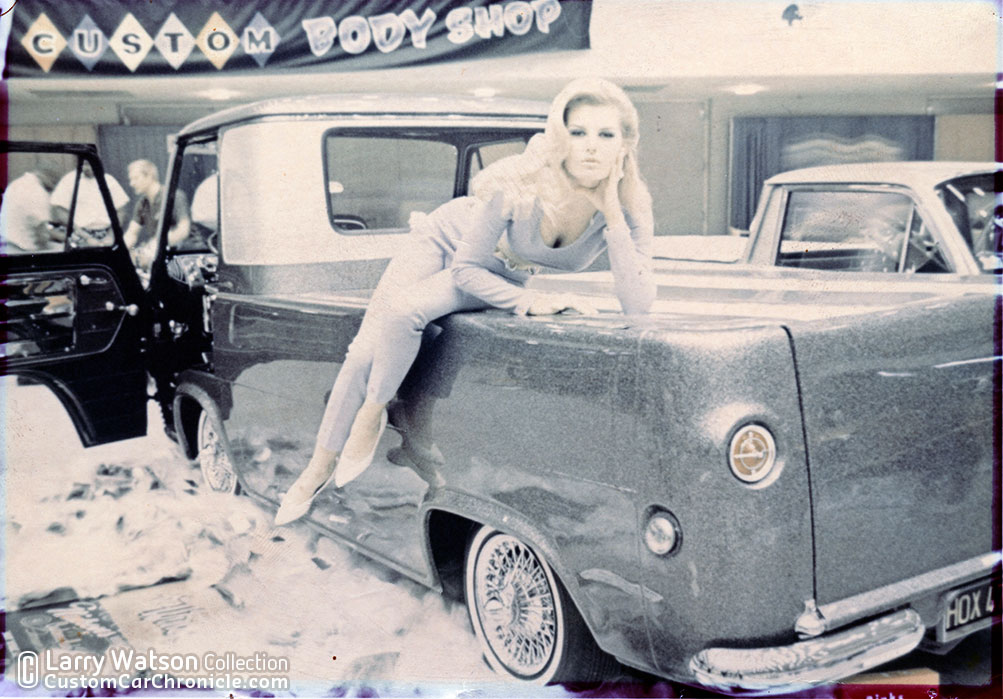 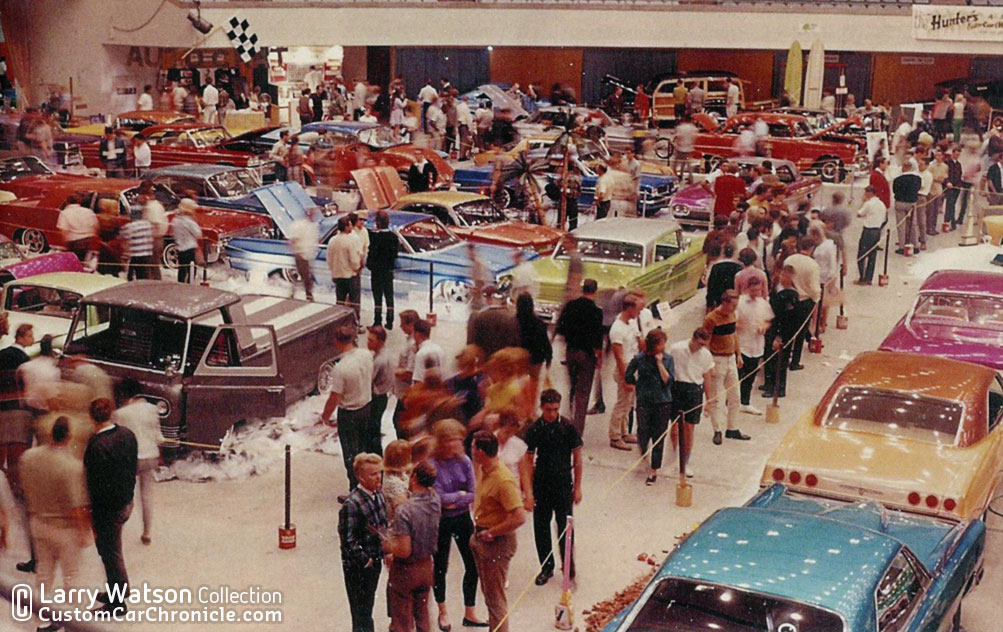 On the left we can see Larry’s 1961 Ford Econoline at the 1965 Tridents Car Show in Long Beach California.Larry Watson was the main attraction at this Car Show and had over 40 cars on display on the main floor. 40 cars that Larry had painted, and all were spectacular. This much have been such a great sight with all those wonderful colors and special paint effects all parked together. And it must have been like heaven for Larry, a milestone in his career.
[divider] 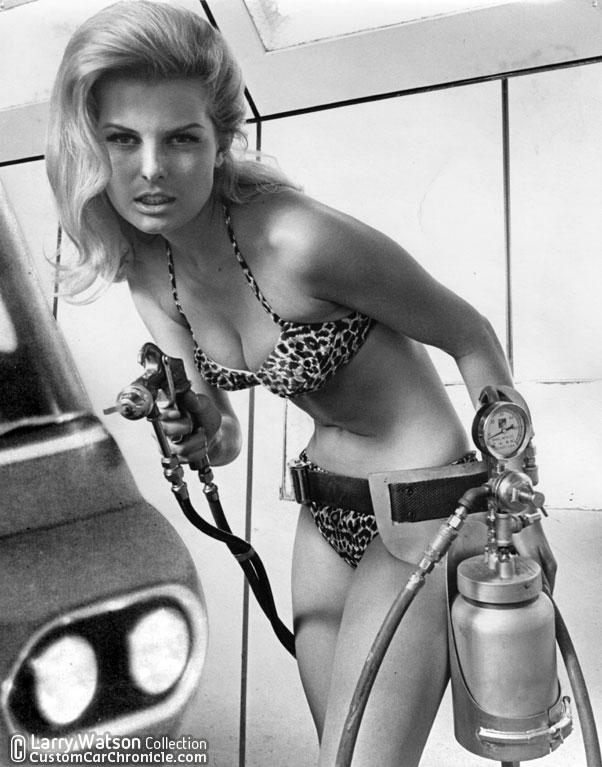 Amedee Watson-Chabot posing with the special Binks spray gun and two quart pressure pot with belt. This photo was used in the companies ads in the mid 1960’s. On the left we can see Larry’s Econoline, however this was a separate photolater glued onto the photo of Amedee. 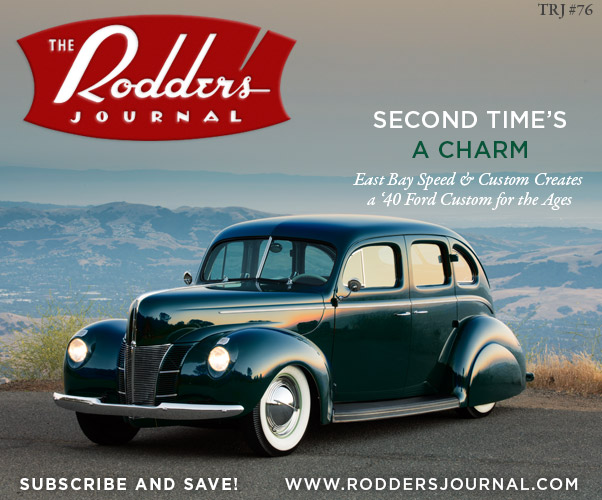 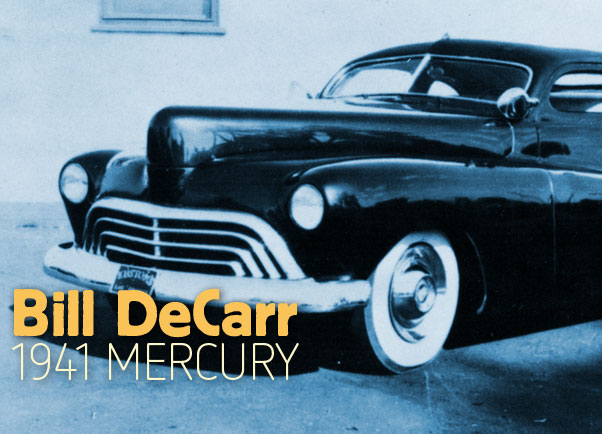 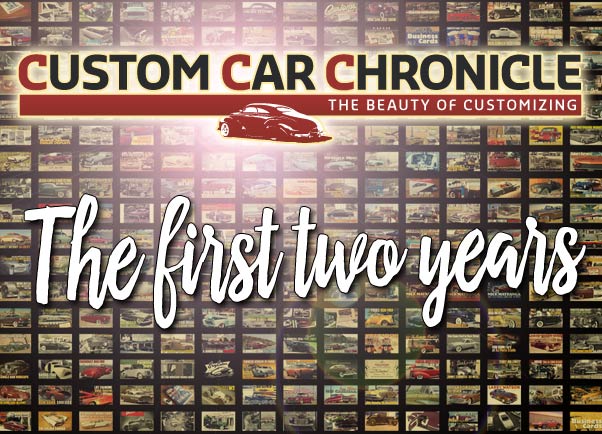 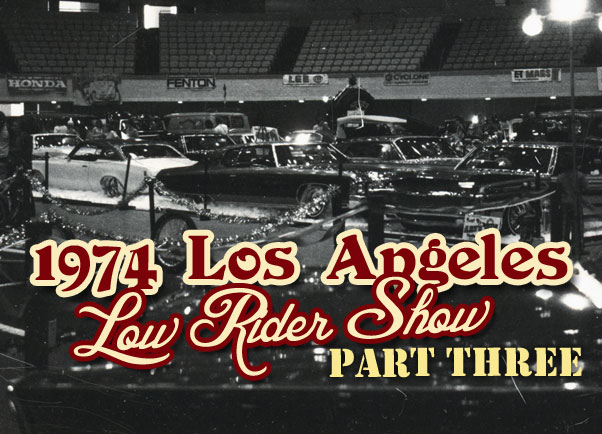