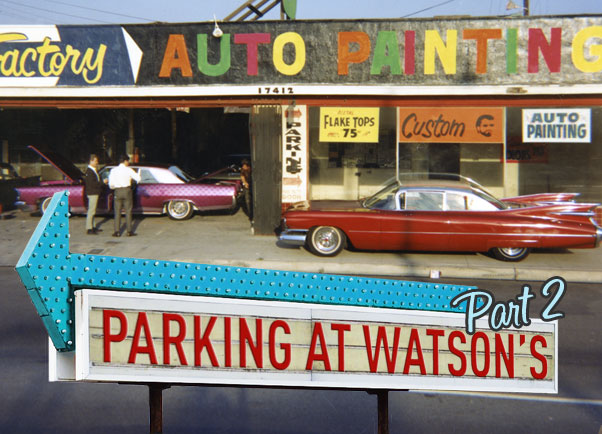 Second and last part, for now, on Larry Watson painted cars parked in and around the Watson shop.

This second article shows another nice selection of photos from Larry’s Personal Collection with cars parked around several of Larry’s paint shops. Some cars were there to be worked on, others were finished and just parked there because the owners visited the shop. And in some cased the cars gathered at the Watson shop to get some final detailing before a car show. The photos are mostly snapshots taken by Larry, or some of his friends. And because they are snapshots and not staged they are very interesting, since they show how it looked at the Watson shop on an average work day. We hope you will enjoy this second set of Parking at Watson’s photos. 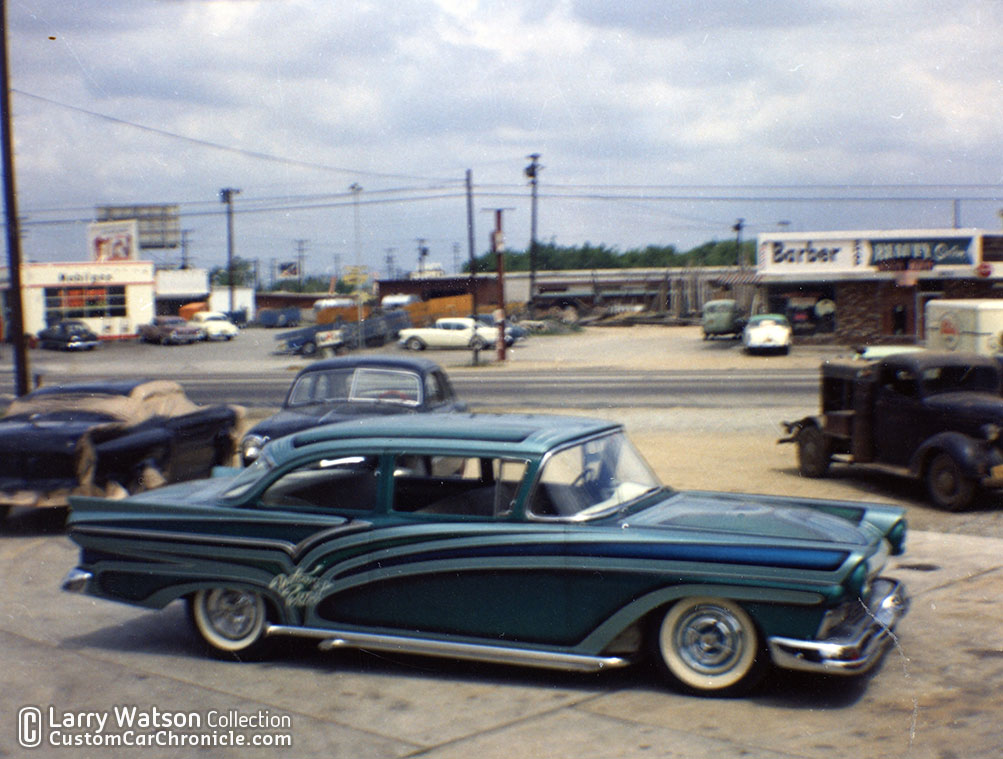 Unidentified 1957 Ford Sedan. Mildly customized with the handles and emblems removed. Very interesting, wild panel-fog paint-job. Base coat consist of a light pearl blue, with panels in bright candy blue and turquoise, both with fogged darker edges, and outlined with contrasting striping. Slight forward rake with double lake pipes give the car a nice look. The four bar lancer hubcaps were color coordinated. On the left, behind the Ford we can see possibly an early version of Dave Kyte’s chopped 1955 Mercury in black, or perhaps was it a new paint job to cover up the out-of-control scallop fade panel-job? 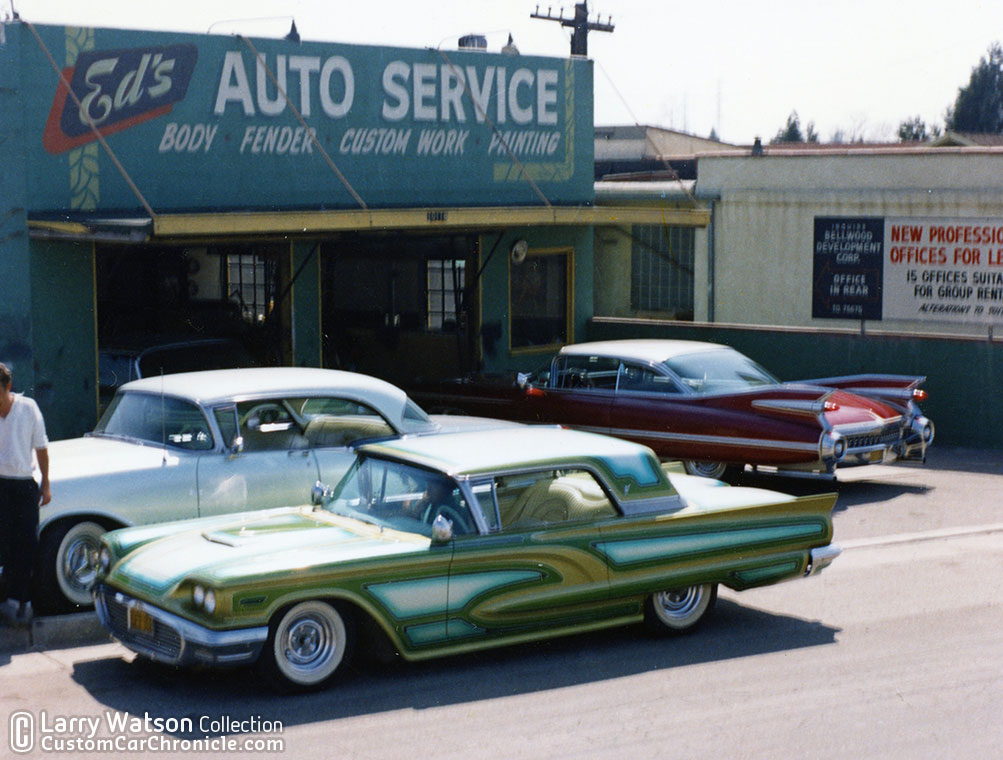 Ed’s Auto Service is the former Ed Schelhaas body shop on 10116 Artesia Boulevard, Bellflower, CA. Bill Ortega bought the shop and Larry rented the paint booth in the back. The multi-hue green paneled 1959 T-Bird is George Texeria. Parked behind it, is Larry’s personal 1959 Cadillac. 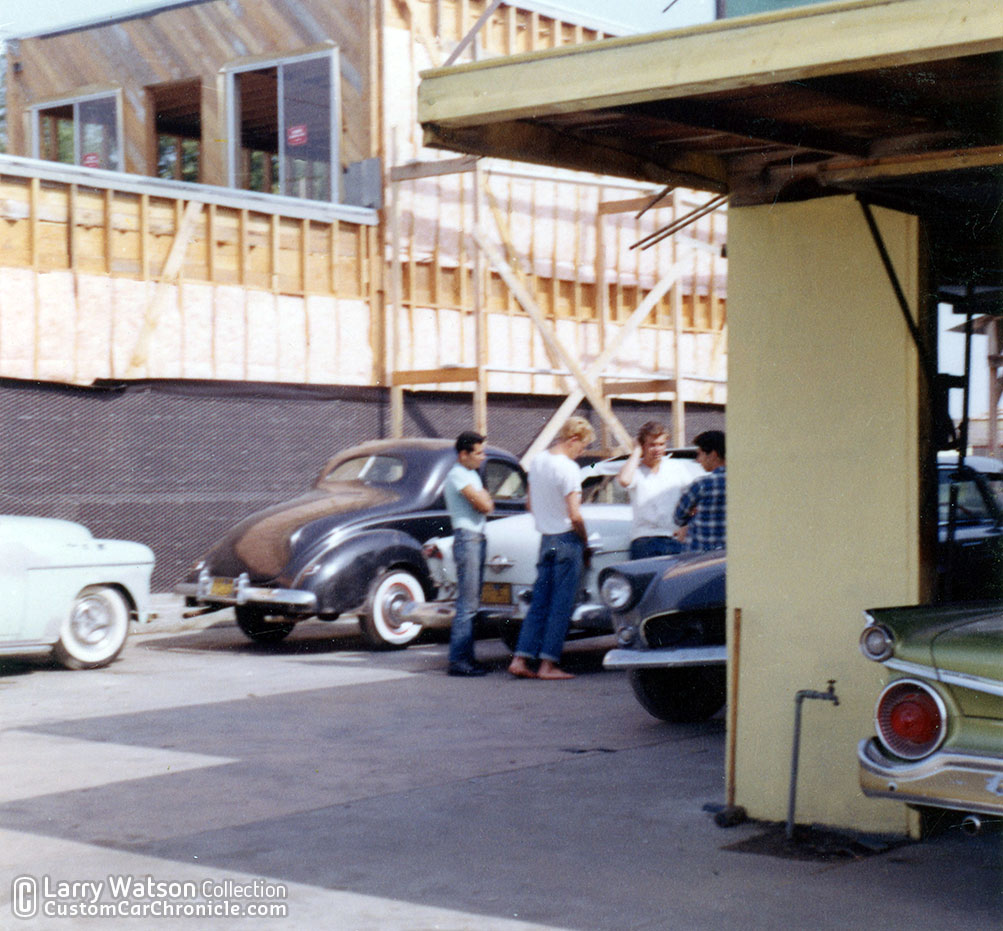 An early photo of the Artesia Blvd shop shows the building next door, still in progress. The cars parked next to Bill Ortega’s shop are either project cars, or daily drivers from the guys hanging out at the lot. It looks like the gray T-Bird had some chrome removed from the nose. 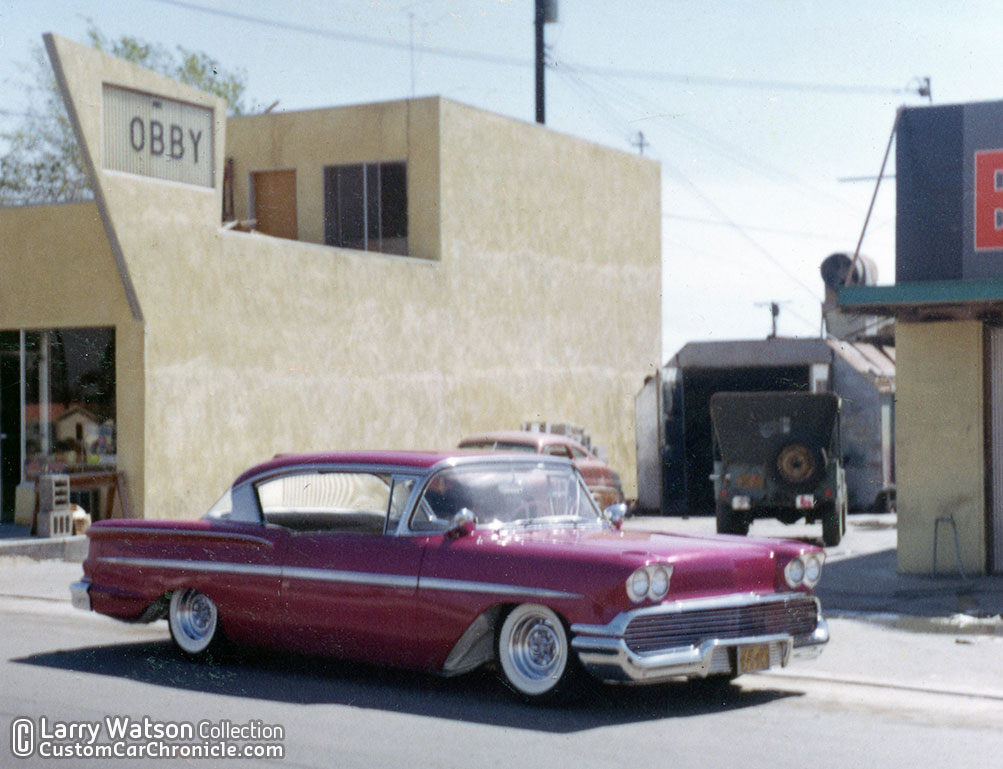 Here the building next door to the shop is all finished and even Bill/Larry’s shop has been repainted with a new shop sign. This photo must have been taken around 1960. The car parked in front of the shop is a wonderful mild customized 1958 Chevy owned by Dave Roberson. Larry painted the car Cherry burgundy over platinum pearl. We can see the Johnny Zupan/Bettancourt Mercury sitting against the wall behind the car. The Jeep is owned by one of the shop employees. The Hobby shop building was at one point Al Lazerus his motorcycle shop. 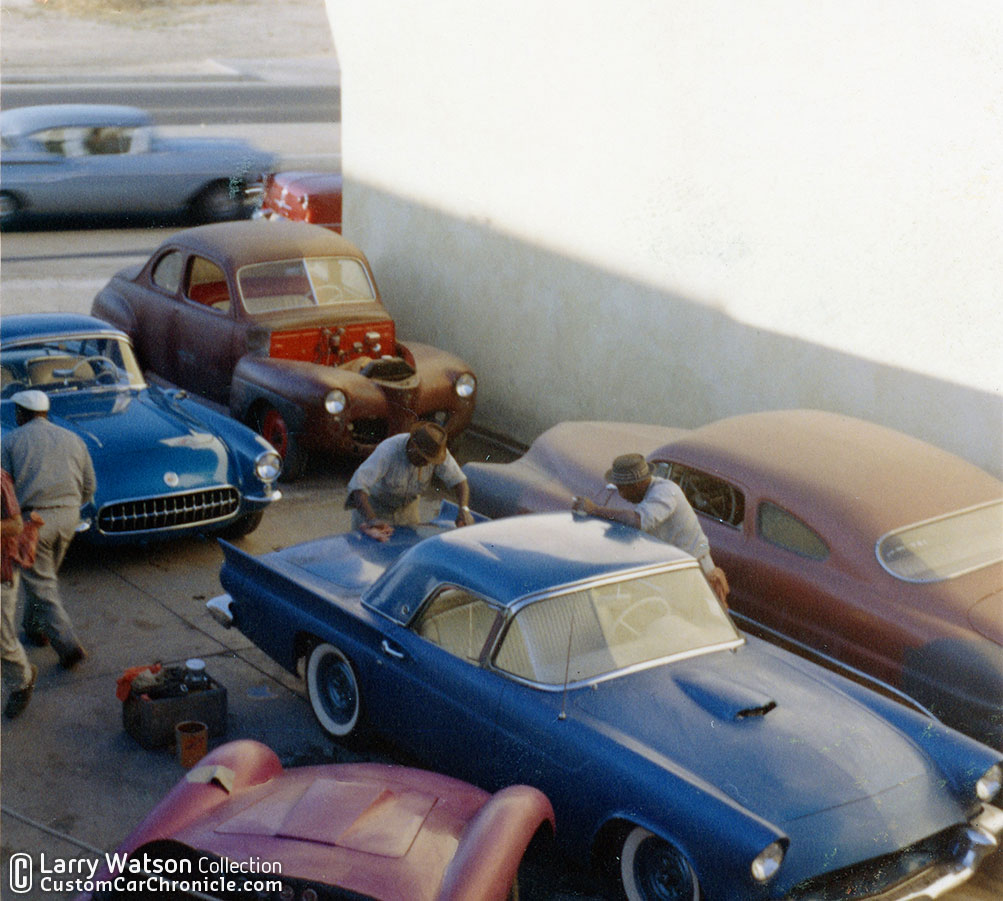 Most of the times, the parking space next to the shop was filled with cars, parked or worked on. On the far right we can see the old Louis Bettancourt, now Johnny Zupan’s Ayala/Barris 1949 Merc again. A 1941 Ford Coupe, 1956 Corvette and 1955 T-Bird are all project cars. The blue T-Bird has a new paint job which gets a cut and buff in this photo. Larry hired some guys from time to time, to polish his new paint-jobs. 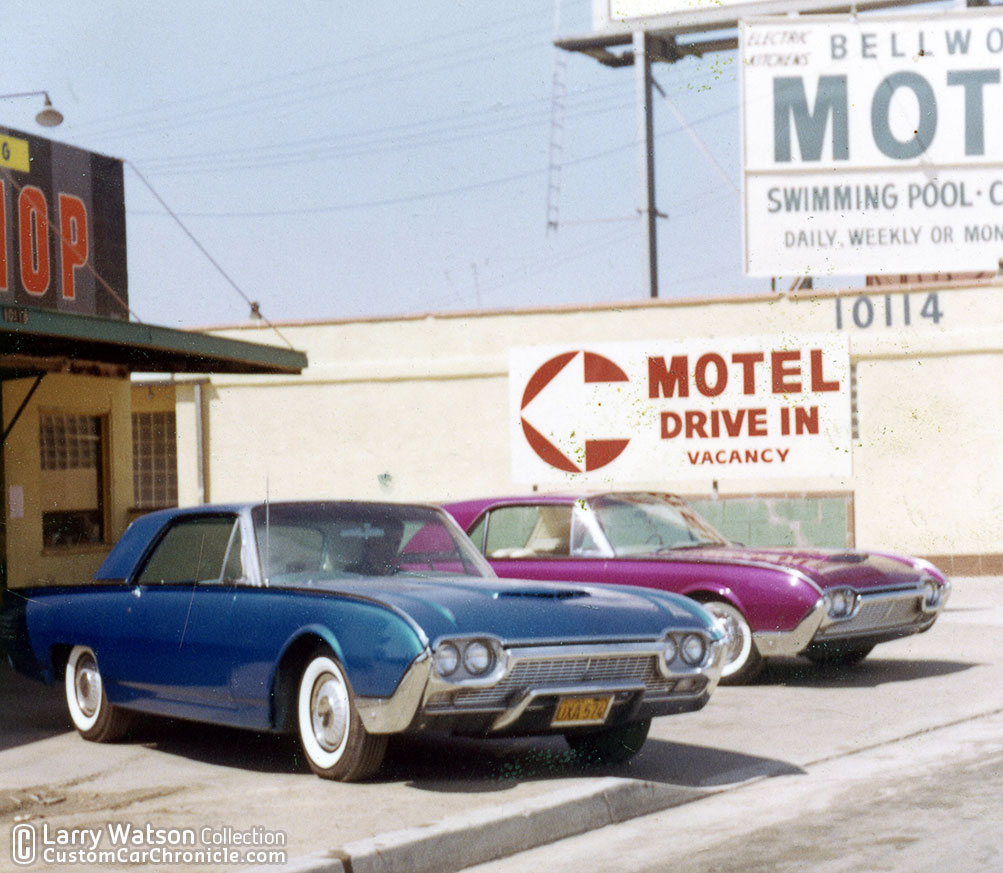 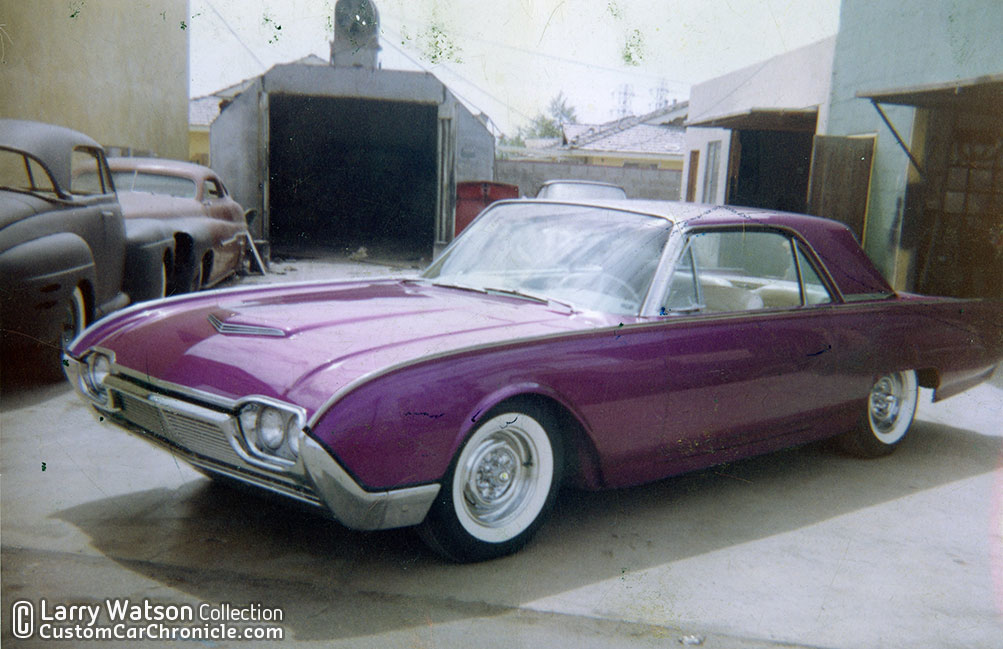 In this photo we can see the purple T-Bird from the photo above, again. Larry added a wonderful candy purple paint job over the smoothed body. The chrome reverse wheels look good. In the background we can see Johnny Zupan Ayala/Barris built 1949 Mercury. It was at Bill’s shop for a new front and rear using Studebaker pans and quad headlights, which has been finished and in primer when this photo was taken. On the far left is an unidentified 1946-48 Ford convertible with what looks like a 1951 Ford Hart Top grafted on. Very interesting custom work with the top left stock height, custom taillights. In the back ground we can see Larry’s paint booth with the doors wide open and the vent shaft on top of it. 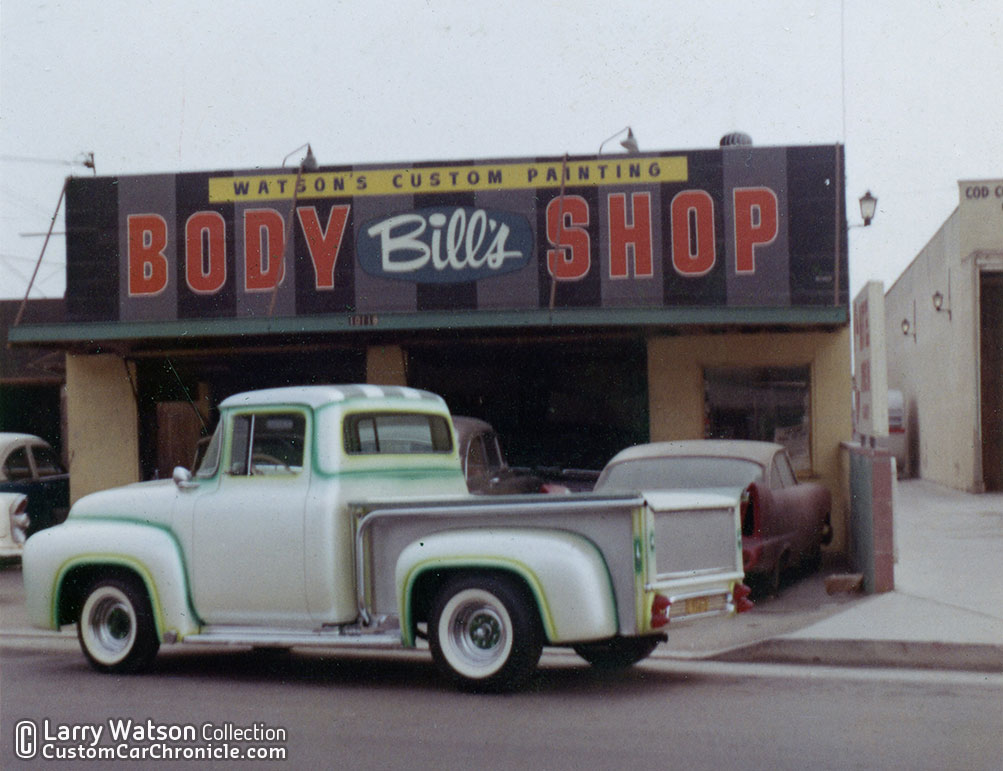 The Ford Pick up in front of the shop is Johnny Zupan’s 1956 Ford F-100. Larry painted the car pear white and added two tone green fogging. This photo gives us a good look at the shop sign. The vertical gray lines in the background were used on Larry’s old Rosecrans shop and came back in this shop as well… despite this being Bill’s shop. 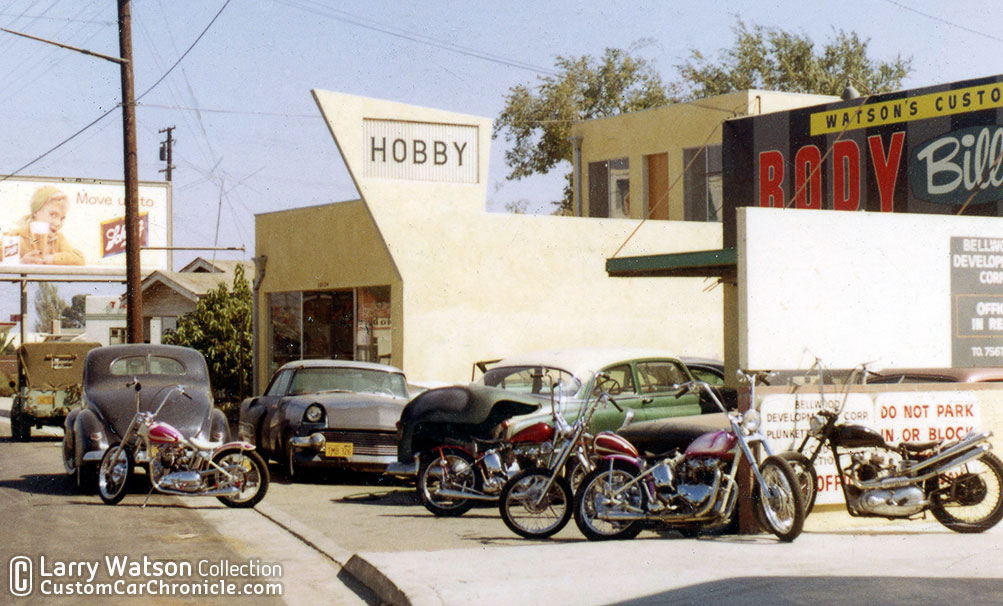 Bike parking at the shop. 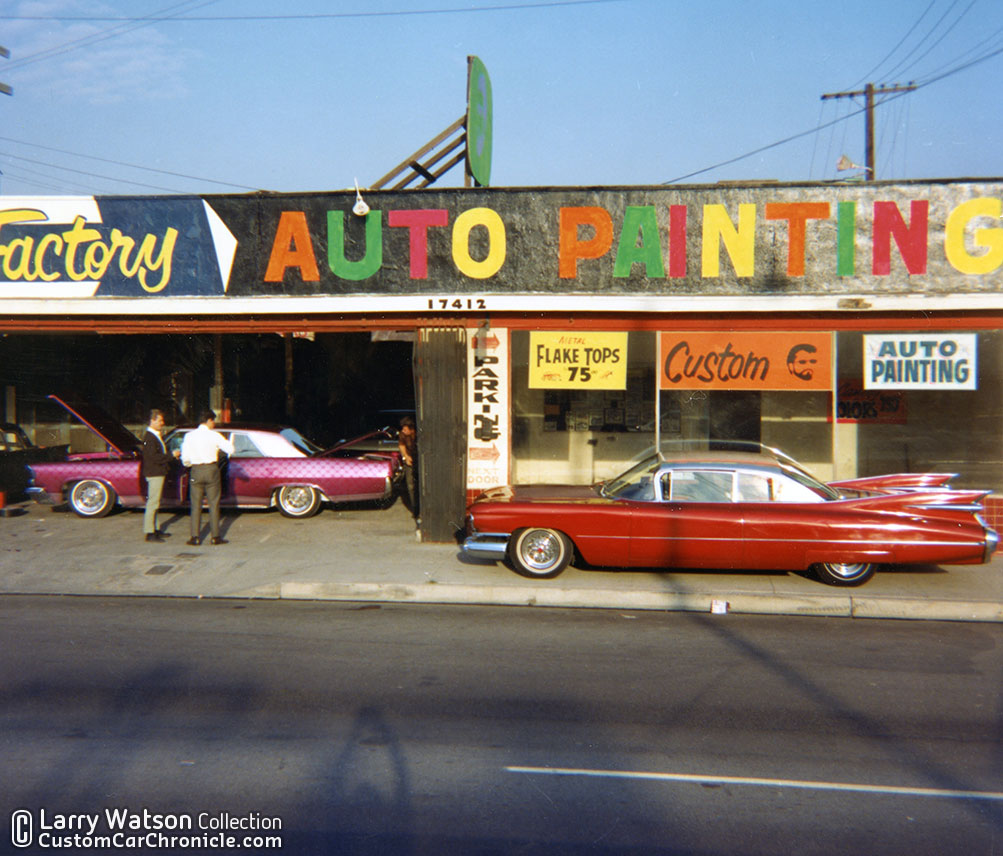 A nice snapshot showing 1963 Pontiac Grand Prix, Larry painted for Doug Carney, inside the shop and Calvin Weicamp 1959 Cadillac parked outside on the side walk. The photo it taken in front of Larry’s 17412 Lakewood Blvd. 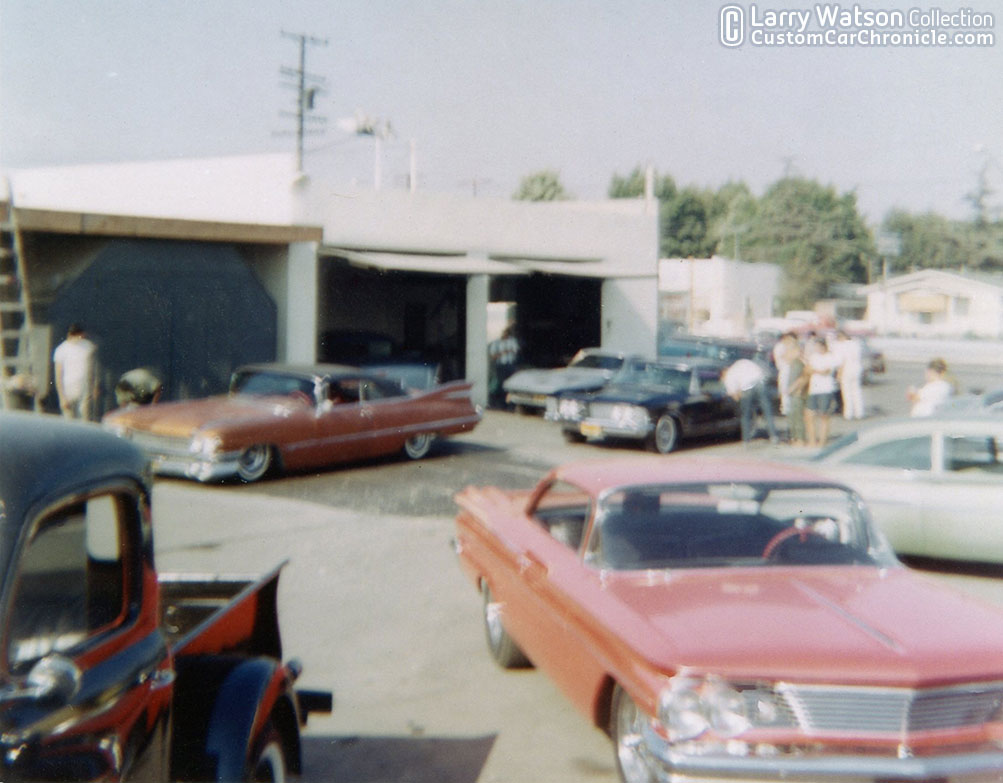 It is really too bad that these three snapshot are so blurry. There is a lot going on on these photos. Perhaps the photos were taken in a weekend and the guys were getting the cars ready for a show, or perhaps they were at Larry’s 14903 Lakewood Blvd. shop in Paramount, just to hang out. 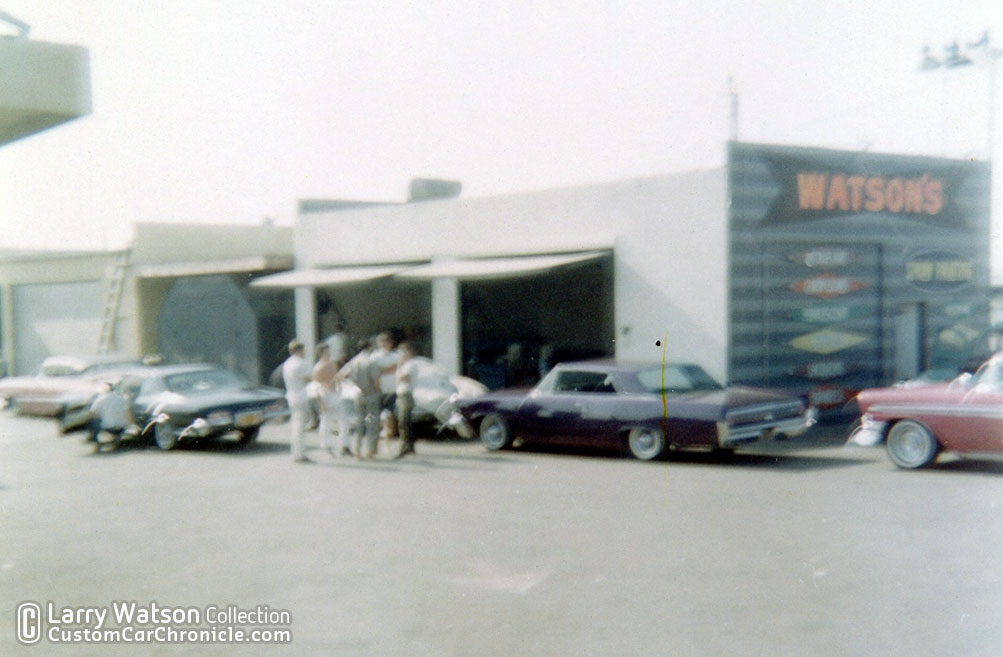 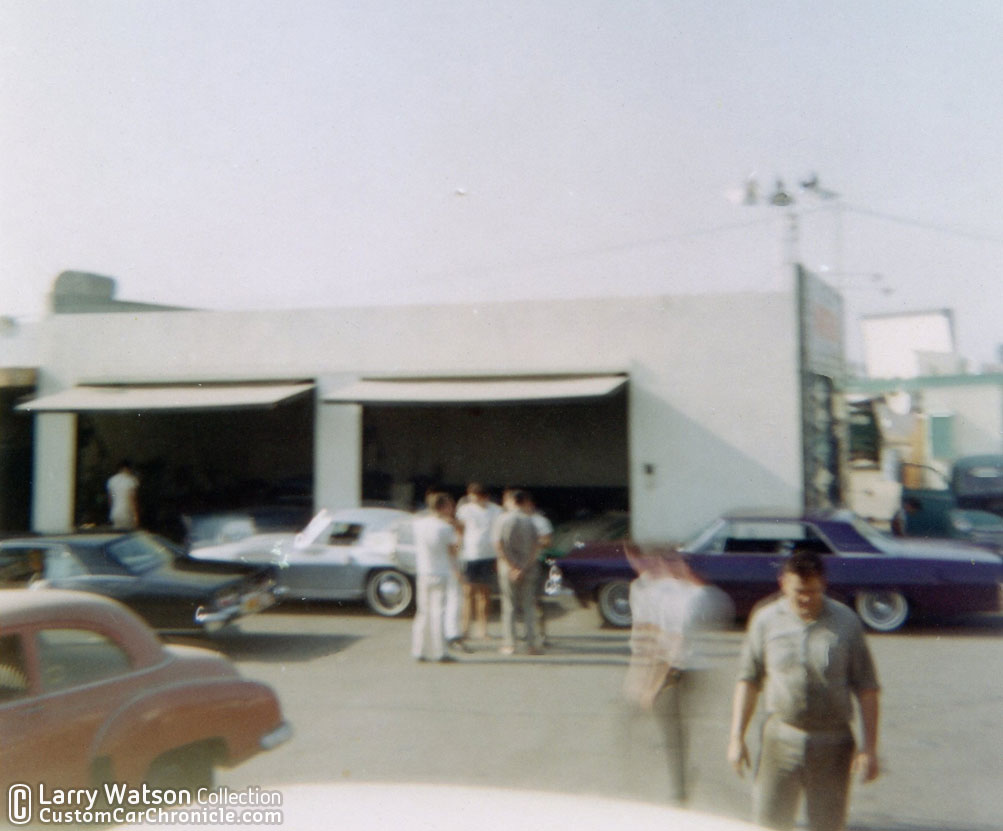 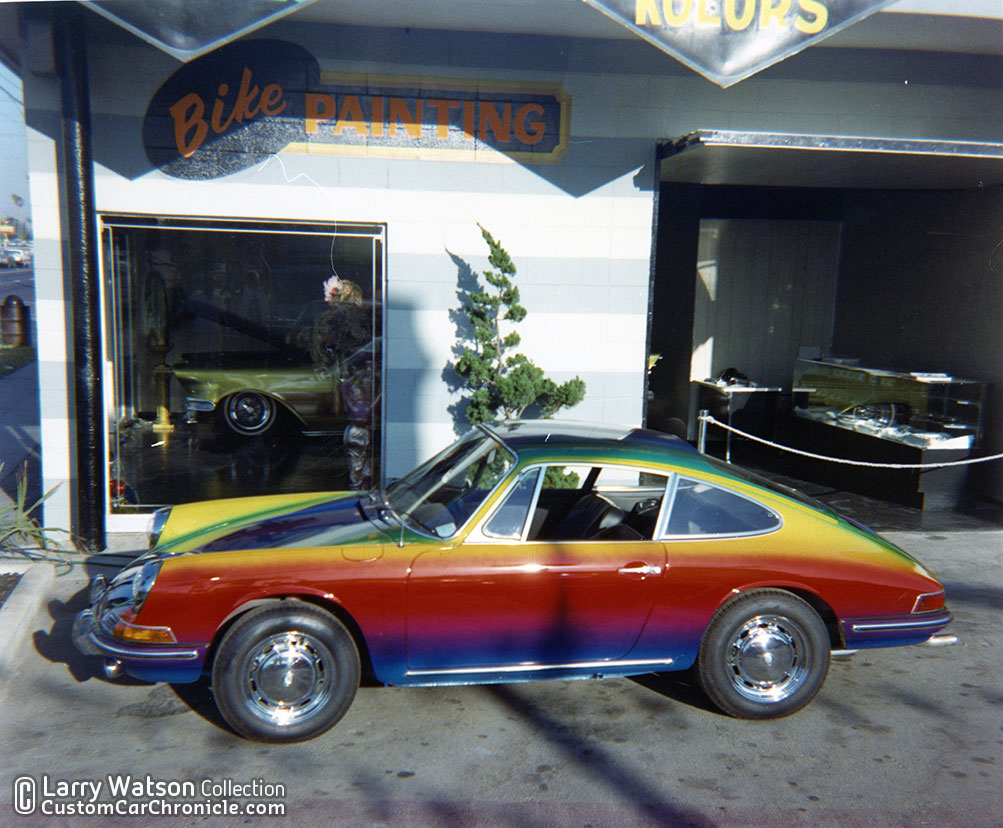 Larry’s shop in the later part of the 1960’s and early 1970’s was at 8730 Firestone Blvd. in Downey. Parked outside on the parking lot is a candy rainbow painted Porsche. Inside the showroom we can see the lime green painted 1955 Buick Busonic.

[box_light]This article shows a selection of photos from the Larry Watson Personal Photo Collection. More on Larry’s personal collection can be found in the Larry Watson section on the CCC-Site. Or on the Custom Car Photo Archive.
To see part One of the Parking at Watson’s click HERE.[/box_light] 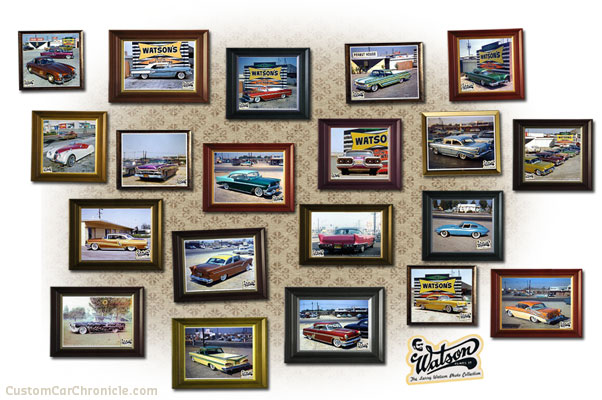 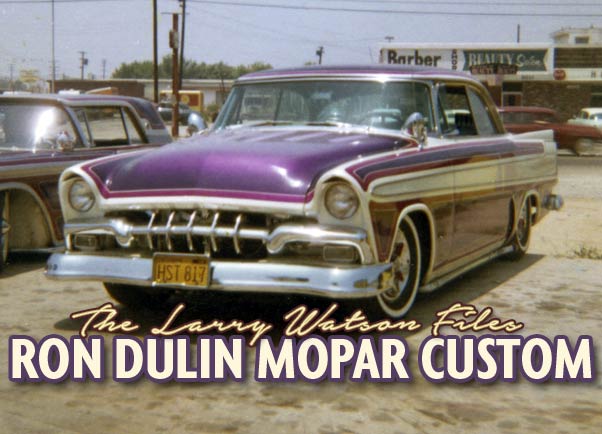 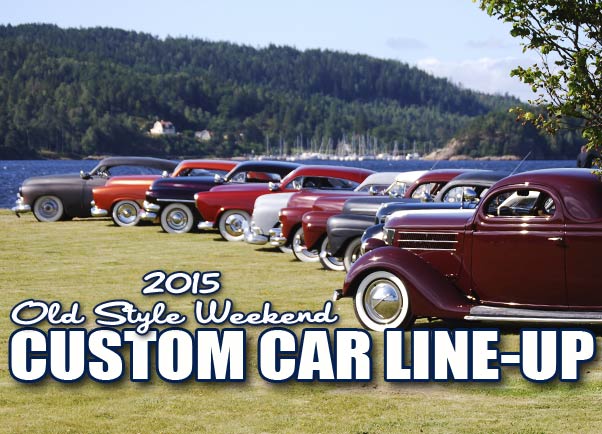 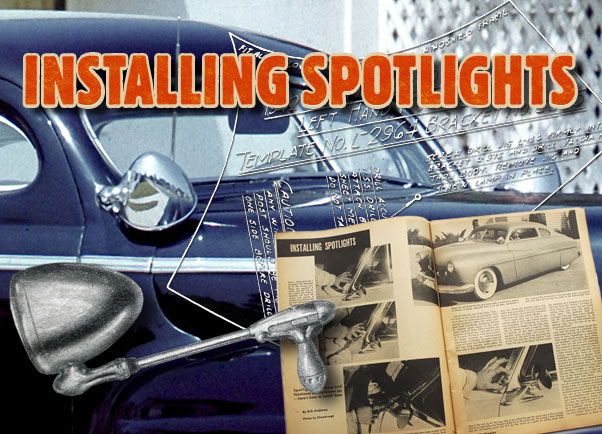 One thought on “Parking at Watsons part 2”