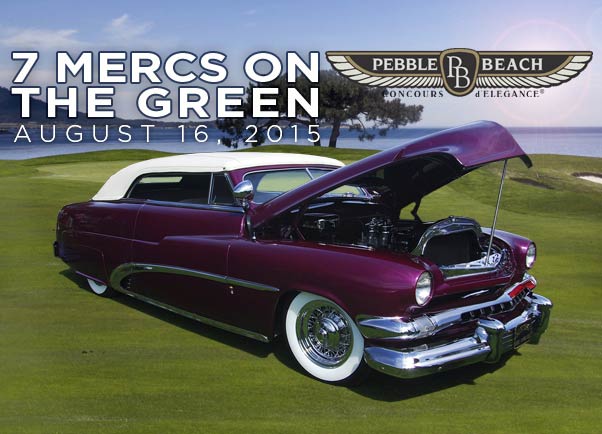 Ken Gross has officially announced the 7 1949-1951 Mercurys that will be part of the Mercury display at the 2015 Pebble Beach Concours.

August 16 is getting closer, and the team at the Pebble Beach Concours in charge of the 1949-1951 Classic Custom Mercury Gathering has announced the 7 Mercury’s that will be part of this special event. These 7 Historical Customs will look at their very best on the Pebble Beach lawn. Some have been completely restored some time ago, others are being freshened up, an one is currently being finished by a team who is working 7 days a week to get the car finished it time. The restoration team assured they will make the deadline of the show.

The 7 Custom Mercury’s that will appear at the Pebble Beach Concours d’Elegance:

Considered to be one of the first original chopped 1949-51 Mercury coupes restyled by Gil and Al Ayala. Conservative in styling with perfect proportions on the relatively mild chop. The angled forward front fenders with the DeSoto grille teeth give the car instant motion. First finished in lime gold by the Ayala brothers, later in 1953 redone by the Barris Kustom Shop for the original owner Wally Welch. Found and restored/modified by Joe Edie in the 1980, the car is now owned by Justin Mozart who had the car completely restored to the highest standard following the second version created by the Barris Kustom Shop. The Wally Welch Mercury was on the cover of the April 1952 issue of Hop Up magazine. More on the Wally Welch Mercury can be read HERE. 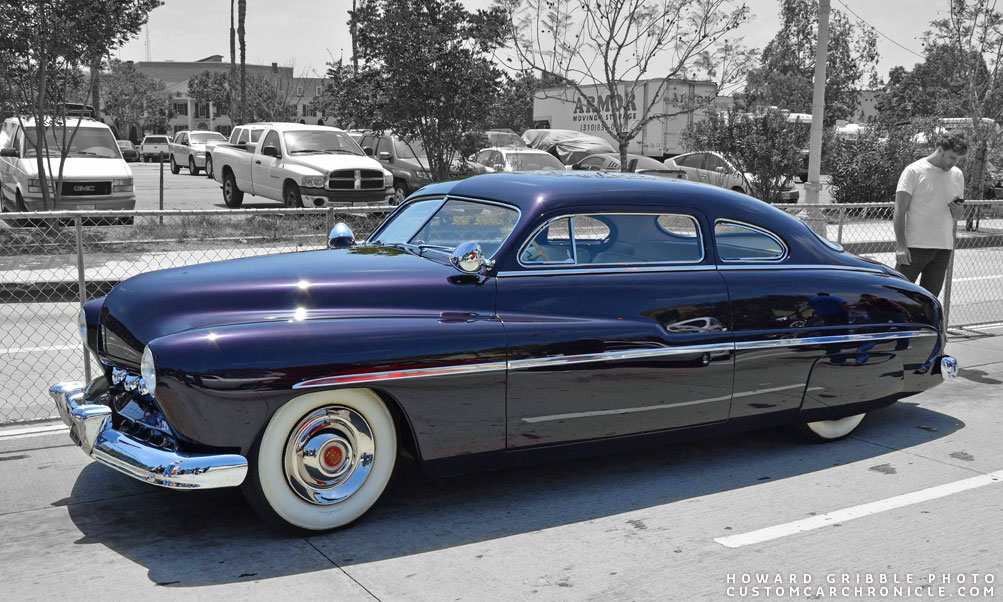 Customized in late 1950, early 1951 by Car Customizer Sam Barris, on of the two Barris brothers of the famous Barris Kustoms Shop. Sam built this Mercury in his spare time after work hours, as his own personal driver. The Sam Barris Mercury is listed as one of the very first 1949-1951 Mercury coupe bodies to be chopped. (You can read more about the original chopped Mercury’s in this CCC-Article.) Sam chopped the top with straight pillars, original length rear quarter windows and shaved drip-rails. He removed the door dogleg on the doors creating a wonderful full fadeaway. He smoothed the whole body until the desired overall appearance was achieved.  The car was featured on the cover of December 1951 issue of Motor Trend magazine and has played an very important role in how custom Mercs looks from then on. Sam did not enjoy the car for a very long period. Not to long after completion he sold the car, the car changed hands a few times, was updated with rounded hood corners, and door handle scoops amongst other things, and finally ended up at east coast of the US. Tommy Lee owned the car for a long time, before letting it go to the current caretaker John Mumford.  John Mumford had the Brizio Shop perform the flawless restoration. 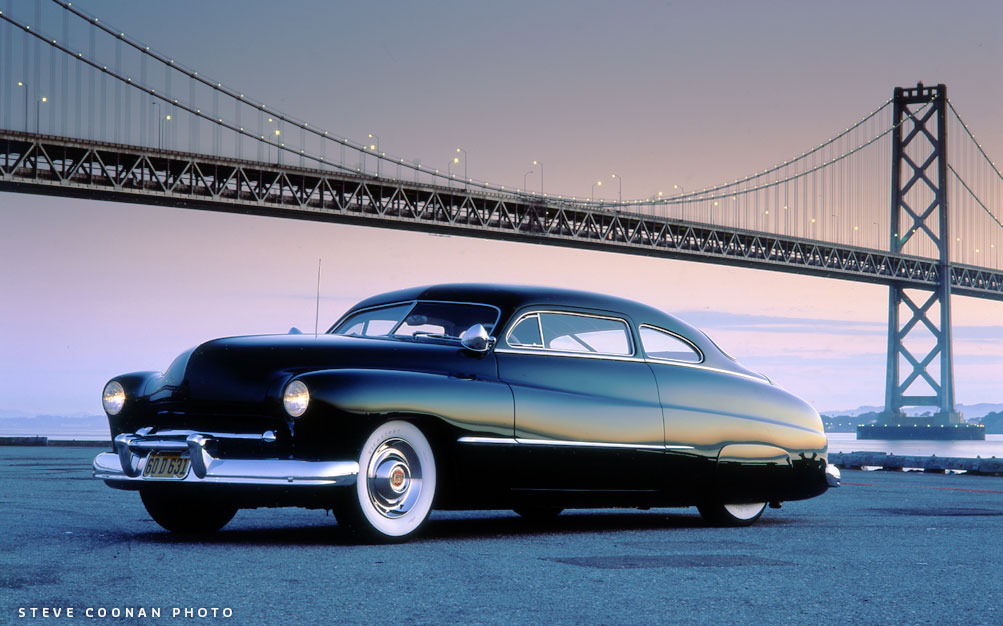 The Sam Barris 1949 Mercury will be shown by current caretaker John Mumford.
[divider]

Bob Hirohata worked part time at the Barris Kustoms Shop when he took his near new 1951 Mercury to the shop. He the Barris team to turn his Mercury into a wild award winning Custom Mercury. And that is what he got. The car was built in a record time of just two month to make a show deadline. George and Sam Barris went all out on the design of the Hirohata Mercury, the side window frames to make a semi hard-top where “borrowed” from the Nick Matranga 1940 Mercury. Theshape of the chopped top, and the new shape of the fender line all match the 1952 Buick boomerang side spear. The scoop on the rear quarters flows with these lines as well. At the front two 1951 Ford grilles were used,and at the back a set of 1952 Lincoln taillights was installed. Once the car was done it was painted sea-foam-green and dark organic green below the trim. The interior was handled by the Carson Top Shop and Bill Gaylords top, to make the show deadline. Bob used the car as daily transportation for quite some time, he even drove it from Los Angeles to the Indianapolis in 1953. After the car had appeared in the movie Running Wild the car shanged hands an started to have a bit of a rough life.

Current caretaker JimMcNiel found the car in the early 1960’s and has kept it ever since. He made it drivable to take him to high school and in the early 1990’s he was encouraged by his friend to finally start the full restoration of the Mercury. The car has been restored as much as possible as it came from the Barris shop. Junior Conway did the paint-job matched form original 1952 paint found on the car. The Hirohata Mercury is without doubt the most famous Custom and influential Custom Mercury of all time. If you want to read more about the Bob Hirohata Mercury, click HERE. 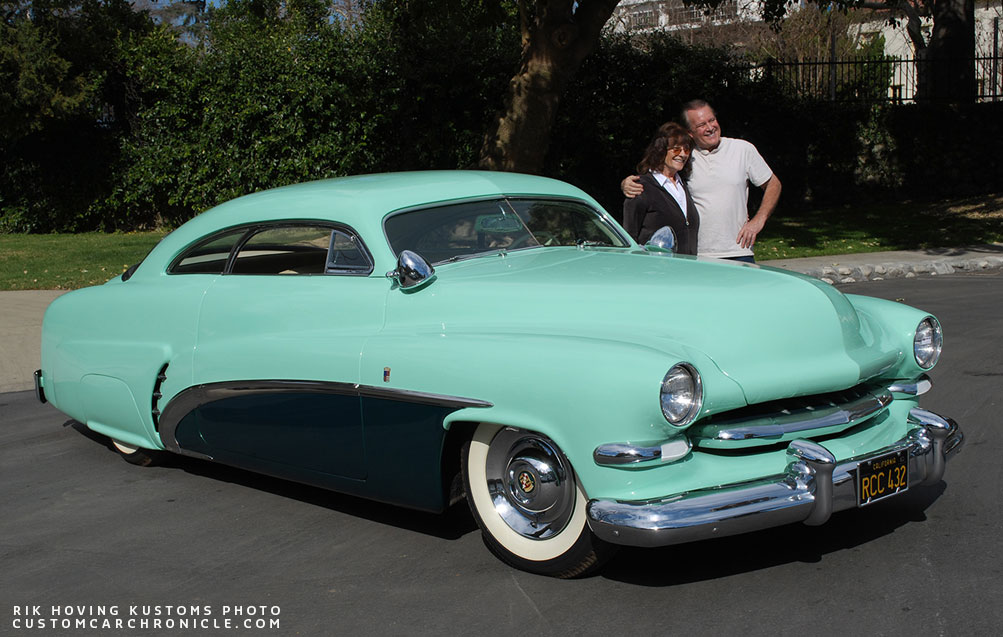 The Bob Hirohata Mercury owned by Jim and Sue McNiel. Here both are posing with the Mercury shortly before the car was entered for the Customs Then & Now exhibit at the 2011 GNRS in Pomona, Ca.
[divider]

Originally customized in the early 1950’s at the Barris Custom Shop for owner Ralph Testa. The Mercury’s windshield was chopped 3 inches and the Carson Top Shop created the perfectly shaped Padded. An 1951 Henry J grille, modified grille opening, 1949 Buick taillights, Buick side trim and deep purple paint make this a very classic custom. Ralph did not own the car very long and about a year after its completion the car could be seen cruising in Washington State. In the early 1990’s the car was completely restored by Bill Worden and his team of craftsman. Bill will install a set of authentic wide white wall tires especially for the Pebble BEach event. The tires will replace the white wall radials Bill initial installed so that he could enjoy the car on the road as much as he wants, but he feels like the car needs to look just like is used to do back in 1952, and the wide white wall bias-ply tires are part of that. If you want to read more about the Barris-built Ralph Testa Mercury click HERE. 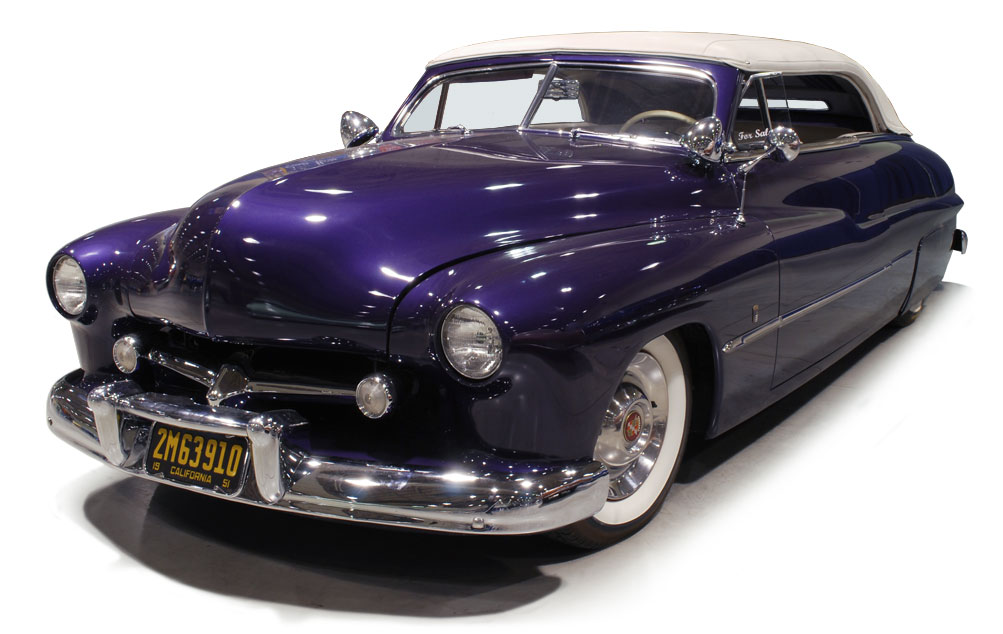 The 1949 Mercury was mildly customized for its star turn in the movie Rebel Without a Cause, which premiered at New York’s Aster Theatre in October 1955, just a month after James Dean’s death. Both Dean’s influential performance and his hopped-up Mercury became legendary symbols of the disaffected youth culture of the era, and the car has become one of the most famous movie cars in history. 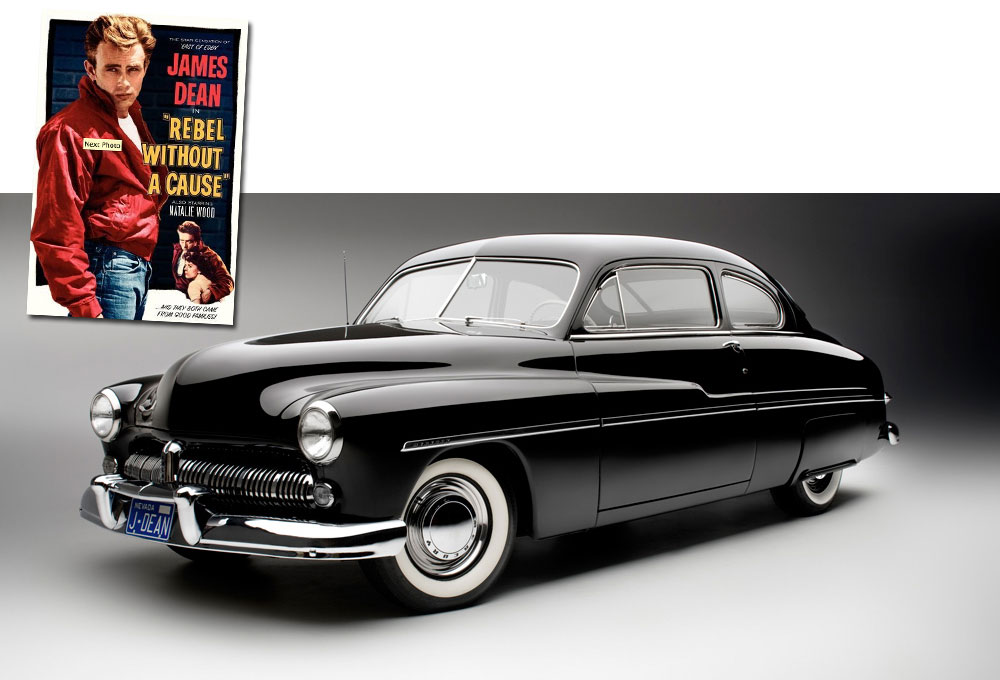 The James Dean Rebel Without a Cause 1949 Mercury will be on load from the National Automotive Collection.
[divider]

Fred Rowe of Los Angeles, California took his 1951 Mercury convertible to the Barris shop to have them restyle the car for him. The Barris shop chopped the windshield, shaved all the emblems and handles, modified the front of the hood, rounded the hood corners, frenshed the headlights and made a custom grill bar to fit the stock 1951 Mercury grille ends. At the back they installed 1950 Chrysler taillights low on the rear fenders. The Carson Top Shop created the nice flowing padded top and did the upholster in white and light gray.Barris painted the car in a stunning burgundy grape color. The car used fake wire wheel hubcaps for this version which where later replaced with real wire wheels. The car was finished in 1953 and featured on the cover of the August 1953 issue of Rod & Custom magazine. Later in 1954 the car was updated with a 1953 Buick boomerang side trim and a set of small scoops in the rear quarters, just in front of the side trim curve. This version of the Fred Rowe Mercury appeared in the movie Running Wild, the same movie that the Hirohata Mercury was also used for. The movie came out on December 1, 1955, and is available on DVD.

Fred owned the car till the early 1960’s, then the car changed hands a few times till it ended up in the hands of Bill Layman, from Pensilvania, many years later. Bill set out to restore the car as closely as possible to the Barris version used in the movie Running Wild. The car was painted black when Bill got the car, but he was able to find the original Barris color on one of the fender skirts, and the original base and top colors were matched from this. The car’s restoration was completed in 1989. A few years after completion Bill sold the car and the car became part of the Milhouse collection. In 2012 the Fred Rowe was sold to its current caretaker, who will show it at the Pebble Beach Concours.

The Leo Lyons 1950 Mercury was build over a period of several years. Leo found a way to get some support from the Ford Motor Company who enabled Leo to use a Mercury frame, and body panels. Leo also had the help of Custom Builders George and Sam Barris and had panels shaped for his “Ultra Modern Merc” by the famous California Metal Shaping company. The Mercury appeared on the cover of the February 1960 issue of Custom Cars magazine and its unique styling features was used in numerous other magazine in the 1960’s. Geoffrey Hacker bought the car in rather sad condition in 2013. Together with friend Rick D’Louhy, Geoff decided o restore the Mercury to its former 1960 cover appearance. A team of fine crafts man is now working around the clock to have the restoration finished in time for the 2015 Pebble Beach Concours. 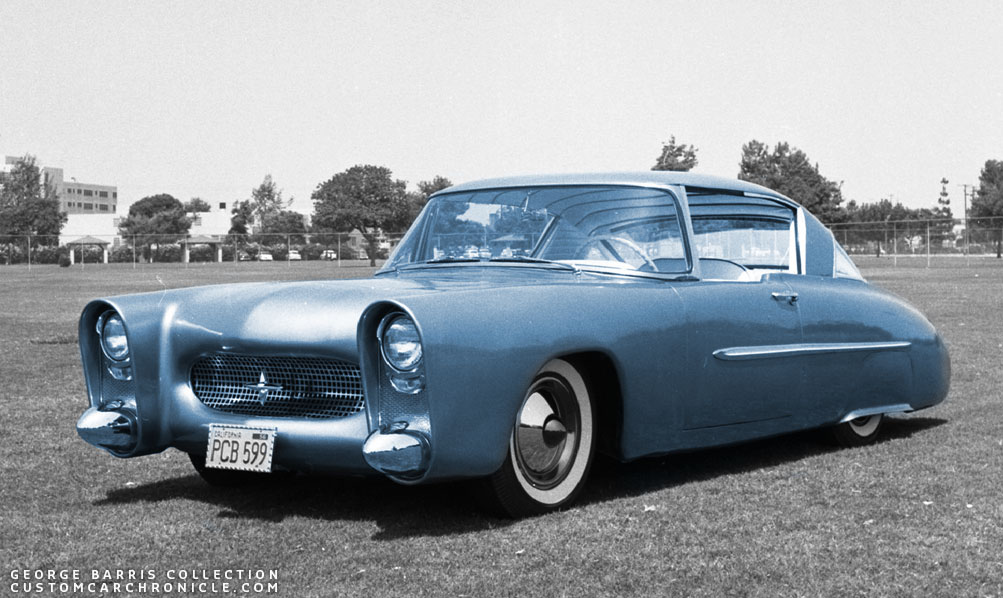 Geoff Hacker and Rick D’Louhy will bring the Leo Lyons 1950 Mercury. The restoration team is currently hard at work to get the car ready in time for the Pebble Beach event.
[divider]

These are the 7 1949-51 Mercury’s that will make up the Mercury gathering at the Pebble Beach Concours. However Ken is still on the lookout for other historic Mercurys. If you have any suggestions, or know more about the current whereabouts of an historic custom Mercury that would fit this event, then please contact us. 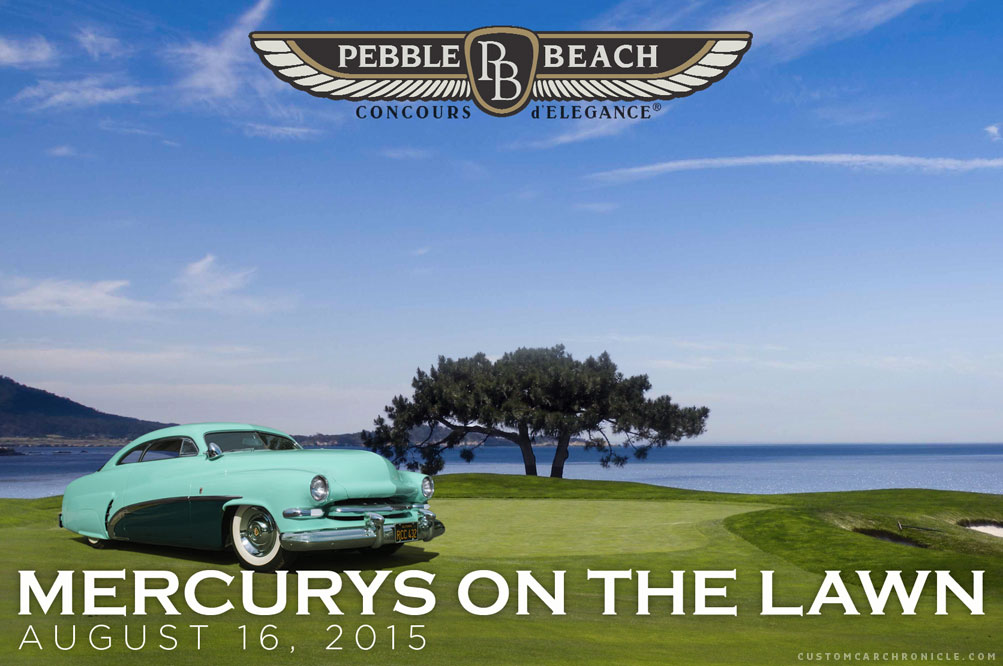 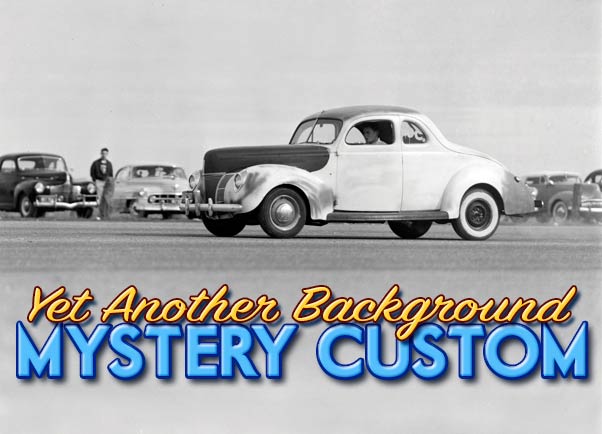 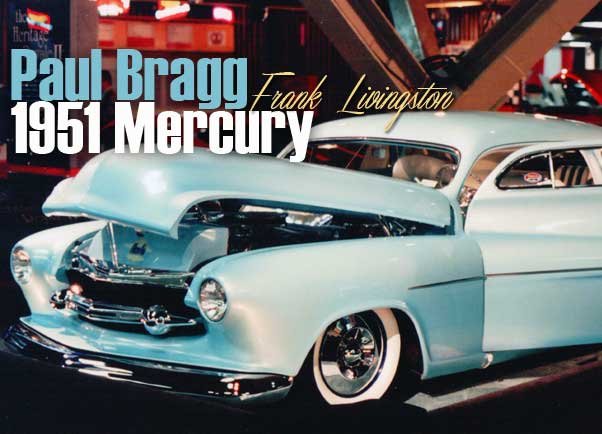 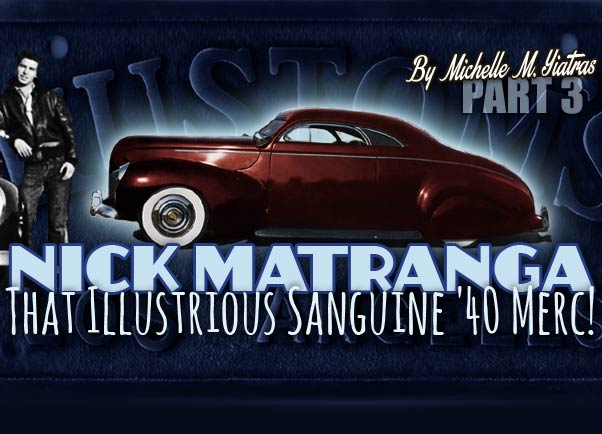 2 thoughts on “Mercs that will appear at Pebble Beach”