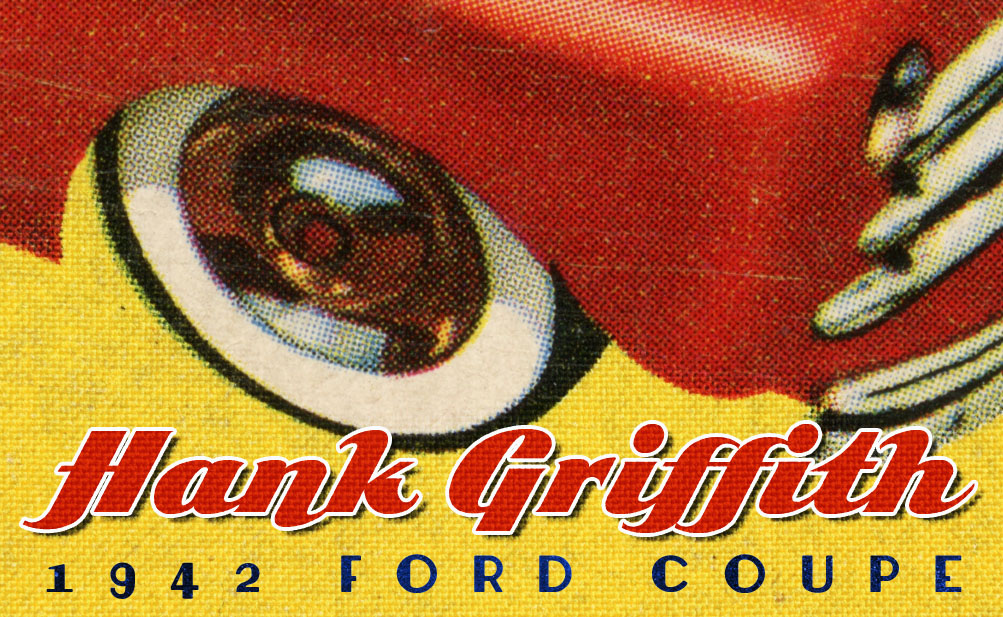 In 1951 Hank Griffith’s 1942 Ford was one of the two feature cars on the cover of Custom Cars the Trend Book No. 101. Not just any book, Trend Book no. 101 is one of the most important early custom car publications.

This booklet had two cars on the cover. A Sports Custom, done by the Coachcraft shop colorized in green. And a 1942 Ford colorized in red, which was named as an Ayala custom owned by Hank Griffith. This particular red car is the lead actor in this article. Recent information (2014) shared by Hank’s wife Janet, shed some new light onto this early 1950’s custom cover car. 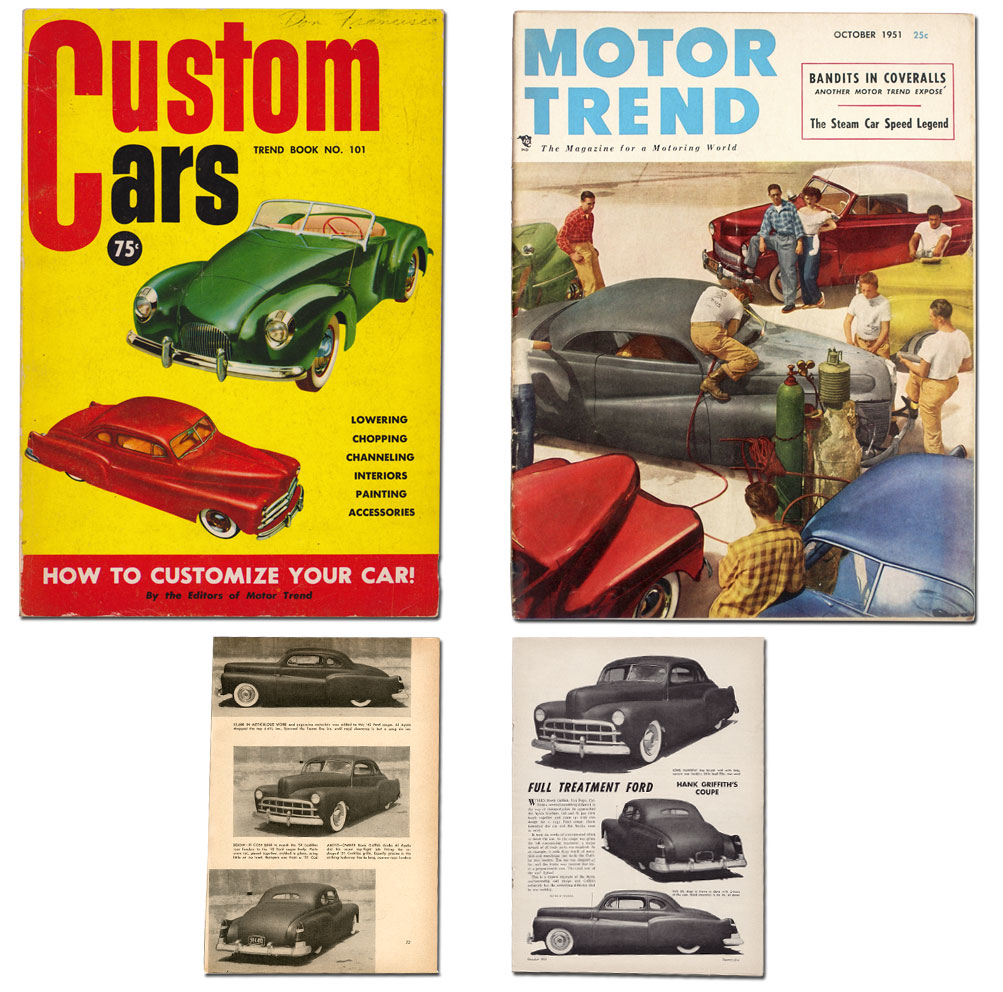 Hank’s 1942 Ford was featured in the first Custom Cars annual as well as in the October 1951 issue of Motor Trend magazine. Both featured used the same photos of the car in dark primer.
[divider]

Besides being on the cover of the first Custom Car Annual, Hank’s ‘42 Ford also had a full page with three photos on the inside. The write up listed Hank’s Ford as being customized by the Ayala shop and it says they chopped the top 4 and 4,5 inches. A similar write up also gives the Ayala brothers building credit in the October 1951 issue of Motor Trend magazine, in which the car also had a full page article (both magazines were published by Trend Publications). From then on this car has always been known as an Ayala custom.

However the car was always different than most other Ayala built customs. The Ayala’s were known for their smooth, teardrop shaped, slippery chopped with flowing lines front to back custom creations. And this car was quite a bit different. The fade away fenders and Cadillac grille and taillights all made perfect sense for an Ayala built custom car. But the shape of the chopped top – with the near stock proportions, the drip rails still in place and the chopped mail slot sized – instead of leaned forward full size -rear window, always felt a bit strange on an Ayala Custom. While Hanks Ford was very nice, it did not really fit this Ayala theme and now we now know why… 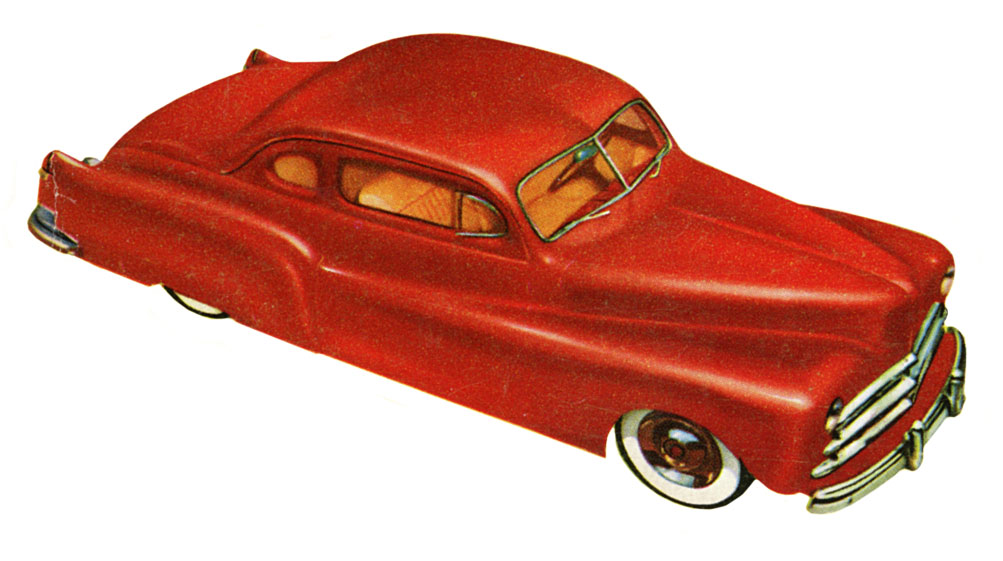 Janet Griffith‘s son had pointed out the Custom Car Photo Archive website to his mother. There Janet read that Hank’s Ford was featured in the Ayala folder. Janet decided to contact us. One of the first things Janet Griffith told Custom Car Chronicle was that it was in fact Hanks’ good friend Ray Saconi who performed the top chop the car. The rest of the body work was done at Gil Ayala’s shop. Most likely the journalist who did the write up on the car for the Trend Publications forgot about Ray doing the chop. Or figured it would be best to give the better known Ayala shop all the credit. So he left out Ray’s name in the write up which was used by several publications. Hank never showed his car much at shows, so not many people knew the real story on the car. 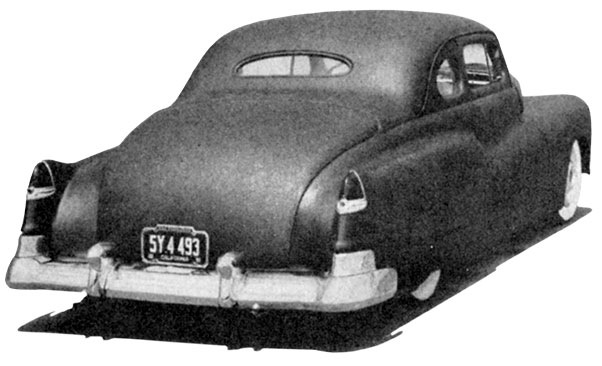 Lets take a step back to 1948 when Hank bought the car for $200 after finding an ad for it in a local Pasadena news paper. Hank started working on the car in 1949 when he lowered the suspension and later lending a hand when his friend Ray Saconi chopped the top on the long door coupe. With the chop done he took the car with a set of 1950 Cadillac rear fenders, two doors and grille to Gil Ayala’s Auto Body Works in East LA, with the question to make a very spectacular and unique custom for him. 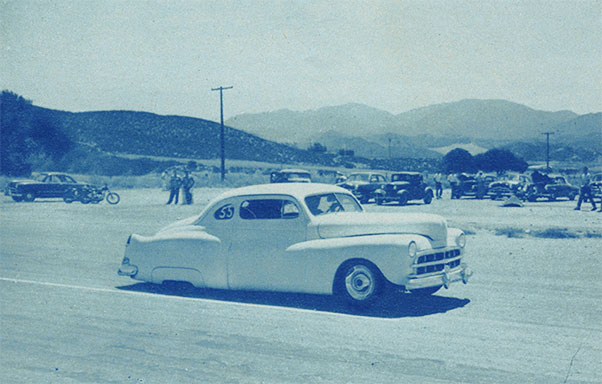 Hank’s Ford was not all looks… it had a tuned Flathead engine and was pretty fast, and Hank loved the race it.
[divider]

The stock Ford rear fenders were removed and the Caddy rear fenders modified to fit the Ford body, welded in place and once fitted with new front corners leaded smooth into the body. The front fenders were extended at the rear and the Cadillac doors used to create the fade away panels all the way to the back of the door where they meet the rear fenders. The new rear fenders ended at the rear edge of the door. This create a whole new look for Hank’s “Old” 1942 Ford in 1951. All body trim and handles were removed and electrical push buttons installed to open the doors and trunk. The trunk also received rounded corners to make it flow nicely into the top. The Ayala’s first painted the car in a dark gray primer and this is how it was shown in the Custom Cars annual in 1951 as well as in Motor Trend magazine feature and covers. Strangely the car was colorized in red for the CCA cover and in blue for the MT cover.

Sometime later the Hank Griffith 1942 Ford was painted in white primer as we can see in the 1951 issue of Hop Up magazine as well as the two wonderful photos from the Griffith collection shown here on the Custom Car Chronicle site. 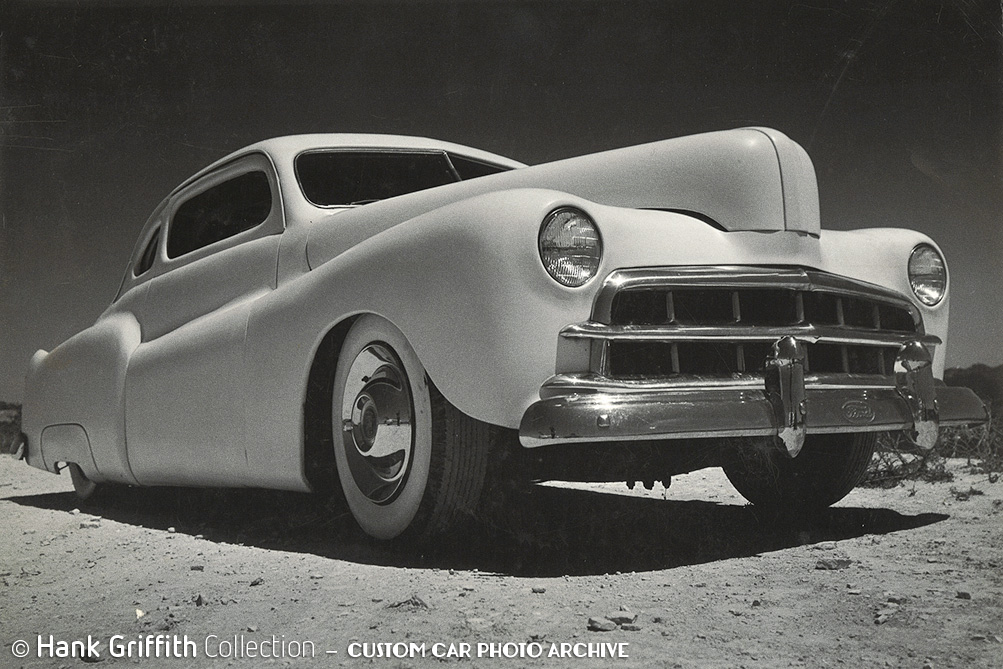 Hank not only wanted to have the good looks, but also wanted to have a fast car. So he took the Ford to a guy who owned a gas station and did engine tune ups in the town of San Fernando. He tuned the engine with a modified cam, Navarro heads, dual exhausts and four bore carb. Hank raced the car up at Saugus, California and won several races. The car got to a top speed of 84 miles at the 1/4 mile… in 1951 with a heavy car! Hank also remembered when Barney Navarro bought one of the first 1951 Fords and altered it (Hank doesn’t remember what Navarro did to it), they raced and to his delight he beat Barney’s 51 Ford.

In 1952 Hank had his friend Ray Saconi paint the car in a wonderful metallic root beer color. He had the upholstery of the car done in a gold colored leather. Unfortunately he could not remember the name of the shop who did the wonderful job. They redesigned the rear seat as a wrap around version, which was called a “Love seat” back then. When the upholstery for the car was finished. The upholsterer asked Hank to show the car at an LA show. To show-off the wonderful interior and to help promote the great work this upholsterer did. It was the only show Hank would ever enter the car, and only because the upholsterer would not charge Hank for his work. Hank has no idea if this ever helped the guys business or not. But he was happy with the deal. Hank is very laid back and everything he did with the car he only did for his personal enjoyment. Hank was also a member of the Auto Butchers E.LA Car Club. 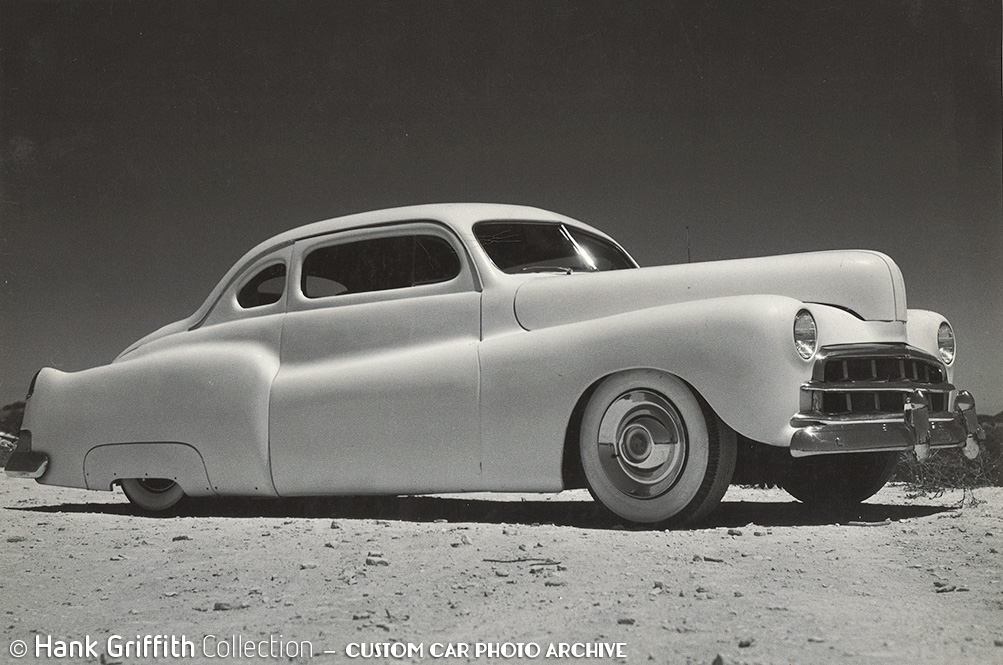 When Janet started dating Hank in 1952 the car had already been completely finished in metallic root beer. She has fun memories of the car. She always felt very special when they went for a ride or a date to one of the Big Boy drive-ins to have a burger, or go elsewhere for a dance. In 1953 Hank and Janet got married and shortly before that Hank decided to sell the car thinking it wasn’t really a right family car. He sold it for $2500.- to a man who bought the car for his grandson as a gift. This man was the owner of the Hertz Rent – a – Car in Los Angeles someplace. Hank’s uncle (who lived near Hank in San Fernando) followed Hank to L.A. when he delivered the car. And gave Hank a ride back to San Fernando. Hank never saw the car again after this and he has no idea what ever happened to it.

Unfortunately Hank and Janet never took photos of the finished car in the wonderful root beer color. But they did hold on to the two amazing photos of the car in white primer shown in this article. 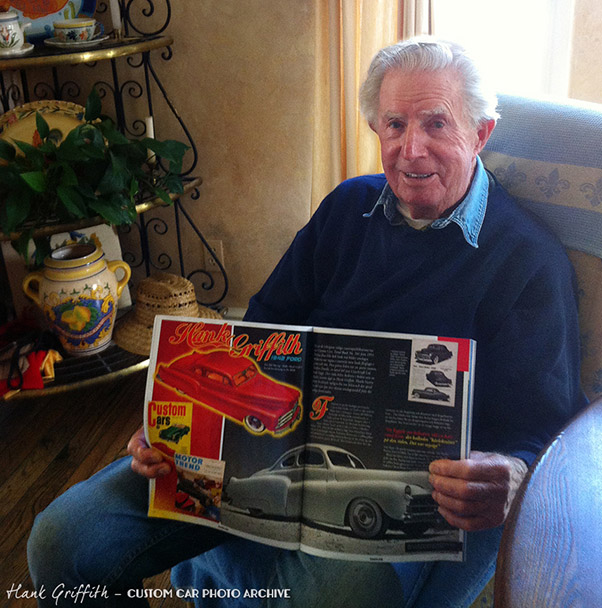 Hank Griffith June, 2013 with the feature on his 1942 Ford Custom in Swedish Gasoline Magazine.
[divider] 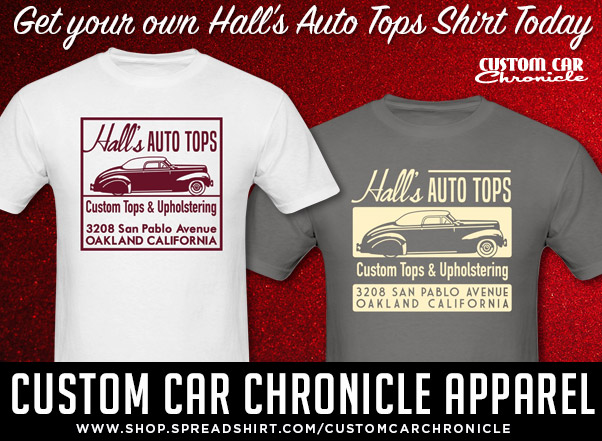 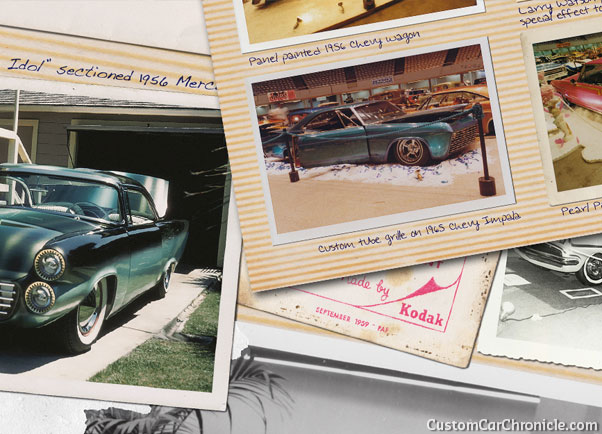 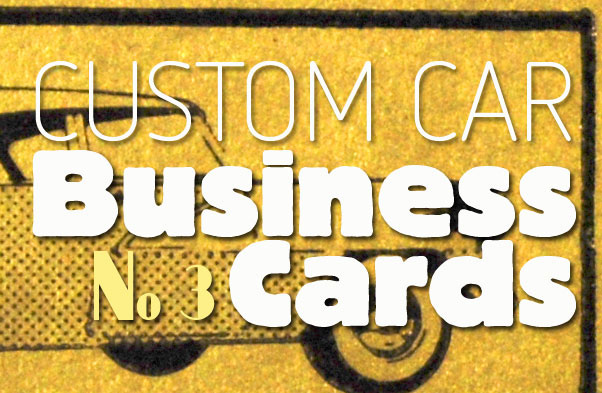 Was Elvis in the Auto Custom Shop? 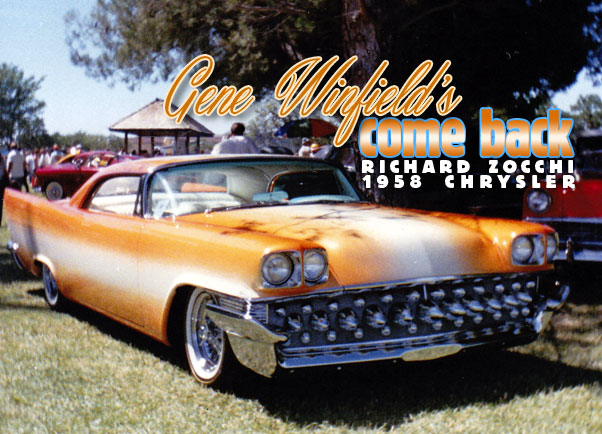