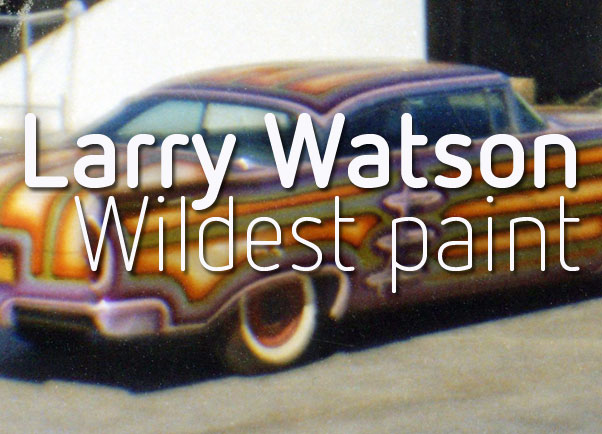 Larry Watson was known for his incredible paint jobs. From wild flames, lace or scallops, to super straight, single tone pearls, and candies. But I think that this 1955 Mercury is one of his wildest paint-jobs he ever did. 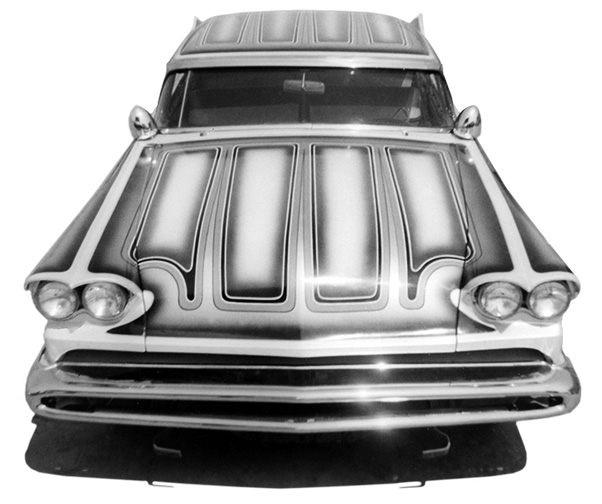 The strange thing about this wild custom is that we were unable to find a name to go with the car. This car is featured everywhere: in magazines or on the internet, and never the owners name is mentioned. Which is kind of odd, since the car was so wild, and photos had appeared in several publications. We contacted several people, they all recognized the car. Even Larry was asked about the car not to long before he passed away, and this is how he replied.

“Wild, very wild Custom, beautiful lines, but I cant remember where it went, who it owned, or who built it.” 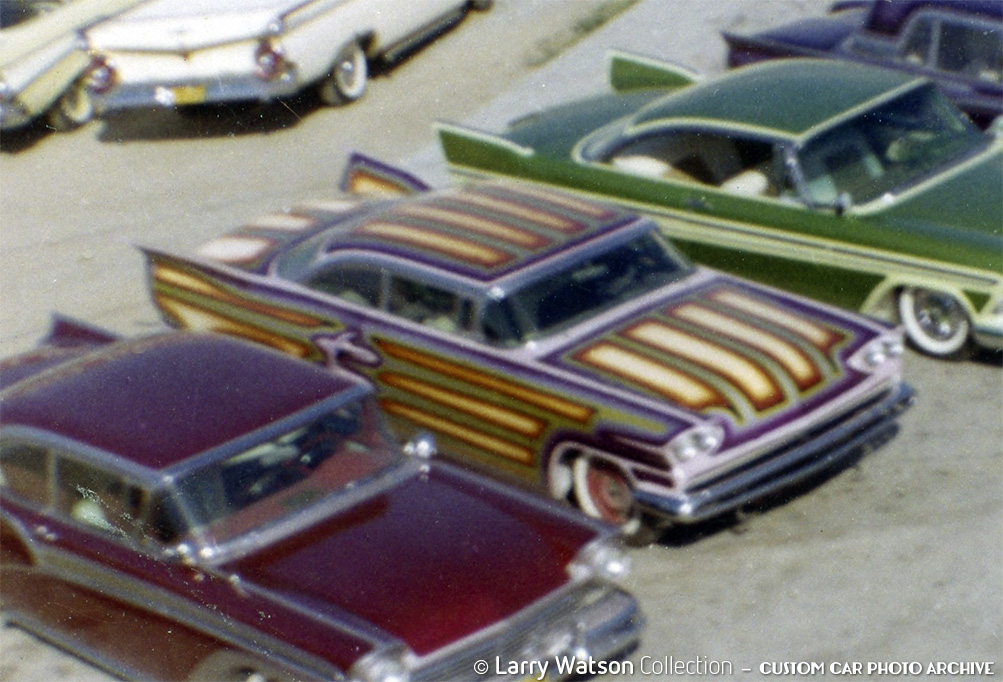 Above we can see Dave’s 1955 Mercury, together with a few more Watson painted cars, at Larry’s Rosecrans Blvd shop parking lot.

We asked Gary McNaught, who was working with Larry Watson during the time this car was built. He clearly remembers sanding the fantastic customized body of the car. And getting it ready for Larry to lay down the scallops, and panels. Followed again by Gary, who taped off the rest, so Larry could paint it. But also Gary could not remember who owned the car. No name, no face, no nothing!

When the Custom Car Photo Archive got access to the Larry Watson personal Collection, we decided to do an magazine article about the car. It was published in the Swedish magazine Gasoline. And the sub-title was “The Mystery Merc”. The Custom Car Photo Archive also posted some photos of the car on their website. The moment the magazine was available in the bookstores, several sources mentioned the car belonged to a guy named Dave Kyte… ,so that part of the mystery is now solved. But we still do not know who, besides Larry Watson, worked on the car. 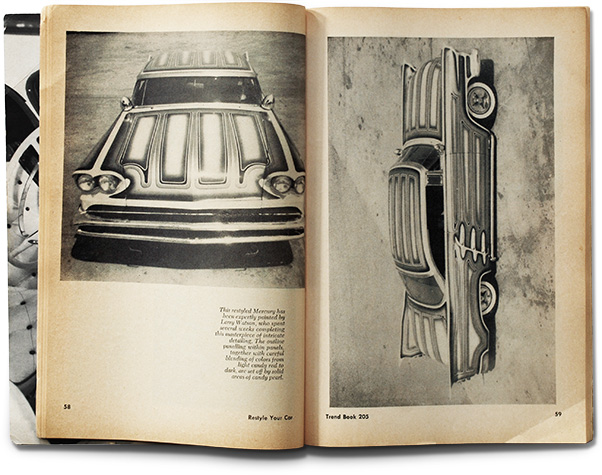 The car had a full spread in the 1961 Restyle your Car Trend book by James Potter, two large photos and fair portions of text, but no owner name was mentioned.

The Mercury has appealed to many people, since it  was seen in the Restyle your Car book. We were even more impressed with the car, when we received the series of photos from this car from Larry’s Personal Photo Archive. Strangely enough most of these photos – except the a few of the car in progress – are in black and white. Which is odd since they were taken in an era when it was quite common to take color photos. Besides that, most of the photos in Larry’s Collection are in color… Most likely, these photos were taken especially for the Custom Cars annual, or possibly for other publications in the early 1960’s. Back then, black and white was all that was needed for the inside.

Below are two photos of Dave’s Mercury, while Larry worked on the car. The first one shows how much taping was needed for the many different colors and patterns used on the car. 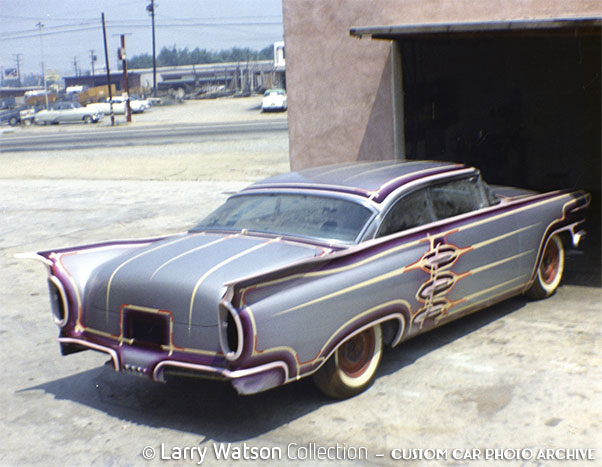 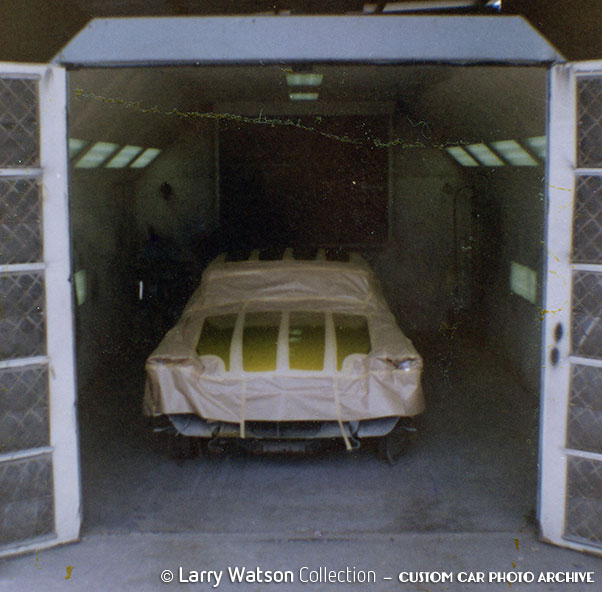 The customizing on this 1955 Mercury is as wild as its paint job is. But it is all very well balanced. So more than likely a well know shop, or builder, was responsible for building the car. Perhaps it was built at the Barris shop. We did find one photo of the car parked in the Barris Shop drive way. It could also have been Bill DeCarr, who customized the car. He worked closely together with Larry Watson, and started his career at the Barris shop. 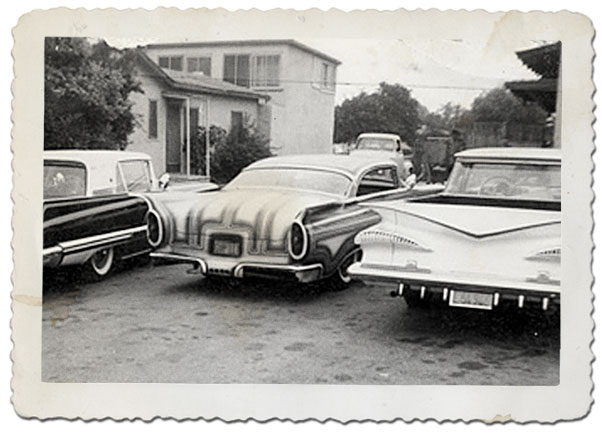 Above shows the car, still with no rear bumper, installed at the Barris shop.

The top was chopped, which is not an easy task on this type of car. The rear quarters where reshaped – and has now large functional scoops. The rear fenders where extended, and reshaped to end in a fine tip. Custom made taillights created from three lenses, on each side in a custom made opening. Underneath it looks like the rear bumper was replaced with a two part 1955 Pontiac rear bumper – but strangely enough in none of the photos, I’ve seen of this car – a rear bumper was put in place. 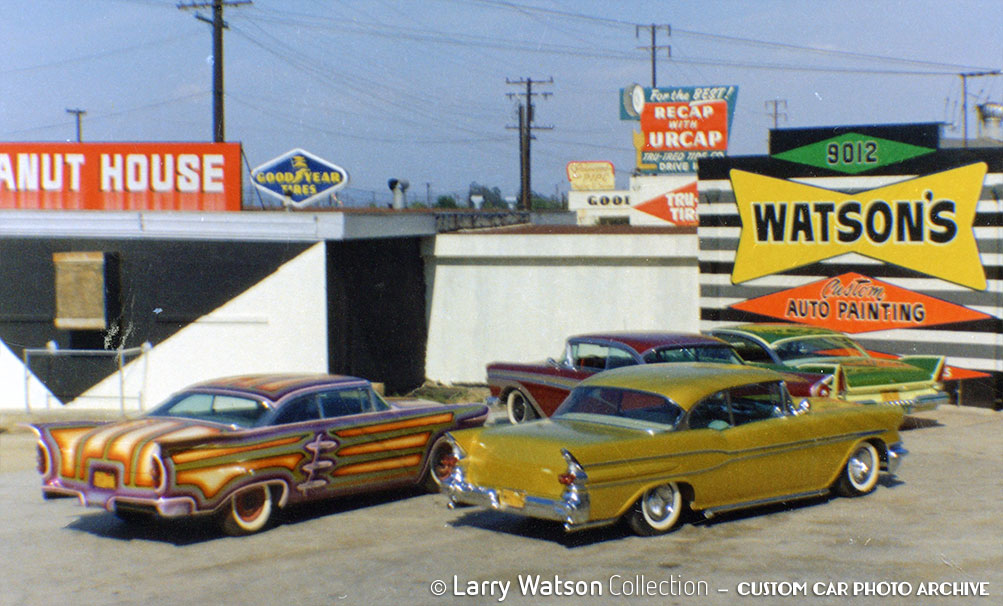 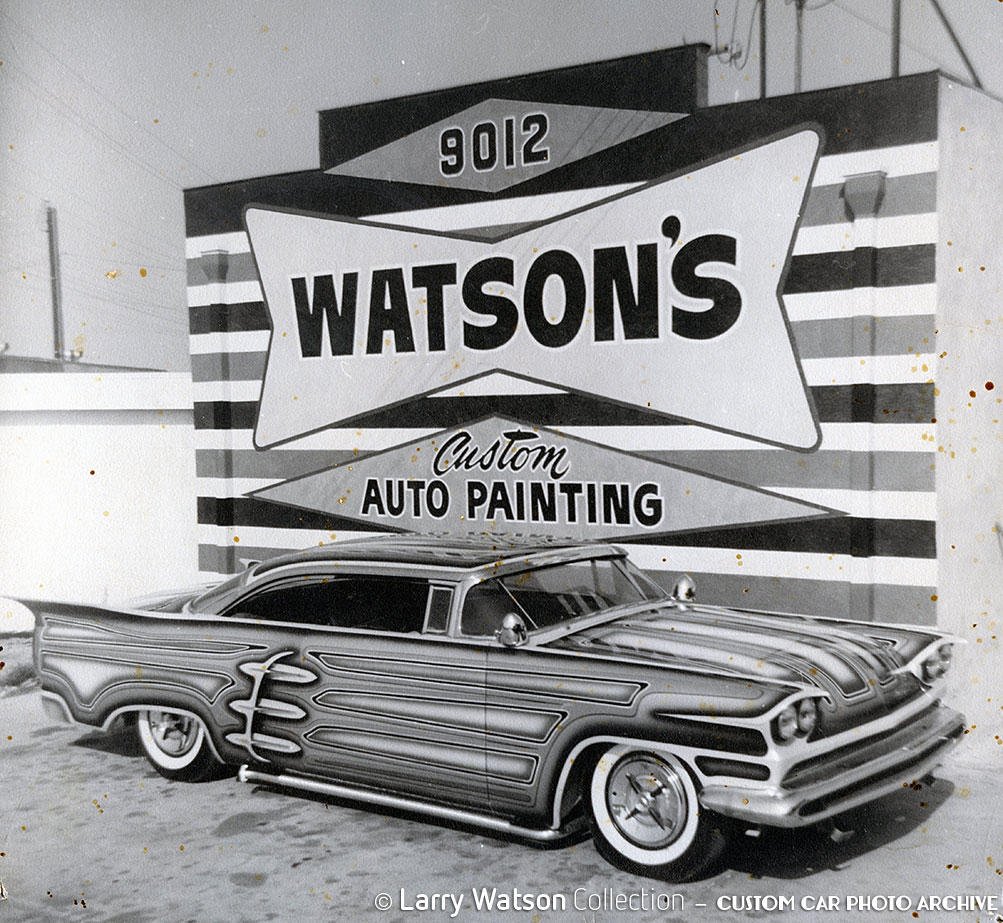 The photo above was taken in front of the colorful Larry Watson Shop wall at his Rosecrans Blvd.  shop. I wish we could show you this photo in color. It must have been so intense with all the bright colors on the car, as well as the wall behind it. Not that the windshield has an extra divider on the passenger side, just above the dummy spotlight. As far as we can tell this is only on this side of the windshield, most likely because there were some fit problems after the chop?

The license plate is set into the body just below the trunk. In the panel below that – in between the split bumpers – four exhaust pipes exit.
At the front, the fenders where widened to accept quad headlights, and just as on the rear, the fender top center was extended and peaked. The hood had to be narrowed at the front to make space for the new headlights. The grille opening was reshaped, and the bumper replaced with a bumper grille unit from a 1957 DeSoto. The lower portion is in none of the photos installed. 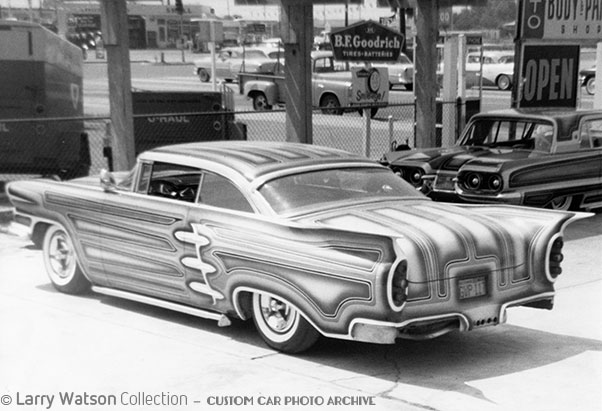 Then it was time for Larry to lay down one of his most dramatic paint jobs. Lavender, and Lime gold, with purple fading, panels in pearl white fading, to burnt orange, and white outlines. Lancer hubcaps on wide whites, and lake pipes are all standard for the late 1950’s. when this car was built. 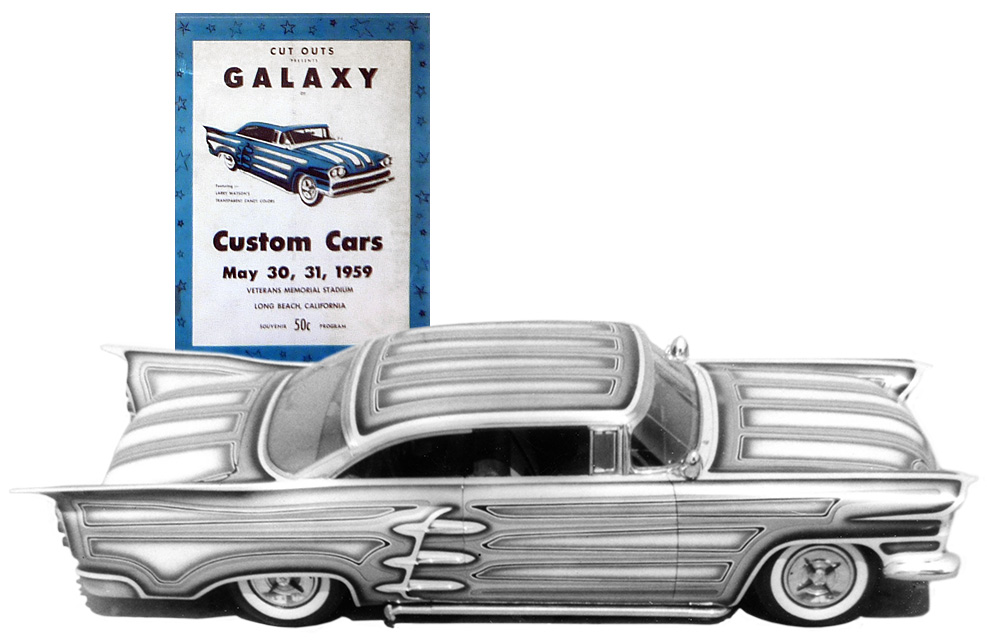 We have no idea what happened to Dave’s 1955 Mercury. Was it perhaps repainted at a later date? Is it destroyed? Or is it still around, stuck away in someone’s garage?

Who knows more about this early very wild Larry Watson panel fade paint job, or who knew or knows Dave Kyte and can tell us more about his Custom Car years? If you know more, please leave your comments here, or get in touch with us thru the website. 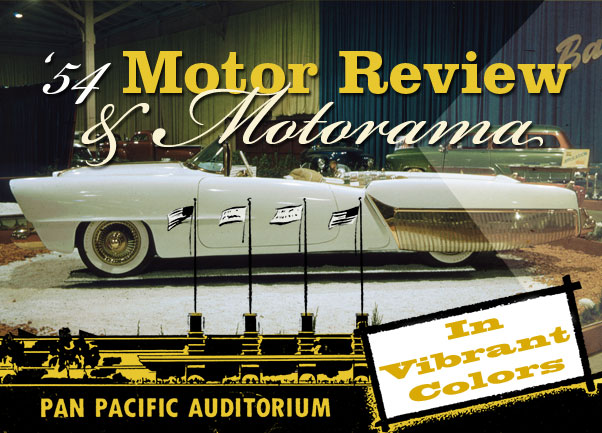 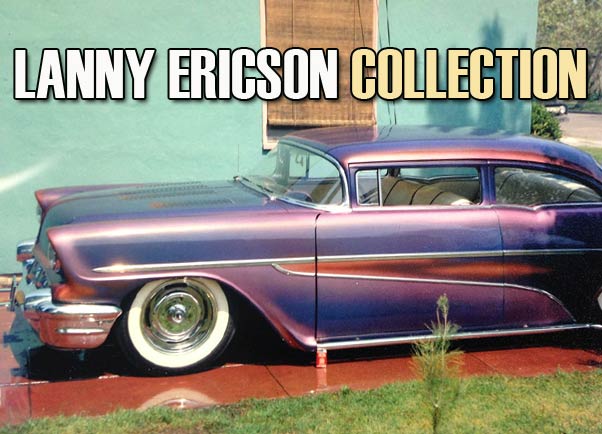 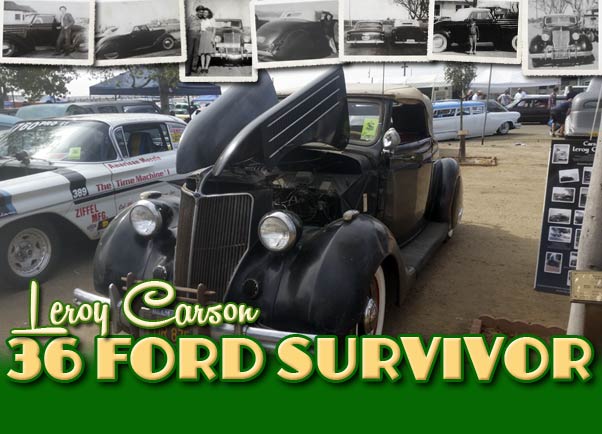