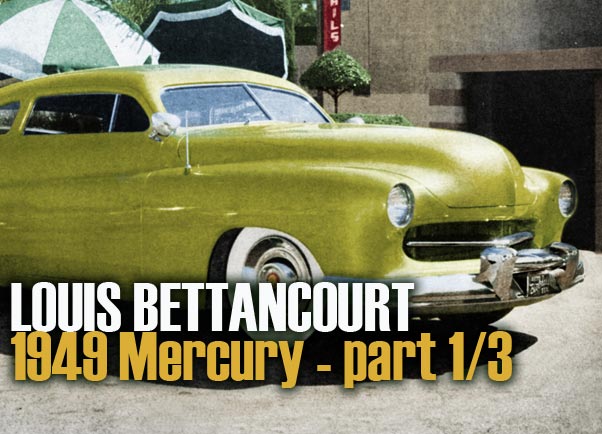 The Louis Bettancourt 1949 Mercury is one of the best known and arguably the best looking 1949-51 Mercury’s. Originally built by the Ayala brothers, it became really popular after the Barris shop redid the car in 1953.

This is part one of a three part series on this beautiful, and well known 1949 Mercury. This first article we will concentrate on its first version, as it was done by the Gil (Ayala) Auto Body Works Shop in the early 1950’s. 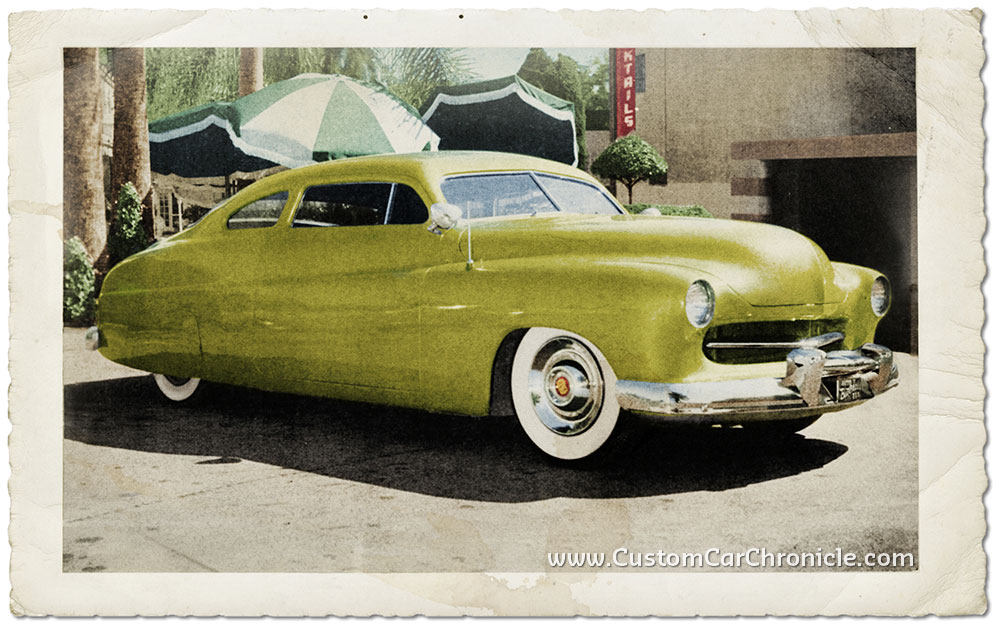 Colorized photo by Rik Hoving, based on a photo taken by Jack Campbell, (not related to Marcia Campbell) for the “restyle your car” from 1952.
[divider]

[dropcap]G[/dropcap]il Ayala and Louis “Luigi,” were good friend and our guess is the car was at Gil’s shop, and many ideas were discussed before a final design was decided. The Ayala’s took a lot of time to get everything just right on this car. They used a lot of techniques and styling elements, they had been using with great success on older style cars in the years before. We have not been able to find proof for actual dates when Louis car was built. But more than likely, it was around the same time when Sam Barris started to cut his own, and Jerry Quesnell’s 1949 Mercury’s. However, Louis’ Mercury is restyled much more as a complete package than the Barris cars. Almost no body panel was left alone, and the changes were not just made for the sake of change. No, they were all designed to improve the overall design of the car. And that they sure did.

The Battancourt Mercury as we know the car best, is often seen as a Barris creation. This is mostly because the second version of the car – redone by the Barris Kustom shop – is a better documented version of the car. Some publications do mention the Ayala Shop as those who have started the built. But they say it was Barris who actually finished the car.

We now know that that is not the case. The Ayala’s did finish Louis’ car most likely in early 1952. The car was never really featured in any of the magazines. But some photos of it – in this first version  –  appeared in the Dan Post Blue book of Custom Restyling (1952-53 edition), in the Trend book “restyle your car” from 1952 and in the April 1953 issue of Popular Mechanics, in the 1952 Motorama Catalog, and in a few smaller photos in a few other publications. The catalogue, the Popular Mechanics, and the Dan Post Blue book publications, all named Louis Bettancourt as the owner of the car. 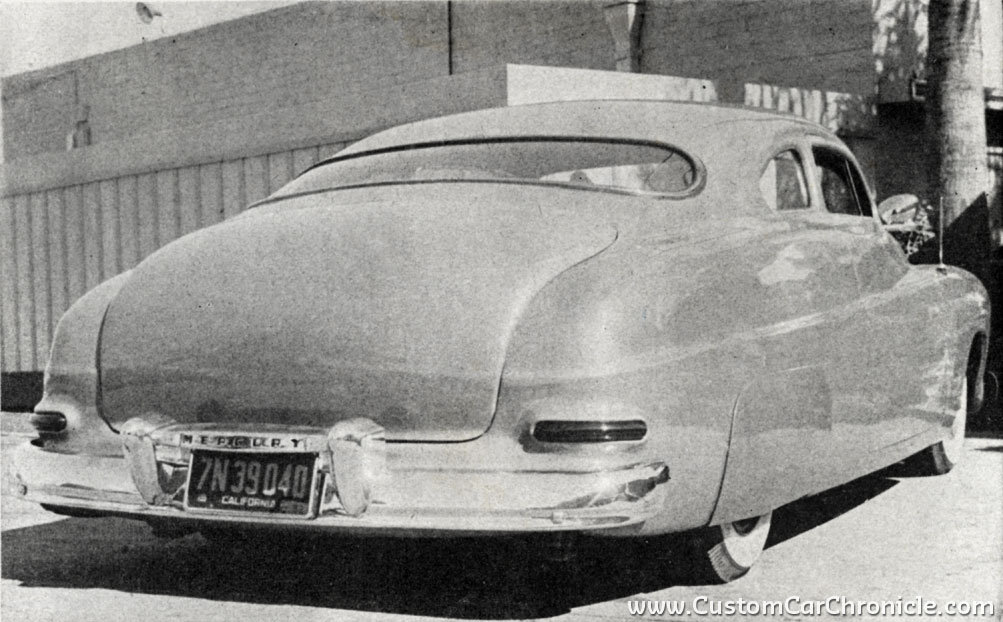 The first version of the car was an ultra clean customized 1949 Mercury. Everything on the car was molded, and where possible, all corners were rounded. Most of the trim pieces were removed, and the amount of chrome kept to a bare minimum. This last decision is something that we can see on a lot of mid 1940’s customs, done at the Ayala Shop. For instance on the Jack Stewart 1941 Ford and the Dan Landon 1949 Chevy. The Barris shop used similar techniques, but more often would use some sort of trim. The Wally Welch Mercury  was built, or at least finished, almost a year prior to Louis Mercury. And the Ayala’s finished Wally’s car with a nice amount of trim. We think that after the car was finished, Louis Bettancourt decided, his newly finished Merc might looked a bit too plain. About a year after it was finished, he already took it to the Barris shop for a redo; with some added trim pieces. But that story is for the second part of the Bettancourt Mercury article.

We feel the first version of the Bettancourt Mercury is a real statement. Made by the Ayala’s showing how well balanced and designed their creations were. And how much attention they payed to details. Even without the chrome trim, which usually helps guide the eye following the lines of a car, the Ayala’s were able to create a wonderful flowing line front to rear.

This photo is the same as the one  used in the April 1953 issue Popular Mechanics (used on the top of this article). In the particular article the photo was set free of its background, and had all the modifications specs added.
[divider]

According to the 1954 Car Craft article, the top on the Mercury was chopped three inches. But we figure the car was, at least in the rear, chopped more than that. The wonderful flow of the top suggest at least another one or more inches taken out of the back to create these lines. The drip rails were shaved naturally. Removing the drip rails was a common practice in Sunny California, in the 1940’s and 1950’s, in order to be able to create the ultra smooth chopped tops. The b-pillars were angled forward with rounded corners. A small radius at the top and a large one on the bottom. More than that, it appears that the door line is now centered in the width of the b-pillars; while on a stock Mercury the vertical section of the door post is wider than the rear window post. It must have been a lot of work to create a detail like this that might go unnoticed by most. All the window trims, except for the rear window and windshield, were removed, and the lips shaved and or leaded. 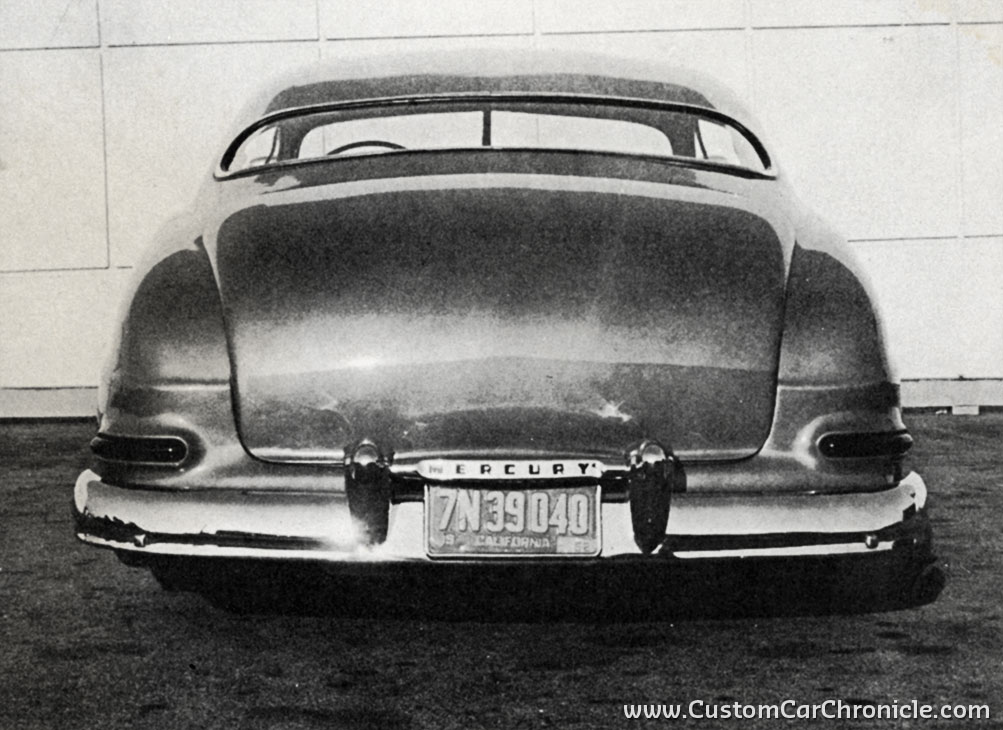 One of the most amazing features on Louis’ Merc’s are the rounded corners. While the early Barris 1949-50 Mercury’s still had most of the corners – as done by the factory –. The Ayala’s decided to radius each corner on the car were possible. Not only to change it, they wanted to use the shape of the corners to help the eye follow the new lines of the car. For instance, the way the rear corner of the hoods are cut and reshaped, make the chopped a-pillar flow much more with the hood and front fenders of the car. The top corners of the trunk help the c-pillars flow much nicer into the trunk section. And the shape of this corner also echoes the shape of the rear window. The rounded corners of the front of the hood, flow with the shape of the modeled 1951 Mercury headlights, as well as with the molded grille opening. All this was designed with a concept in mind. Not just a bunch of modifications. 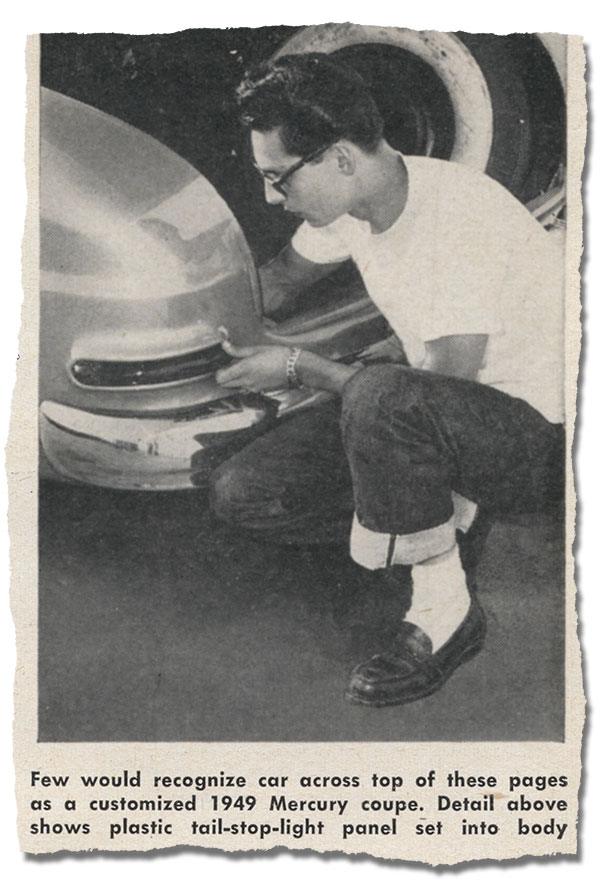 This photo shows Louis while showing the Ayala custom made taillights on his Mercury. This photo also shows that not just the corners of the trunk were “radiused”.  Also the section where the rear fenders meet the splash pan, below the trunk, had to be modified to work with the rounded corners. From the April 1953 issue of Popular Mechanics.
[divider]

The dog leg (dip) in the doors was filled-in and the whole fender-line now flows from the headlights in the front all the way to the trunk in the back in one flowing line. As mentioned before all the trim was removed from the sides of the car. This also included the belt-line trim. On a stock 1949 Mercury, this stainless trim sits in a sharp edged section of the body. After removing the trim the Ayala’s completely molded this sharp edge into a smooth flowing line. That combined with all the other body modifications created a body shape that could have been formed from warm metal.

At the front, the stock grille shell was molded to the body, and a second top portions of another 49 Mercury was cut out flipped upside down and used on the bottom of the opening. It was welded and molded to the splash-pan. And all this was done with a wonderful large radius, just like the rounded corners. Being faithful to their concept, a 1951 Kaiser grille bar was used as floating bar in the new opening. Simple and clean. 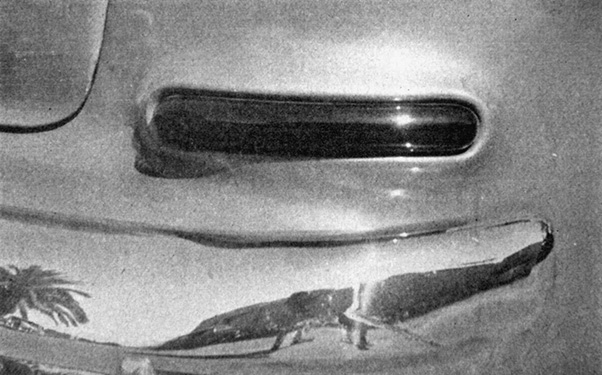 At the rear the Ayala’s created new taillight openings from round rod, shaped around the fender. These units were molded to the body with a nice lip creted from half round tubing cut and bend to fit the body. The location was lowered from stock and is now just above the bumper. Custom Lucite bubble lenses were created, and the shape of the new taillights made sure they could be seen from both the rear, as well as the side of the car. 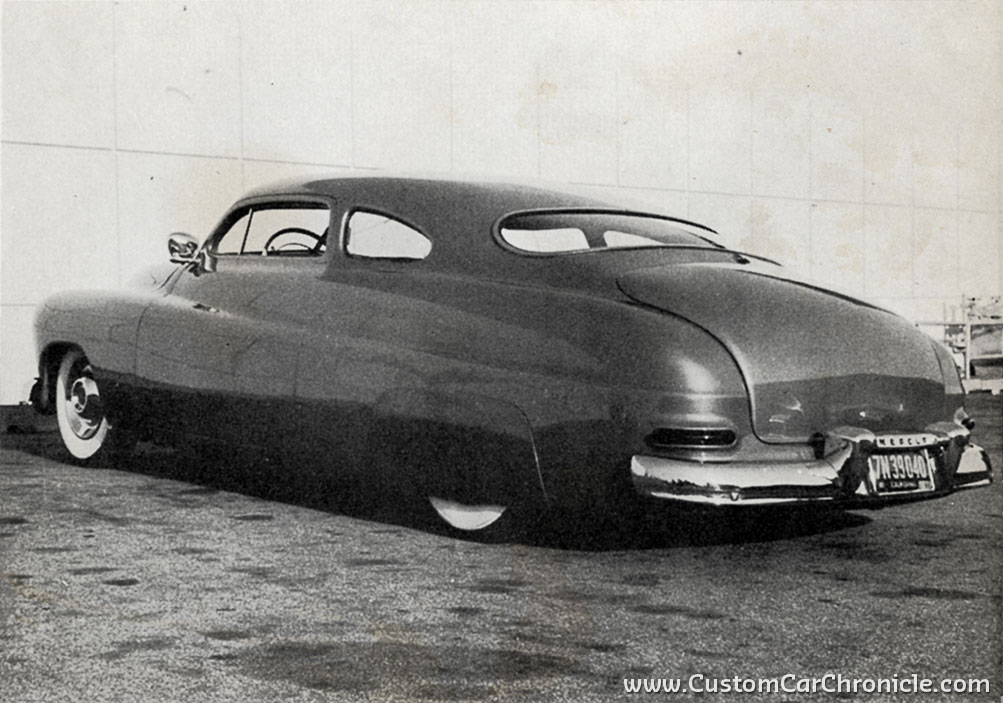 Stock 1949 Mercury fender skirts were extended down wards to sit level with the bottom of the body. Once all the body work was completed, Gil mixed up a fantastic green, gold, with lots of gold powder lacquer paint, and sprayed the whole car in this amazing color. Can you imagine how much impact a huge car painted with such a brilliant color must have had back then?

The car was finished with the stock 1949 Mercury bumpers with accessory over riders, large white wall tires with Cadillac Sombrero hubcaps. And a set of spotlights which were mounted on a rather unconventional location. For some reason, the Ayla’s decided to mount the Spotlights on the door pillar instead of the windshield pillar. This resulted in a rather unusual positioned Spotlights. 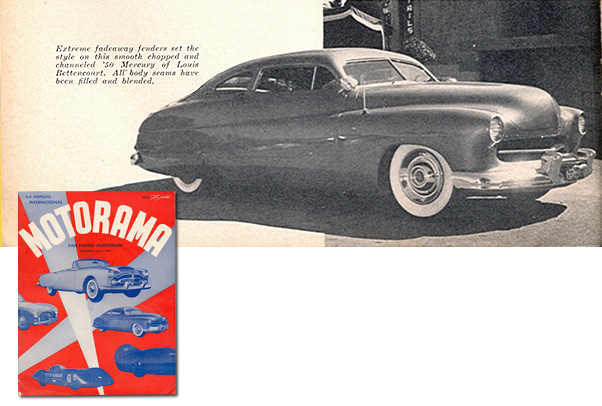 Above shows the 1952 Petersens Motorama show program with Louis Bettancourts’ Mercury on the cover, and inside as well. Although the car was shown in the program, we have so far not been able to find any photos of Louis’ car at this show.
[divider]

The interior of the Louis Bettancourt Mercury remained mostly stock for this versions. However, the dash and steering column were painted body color, and the instrument panel was send out to be chrome plated. The front seat was modified, since Louis could not fit inside his chopped Mercury anymore. The lower portion of the seat was cut down, the frame for it was also lowered, and the seat back was angled back as well. Now Louis could fit the car comfortable again. Unfortunately we have not been able to find any photos of the interior from this version. Most likely, Louis did not want to show it, since the interior was still bone stock. 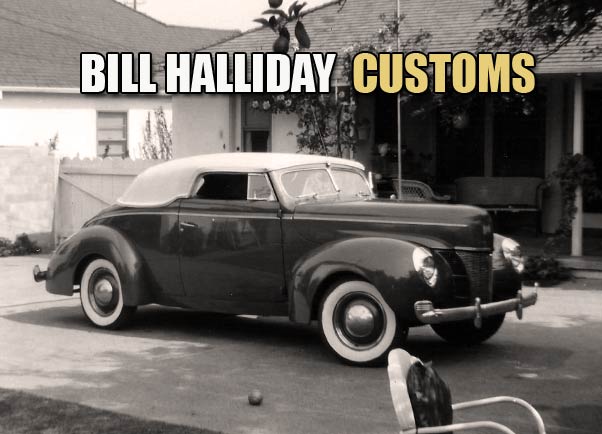 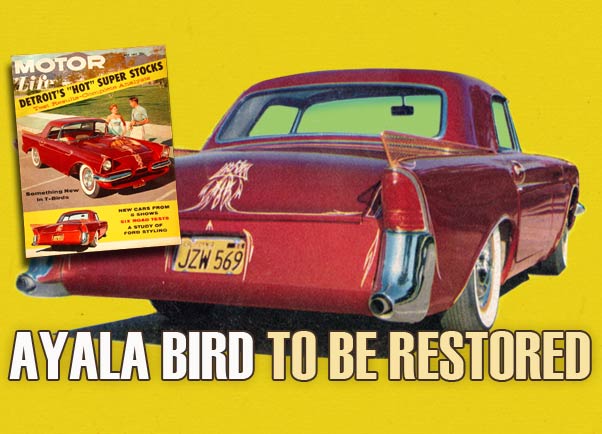 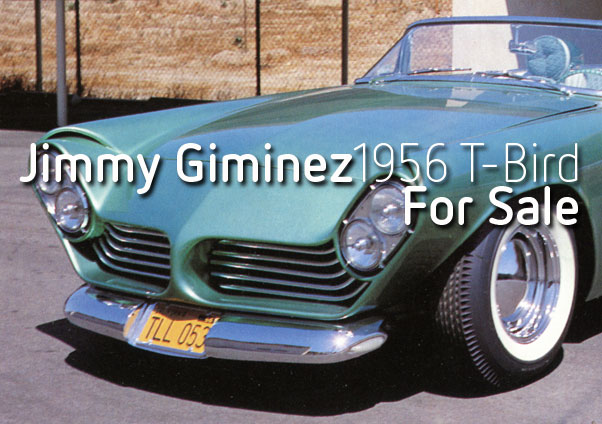