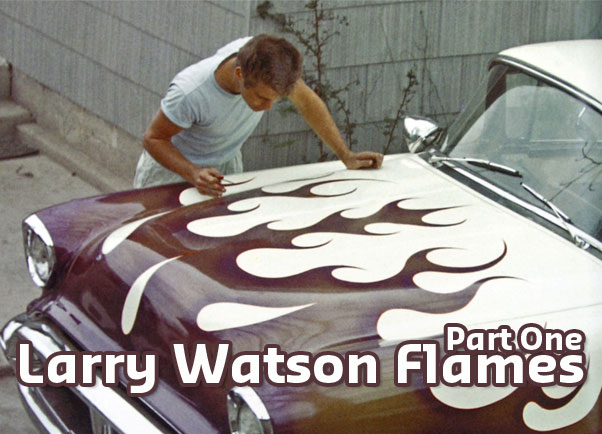 Nearly 60 years ago Larry Watson started experimenting with flames on cars. Developing his unique style of long licked flames, didn’t took him long. Today we still refer to this type as flames as the “Larry Watson Style flames”. Not bad for a then 18 year old kid.

In the 1940’s people were using flame motives to decorate their cars. Mostly their race cars. Back then flames were sometimes used on dry lake cars and Indy racers. These flames looked more like rough scallops, or stubby looking crab claw then the flames we know today. In the early to mid 1950’s people experimented with some more cleaned up flame designs on hot rods and custom cars.

Larry Watson started his custom painter career in 1956. He was around 18 years old, when he started pin striping cars in the drive way of his parents house. Soon he did his first flame paint job on a 1950 Ford sedan – owned by “Buzzy”. It was another crude flame design. Done in dark red Enamel, fading to a more orange red in the center. This type of flame was known as “crab claw” style flames.
Larry was not happy with the looks of these flames and started to experimented with some longer licked flames in late 1956. Soon he found those long licked flames much more elegant and suiting, for the style of cars he created. Larry used his new style of flames in 1957 on Al Lazarus his 1955 Chevy an Jack James’ 1957 Buick. Both cars were mostly covered in this long licked style flames.
It is rumored that the term “sea-weed” flames was started when Al Lazarus drove his 1955 Chevy, covered in long licked flames, at a local drive-in theater, which was just featuring the movie “Creature from the Black Lagoon”. Somebody in the audience shouted: “look at all that Sea Weed on that car”.

Larry’s elegant styled flames changed the looks of the Hot Rod and Custom Car scene. It were the Larry Watson designed flames that made them really popular on Hot Rods and Custom Cars. Once Larry had developed his “sea-weed” style flames, everybody who wanted a flame paint job, used his style as reference. Today people still refer to these flames as “Larry Watson style flames”.

We will devote several articles on the Larry Watson Flame painted cars, using mostly photos from the Larry Watson personal Collection, shared by the Custom Car Photo Archive. We will first show the history of his flame painting, and then get into some individual cars, up closer after that.

This first article shows only a few samples of the many flame paint jobs Larry Watson has created in the early parts of his career.

[box_light]This article shows a selection of cars that were flame painted by Larry Watson. The photos come from the Larry Watson Personal Photo Collection. More on Larry’s personal collection can be found in the Larry Watson section on the CCC-Site. Or on the Custom Car Photo Archive.[/box_light] 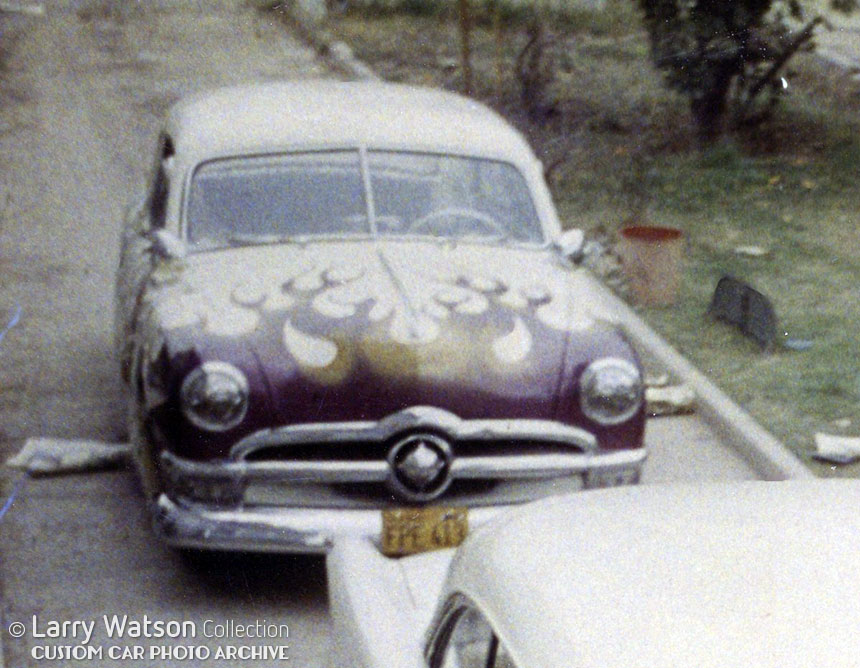 This 1950 Ford sedan – owned by “Buzzy”, was Larry’s very first flame paint job. Rather crude flame design, done in dark red wit orange Enamel, was known as “Crab Claw” style flames. Larry painted the car in the drive way of his parents house where this photo was taken. When Buss brought the car, it was already painted solid white, Larry added the flames. 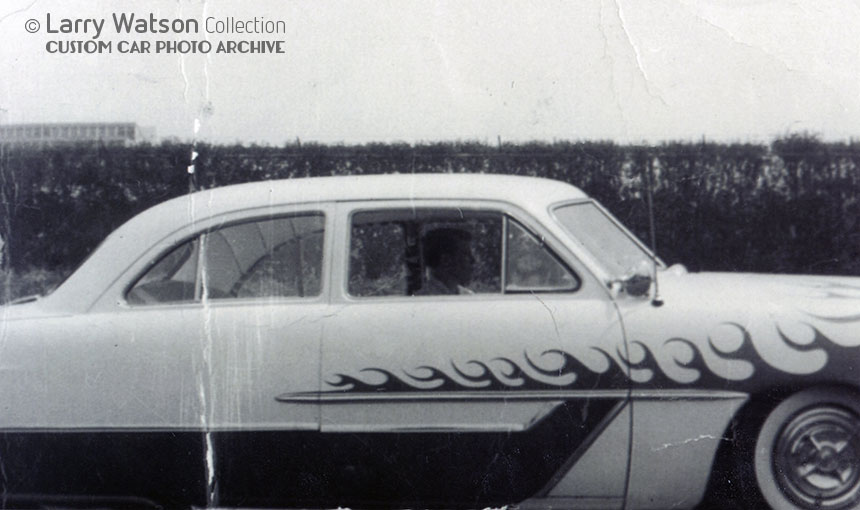 Side view of Buzz his Shoebox gives us a better look at the Crab-Claw style flames. 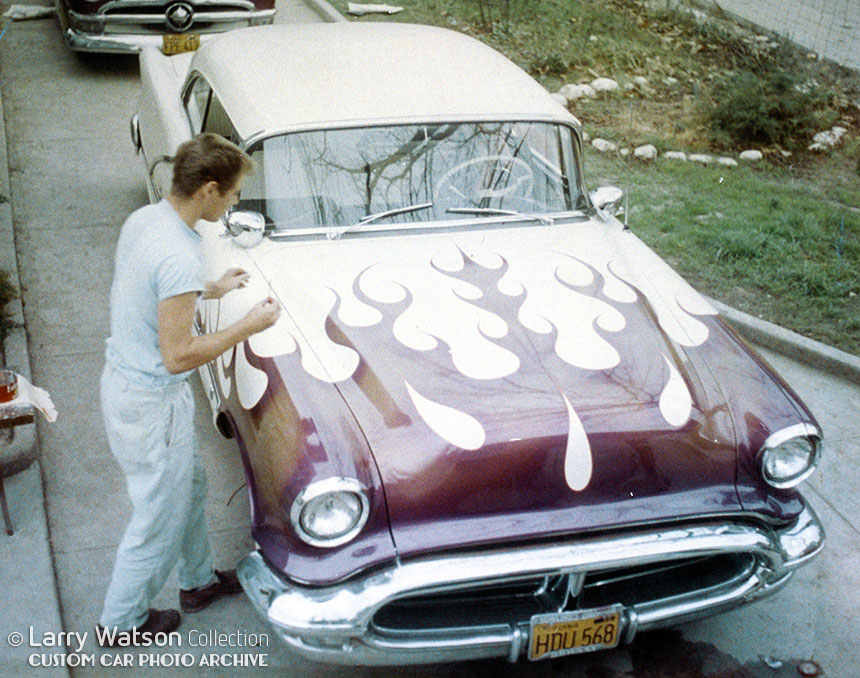 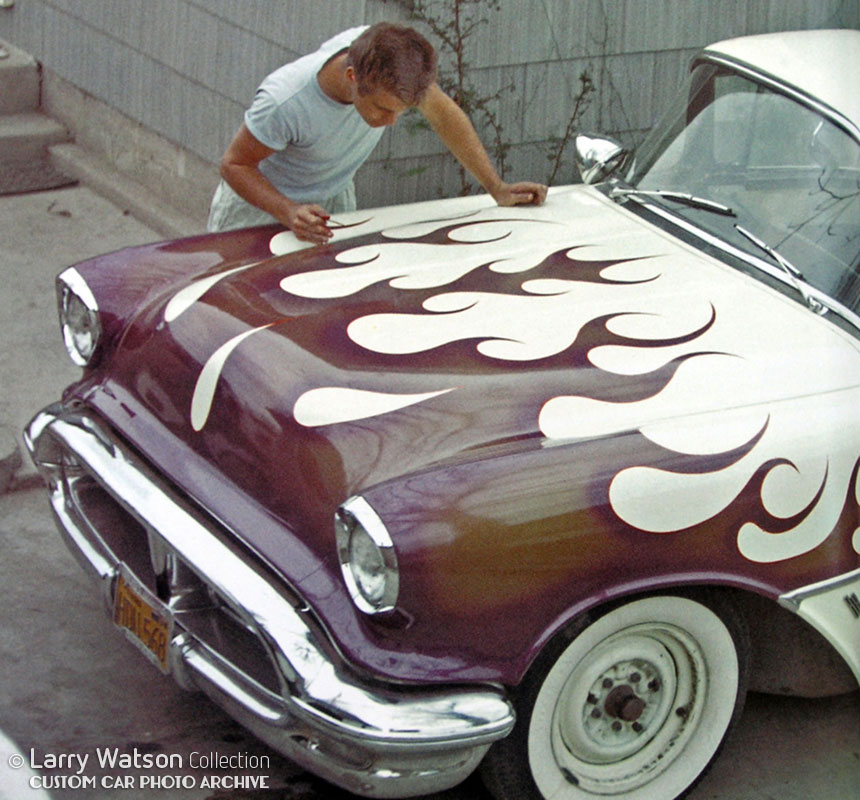 Soon after Buzz his shoebox Larry painted this 1956 Oldsmobile with similar style flames. The two photos above show Larry outlining the flames in bright red. 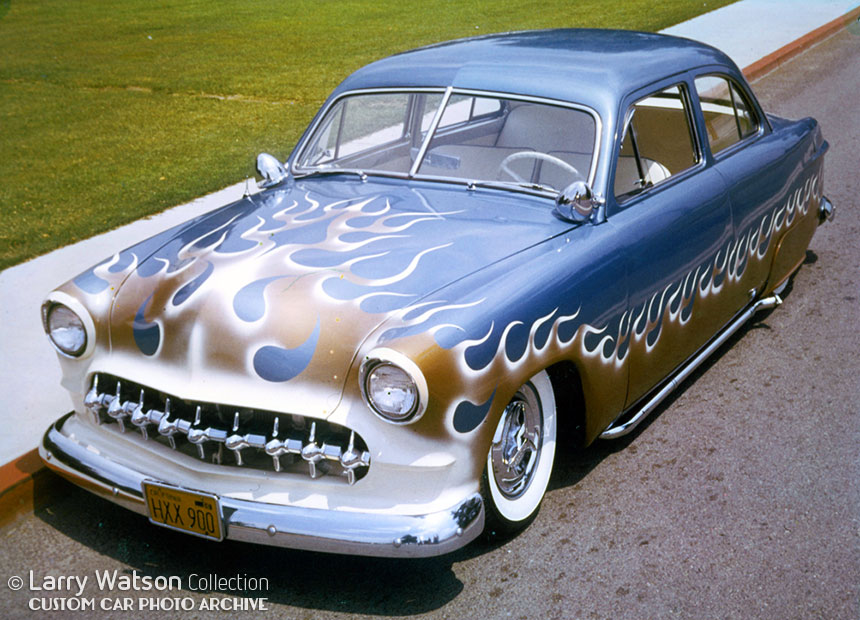 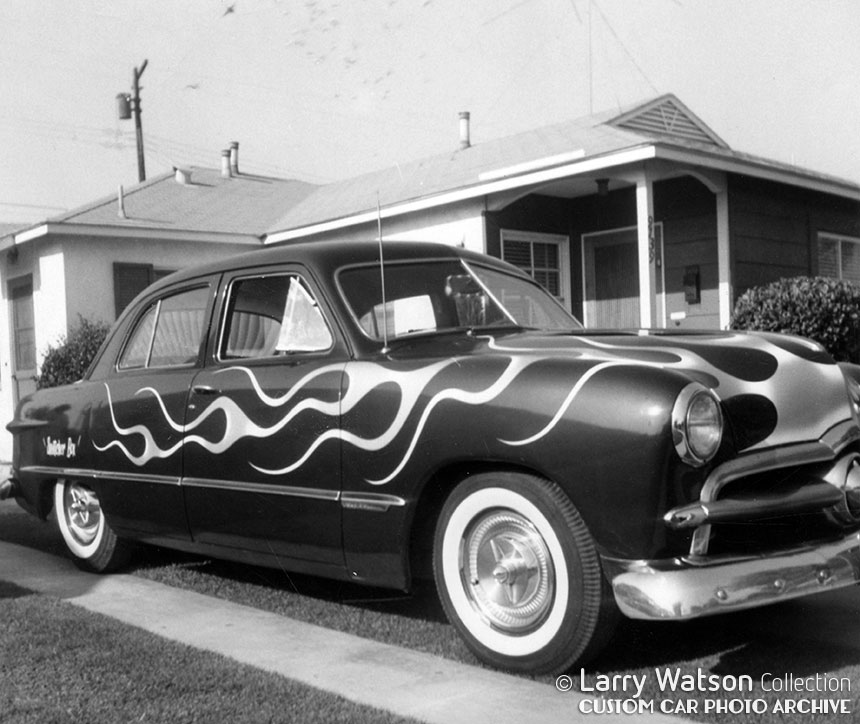 Nolan Hatcher had Larry paint some long licked flames on hood and sides his 1949 Ford four door sedan in 1958. 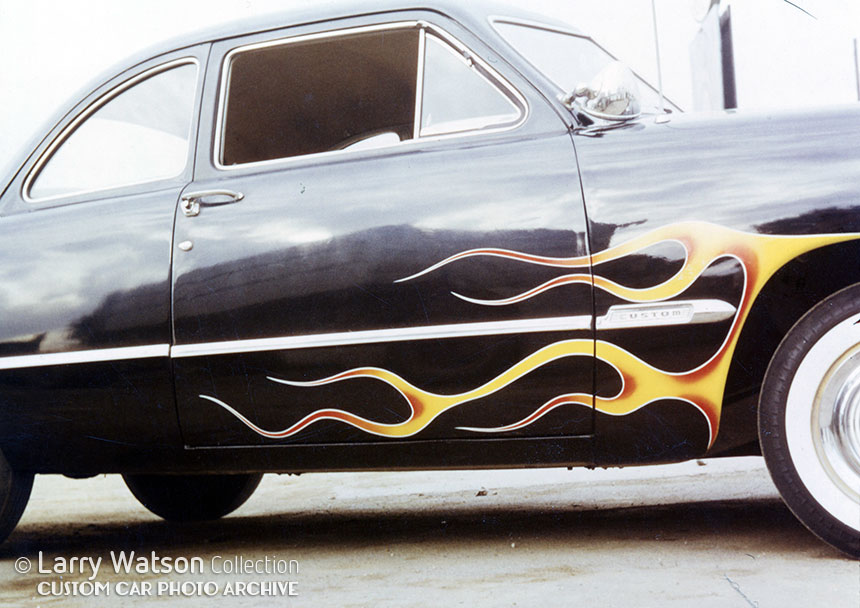 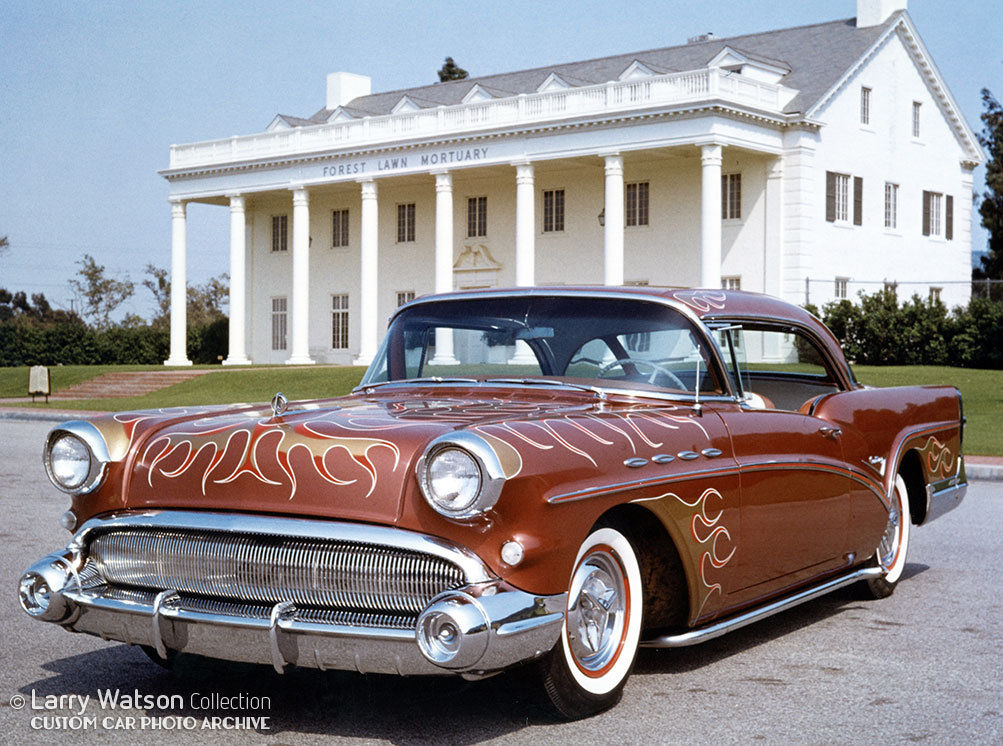 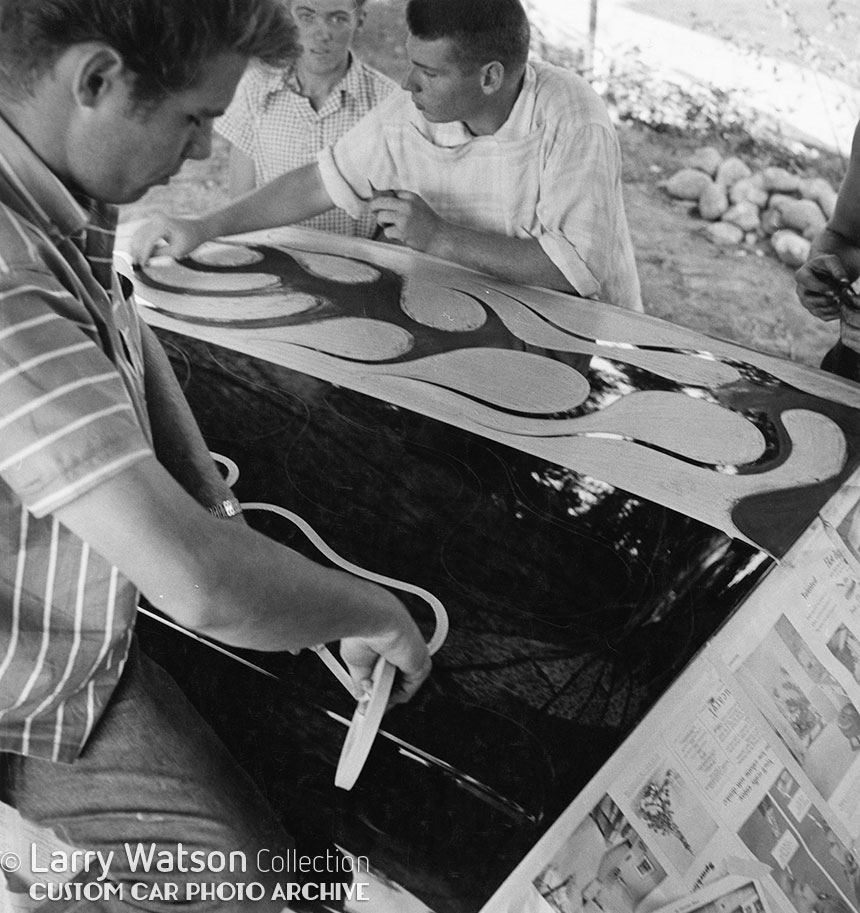 A very young Larry Watson sitting on the top of Jack James his 1957 Buick to tape of his first all covered flame job in late 1956 or early 1957, when the car was brand new. This photo shows that Larry has already finished taping the drivers side, and that he copied the flames in white pencil onto the passenger side of the top. He is now using the wide masking tape to outline the flames on this side. Next up will be taping all the not to be sections on the top… and the rest of the body.
One of Larry’s “helpers” is sanding down the fresh black paint where Larry will be painting the flames. According to the stories Larry used 20 rolls of masking tape to do the whole car. Larry painted the flames in yellow red and orange enamel. It took Larry only one day to do the complete job, and would set back Jack James $65.-. 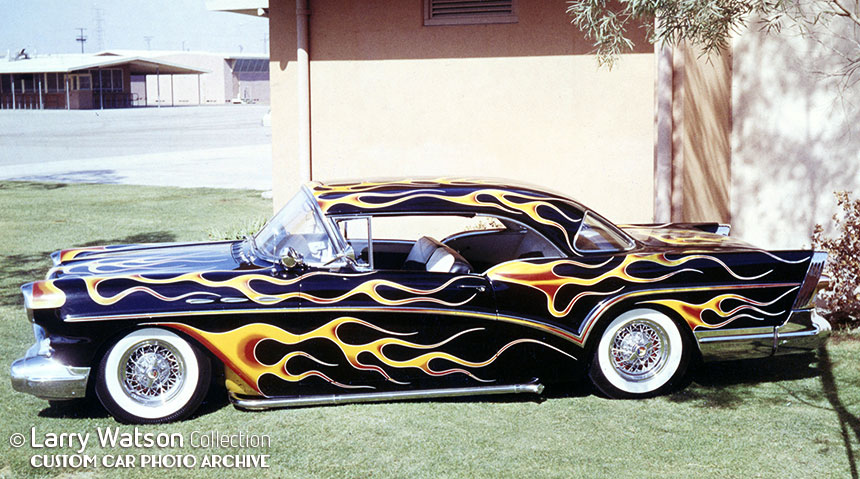 Another photo showing the finished Jack James 1957 Buick. Flames was what James ordered when he delivered the car to Larry Watson, and did he get Flames? Larry was still experimenting with the perfect shape for the flames when he took on this job, but we say he got them all right on this Buick. The car was freshly painted black, the hood and trunk had been shaved and a set of Buick Skylark wire wheels had been added when Larry got the car to do the flames. Larry added the wonderfully styled flames in yellow, orange and red enamel, and covered the whole car with it, as requested by Jack. 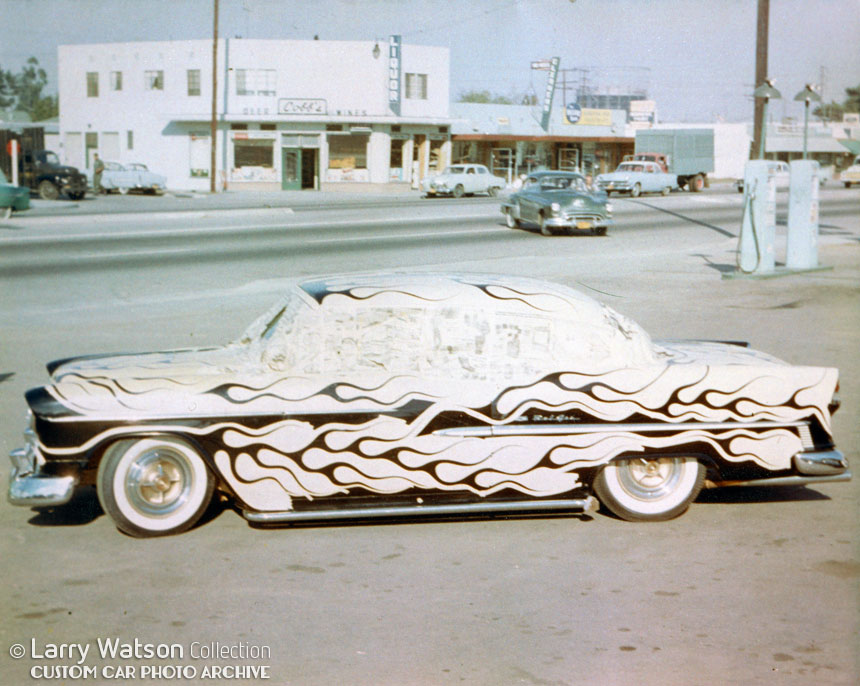 Another famous sea-weed covered custom is Al Lazarus’ 1955 Chevy. Seen here with the flames taped of at Larry’s first shop. We will be doing a complete article on Al’s car in the near future. On some of the cars Larry, or one of his friends took some nice in progress photos, and creating the flames on Al’s 1955 Chevy they took a nice series of photos showing the whole process… stay tuned. 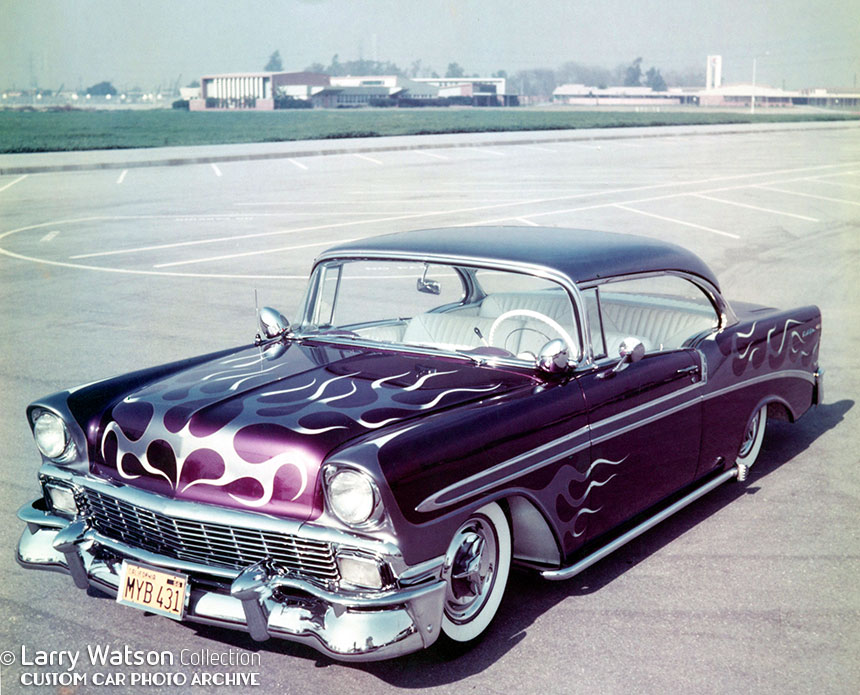 Larry painted his friend’s John Buzzman’s 1956 Chevy several times. This is the first version of “Buzzy’s” Chevy done with silver flames with white tips over a candy grape body. The flames are an interesting combination between scallops flowing over into panels and flames, all on one car. The free flouting flames on the hood give the car a less heavy look than when they would have started at the bottom of the hood. We will also devote an complete article to John’s 1956 Chevy in the near future. 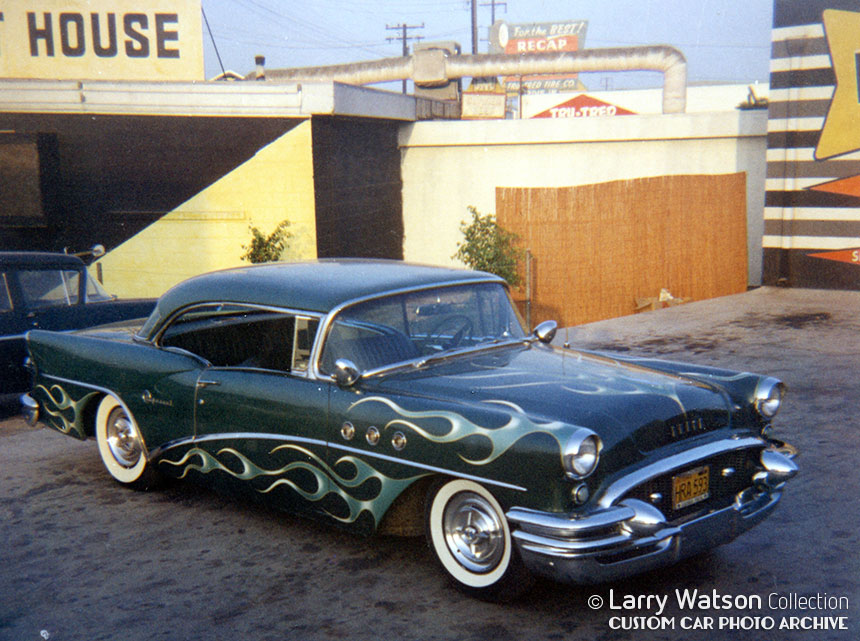 Another unidentified Larry Watson painted car is this green and flamed 1955 Buick. It looks like the body is still in its original Buick Belfast Green Poly paint, and Larry only added the flames in a light green with white faded to it.This was somewhere in 1959 when Larry had his famous shop at 9012 Rosecrans blvd. in Bellflower. The body is left stock with the addition of a set of Spotlights, a bit lowered suspension and some custom hubcaps. 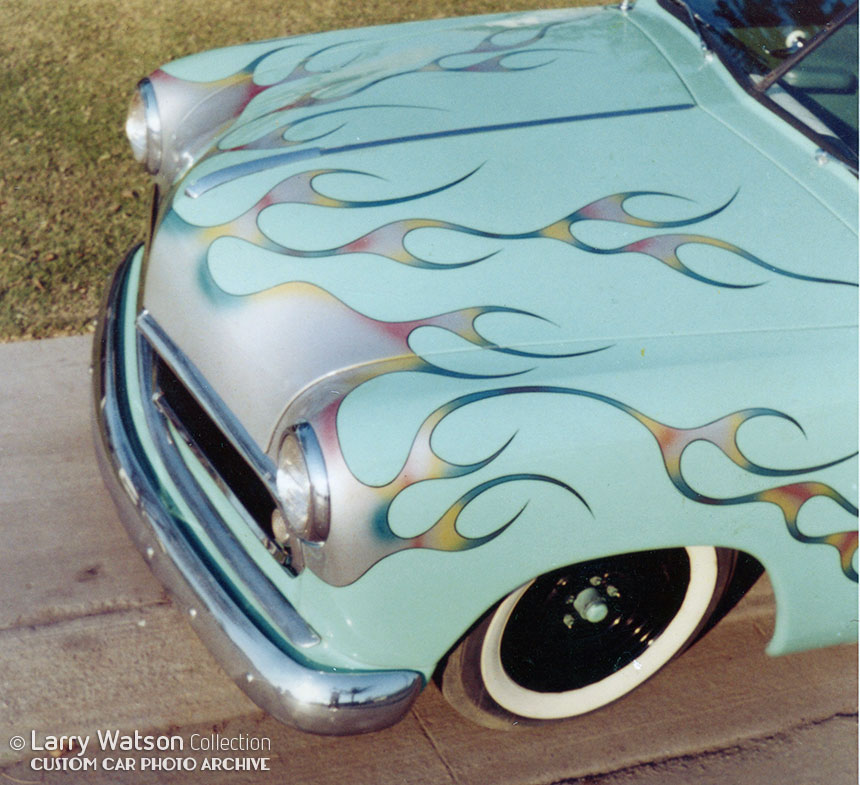 Here we can see an interesting combination of the sea-weed style, combined with crab claw flames. 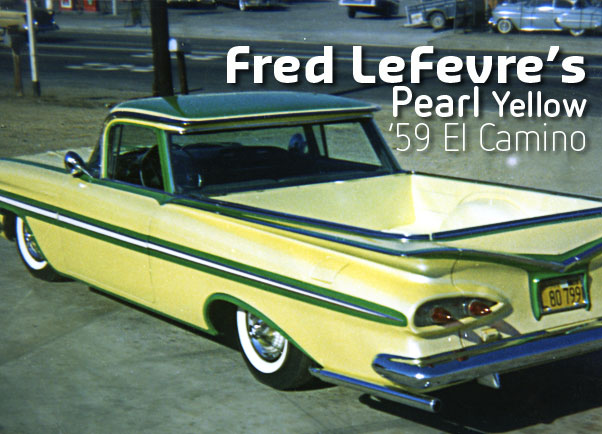 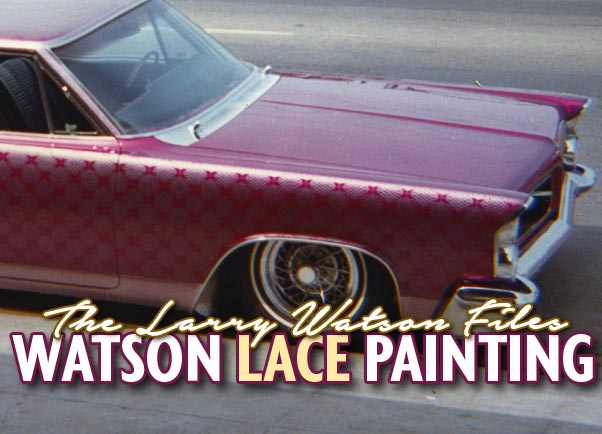 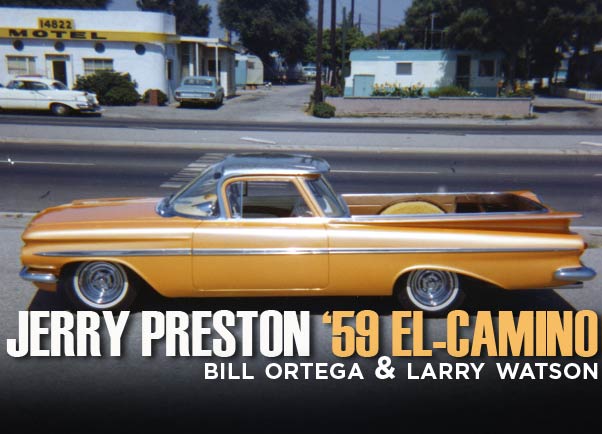