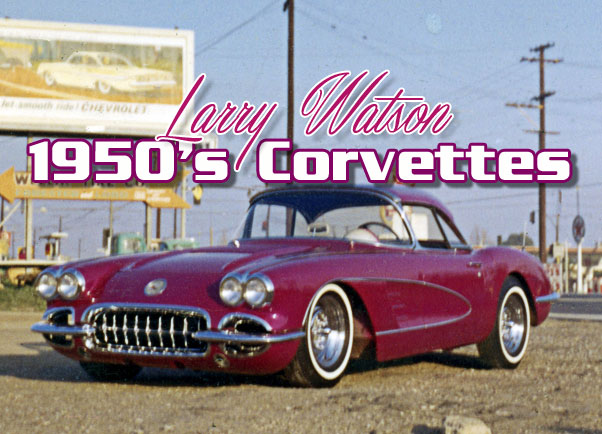 In a previous article we have showed some of the very best 1960’s Corvettes painted by Larry Watson. This article will highlight the 1950’s model Corvettes Larry Watson painted. Back in the late 1950’s and 1960’s these Corvettes were nice Sports Cars, but nothing like the collectors objects they are today. So it was really quite normal to have your Corvette customized to make it stand out from the rest. Larry Watson did a number of these first generation Corvettes and some of them are known to be some of the best work he ever did. Lets take a look at some of the Watson Fifties Corvettes.

[box_light]This article shows a selection of 1950’s Corvette Sports Cars that were painted by Larry Watson. The photos come from the Larry Watson Personal Photo Collection. More on Larry’s personal collection can be found in the Larry Watson section on the CCC-Site. Or on the Custom Car Photo Archive.[/box_light] 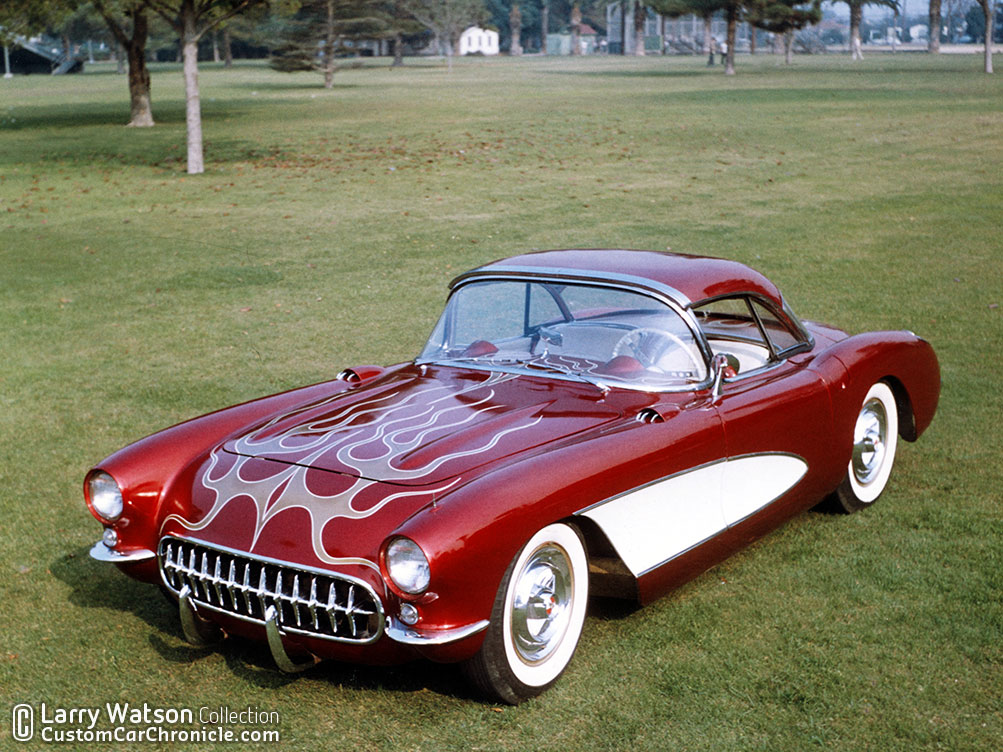 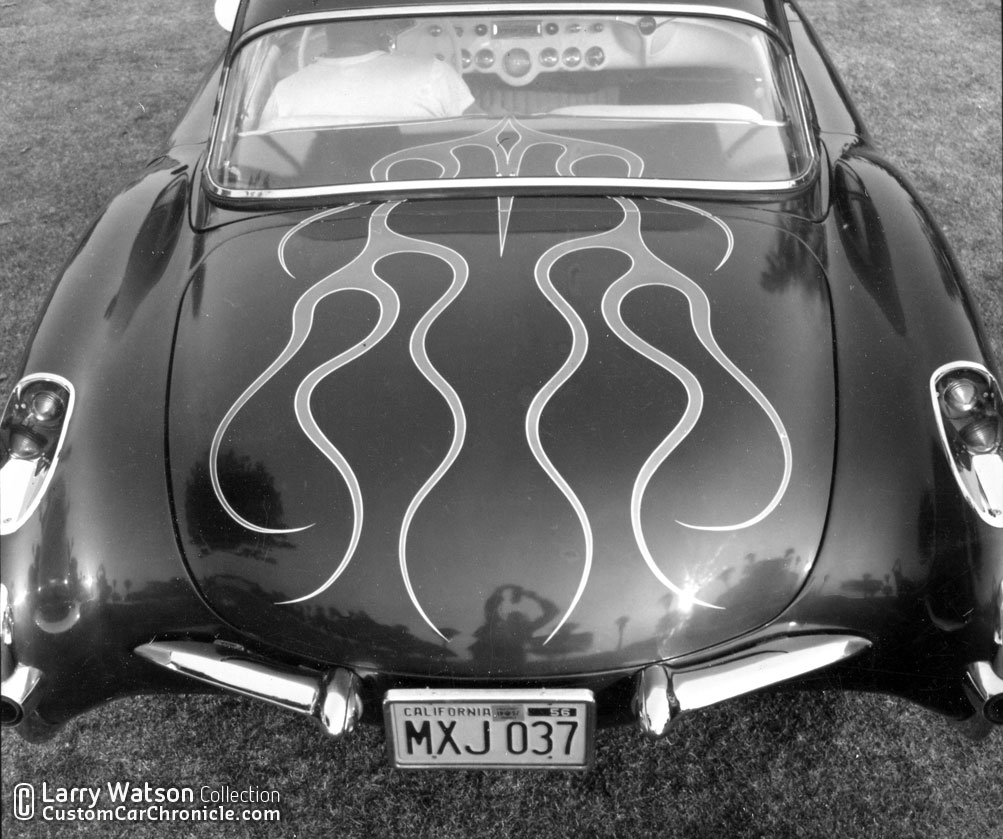 Sadly only one color photo of Darol Jorgenson was found in the Larry Watson Archives. This black and white photo shows how the thin long licked flames were added on the trunk and section behind the seats. 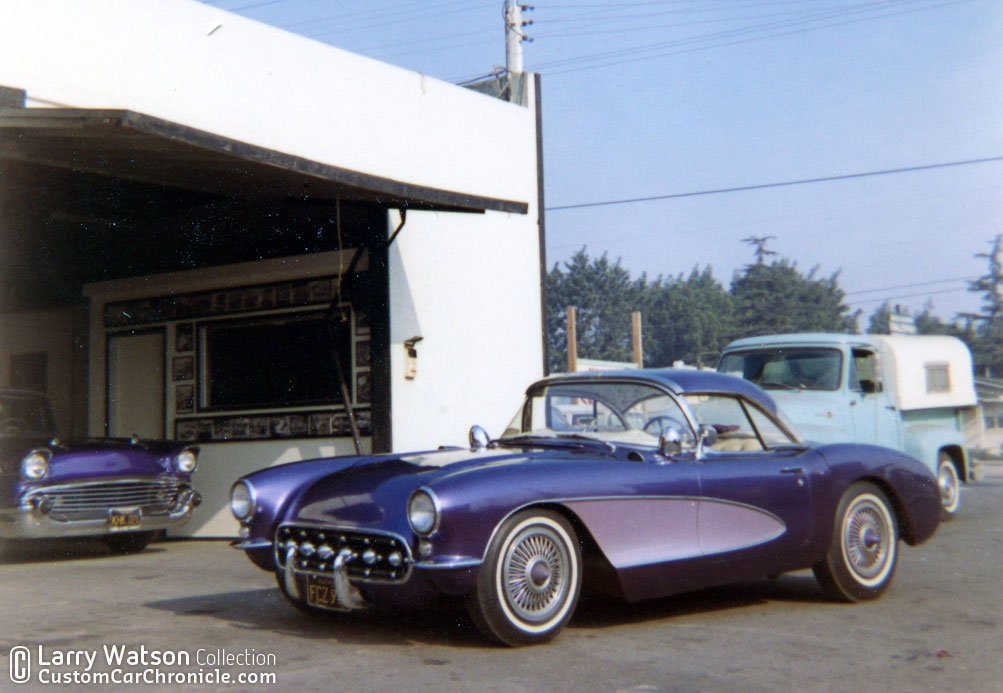 Larry painted this mildly bullet themed ’56-’57 Corvette for owner Chans, in dark  purple candy over a pearl base. The cove was done in lavender pearl. This photo and the one below were taken at Larry’s Lakewood Paramount shop. 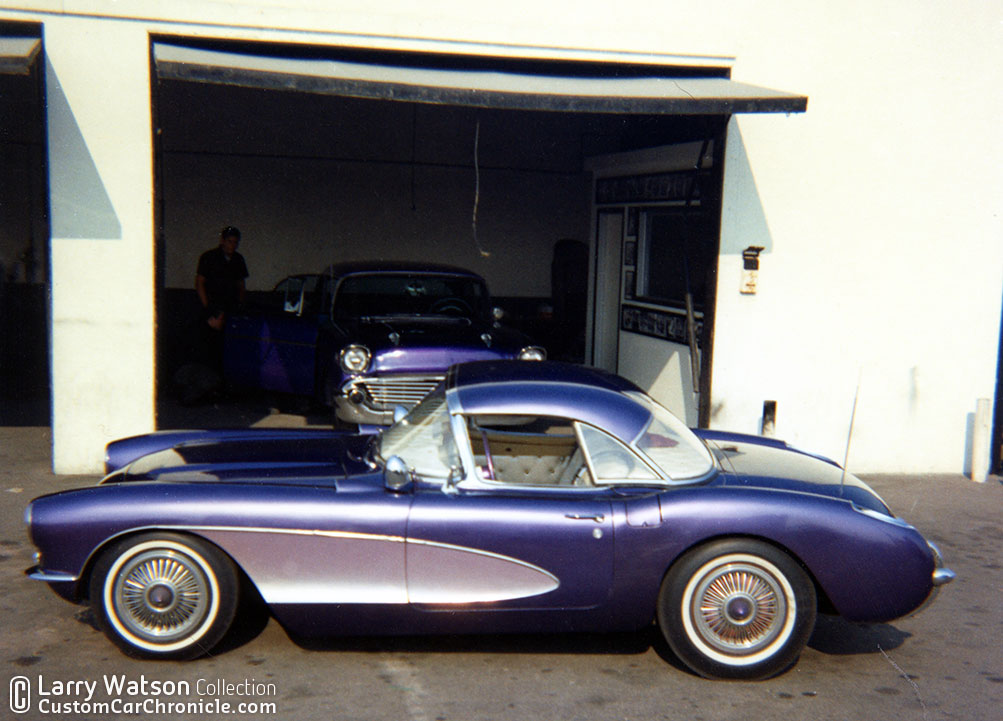 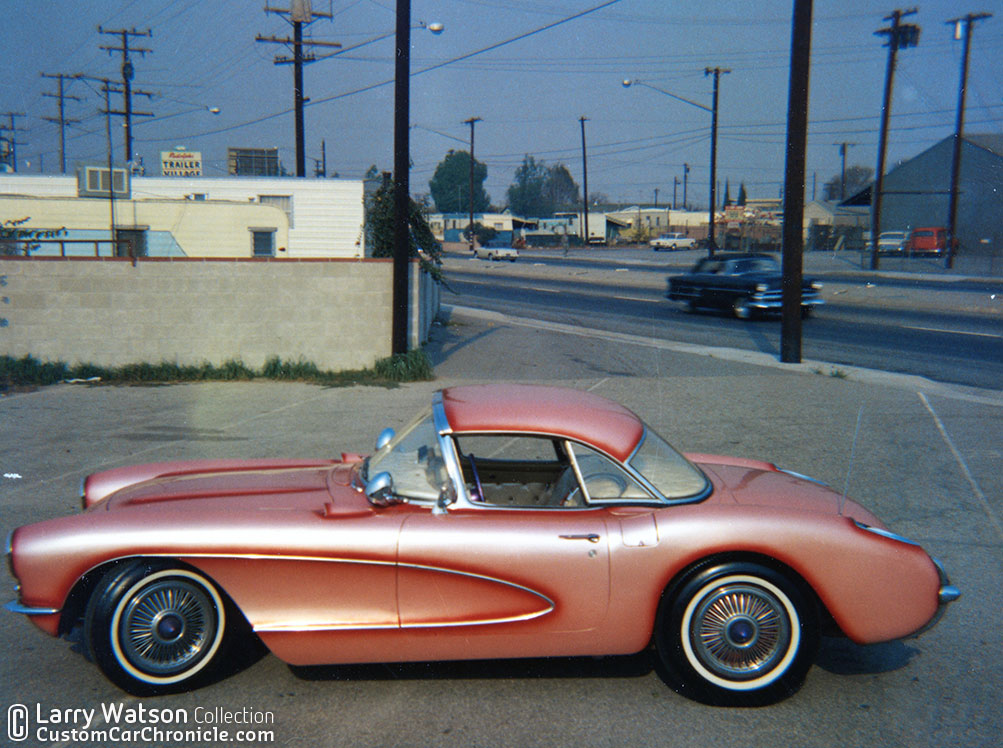 Same car as above, but now repainted by Larry in pearl salmon with candy red fades on the body lines. 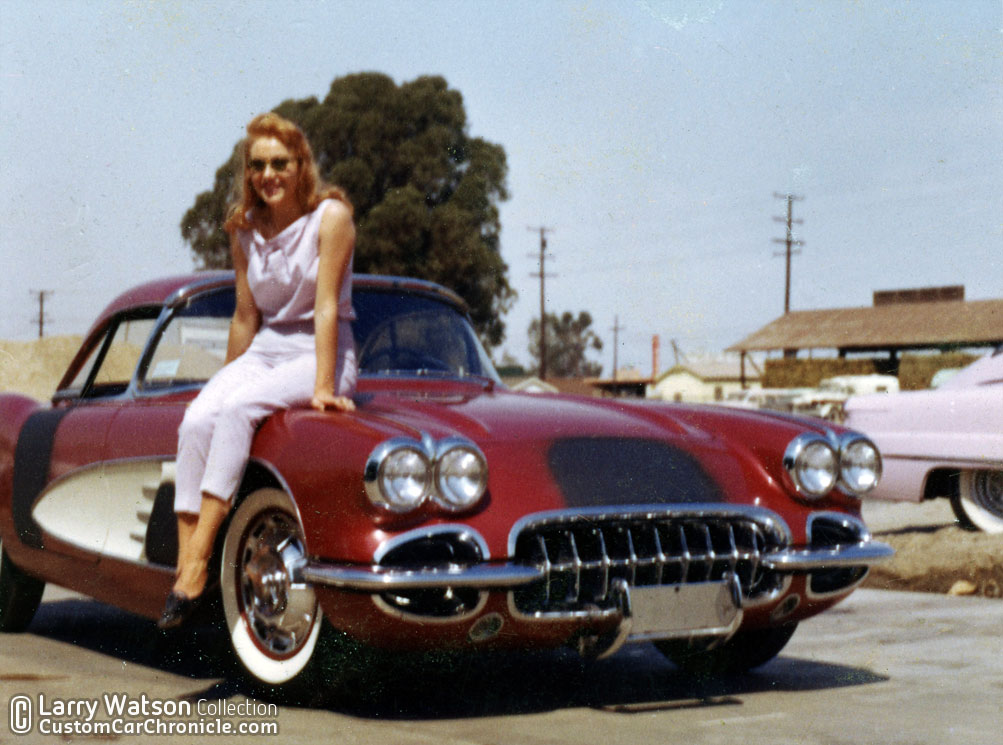 In progress ’58-’60 Corvette at Larry’s Artesia Blvd. The fresh body work was most likely done by Bill DeCarr who owned the shop on this location. The car has removed door handles and emblems. The lovely lady is most likely LaVonne Bremer. 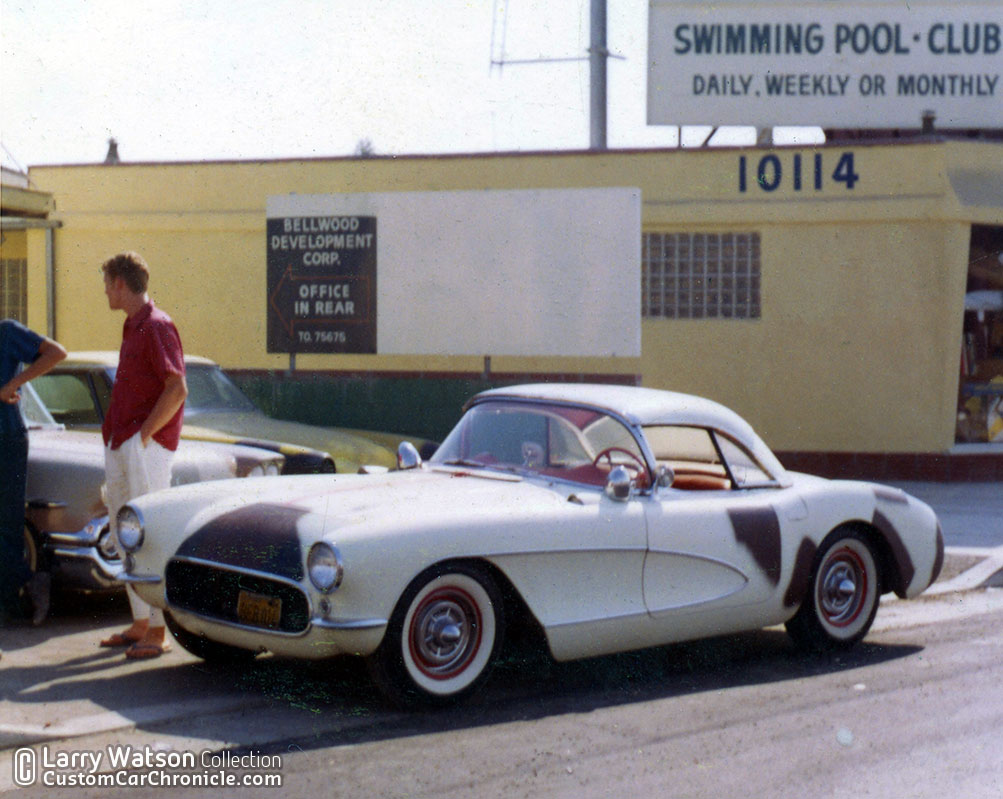 Unidentified ’56-57 Corvette with some mild body work getting ready for a Watson paint job at the Artesia Blvd. shop. The handles and emblems were removed and a set of Dummy Spotlight had already been installed. In the background we can see just a hint of Richard Gonzales candy yellow 1955 Studebaker which was in the shop for a remake by Bill DeCarr. 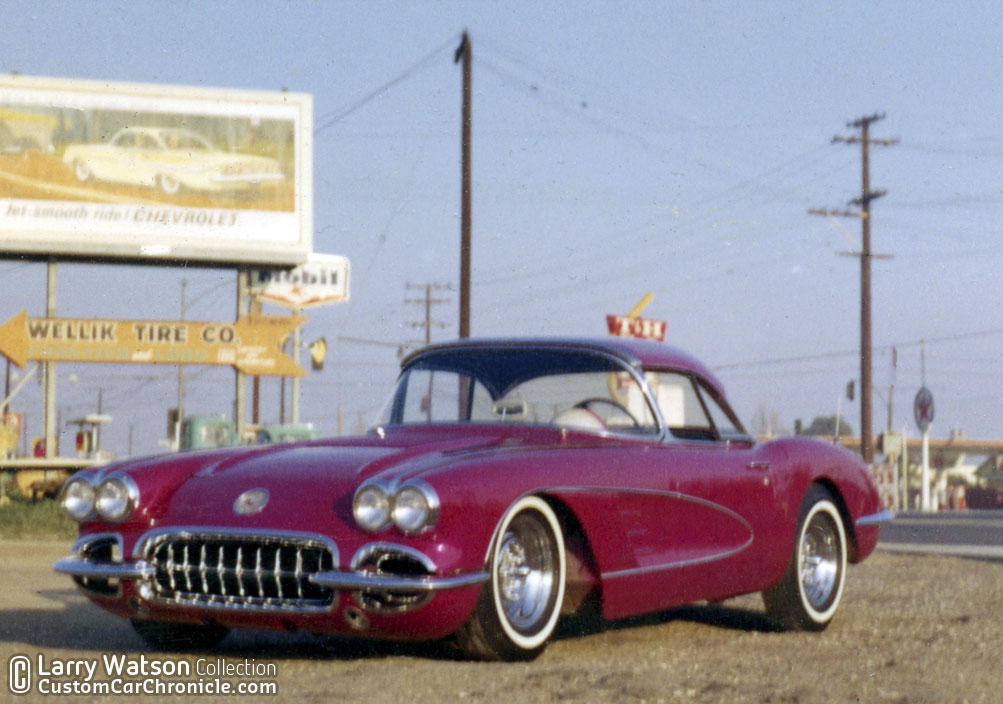 Larry painted this ’58-’60 Corvette in a wonderful candy fuchsia. The top on the car is done in silver with the same candy fuchsia fading in from the edges. It looks like the body on this Corvette is all factory stock. The only customizing is done with the chrome reverse wheels, white wall tires and the great looking California rake. The photo above and below are taken across the street from Larry’s Artesia Blvd. shop. 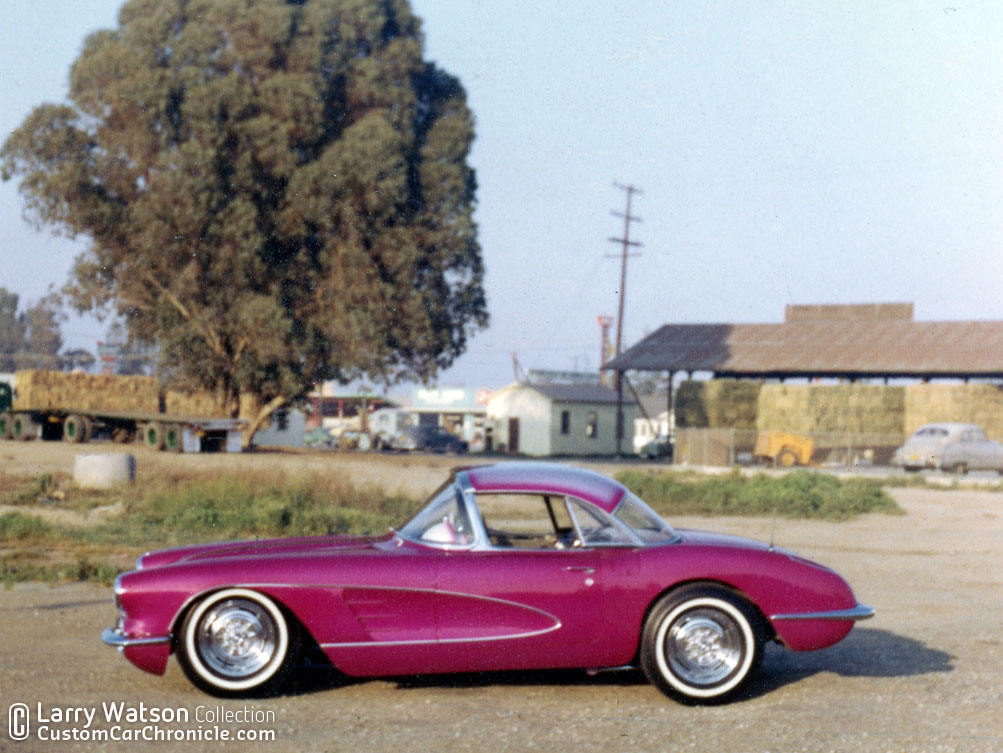 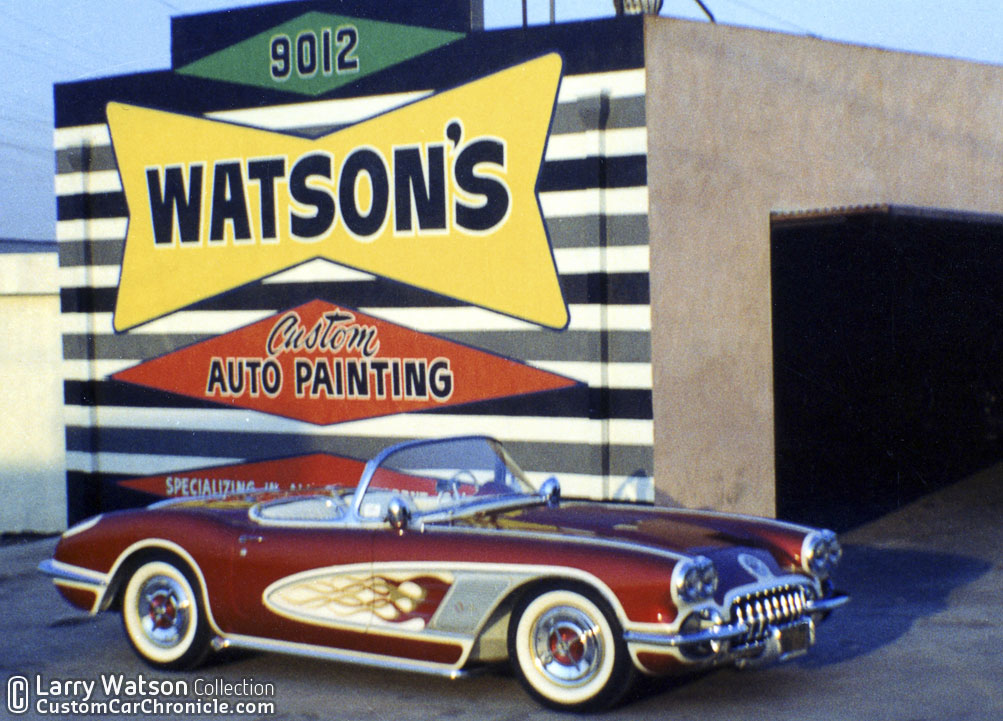 Really nice snapshot of LaVonne Bathke’s 1958 Corvette in front of Larry’s famous 9012 Rosecrans blvd. Bellflower Shop. The long shadow and soft yellow orange sunlight indicates the photo was taken at the end of the day. Larry painted this 1958 Corvette at least twice for LaVonne. This photo and the one below show the car in its first version. Larry did LaVonne’s Corvette in a candy red over white pearl. He masked off the body lines so that those would stay white. This creating the illusion of a much slimmer body. The outlines are pinstriped in gold. Larry added some really nice sea-weed type overlapping flames, in candy red and gold coming out of the front fender scoops. The four bar hubcaps on gold painted wheels, the white wall tires, the white tuck & roll interior, lake pipes and dummy spotlights are ale typical for the era this car was built.
One of the best Corvettes Larry ever did. 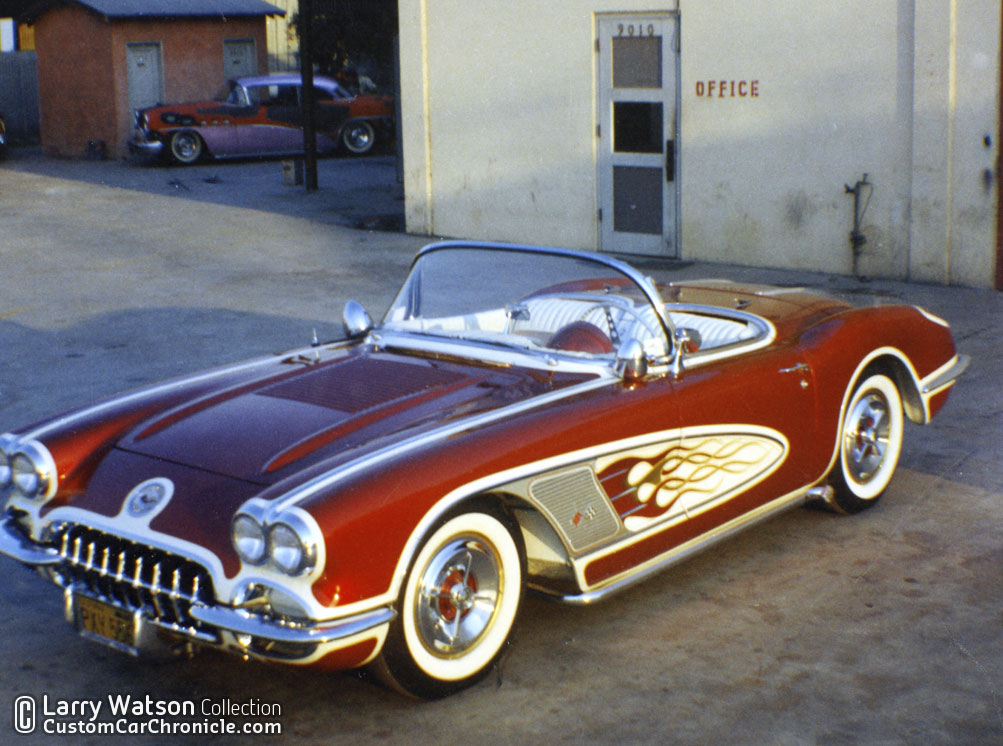 A photo of the later version of LaVonne’s Corvette can be seen here in the article we did on Larry Watsons flame painting. 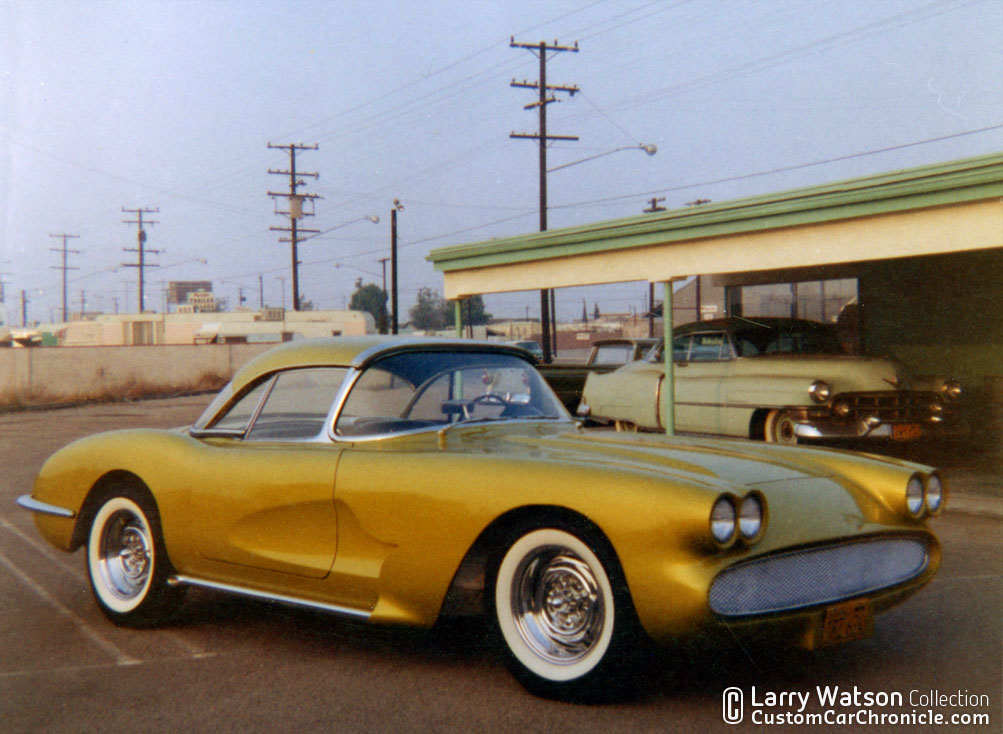 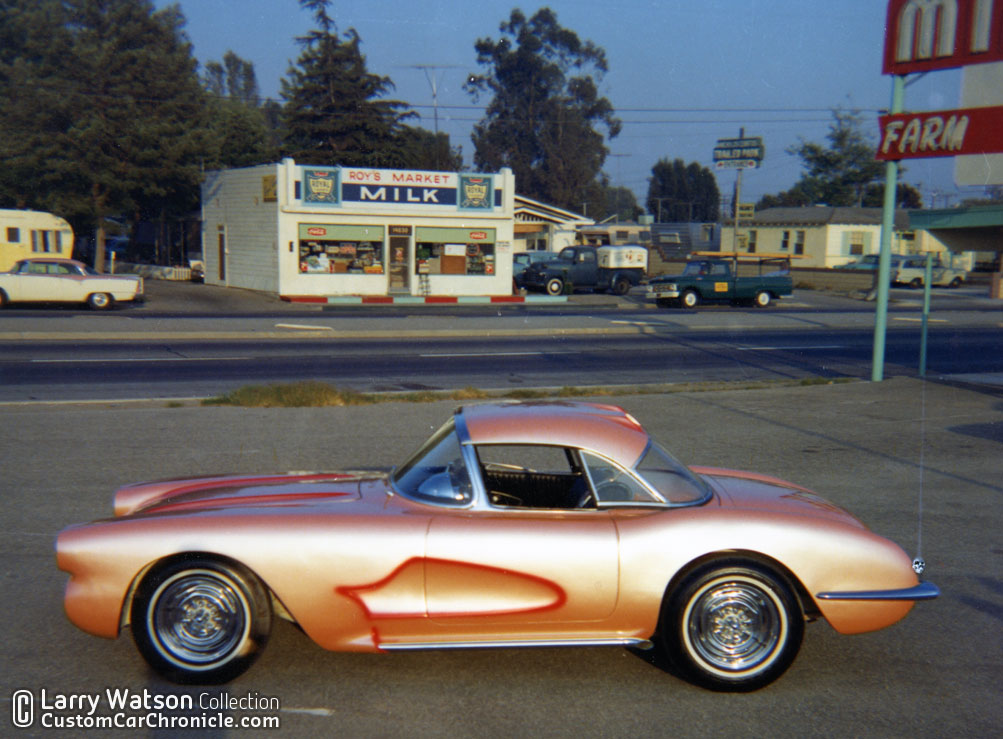 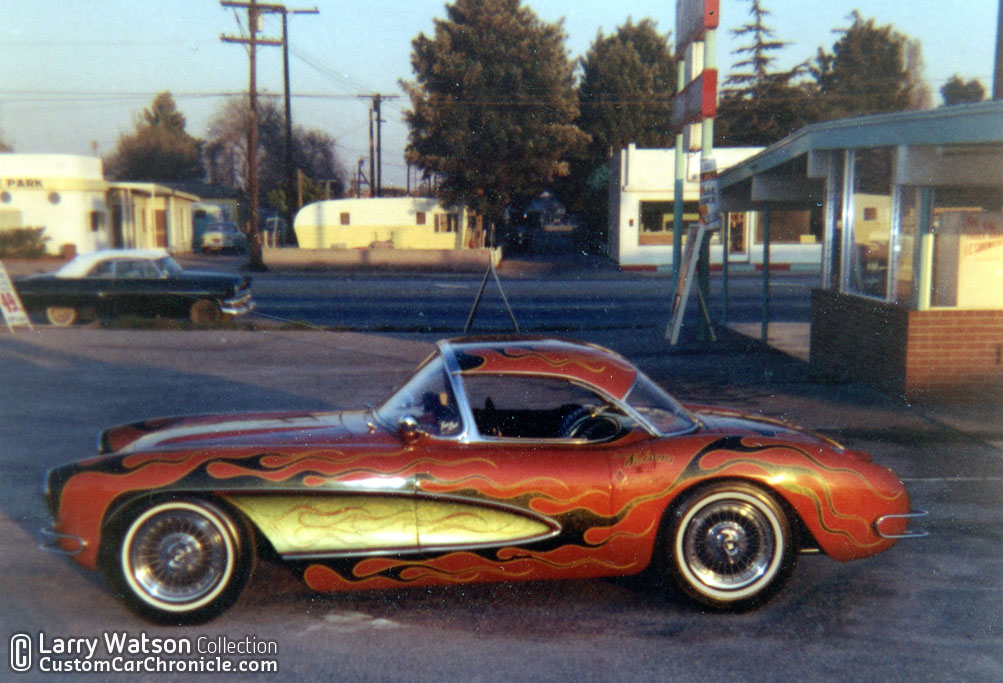 Pinky Richard’s 1957 Corvette was customized by Bill Hines. Larry added heavy pinstriped in yellow and red black metal flake sea-weed flames to cover the complete body. The flames in the cove were done by Larry on an earlyer version. Those were the inspiration for the rest of the custom paint work. We will show you a step by step, on the flame job on this Corvette at a later date. Stay tuned. 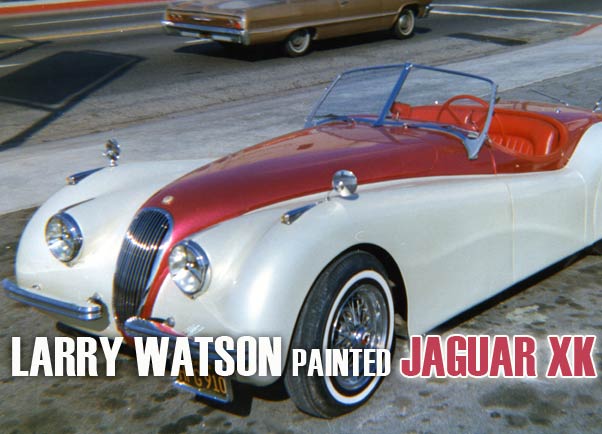 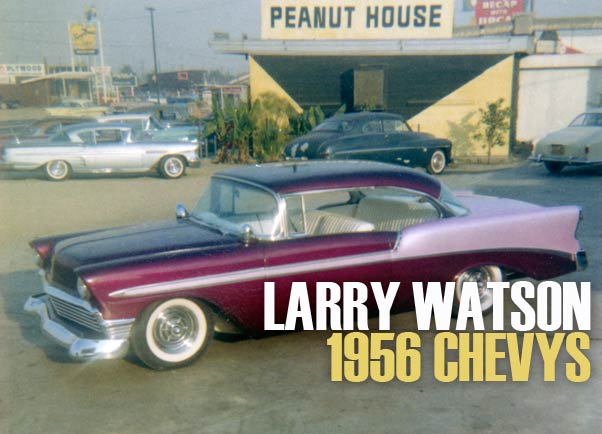 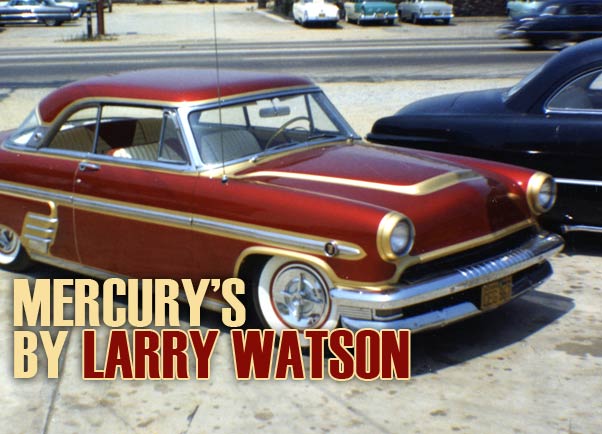