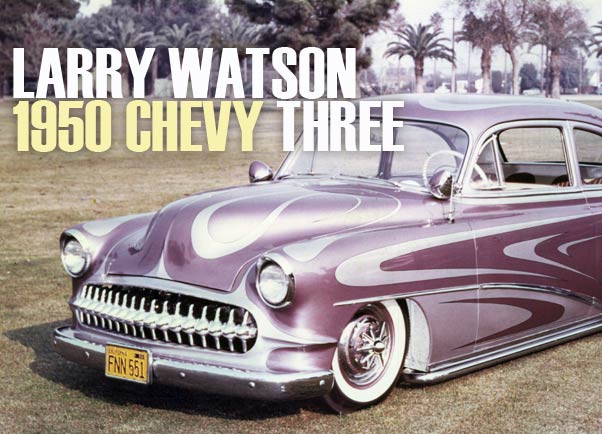 In 1957 Larry Watson changed the looks of his personal 1950 Chevy sedan for the third and last time. Metallic Rosemist with silver scallops outlined in Black, Larry’s first ever full car paintjob.

[box_light]This article shows a selection of photos of Larry Watson’s 1950 Chevy’s. All these photos come from the Larry Watson Personal Photo Collection. More on Larry’s personal collection can be found in the Larry Watson section on the CCC-Site. Or on the Custom Car Photo Archive.[/box_light]

[dropcap]L[/dropcap]arry Watson took his 1950 Chevy Grapevine in its second purple and Rosemist version to Concours D’Elegance in Palm Springs. When Larry returned home on Sunday after the show he was surprised by a really bad sand storm. The sand storm would strip of the paint on the front of the car and damage the windshield… perfect reason for yet another update.

The next Monday Larry took his car once again to the Jay Johnston shop to fix the damage to his Chevy. A new Olds windshield was ordered and Larry and his friend Gary McNaught sanded the body to perfection, removed all the grease and did all the prep work so that Jay’s paint man could paint the car once more in Rosemist metallic paint. The next day the car was not yet painted, so larry went into the paint booth and would do his first ever complete car paint job. A metallic Rosemist nitro lacquer on his own 1950 Chevy. It turned out that the paint-booth fans were not turned on when Larry started his paint-job, so the nitro fumes were not blown out of the booth. After spraying no less than 5 gallons of the paint Larry could barely walk out of the booth. Completely stoned from the fumes. Gary took Larry home, to his parents house where he crashed in bed. Larry’s mother thought he was drunk, and did not talk to gary for some time until she found out what had happened. 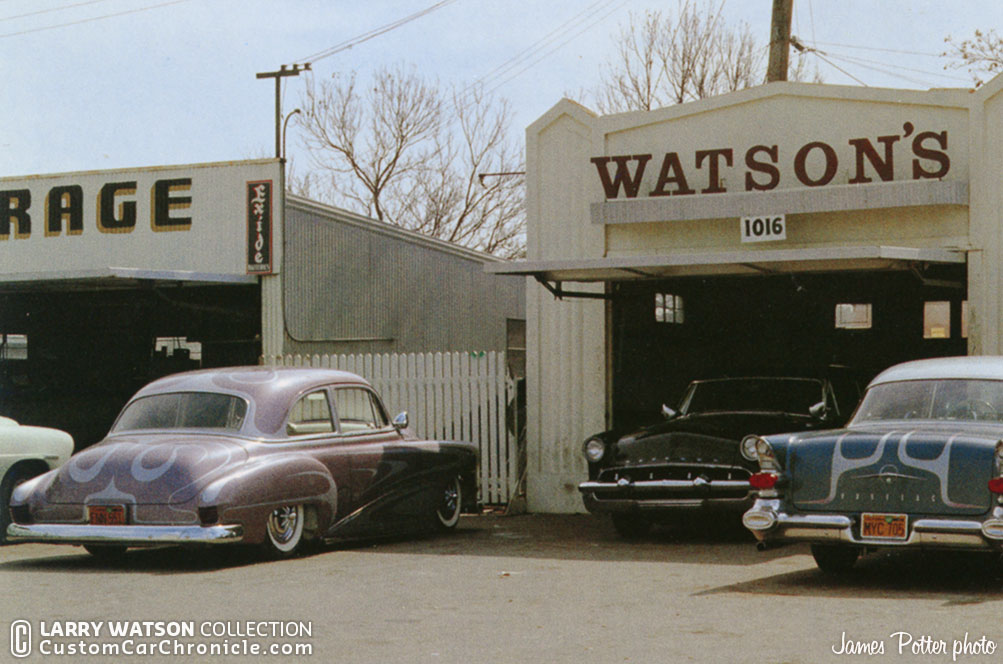 Larry’s ’50 Chevy in its last version parked to Larry’s first shop at 1016 Artesia Blvd., in North Long Beach. By the looks of the trees it was winter 1957 when this photo was taken.
[divider] 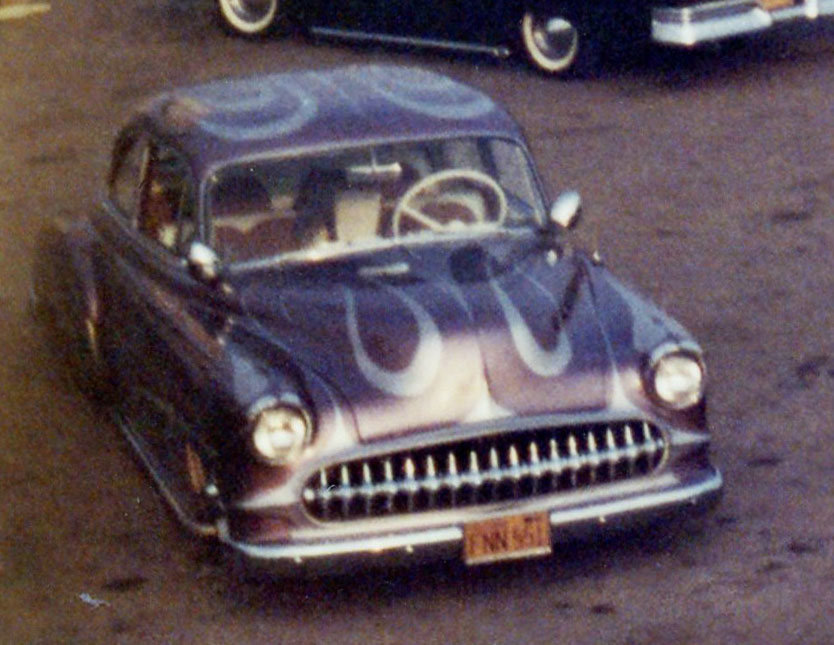 This photo was taken in the parking lot in front of Larry’s first shop.  It was September 1957, and Larry and a few of his friends were preparing customer cars for a big show at Hollywood Park.
[divider] 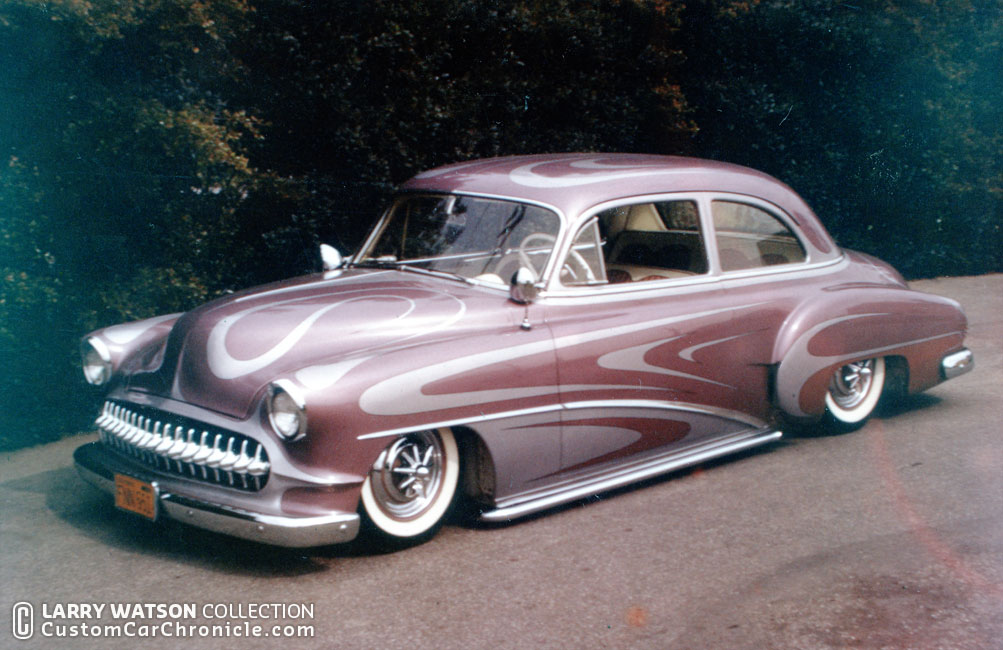 This photo shows the nice motion of the curly scallops. It also shows that it was a good decision of Larry to not use the skirts on this version.
[divider] 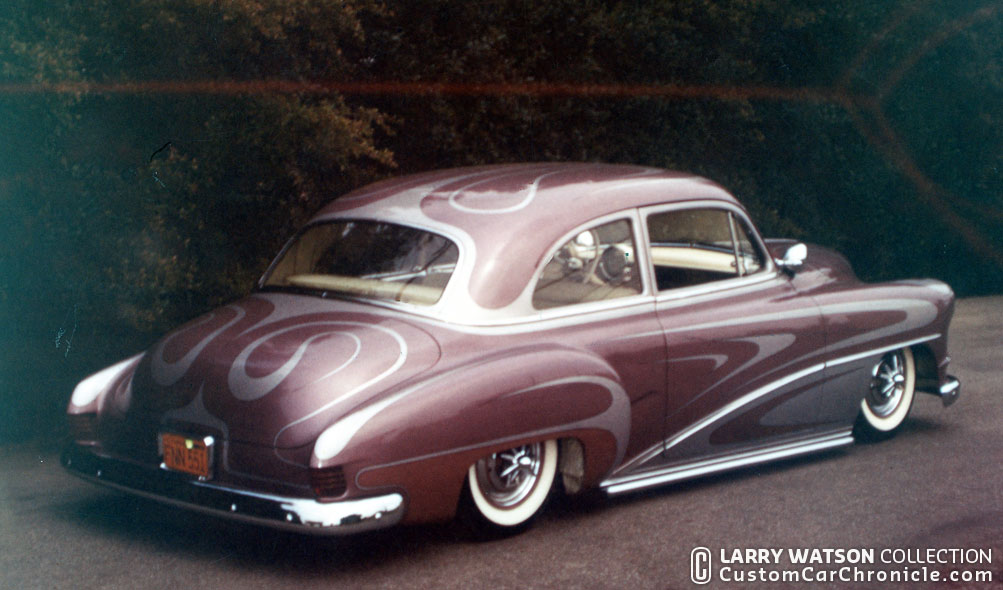 After the paint had dried Larry and his friend color sanded the fresh paint and then took it to have it professionally rubbed out. The new paint looked stunning, but Larry had something new in mind for the car… curly scallops. In his parents garage Larry would lay down the tape for the scallops until he was happy with the design. First on one side, then he copied the exact design to the other side. While Larry was taping the other side of the car. Gary was carefully sanding the Rosemist paint where the scallops would be in the taped of sections. Once the scallops were all taped and the rest of the car covered with newspapers, Larry sprayed the scallops in a fine silver metallic followed with a few coats of clear lacquer. After he removed the tape the scallops were carefully sanded and rubbed out. Then Larry striped the wonderful shaped scallops in black. Once again his 1950 Chevy had a completely new look, and Larry was almost ready for cruising again. It was 1957 and most customs were dressed up with dummy spotlights. So Larry got a set and added them to his Chevy, he also added some more teeth to the hubcaps and decided to not run the fender skirts on this version. He had painted them with the Rosemist metallic, but after the scallops were added to the car Larry felt the skirts did not fit the style any more. 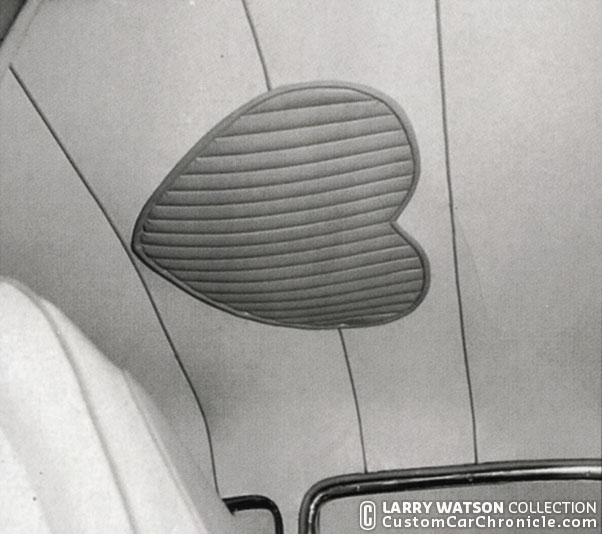 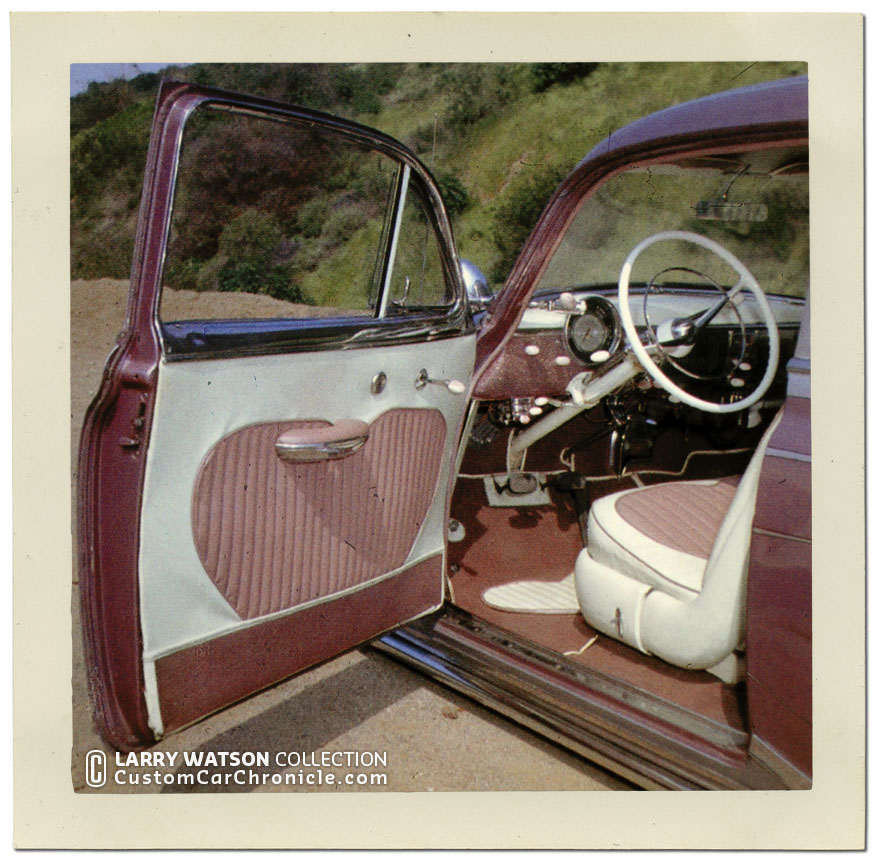 More heart shaped upholstery on the doors and seats. The interior was not changed for this last version of the Chevy.
[divider] 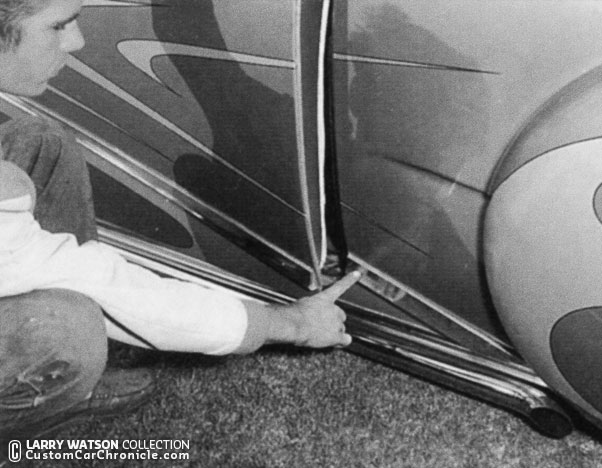 Larry demonstrated the push button hidden behind the hinged and spring loaded lower section of the Buick side trim. Pushing it opened the doors.
[divider]


Larry’s good friend Lowell Helms took a lot of photos for Larry. One of Larry’s favorites were the night photo shoots. Together they went on many of these to capture Larry’s personal cars as well as some of his customer cars. Larry just loeved how the lights reflected the paint during the night. Below are a few samples of one of these night shoots with Larry’s 1950 Chevy. 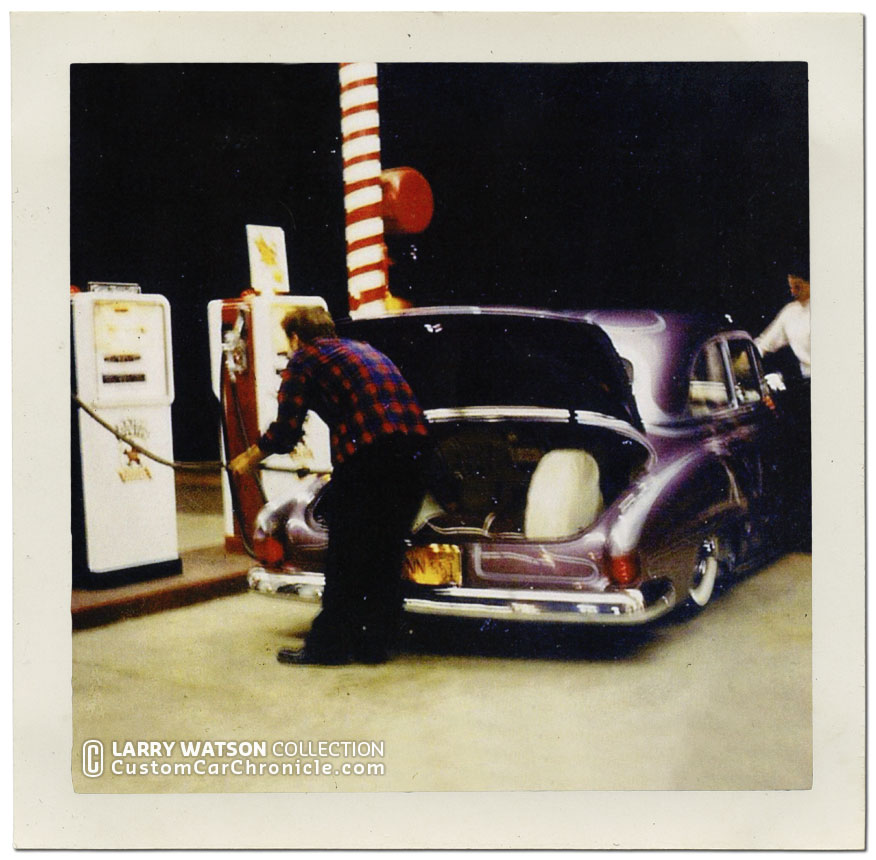 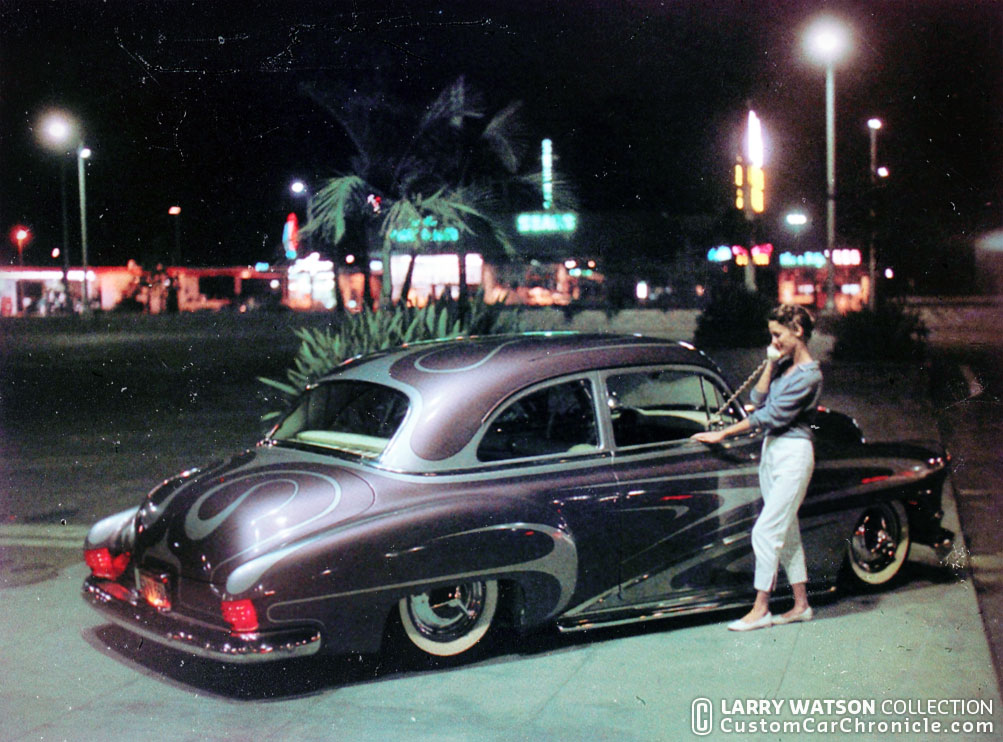 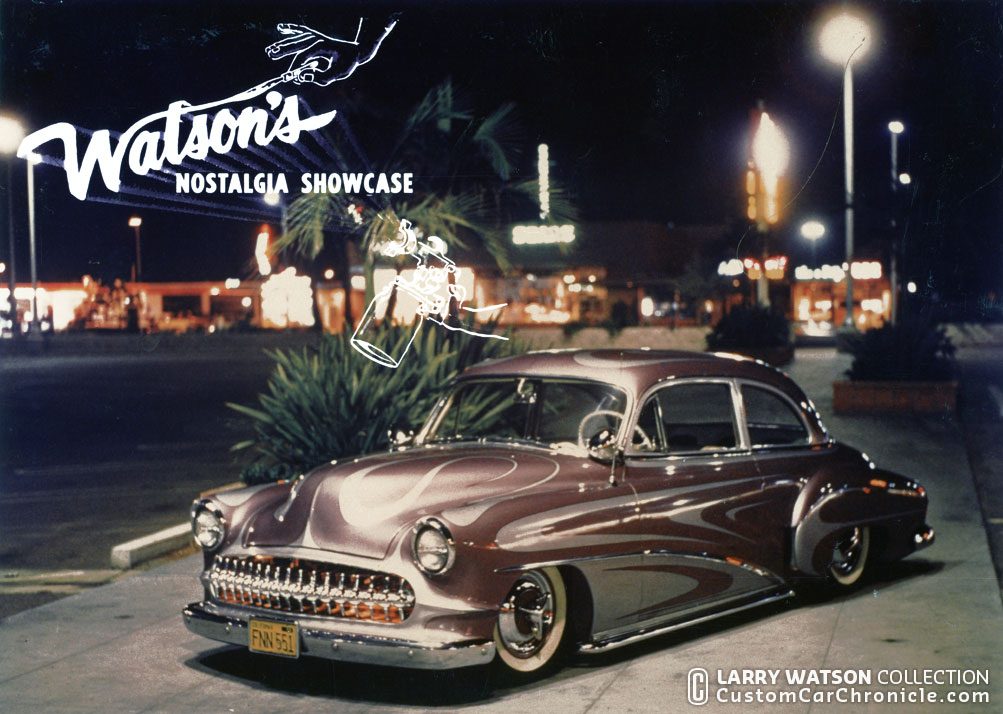 Larry used one of the photos Lowell had taken at the night shoot as a promo card. He added his Logo and the word Nostalgia Showcase being sprayed from a spray gun an had them duplicated. He would hand these photo’s out at car shows, to help promote his business.
[divider] 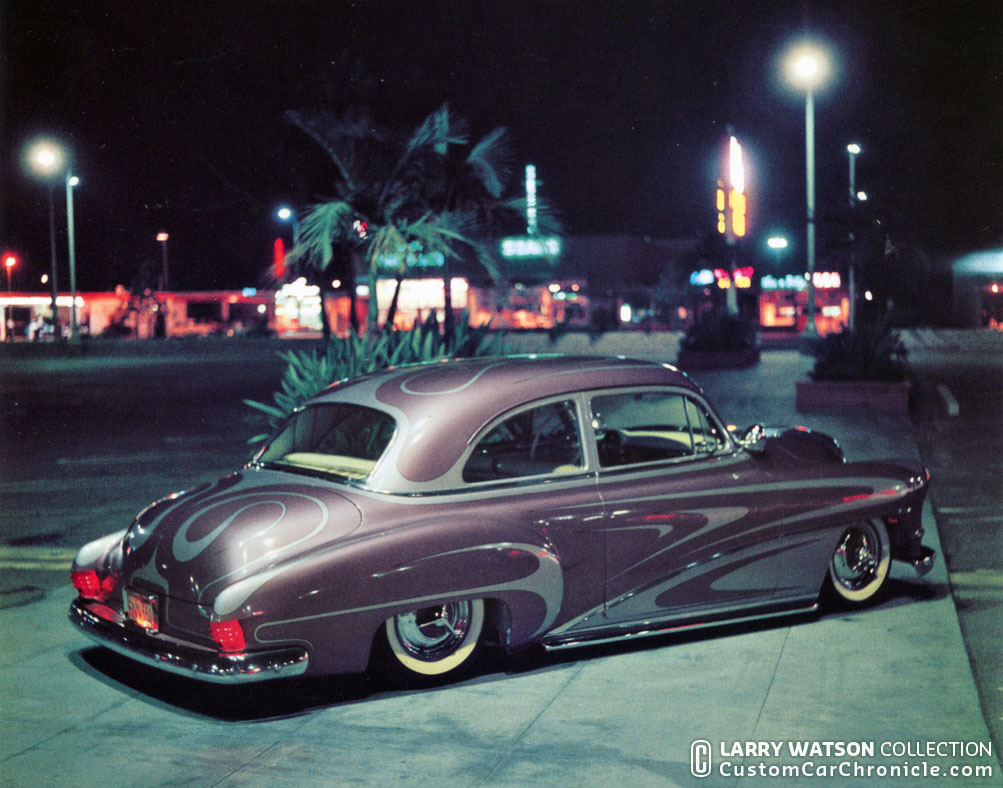 
Another photo shoot with Larry’s 1950 Chevy in its last version was done on the very last day Larry would own his Chevy. Jim Potter asked Larry to select a few of his customer cars and join him to go to Griffith Park for a photo shoot with multiple cars, as well as all the cars individual. Besides taking photos of the cars Jim asked the people who came with him to pose with the cars. And Larry was asked to fake strip his own Chevy, so that jim would be able to use photos from this photo shoot in several upcoming publications. Later that day Larry handed over the keys of his Chevy, to Jim Becker, and that would be the last time he would ever see his Chevy. 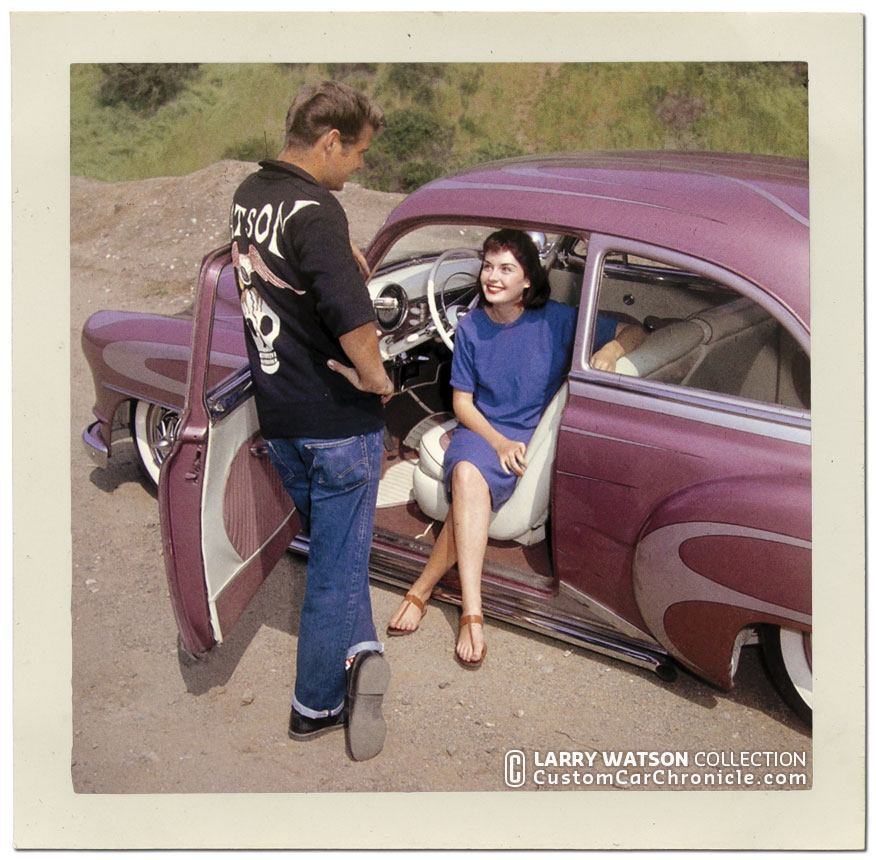 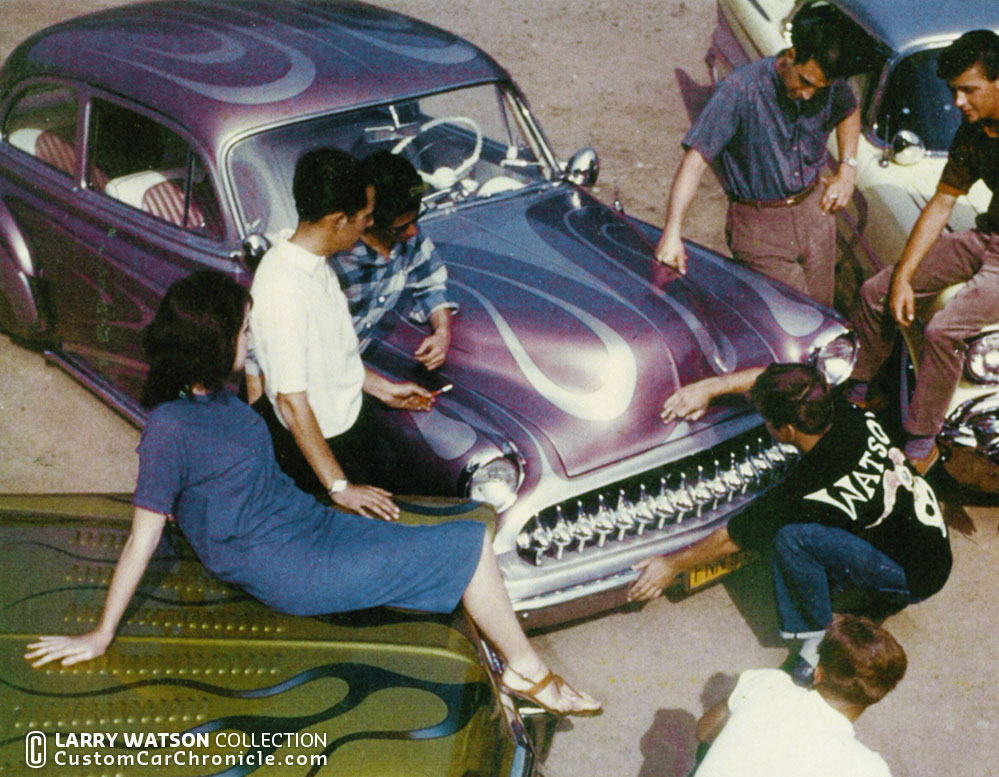 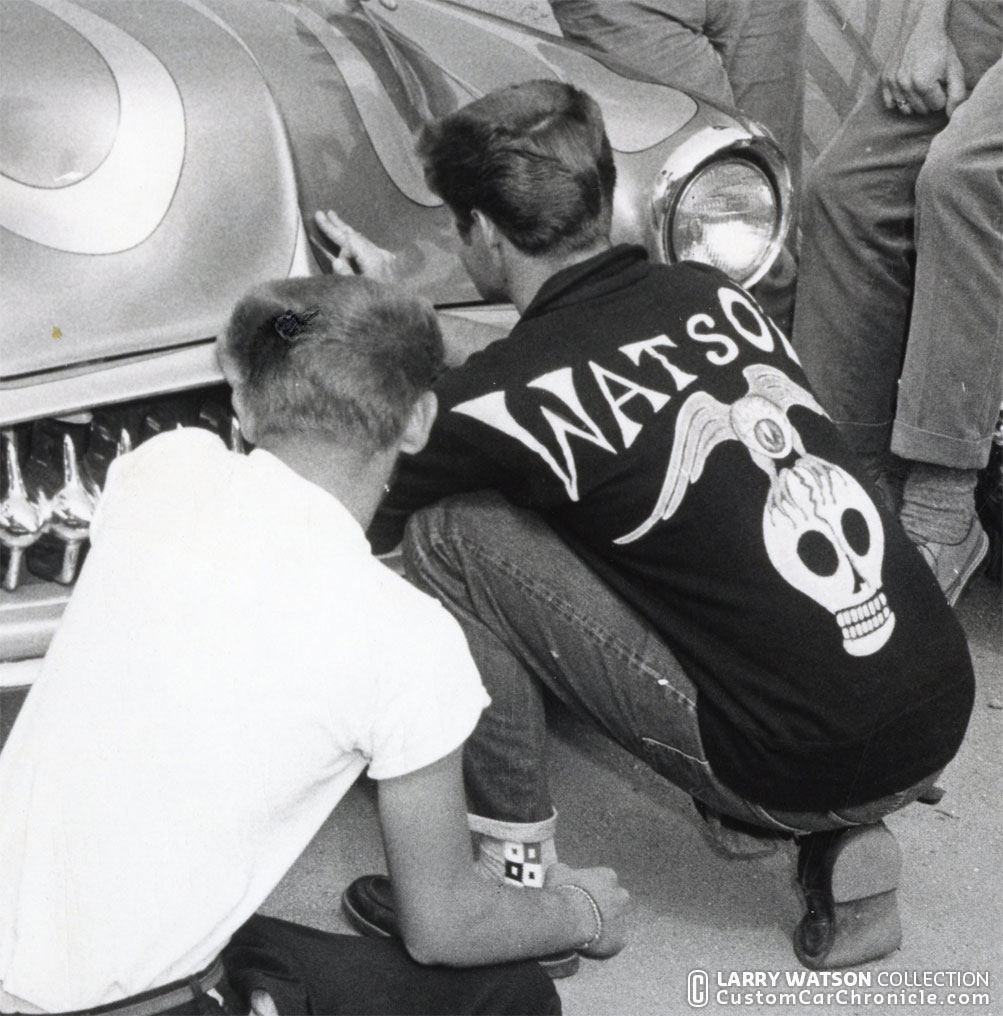 Close up of Larry fake striping. Nice to see the socks and Larry’s great shirt.
[divider] 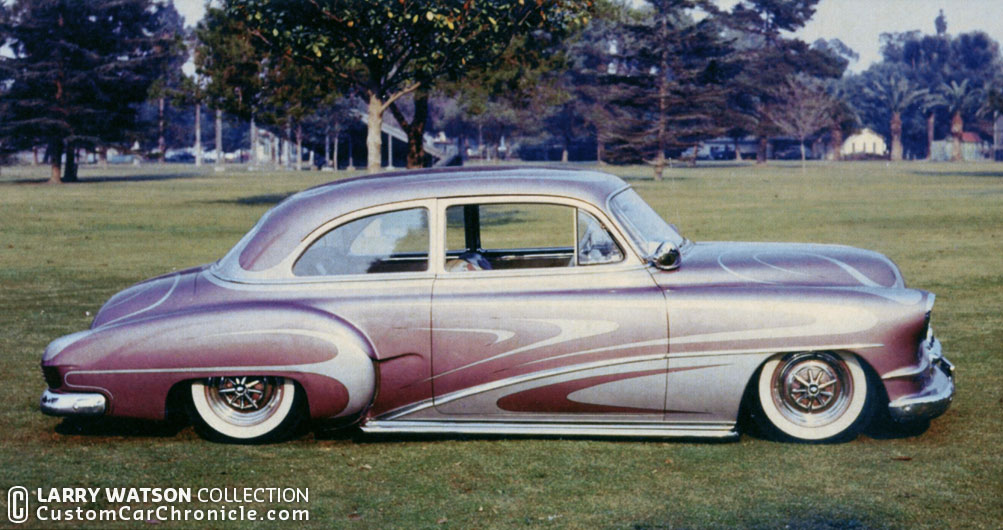 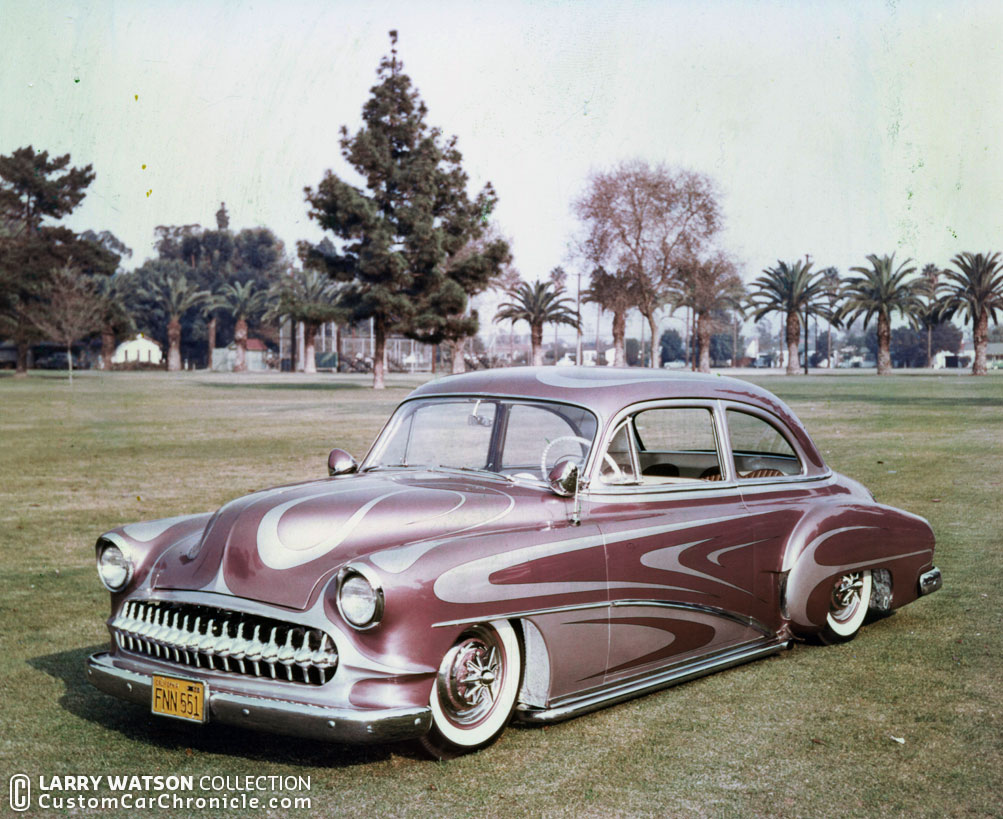 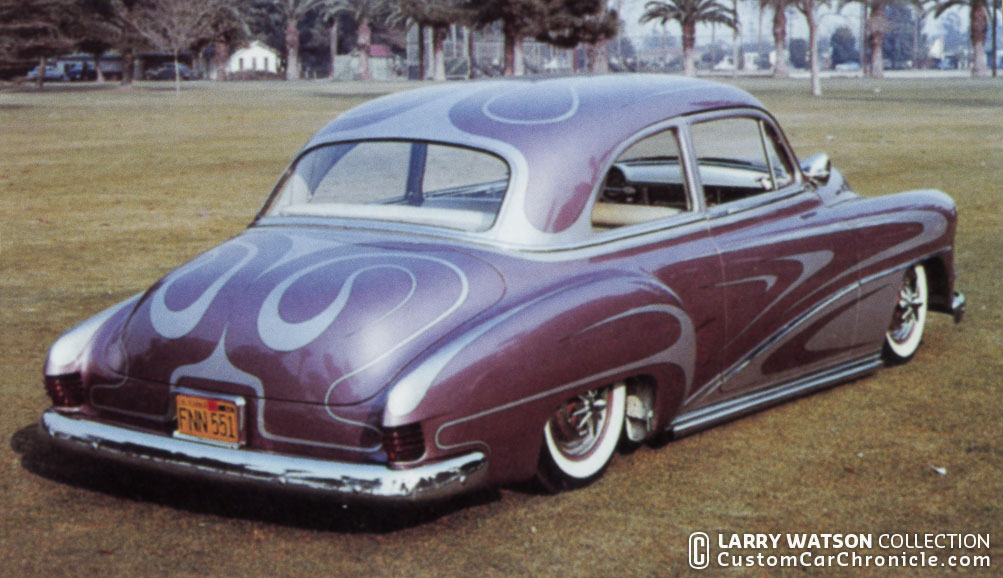 Larry Watson sold his 1950 Chevy in 1958 to Jim Becker from Oregon. Jim paid $1500.- for the Chevy. Eventually the car ended up as landfill under the pillars of the Interstate bridge over the Willamette River in Springfield Oregon. A sad end of a car that has started the career of a color and style genius. 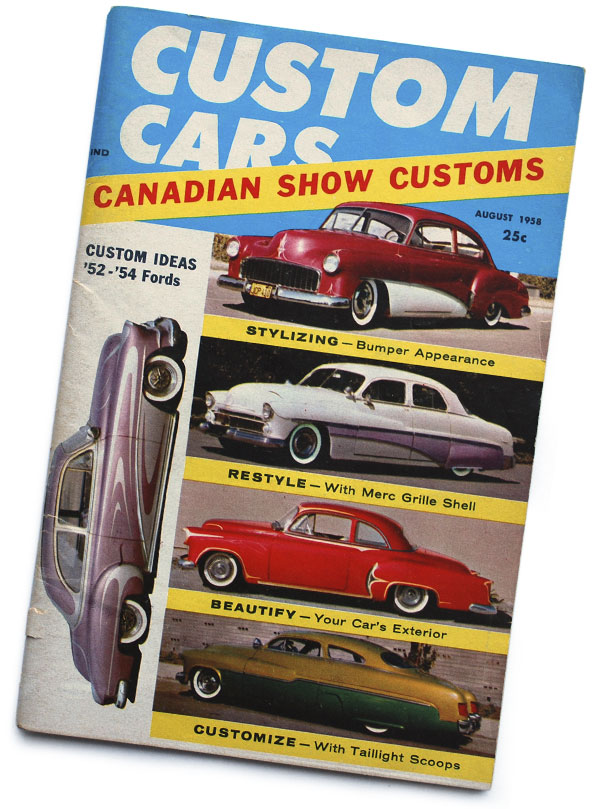 Larry’s 1950 Chevy was used on several magazine covers including this Custom Cars magazine from August 1958, as well as the cover of the Custom Cars 1959 Annual, but both did not have any photos of the car inside.
[divider] 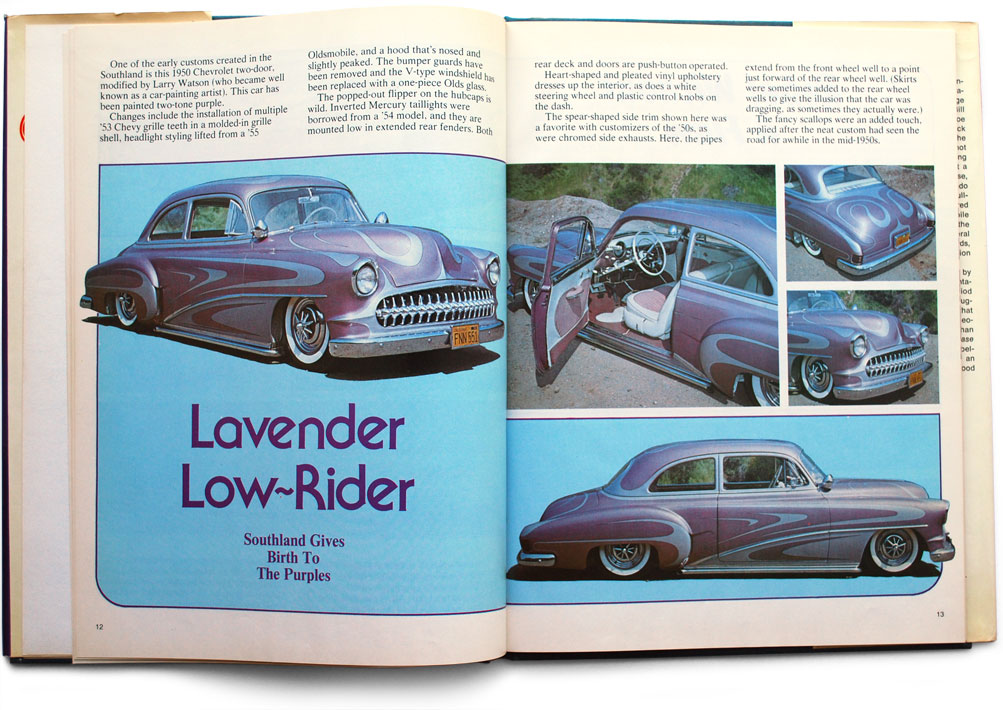 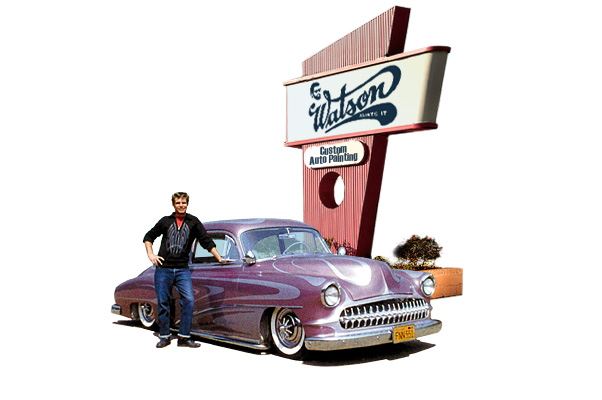 The Larry Watson 1950 Chevrolet had three major versions. All versions are highlighted in three separate articles on the Custom Car Chronicle. 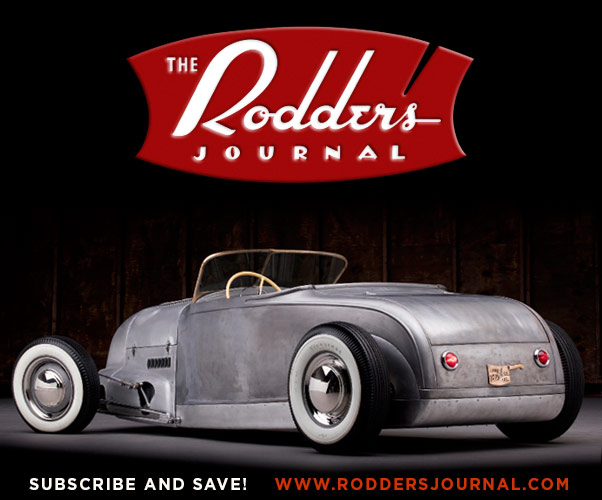 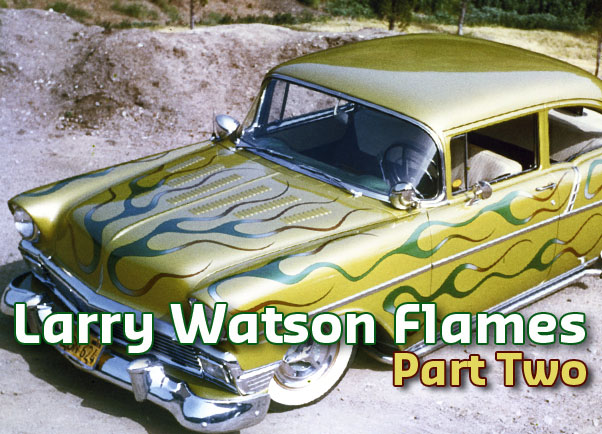 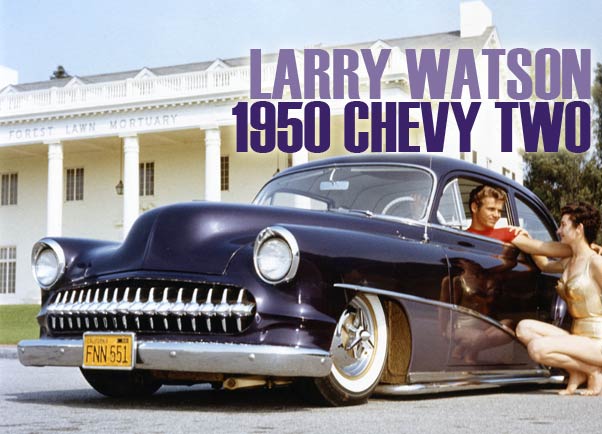 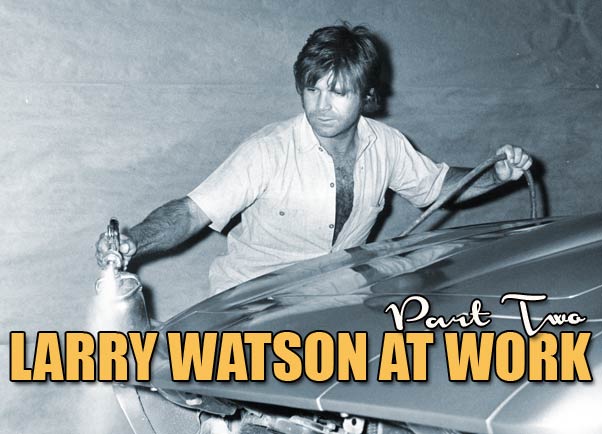