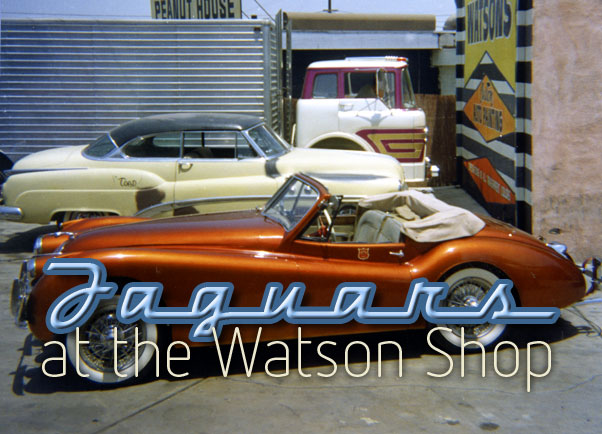 Custom car painting legend Larry Watson was known for its ultra smooth and brilliant colors that turned factory stock cars into stunning rides. Including numerous Jaguars that were updated in Larry Watson’s paint booth which we highlight here.

This article shows a selection of Jaguar Sports Cars that were painted by Larry Watson. The photos come from the Larry Watson Personal Photo Collection. More on Larry’s personal collection can be found in the Larry Watson section on the CCC-Site. Or on the Custom Car Photo Archive.

Back in the late 1950’s all the way up into the 1970’s you could see quite a few “foreign” Sports Cars that were customized. Some had done special body work, others only special paints. To set them apart from the rest. Sports Car purist must have had very bad feeling about all this, especially today. However Larry Watson’s Collection shows a number of extremely good looking special painted Jaguars that are worth being shown on the Custom Car Chronicle. 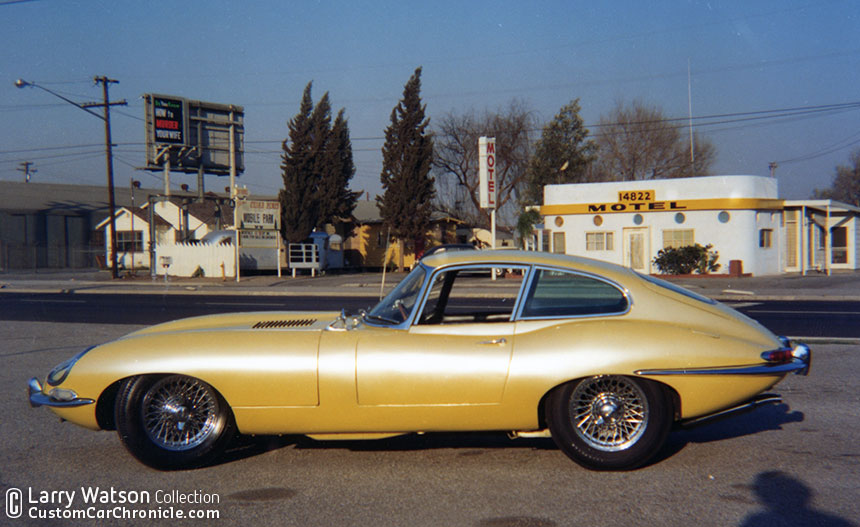 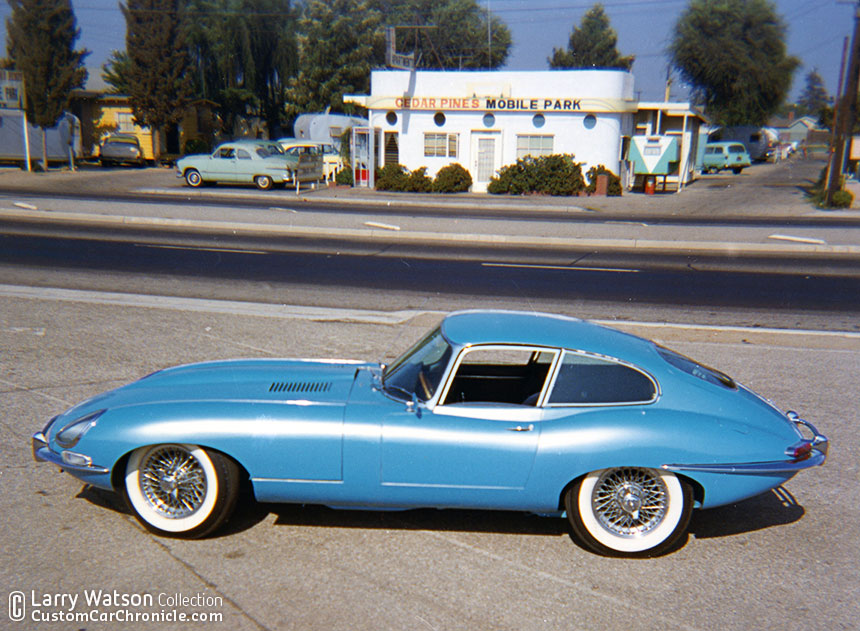 Larry Watson painted this Jaguar E-Type in a brilliant pearl Blue. The color is a nice contrast with the white wall tires mounted on chrome wire wheels. 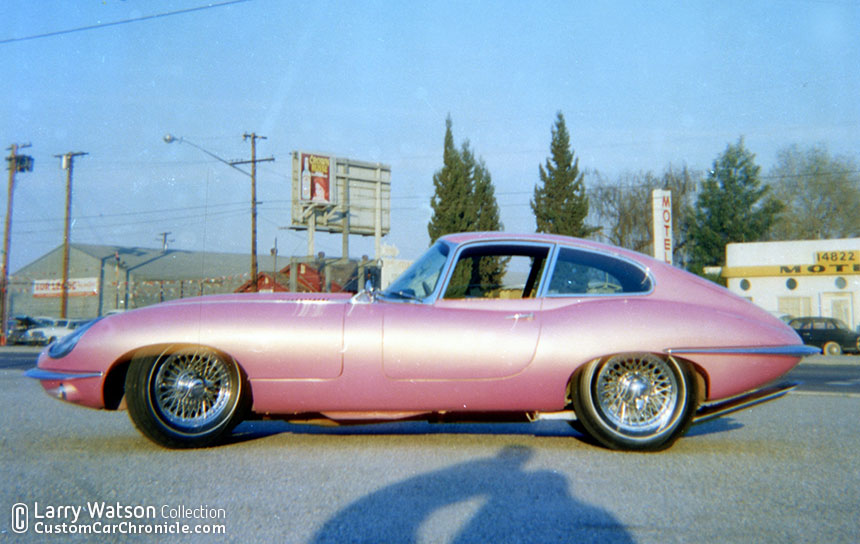 Bill Frie took his E-Type Jaguar at least twice to Larry to have it painted. Here we can see the car after Larry painted it in pearl pink. The car rode onthin line white wall tires mounted on chrome wires. 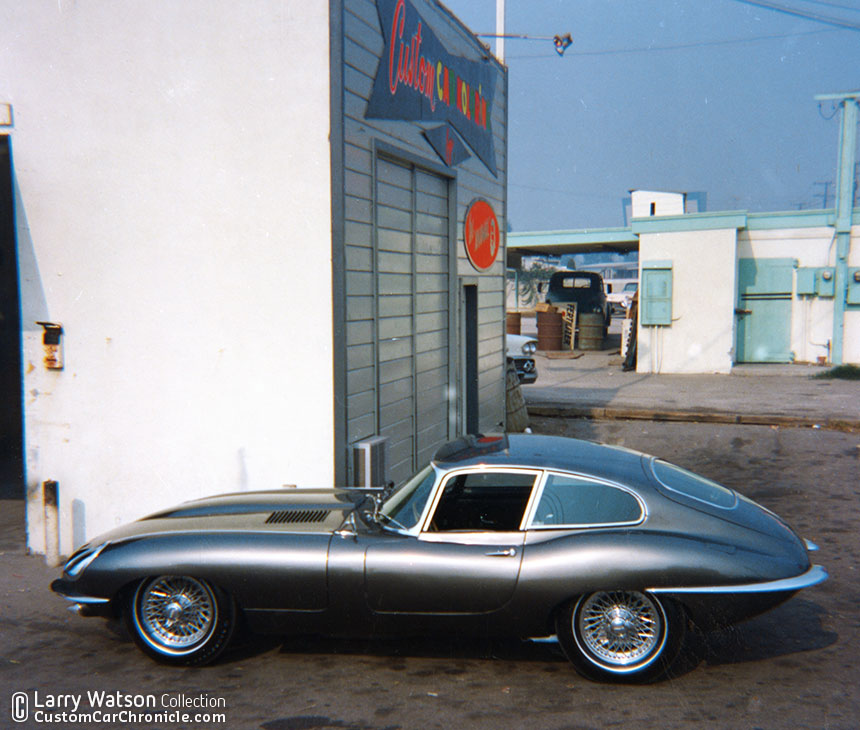 Here is another version of Bill Frie’s Jaguar. This time it was painted a wonderful pearl gunmetal. 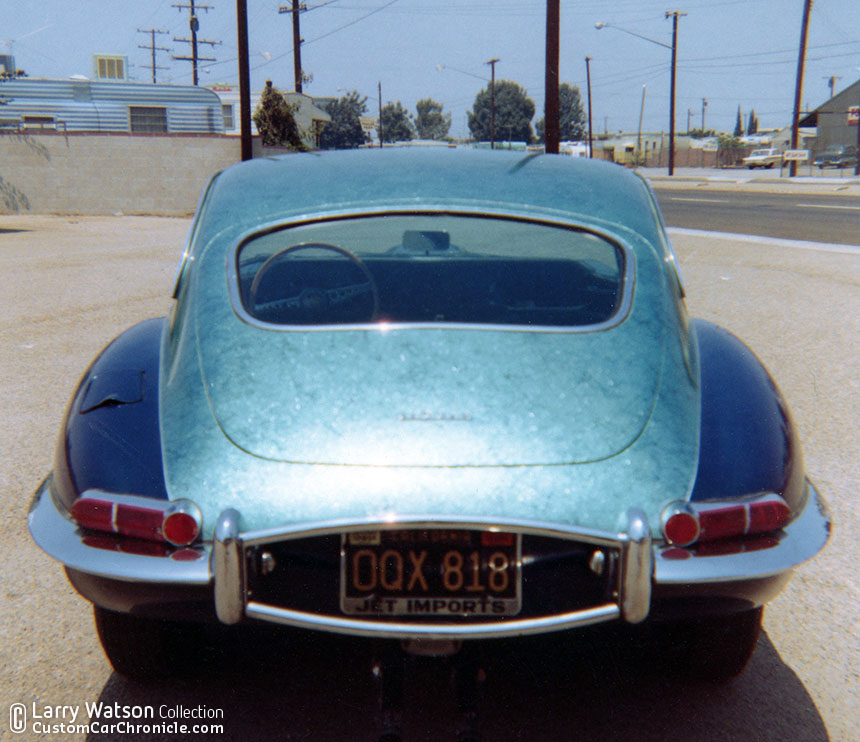 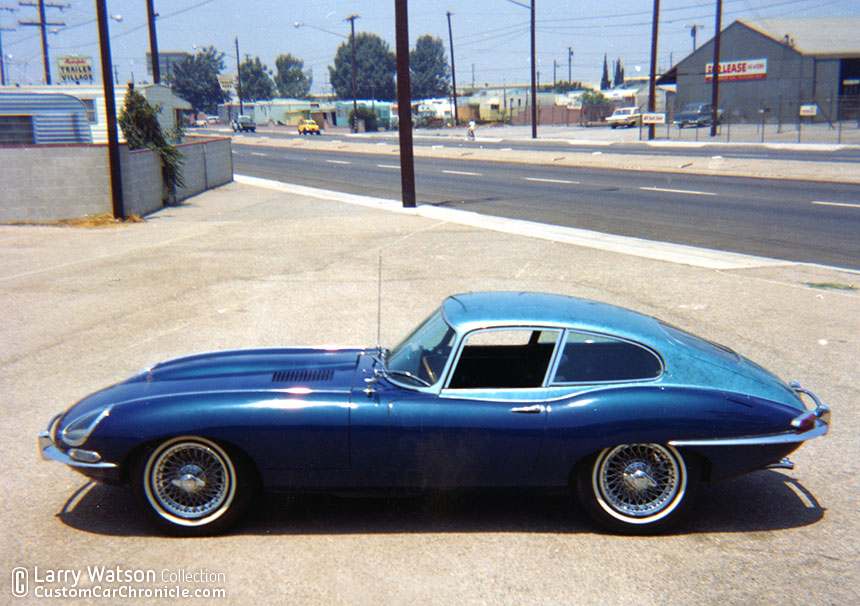 Two photos of this great looking Jaguar E-Type. Larry Watson painted the car in Candy dark blue with a lighter top portion in light blue pearl with dark blue cob webbing added. Can you imagine driving this up to a concours type of event today. 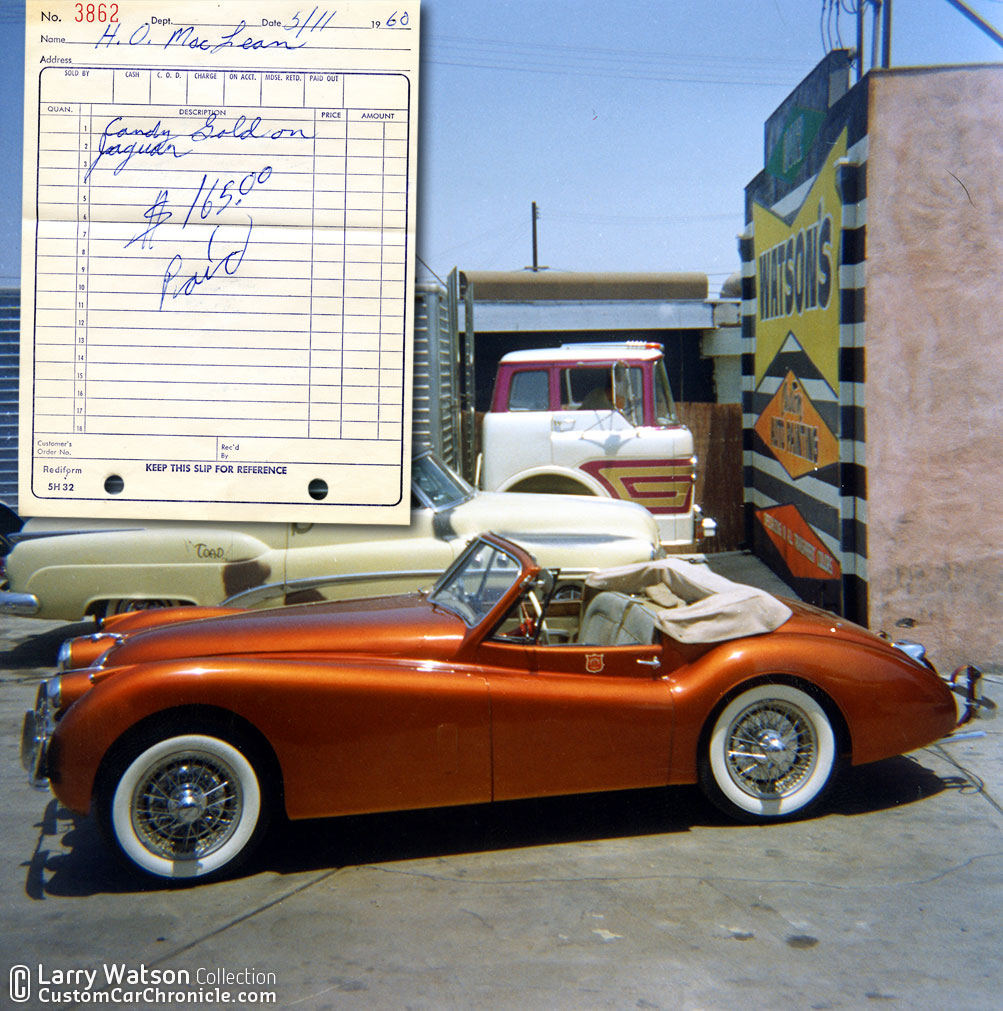 This photo, taken at Larry Watson 9012 Rosecrans blvd. Shop in Bellflower, shows the Jaguar XK he painted for H.O. MacLean. The paint job in Candy Gold cost a staggering $165.00 in 1960. In the back ground we can see Jim Streets (Skonzakes) Golden Sahara truck. This was the truck Jim specially bought and customized to drive the Golden Sahara around the US. More an that will be covered in another CCC-Article. 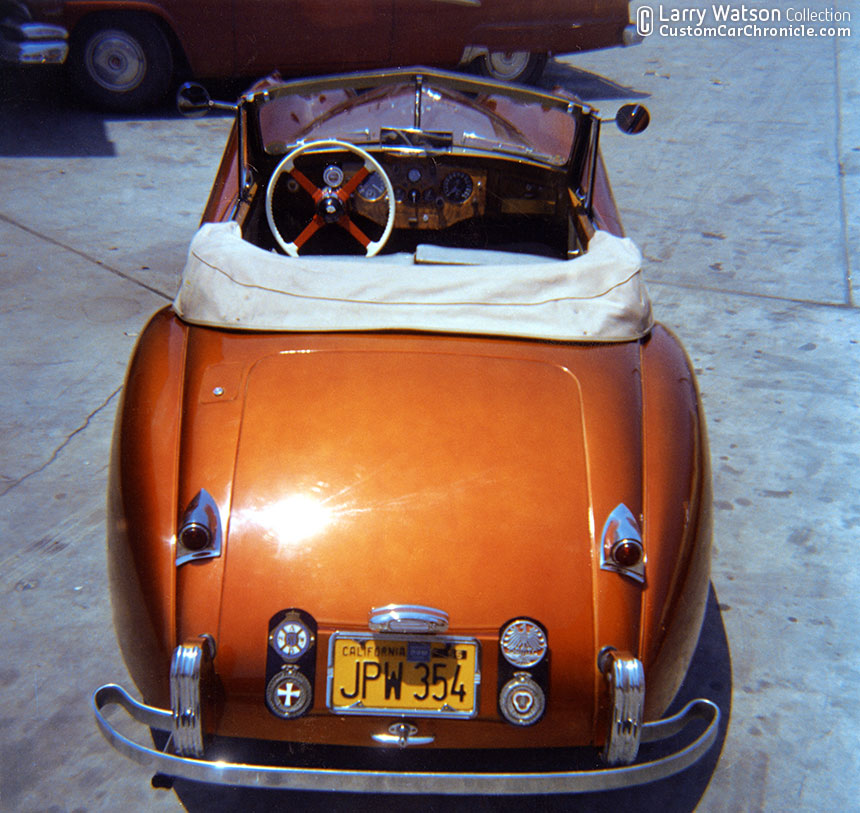 Another photo of MacLean’s Jaguar showing the back of the car. 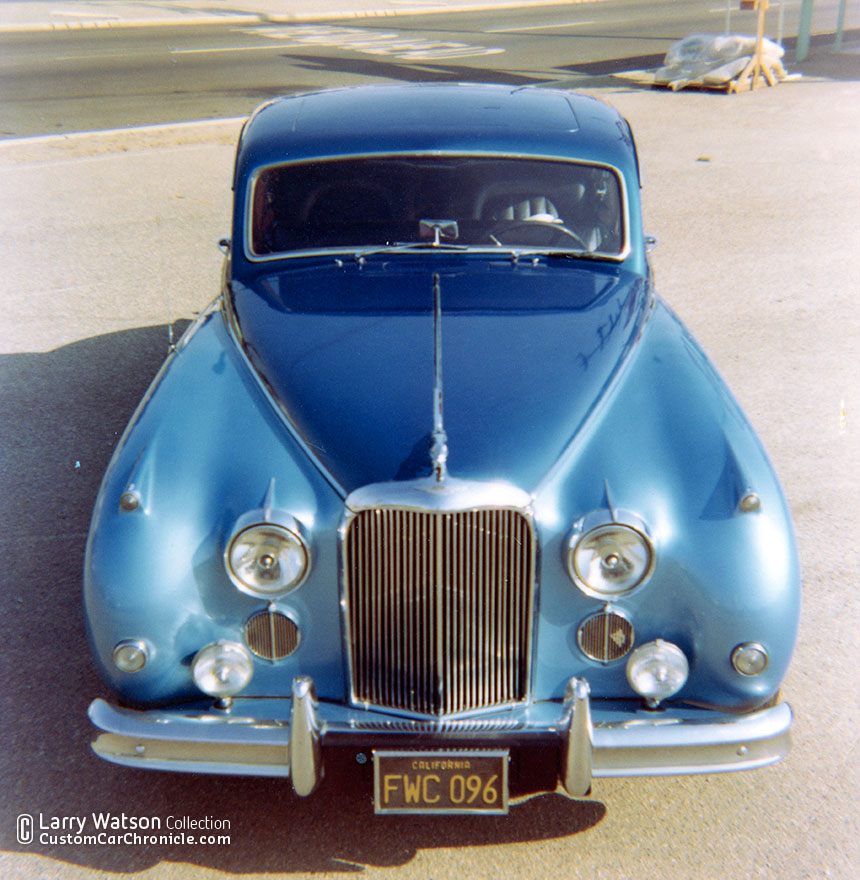 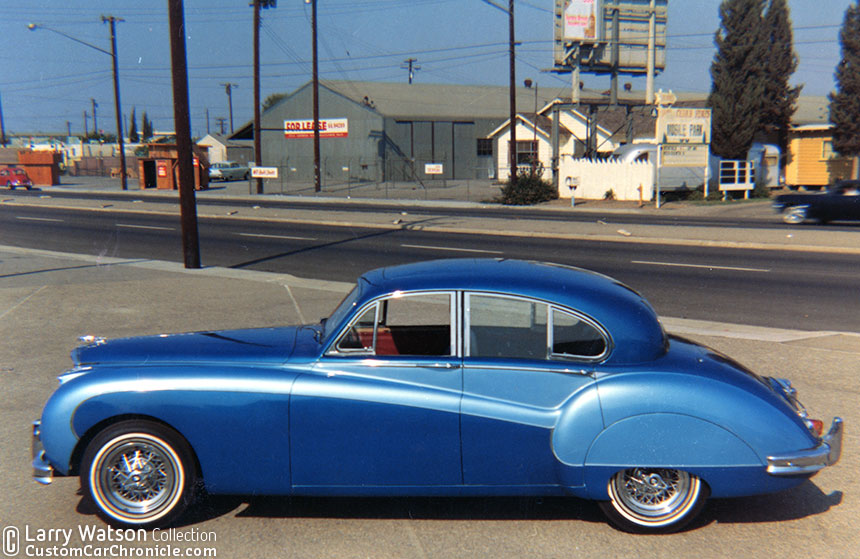 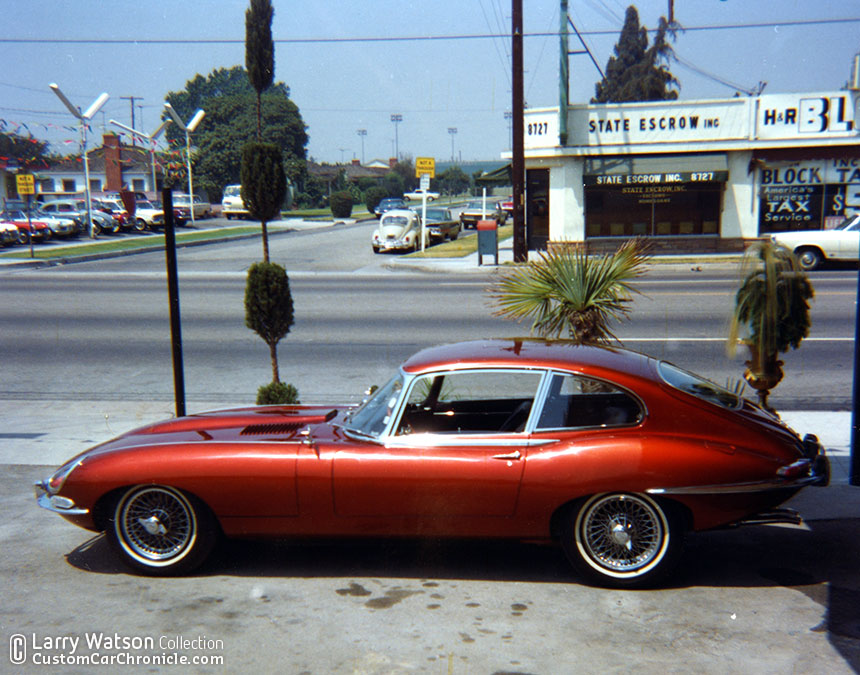 Later in the late 1960’s or early 1970’s when Larry was at the Firestone Blvd shop in Downey he painted this E-Type in a wonderful candy red.

One last photo of the pink pearl painted Jaguar for Bill Frie. Not because this is such a nice photo.. its not. But it does show how a lot of the higher angle photos in this collection were taken. The photographer can be seen as shadow on the right. Larry or one of his friends held the camera high above their head and pointed the camera in the direction of the car hoping the whole car would be captured. Or perhaps they used a top viewer camera and hold that upside down so that they were still able to see what was in the lens when they held the camera above their head. A lot of the photos in Larry’s Collection were taken late when the sun was starting to set. Possibly when the crew was getting ready to leave for home. They would then snap a few snapshots from the cars that had been worked on that day, or were visiting the shop. This photo is one of those, and due to the setting sun there was not enough light, so there is a lot of movement in this picture below. 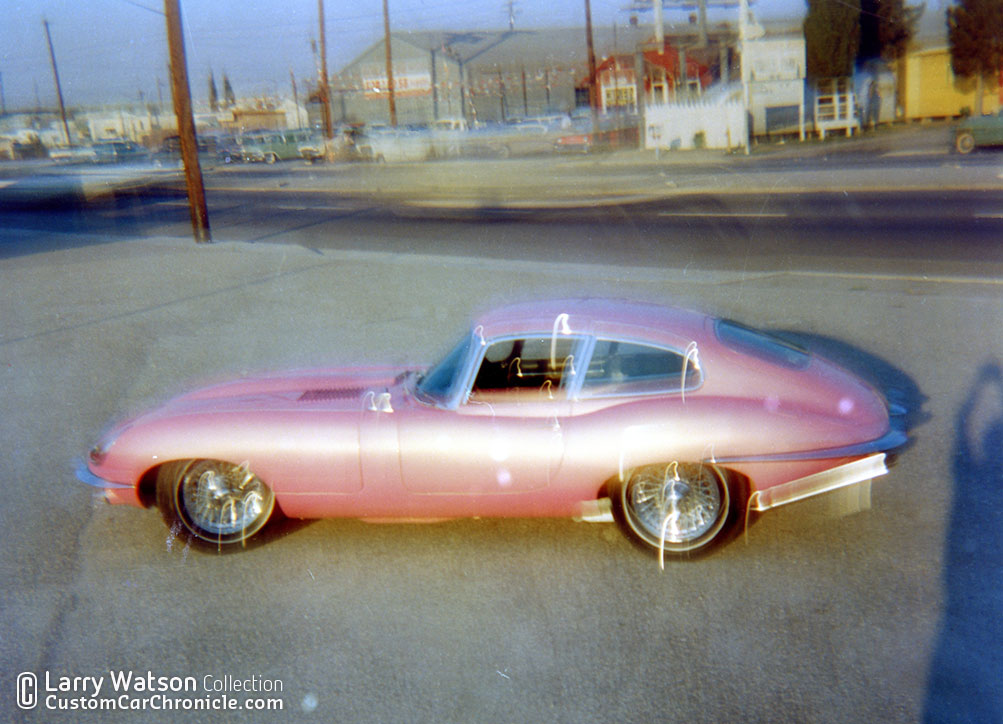 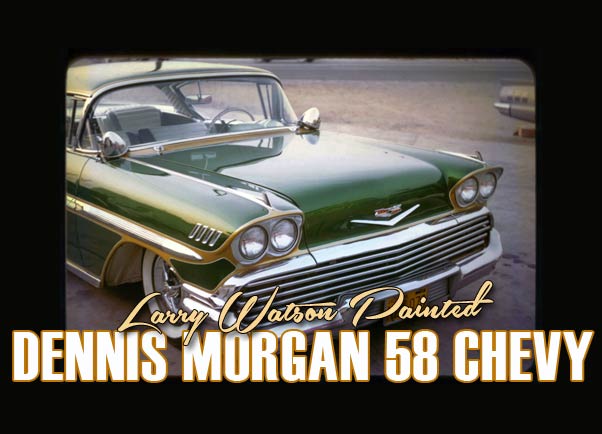 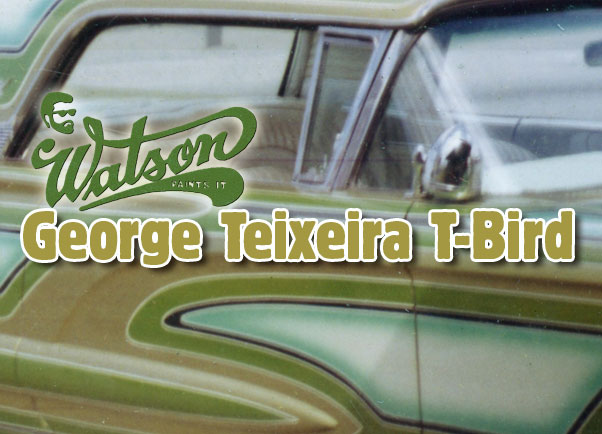 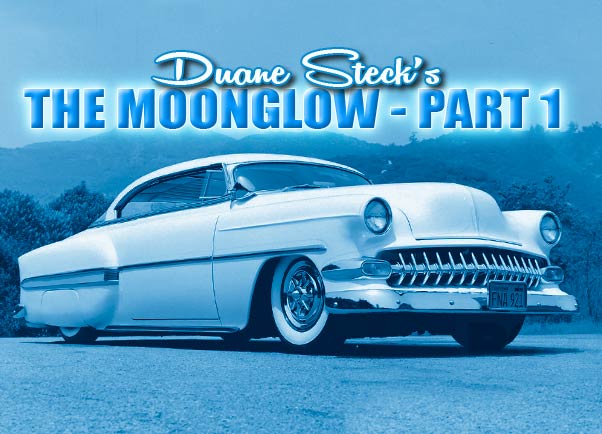