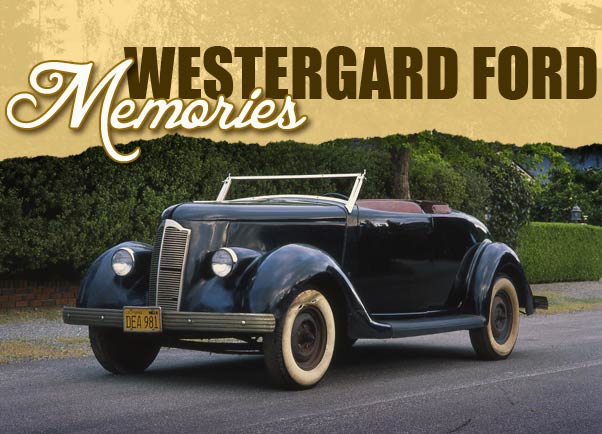 Anthony from Sacramento Ca. remembers how he worked on Vern Simons Harry Westergard restyled 1936 Ford Roadster in the 1940s.

In 2010 I was in contact with Tim Cunha about the Max Ferris / Vern Simon’s 1936 Ford restyled by Harry Westergard, about having the car being part of the Customs Then & Now exhibit at the 2011 GNRS. Tim discussed the possibilities with Vern of brining the car over to Pomona for the exhibit. The car was still in as found condition, and was in need of at least some restoration work. Fortunately Vern agreed and the car was part of the early Customs section at the GNRS exhibit. More about this 1936 and its full history can be found in the CCC-Article about the car. 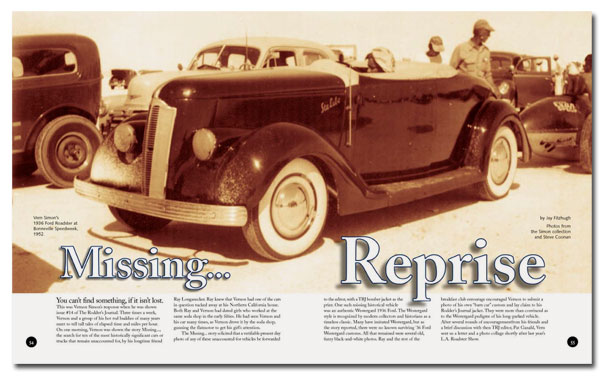 Some time before all this Vern’s 1936 Ford roadster was featured in the Rodder’s Journal issue #19, but the full story and if this in fact was an original Harry Westergard Custom was not known at the time the article was published. Later in issue #47 of the Rodder’s Journal, their 15 year anniversary issue, one photo of Vern’s Ford Roadster was shown again on page 122 as part of the TRJ favorite Customs section. Anthony from Sacramento happened to see the photo of Vern’s 1936 Ford Roadster and recognized it from his childhood times he spend working with Harry Westergard. So he wrote a letter to the Rodder’s Journal for Vern Simon’s. 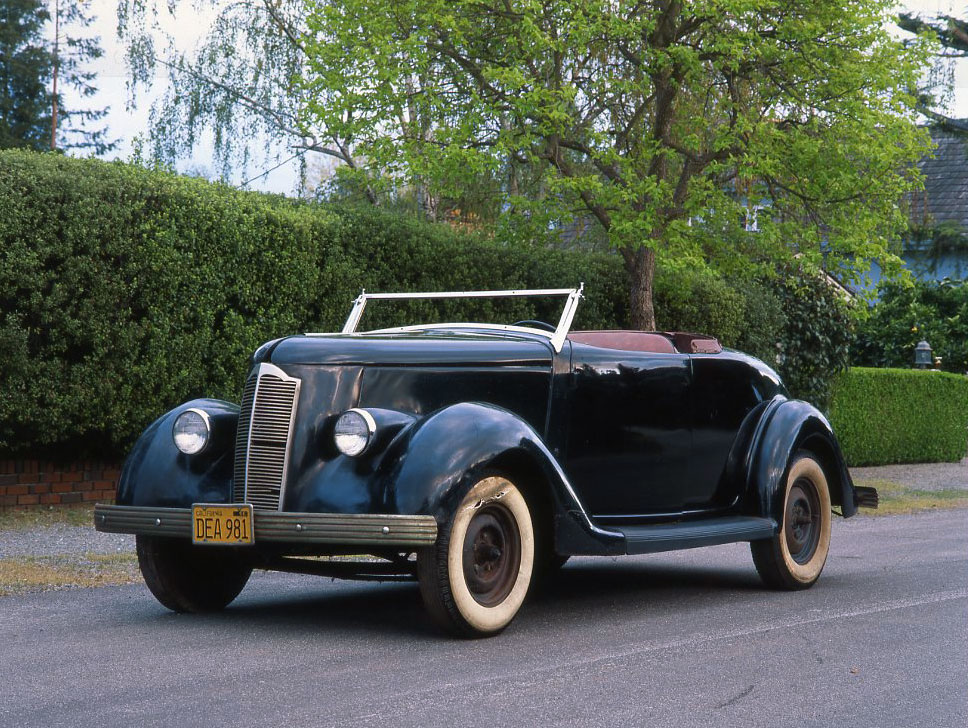 The photo caption in the Rodder’s Journal issue 47 (the one Anthony saw) read;  We were there the day Vern Simons pulled his ’36 roadster out for the first time since 1961. He purchased it off a Northern California car lot in 1949, raced it at Bonneville in ’52 and pulled the flasmotor in ’56 and it hasn’t run since. Vern is now putting it back on the street. The nearly 60-year-old black lacquer will be retained with all of its patina. The best part is that it is most likely an original Westergard Custom.
[divider]

Vern eventually got Anthony’s letter, and the two got in contact to talk about the Roadster. Tim Cunha was able to scan the original letter Anthony wrote for Vern, in which he explained about Harry Westergard working on his roadster and a few other historic events from back when Anthony was a kid helping out Harry Westergard. Anthony was 82 years old when he wrote the letter, and we know now that some of the dates mentioned are a bit off, but the rest is just very interesting. How often does it happen you get to know somebody who worked with Harry Westergard back in the 1940’s! 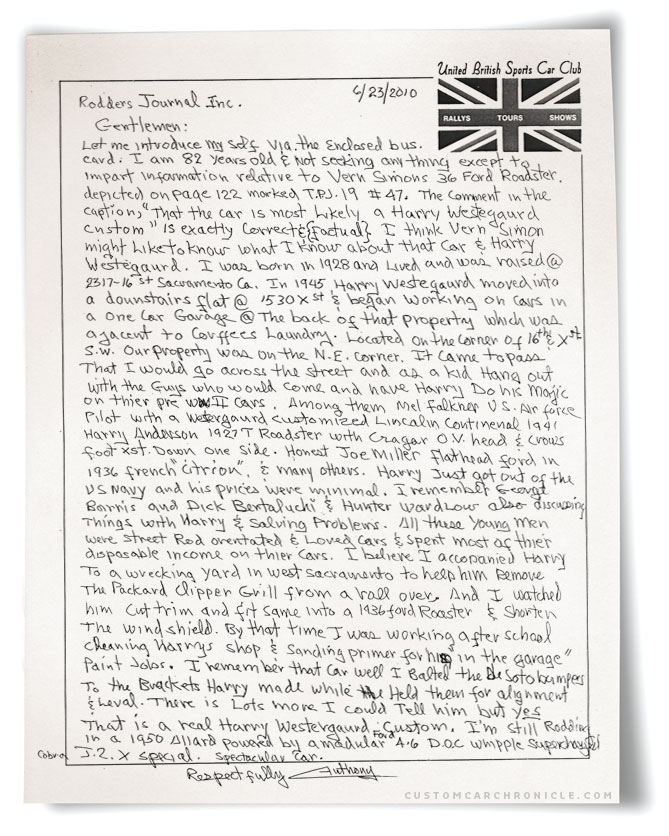 Transcript from the copied letter

Let me intro introduce myself. I am 82 years old & not seeking anything except to impart information relative to Vern Simons 36 Ford Roadster depicted on page 122 marked TRJ #47. The comment on that caption “That the car is most likely a Harry Westergard Custom” is exactly correct & (Factual). I think Vern Simon might like to know what I know about that car & Harry Westergard.

I was born in 1928 and lived and was raised at 2317-16 st. Sacramento Ca. In 1945 Harry Westergard moved into a downstairs flat at 1530 X st. and began working on cars in a one car garage at eh back of that property which was adjacent to Corffees Laundry. Located on the corner of 16th and X st. S.W. Our property was on the N.E. corner. It came to pass that I would go across the street and as a kid hang out with the guys who would come and have Harry do his magic on their pre WWII cars. Among them Mel Falkner, US Airforce pilot with a Westergard 1927 T Roadster with Cragar O.V. head and exhaust down one side. Honest Joe Miller flathead Ford in 1936 French “Citroën”, and many others.

Harry just got out of the SU Navy and his prices were minimal. I remember George Barris and Dick Bertolucci and Hunter Wardlous (sp) also discussing things with Harry and solving problems. All these young men were street rod orientated and loved cars and spend most of their disposable income on their cars. I believe I accompanied Harry to a wrecking yard in west Sacramento to help him remove the Packard Clipper Grille from a roll-over. And I watched him cut trim and fit same into a 1936 Ford Roadster and shorten the windshield. By that time I was working after school cleaning Harry’s shop and sanding primer for his “in the Garage” paint jobs.

I remember that car well, I bolted the De Soto bumpers to the brackets harry made while he held them for alignment and level. There is lots more I could tell him, but yes that is a real Harry Westergard Ford Custom.
I’m still rodding in a 1950 Allard powered by a modular 4.6 D.O.C. whipple Supercharged Cobra special. Spectacular car. 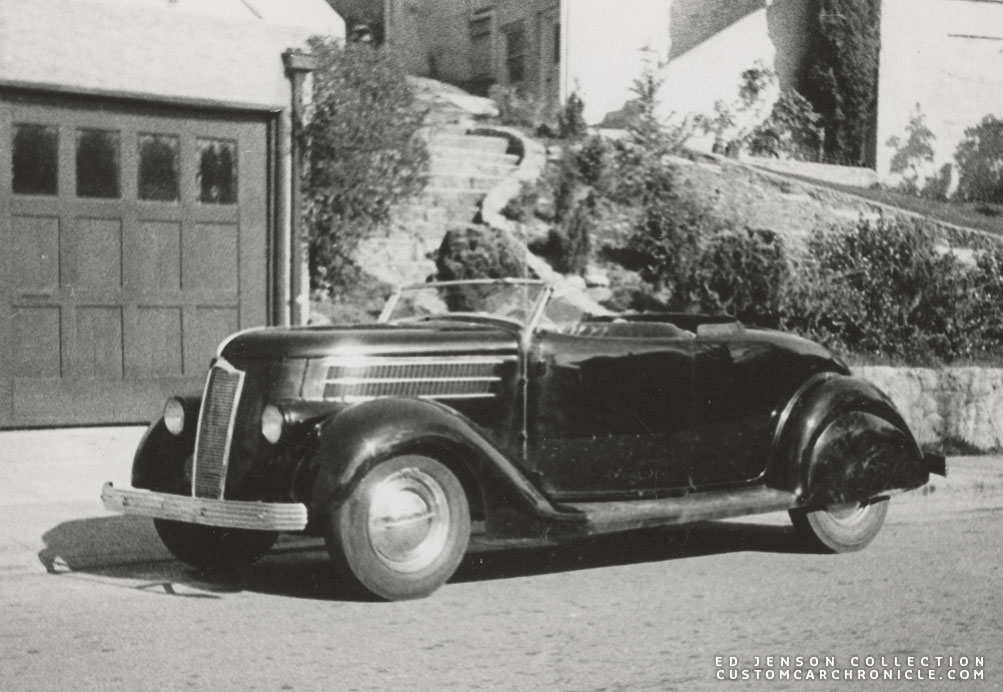 An early 1940’s photo of the Harry Westergard Roadster.
[divider] 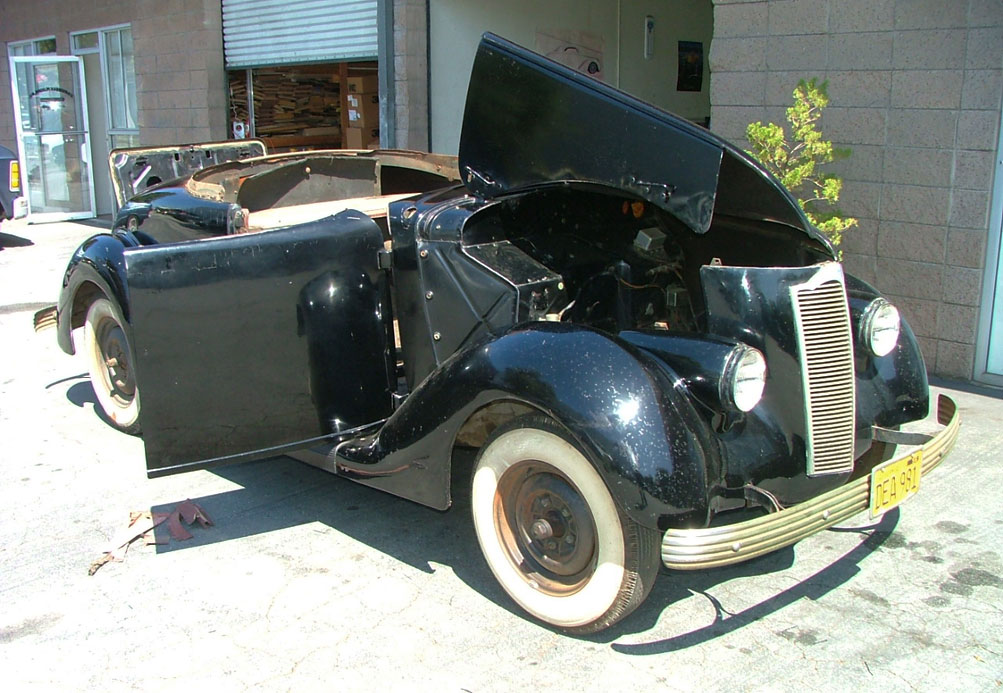 Vern’s Roadster being taken apart for the restoration.
[divider] 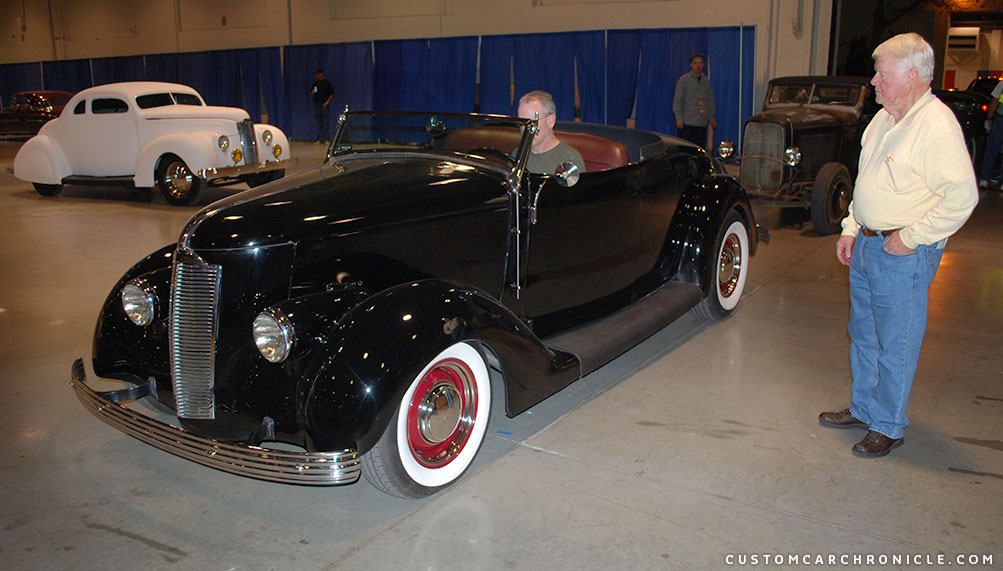 Vern on the right  looks how a friend drives the freshly restored original Harry Westergard roadster into the Customs Then & Now exhibit building at the 2011 GNRS.
[divider]

Many thanks to Anthony, Vern Simons and Tim Cunha for sharing the info. 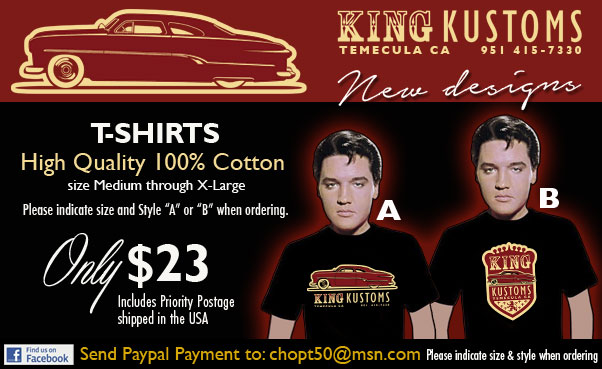 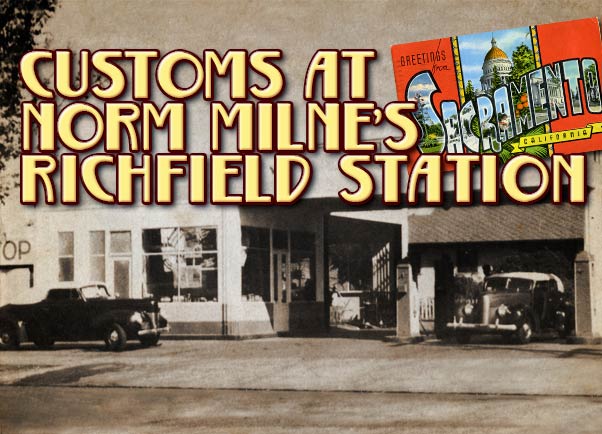 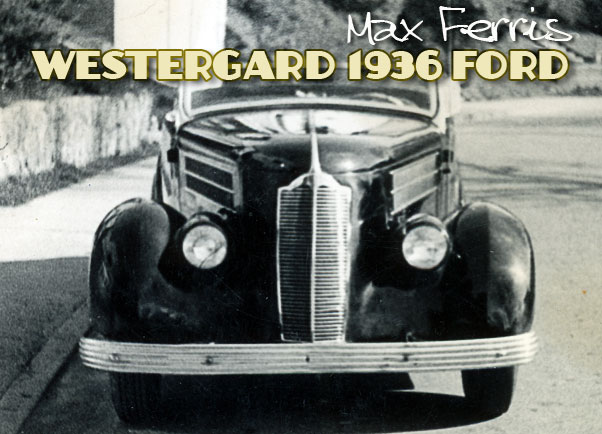 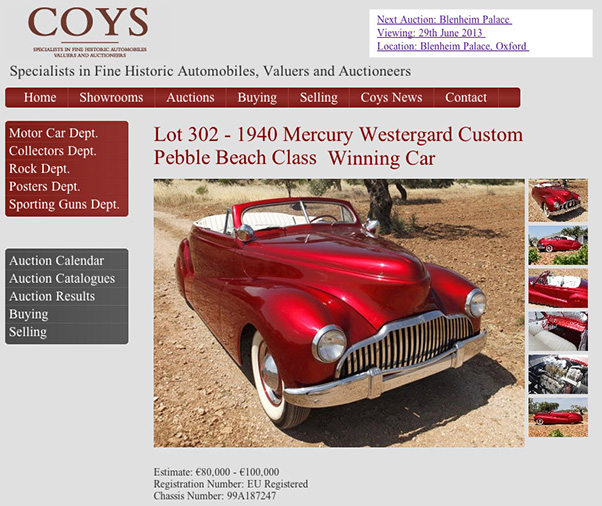 Westergard Mercury not sold in Greece