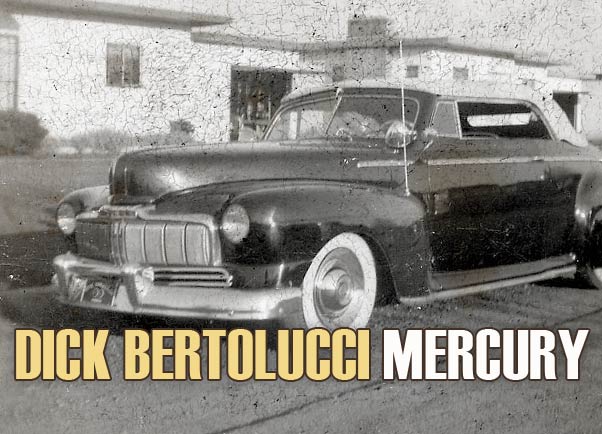 In 2008 I came across the amazing Jim Roten Photo Collection. A collection of mostly mid to late 1950’s custom Car photos. Amongst all these photos there where a couple of photos that looked to be older. Three of them showed an 1946-48 Mercury convertible with padded top in a typical late 1940’s or early 1950’s style. At the time I tried to get in touch with Jim, to ask him about his amazing photo collection, but in particular the photos of this 1946 Mercury. Other than Jim giving me permission to ad his collection to the Custom Car Photo Archive Jim did not really mention much about his collection.

It is now 2014, and I have been in conatact with Jim, with the help of his son Mike. And Jim is sharing a lot of information about the photos he took in the 1950’s, as well as other great stories from way back when. So I asked Jim about the story behind the 1946-48 Mercury in his collection. It turned out that the Mercury convertible belonge to a close friend of Jim’s, Ron Zimmerman. Ron bought the car in 1954. And perhaps even more important was the fact that Jim mentioned that Ron had never been able to find out much more on the cars history, other than that it was build by Dick Bertolicci in the late 1940’s. 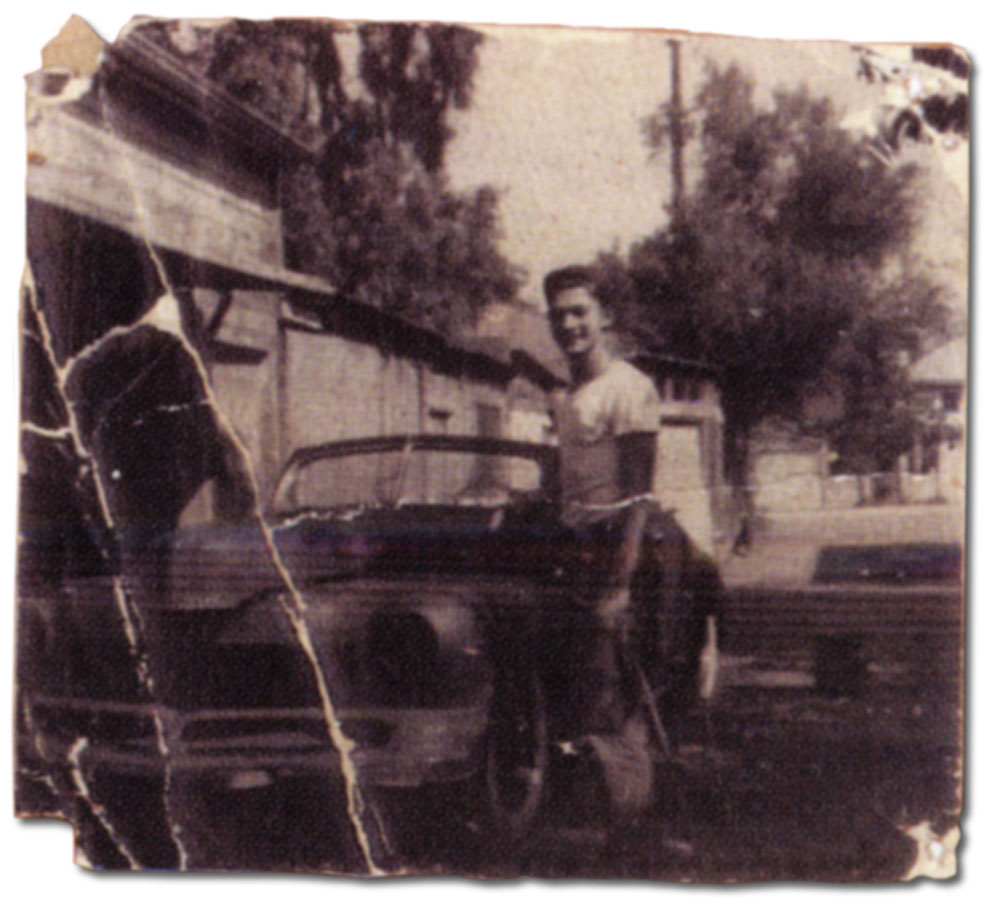 A young Dick Bertolucci in 1949 in front of his shop with the in progress 1948 Mercury owned by Johnny Lehman. (Photo courtesy of Garage Magazine)
[divider]

I already had created a list of cars and builders that could help me identify this Mercury several years earlyer, and one of the cars on this list was Johnny Lehman’s 1948 Mercury build by Dick Bertolucci. Not having enough info or photos to make a positive identification back the, the new information provided by Jim, directly from the 1954 owner Ron Zimmerman gave me enough input to be able to finally do a positive ID on the three photos in the Jim Roten Collection.

The Mercury was build in 1949 by Dick Bertolucci for owner Johnny Lehman and was shows in the early 1950’s Sacramento area as well as being used on the roads as Johnny regular ride. This story on the CCC is not complete, since we have been unable to find much info on the car before and after Ron owned it. But we hope this article will help find some more info on this cars early years, as well as what happened to it after Ron Zimmerman sold it. If any of the readers knows anything more about this car, please let us know, we would love to add your story to the article. 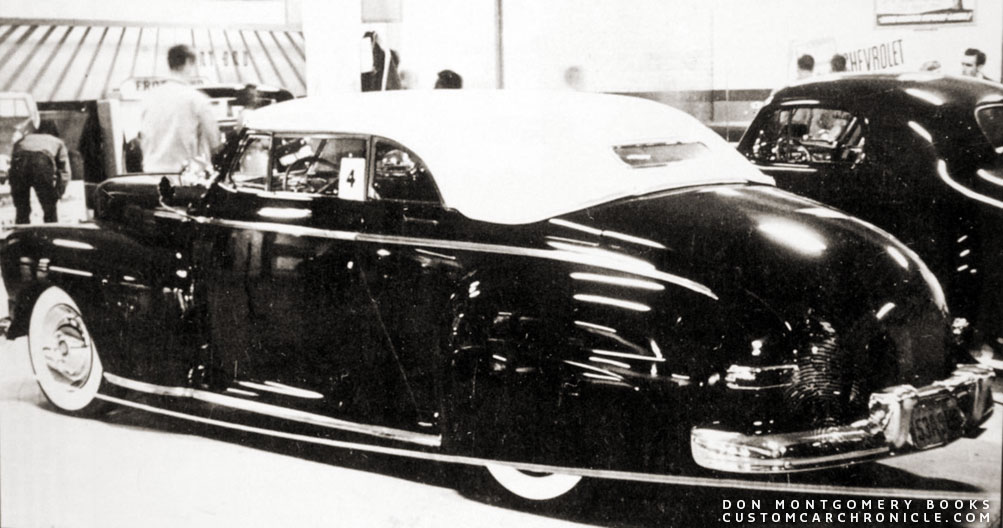 Johnny’s Mercury at an early 1950’s Sacramento Car Dealer show. 1949 Mercury bumpers and taillights were used to update the 1948 Mercury. They work really well on the car. (Photo courtesy of the Don Montgomery books)
[divider] 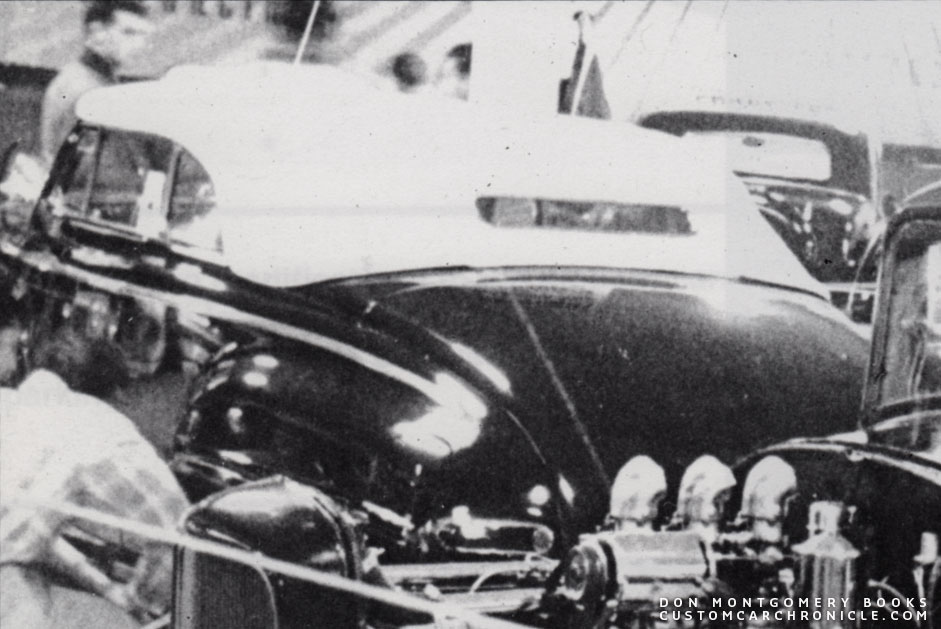 The Bertolucci 1948 Mercury the same early 1950’s Sacramento show as above. (Photo courtesy of the Don Montgomery books)
[divider] 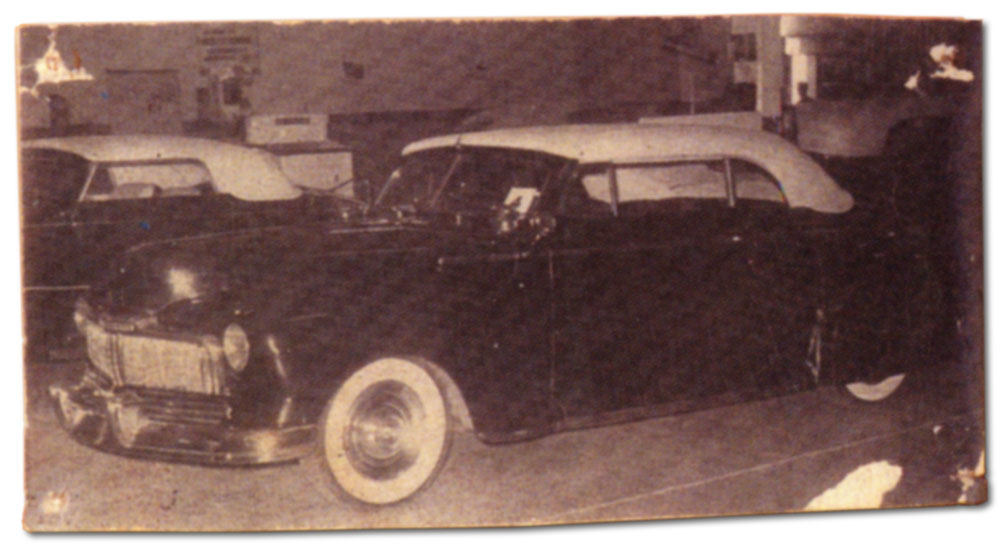 Most likely the padded top was produced by Hall in Oakland. A lot of Nor Cal Custom used Hall for their padded tops. (Photo courtesy of Garage Magazine)
[divider]

Ron Zimmerman now lives in Shingletown, in the northeast of Weed, California. He was 18 years old when he purchased the Bertolucci 1948 Mercury in finished condition in 1954. Ron and Jim Roten were seniors at Chico High School. Ron bought the car for a man by the name of Smiley, from Sacramento, Ca. At this time we are not sure if Smiley and Johnny Lehman are the same person, perhaps they are, perhaps Smiley was already a new owner after Johnny. Smiley did mention when Ron bought the car that the car was originally built by Bertolucci in Sacramento in the late 1940’s. 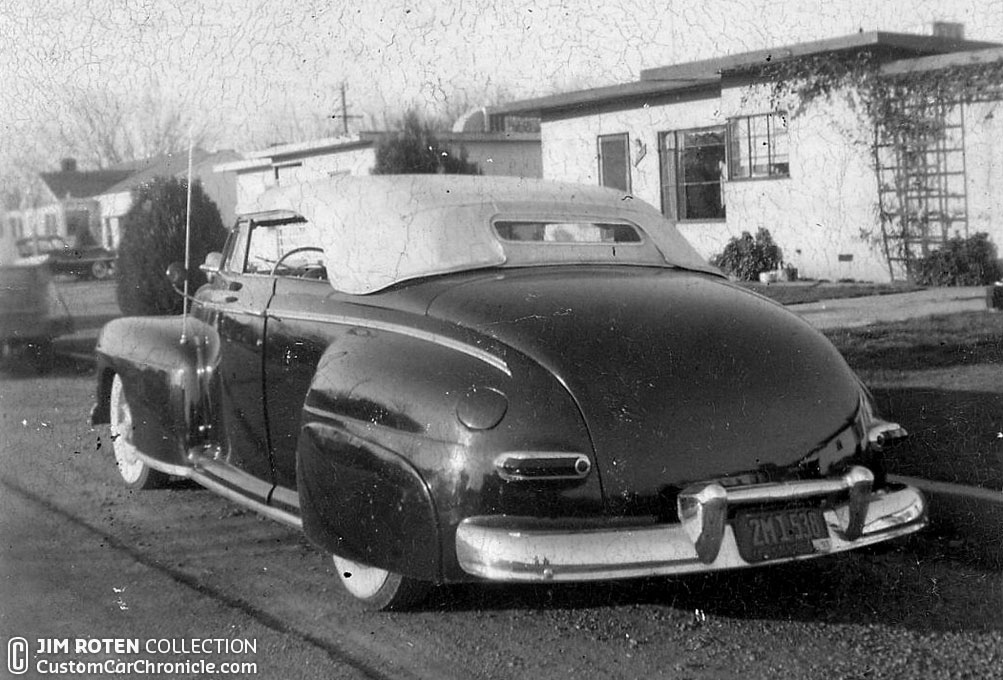 Jim took the three photos of Ron’s Mercury in front of Ron’s house in Chico, California in 1955. Sadly the photos have been faded and cracked badly, but we still can see the super straight body work and perfect reflections.
[divider] 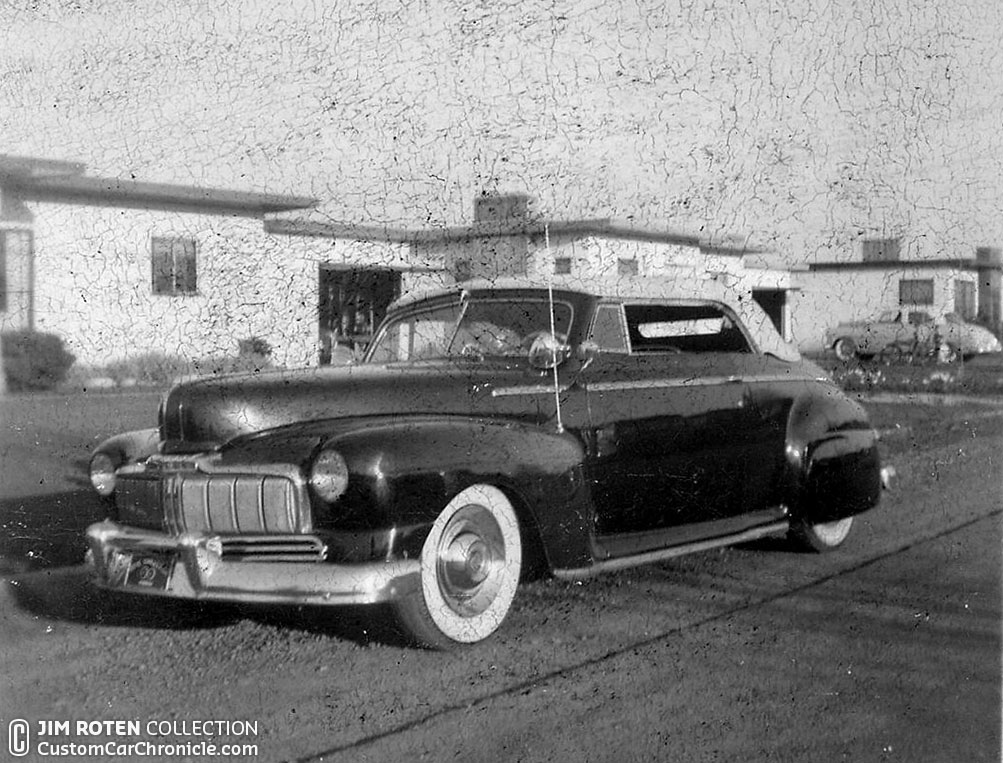 The headlights were frenched, the fenders molded to the body and the windshield was chopped mildly. The lowered stance was absolutely perfect and the wide white wall tires, Cadillac Sombrero’s and Appleton Spotlights are all so perfect for the time the car was originally build.
[divider]

According to Jim and Ron, the workmanship on that car was spectacular. Bertolucci had chopped the windshield, molded in the fenders front and rear nosed the hood and decked the trunk, lowered the car all around. The fender trim pieces were removed and all holes filled and at the front the parking lights were removed for a much cleaner look. Dick also molded the headlights rings to the fenders, installed 1949 Mercury taillights and modified a set of 1949 Mercury bumpers to fit the 1948 Mercury. The 1949 Mercury bumpers wrap around the fenders more than the original bumpers giving the cr a much more modern look.

The bodywork was arrow straight. it was finished in flawless black lacquer. The interior was done in red and white naugahyde with dark red carpets. The dash was chromed as were the garnish rails. The car had a perfect stance…. and the just “right look”. It had a 3/4 race Mercury 59AB flat head engine with three carburetors, a hot cam, aluminum heads, and headers. According to Jim Ron’s 1948 Mercury was an absolutely stunning car. One of Jim’s all-time favorites. Ron drove it as regular transportation for a year or two before trading it for a 1954 Ford Sunliner in late 1955. 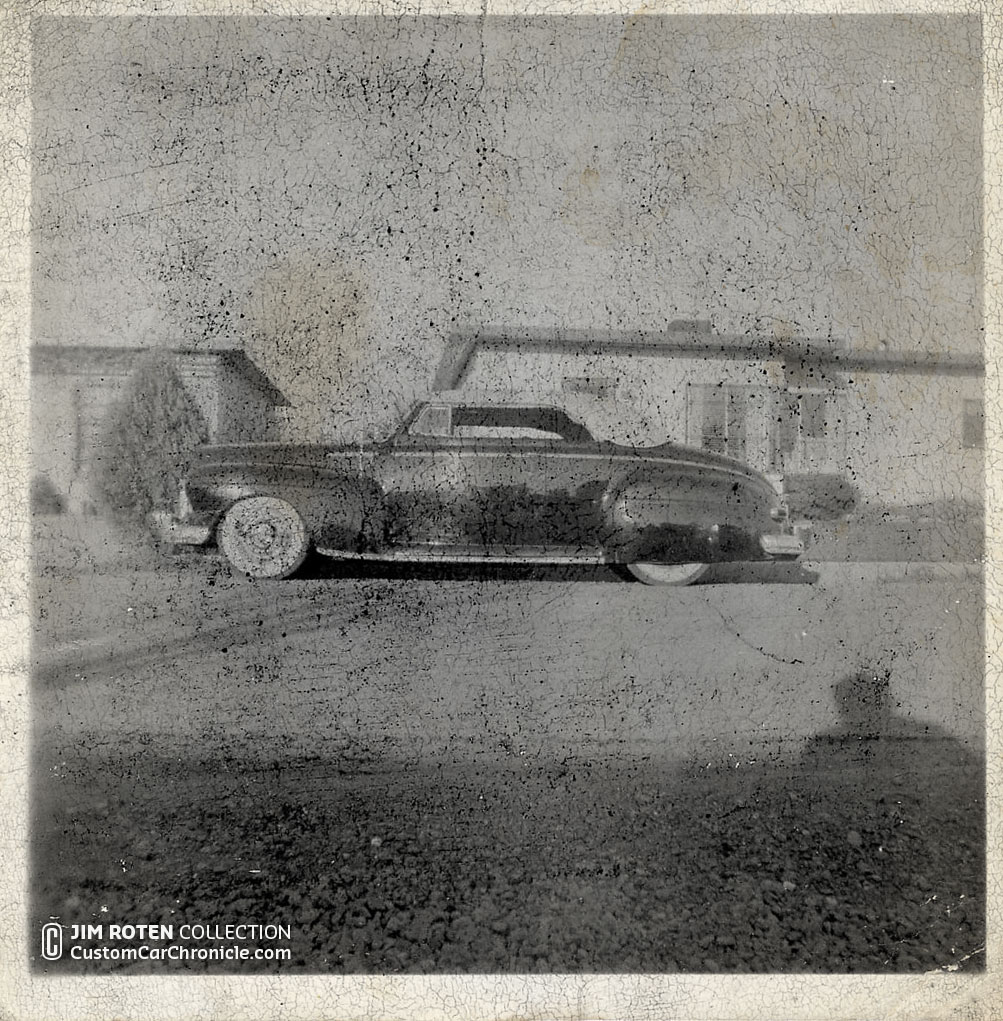 Sadly this photo is really badly weathered, but we can see the great stance of the car. The 1949 Mercury bumpers are a perfect touch for the car.
[divider]

Ron has no idea what ever happened to his 1948 Mercury, and if it has survived all these years, or is long gone. Jim Roten mentioned that Ron’s ’48 Mercury went through several owners after Ron traded it. These new owners seriously abused the car. The last time Jim saw the Mercury was in 1958. By then, the car was in a very sad state of disrepair. If you have any more info on this car, please let us know. 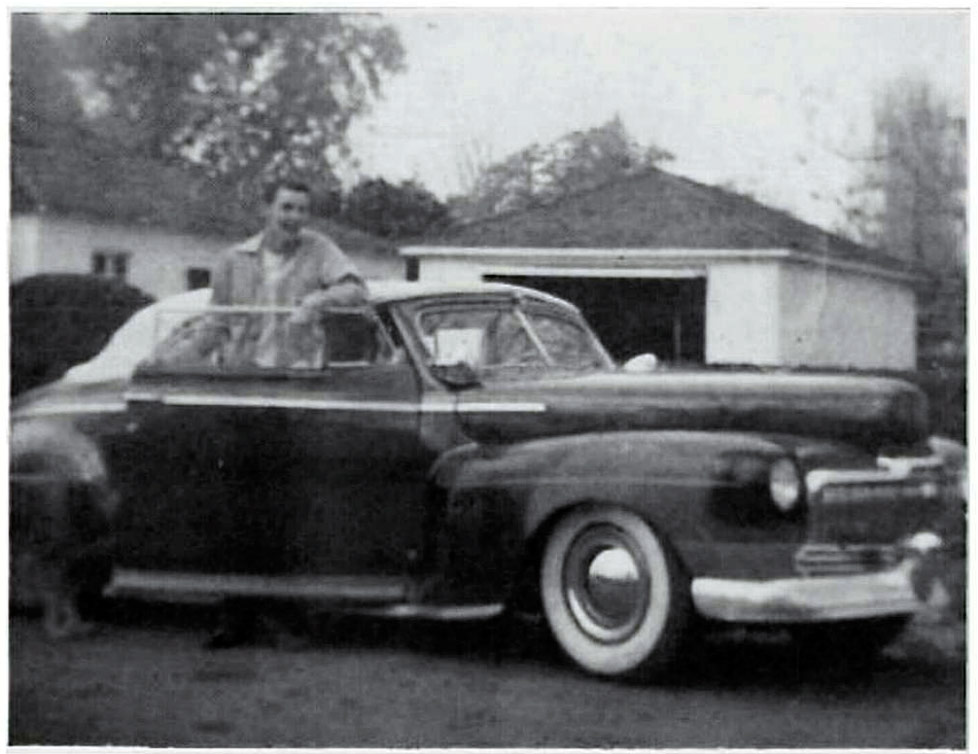 Ross has been digging thru numerous old year books and is sharing all the car pictures he can find. Some photos, and memories in those books are really amazing. He found this photo of the old Bertolucci Mercury in the 1956 Chico High yearbook. The photo caption in the year book mentioned that the new owners of the Mercury had abused the Bertolucci car and you can see that in the yearbook shot it has a primed repair spot. It surely shows the beginning of the deterioration. Sad… Hopefully it surveilled. (Thanks for digging these up and sharing them Ross.)
[divider] 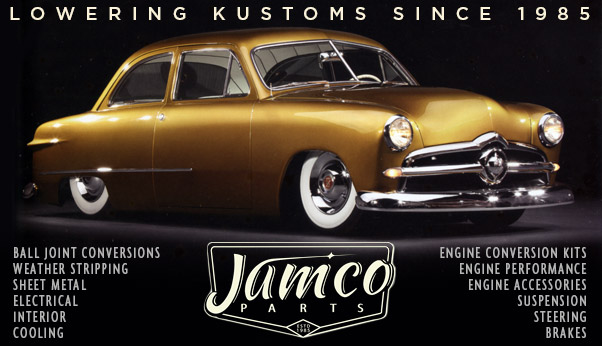 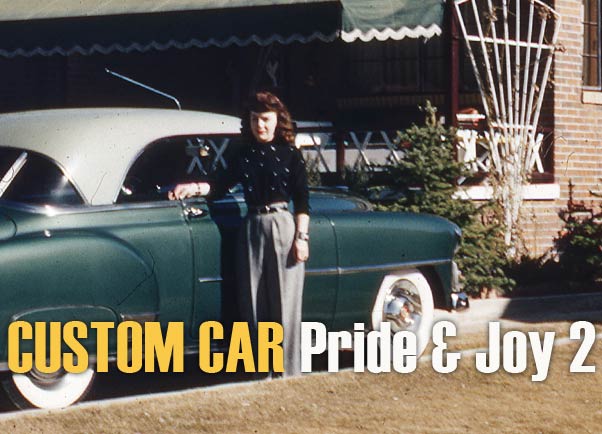 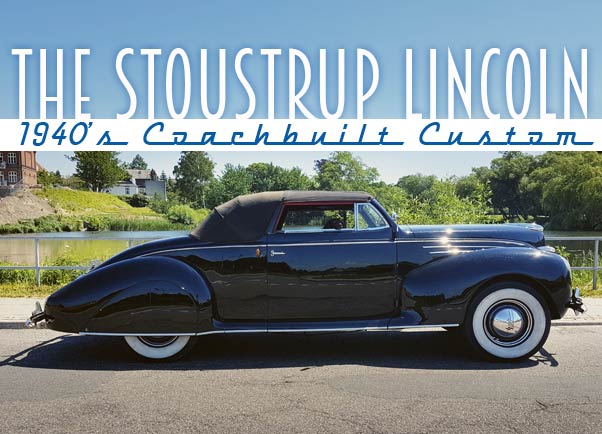