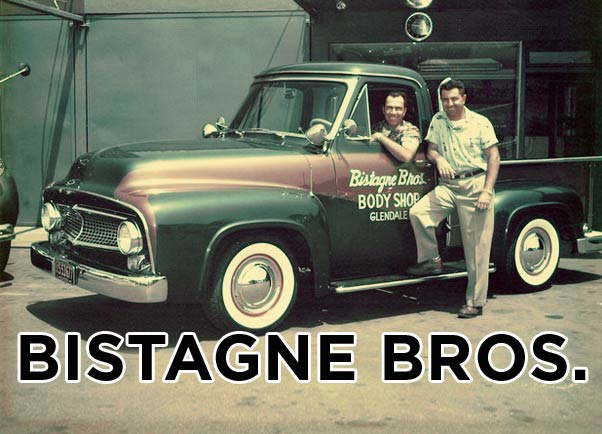 Brothers George and Tom Bistagne operated Bistagne Bros Custom Auto Body in Glendale Ca from 1946. It is of those shops that shaped the history of the Custom Car.

The Bistagne Brothers, from Glendale California, Tom and George are probably best known to the Custom Car enthusiastic crowd for George Bistagne’s 1938 Ford DeLuxe convertible sedan. Two photos of this car have been featured in several publications, including Pat Ganahl’s The American Custom Car book. The beautiful car was build by George in 1940, and must have for sure influence a lot of young guys in the Glendale area.

After returning from their WWII military service the two brothers decided to start their own Custom Auto body shop. They found a suitable location on the northeast corner of Chevy Chase and Verdugo in Glendale, Ca. In this small 400 square foot George and Tom started creating Customs and doing general body repair work. In the next two years they much have created a good number of cars for an increasing number of clients, because the shop had become to small. In 1948 the two brothers were able to buy a piece of property on the southeast corner of the same intersection. Here they build an all new much larger shop with distinctive corner signage. The shop would remain on this 1400 E Chevy Chase Dr, Glendale California location, and is till in operation there today, and is even still Bistagne family operated.

George Bistagne bought his 1938 Ford DeLuxe convertible sedan in 1940. He then took it to Roy Hagy’s shop in Hollywood where George Bistagne was able to work on the car himself using the shops tools. George chopped the windshield 2 3/4 inches, removed the running boards, created covers to hide the frame where once the running boards had covered the frame. He reworked the bottom of the fenders and installed stainless rock shields on the back. He modified the hood sides by removing the top grille section and filling it in with sheet metal, he also filled in the hood side louvres for an even smoother look. At the back he also created a set-in license plate with the plate mounted behind glass low in the trunk. The stock bumpers were replaced by two 1937 DeSoto front bumpers and he added a set of teardrop skirts. He reworked 1934 Ford cabriolet windows to fit the chopped 1938 Ford and then had the Carson Top Shop create the beautiful padded top. 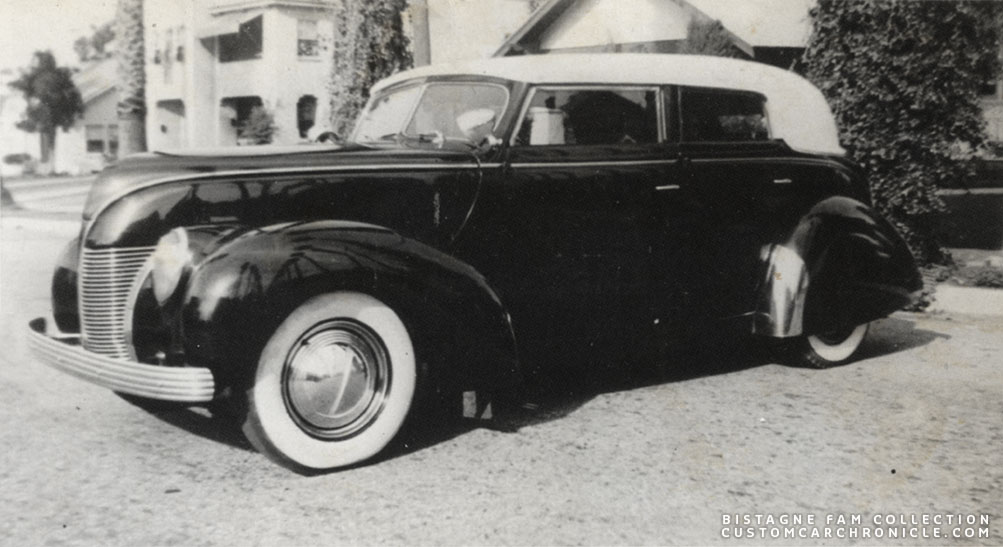 Perfectly styled and proportioned George showed with this car what he was able to do. Notice the small diameter flipper hubcaps. Possibly these are original Cadillac units.
[divider] 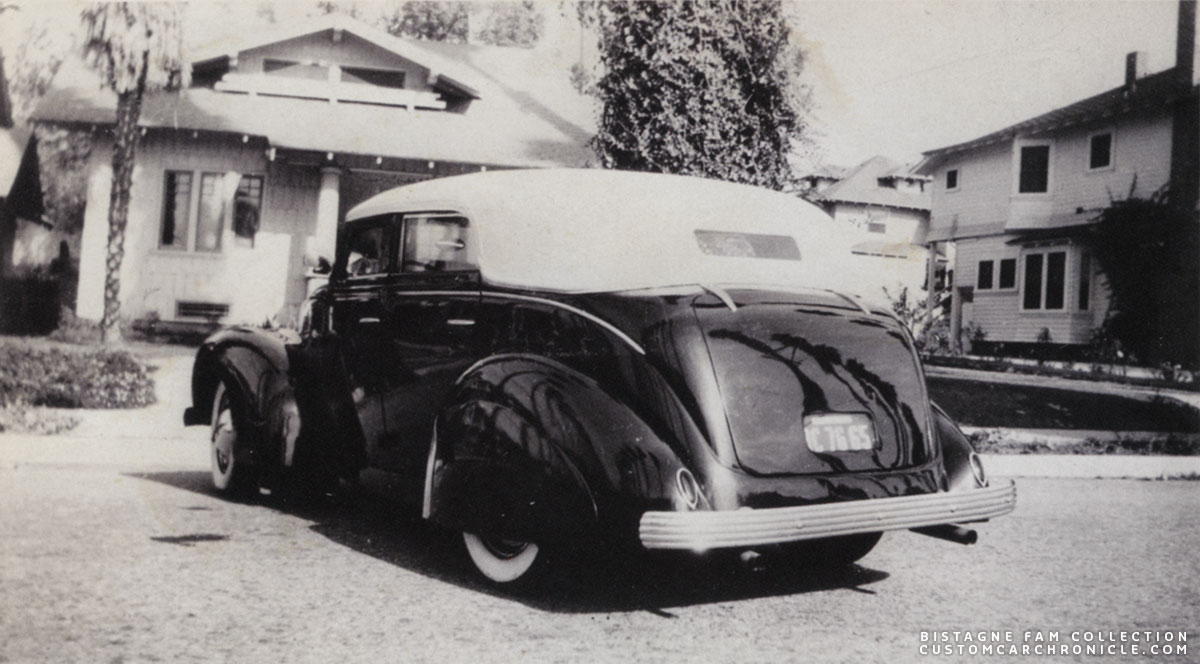 The rear view of the ’38 Ford shows the beautiful shape of the Carson top, the set in license plate and the great overall appearance of the car.
[divider] 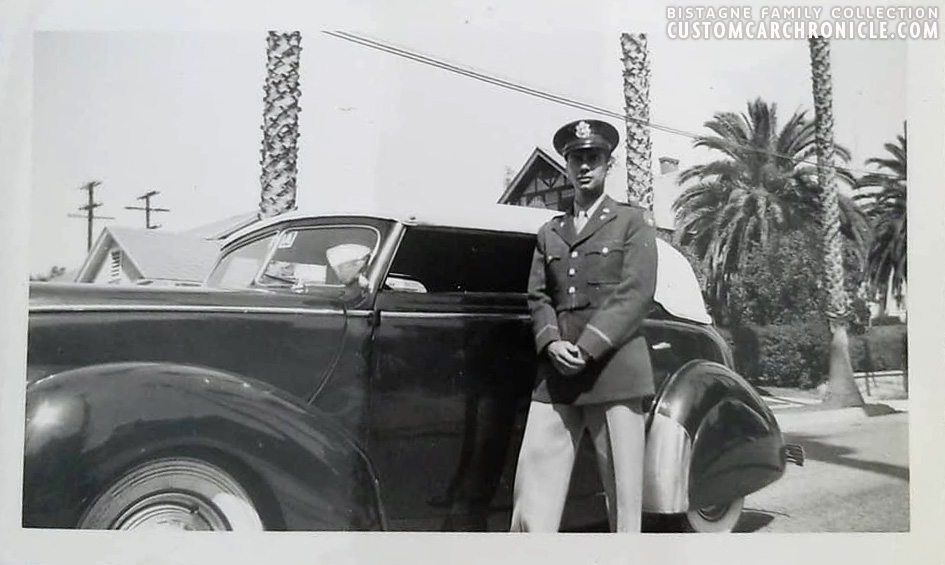 George painted the car in ‘41 Buick maroon metallic, added Appleton spots and lowered the car slightly adding wide white walls with beauty rings and small diameter single bar flipper hubcaps. The end result was an really stunning looking custom that must have turned a lot of heads back in the 1940’s. The style and quality of the build most likely helped him and his brother Tom to get started with the body shop in 1948.

George Sold the car in 1948 to Rudy Vasquez in Glendale. Don Gaide (one of the founding mebers of the Road Kings Car Club) owned the car in the late 1950’s early 1960’s and George Bistagne still knew where the car was in the 1980’s, but has lost track of the car after that. Hopefully this beautiful early custom is still around hiding in somebody’s garage. If you know anything about this car from the last decade or so… please let us know, we would love to hear it.

The first shop where George and Top started to create Custom Car for a living was a small 400 square feet shop. They created cars in this shop for two years and as we can see in the photo below they already started to need employees, or at least helpers to get all the customer cars done. 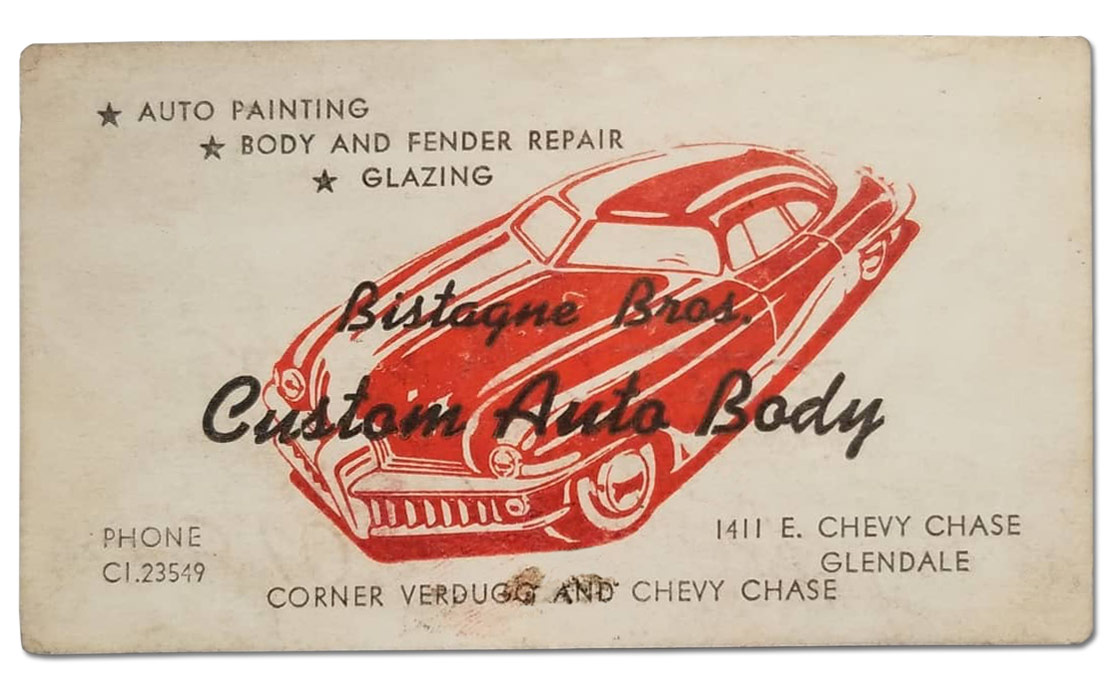 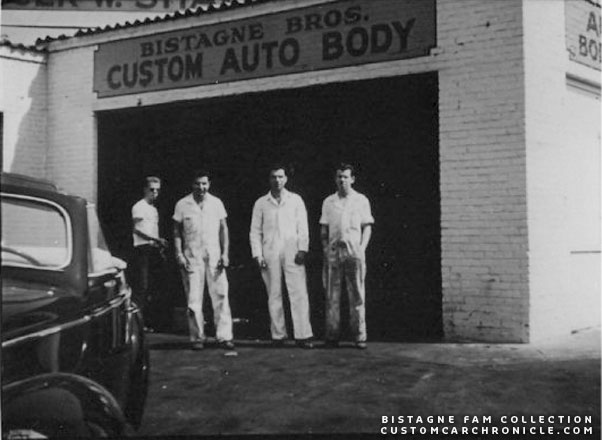 These two photos show the early stage of the 1940 Mercury. It was mildly restyled at this stage with 1946 Mercury bumpers, set in license plate and removed handles and emblems on the hood and trunk.
[divider] 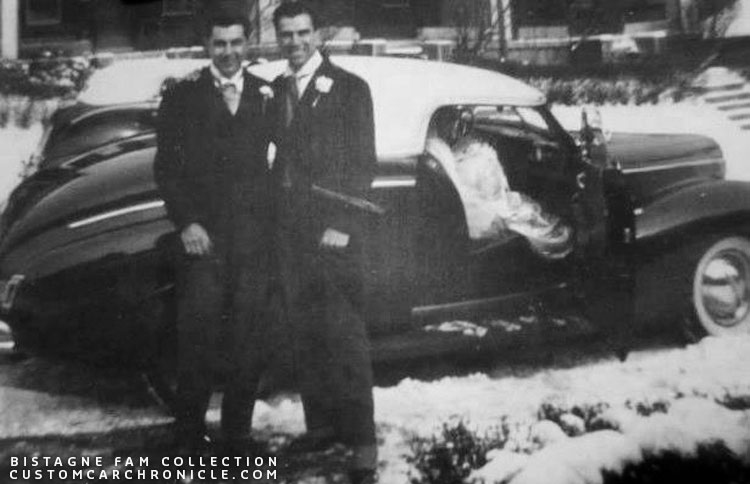 Some time later the brothers chopped the windshield and the Carson Top Shop created the padded top for it. In the back of this small fuzzy snapshot we can see the back portion of George his 1938 Ford.
[divider] 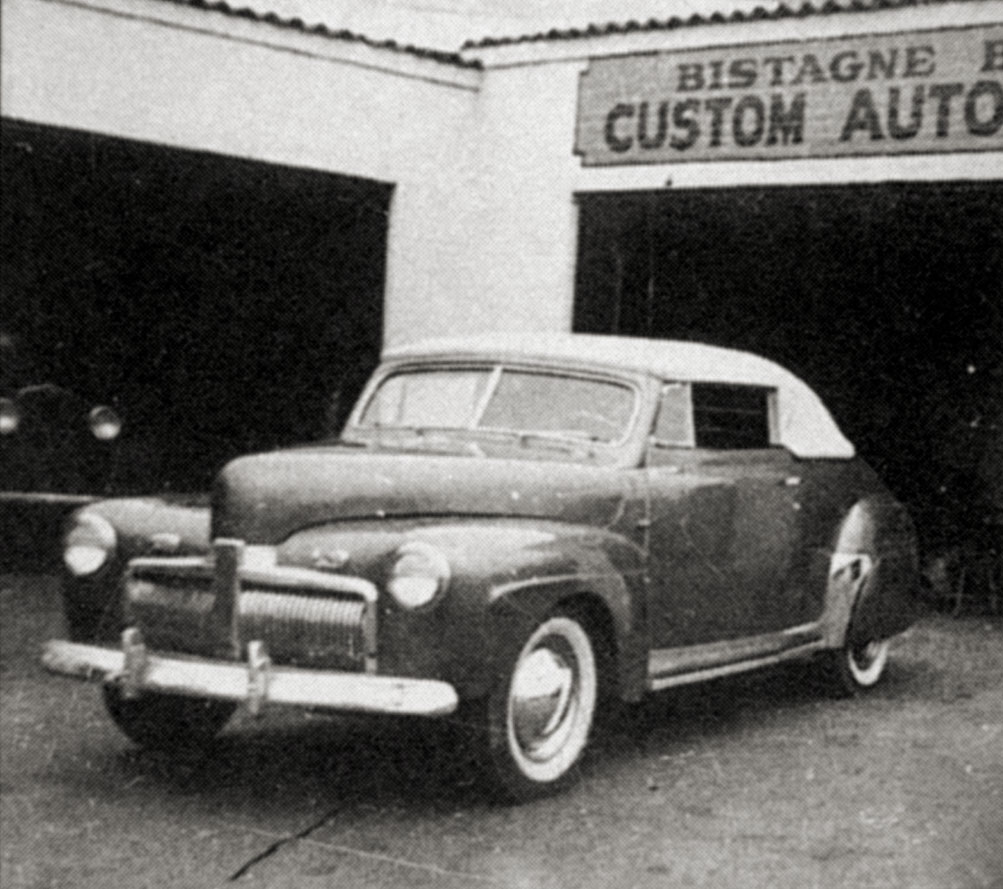 Conservative restyling on this very rare 1942 Ford convertible. The brothers chopped the windshield, slightly lowered the suspension, nosed the hood, removed the side trim and added chrome rock shields on the skirted rear fenders. The Carson Top shop did the padded top.
[divider] 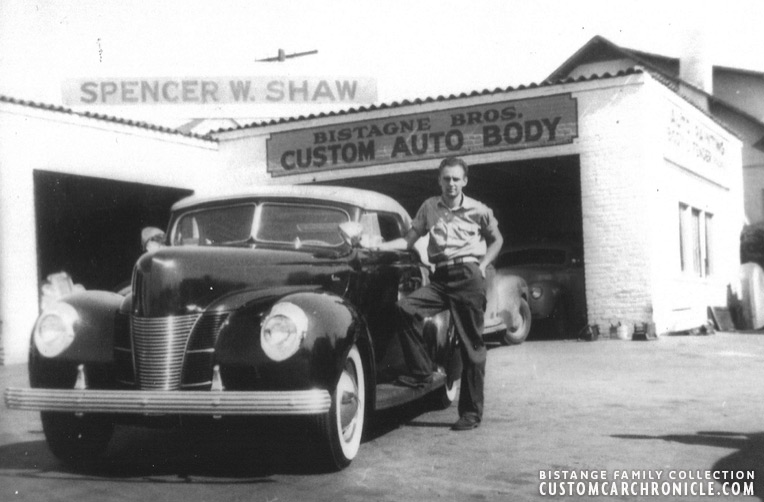 In 1948 the brothers moved into a new shop they had build on the opposite side of the shop where they started out in 1946. The new shop was a lot larger and next door was a gas-station, which also helped getting in new customers. 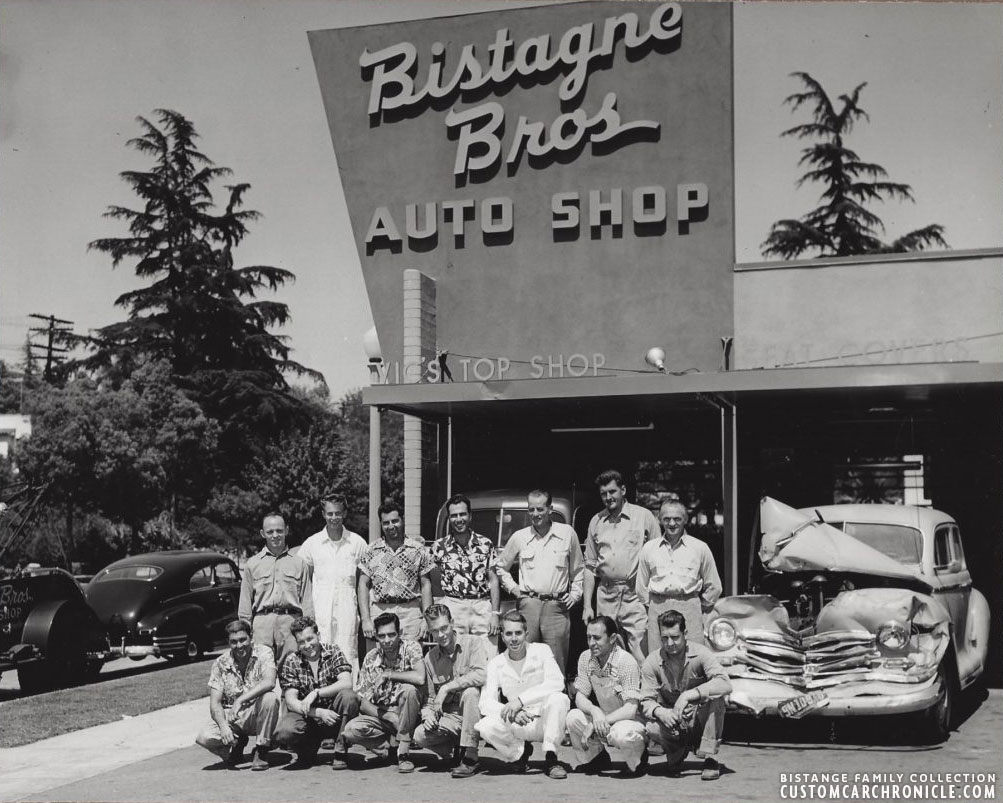 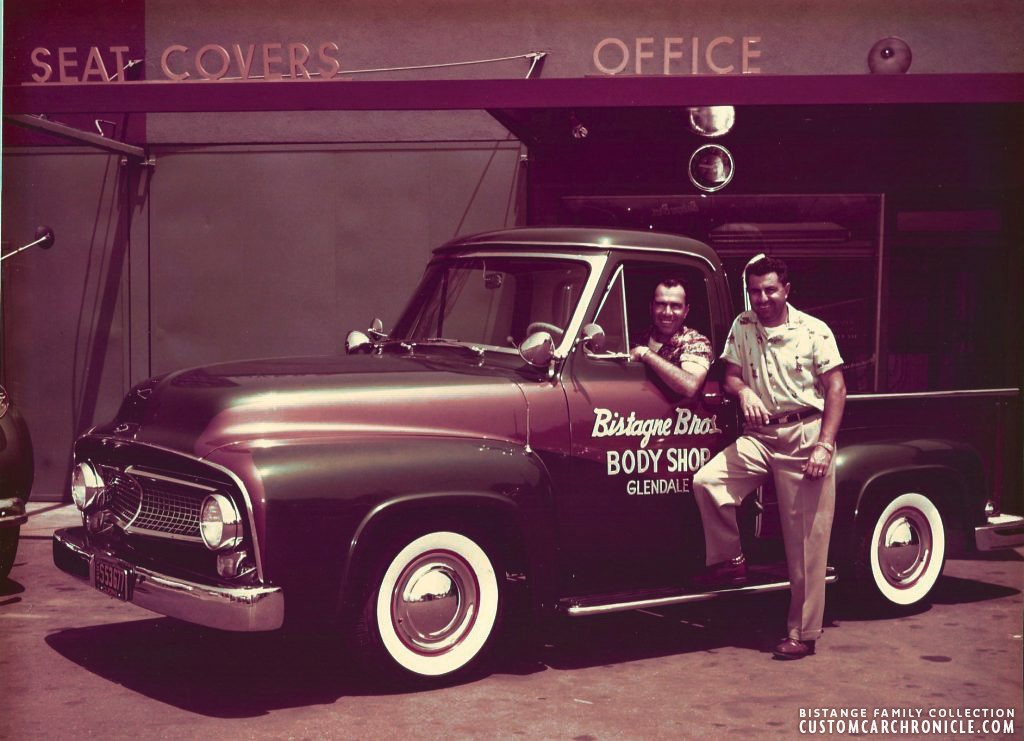 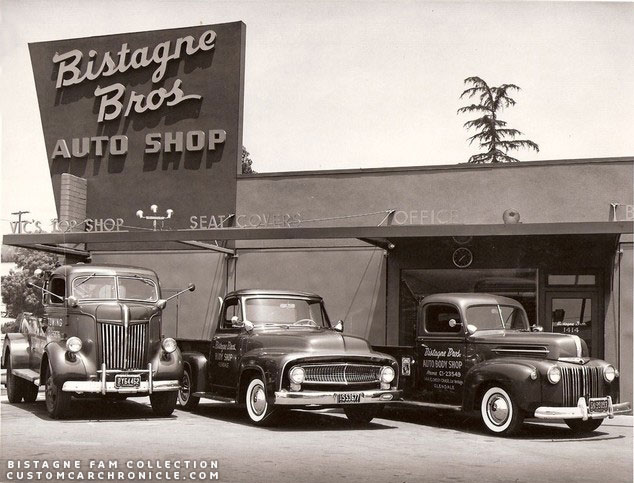 Overview photo of three shop trucks parked in front of the Bistagne Bros Auto Shop building. Notice how two of the truck were updated with 1946-48 Mercury bumpers, and all three trucks had Appleton spots.
[divider] 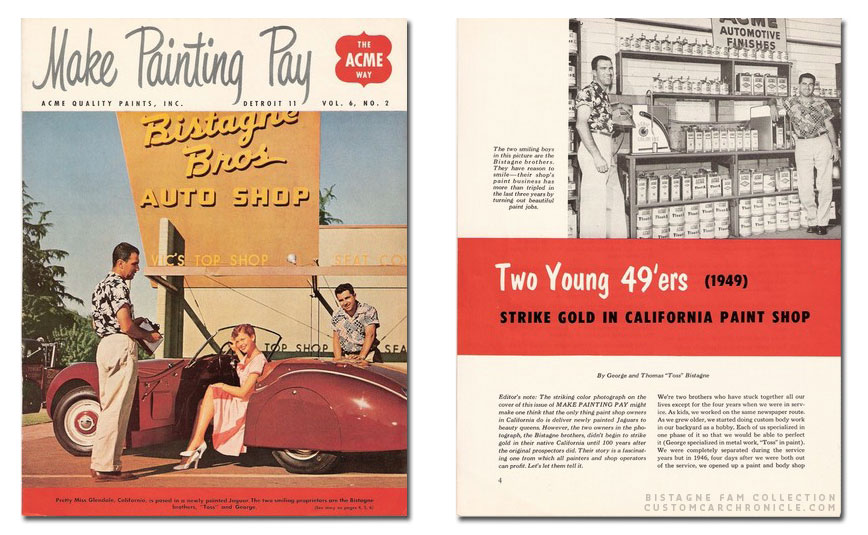 One of the Bistagne Bros shop specialities was painting cars. In 1949 the Bistagne shop was highlighted, including a cover image in the ACME Quality Paints Inc magazine.
[divider] 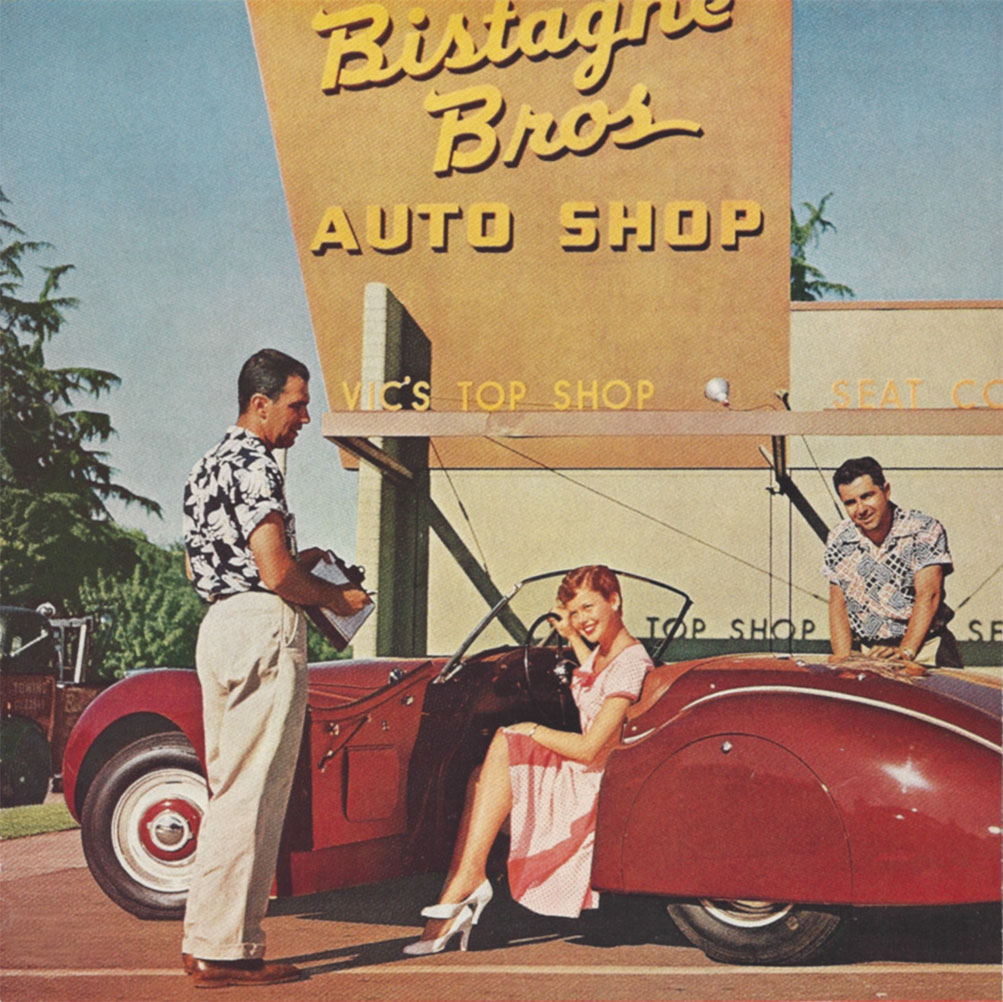 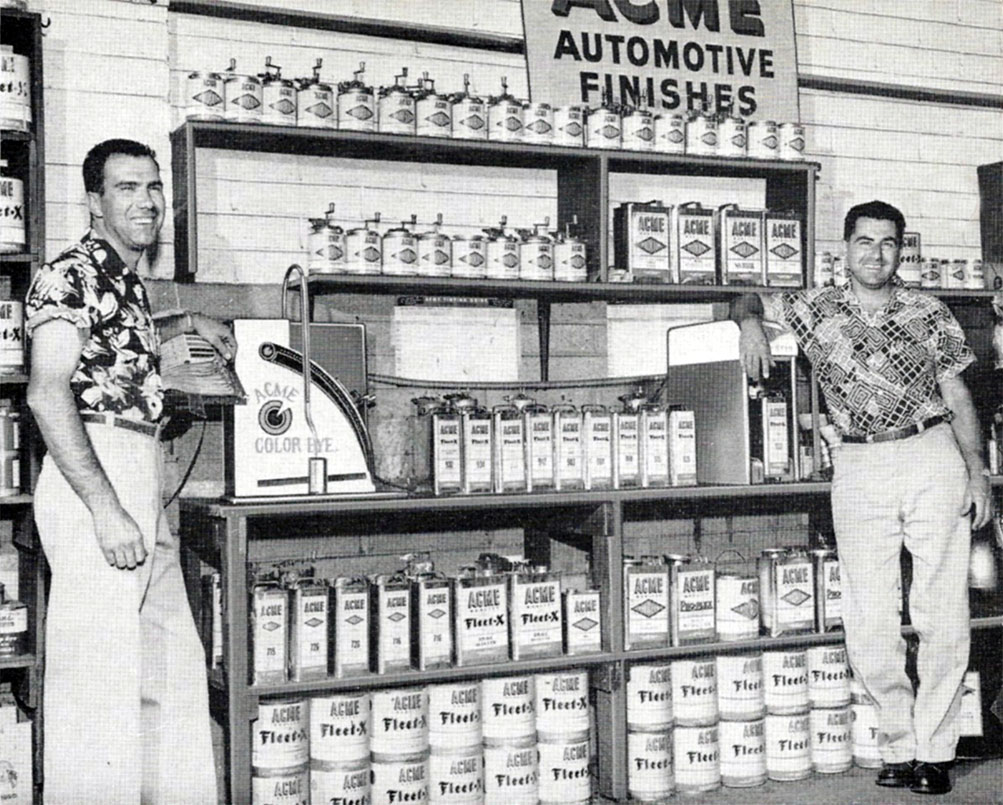 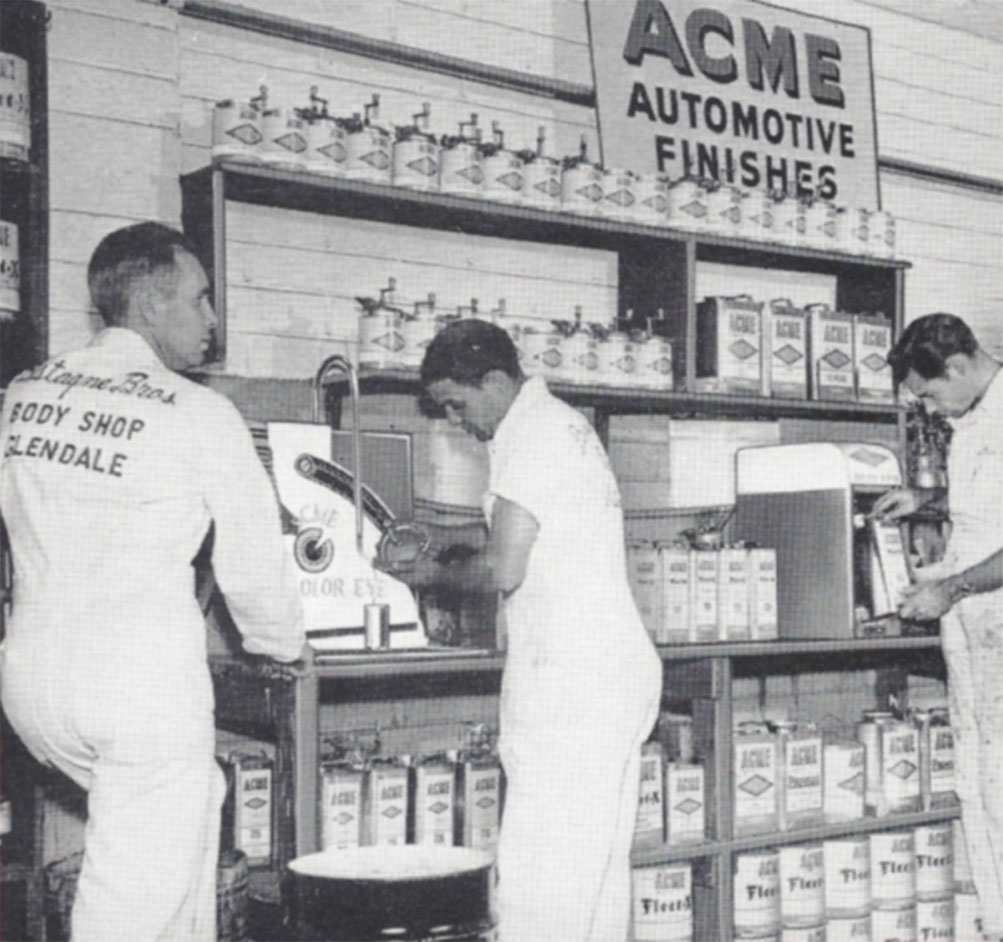 In the 1970’s two sons of Tom Bistagne joined the shop and by then most of the work done in the shop was high end automotive repair. In 1999, the adjacent gas station was purchased the shop was expanded to 27,000 foot lot with 12,500 feet of working area and plenty of open air space and parking. The shop area now utilizes the latest technology and equipment to carry out state of the art automobile repairs. 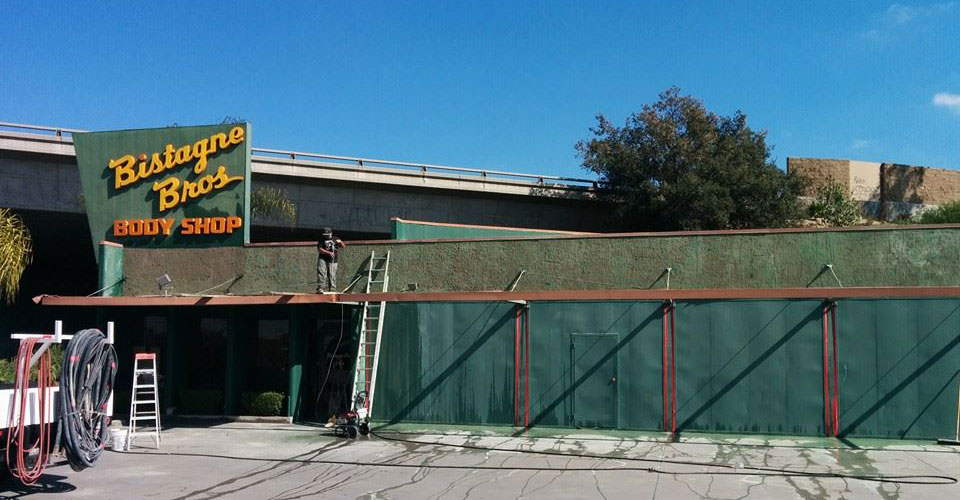 This is how the Bistagne Bros Body Shop looked like in 2015. In the picture they were cleaning the shop wall in preperation for a new green color coat.
[divider]

We hope to be able to bring you more on the Bistagne Bros Custom Auto Shop in the near future. We know they have created a great number of customs in the 1940’s and 1950’s. But for unknown reasons they have never received much write ups in the magazines and books back then, nor now. If any of the CCC-Readers has any information about the Bistagne Bros created Custom Cars, or has any stories about Tom and George Bistagne, please email Rik Hoving , we would love to share it here in the CCC. 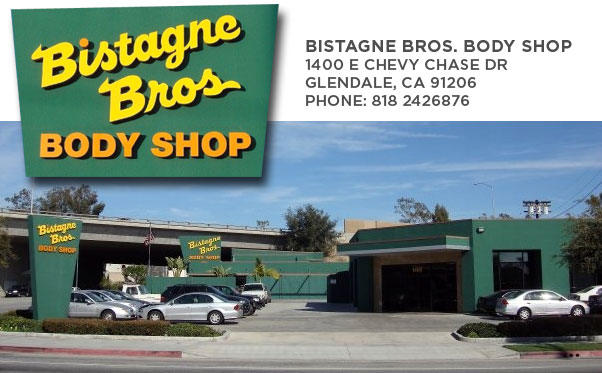 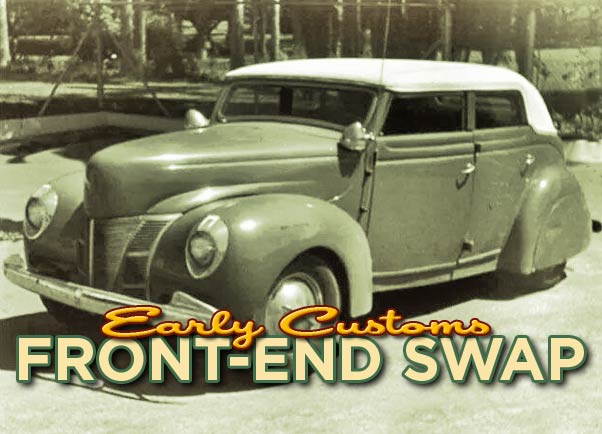 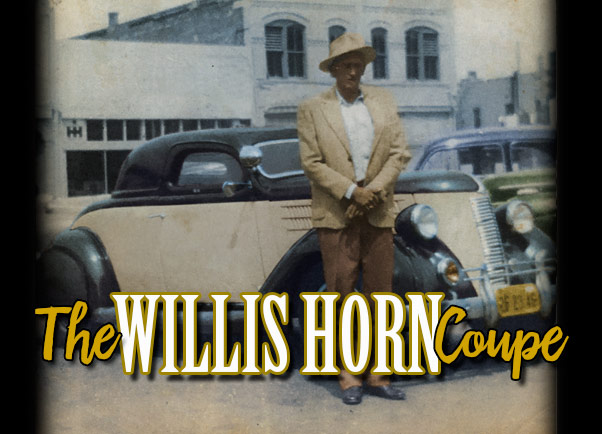 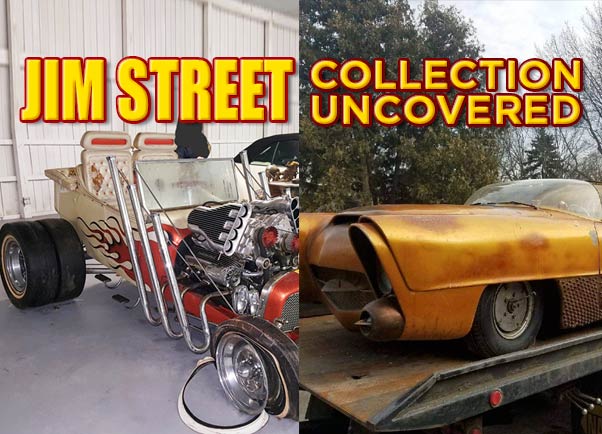