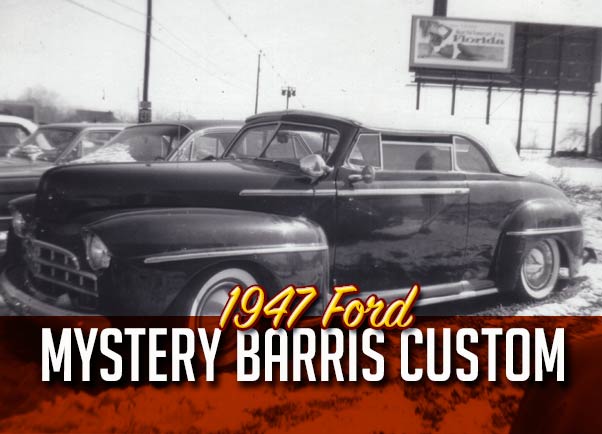 Nick Maneri from New Jersey was the owner of this 1947 Ford Custom for three years. The car was last seen in 1978. He would love to find out where it is today.

Nick Maneri from Norther New Jersey owned this 1947 Ford Custom from around 1966 till 1969. At the time custom cars like this were pretty much out of style in Northern New Jersey, or anywhere else for that matter. Most guys were in to the muscle cars, but Nick liked the custom and bought it. At the time he bought it it came with the information that it was originally from California and that the Barris Shop had something to do with it. It was not known how and when the car had gotten to New Jersey. Nick has been looking for the car’s whereabouts for years, and still hopes that the car is still around today. Perhaps hidden in a garage, or redone as Hot Rod/Street Rod.

When Nick’s son Nick (Jr) contacted me many years ago and send some photos of his fathers car with the question if I had seen it before… There was a  pictured in one of the Don Montgomery books. And even better it came with a little bit more information. The car was owned by Clyde Bengiola from New Jersey, and he had bought it as a damaged car, and that it was painted blue. In the book he mentioned that the car was originally built by Barris and had been shown in New York in 1951. No previous owners name was given. But there now was a little bit more information. When Clyde owned the car the car was still wearing fender skirts. Nick bought the car from Clyde in 1966. 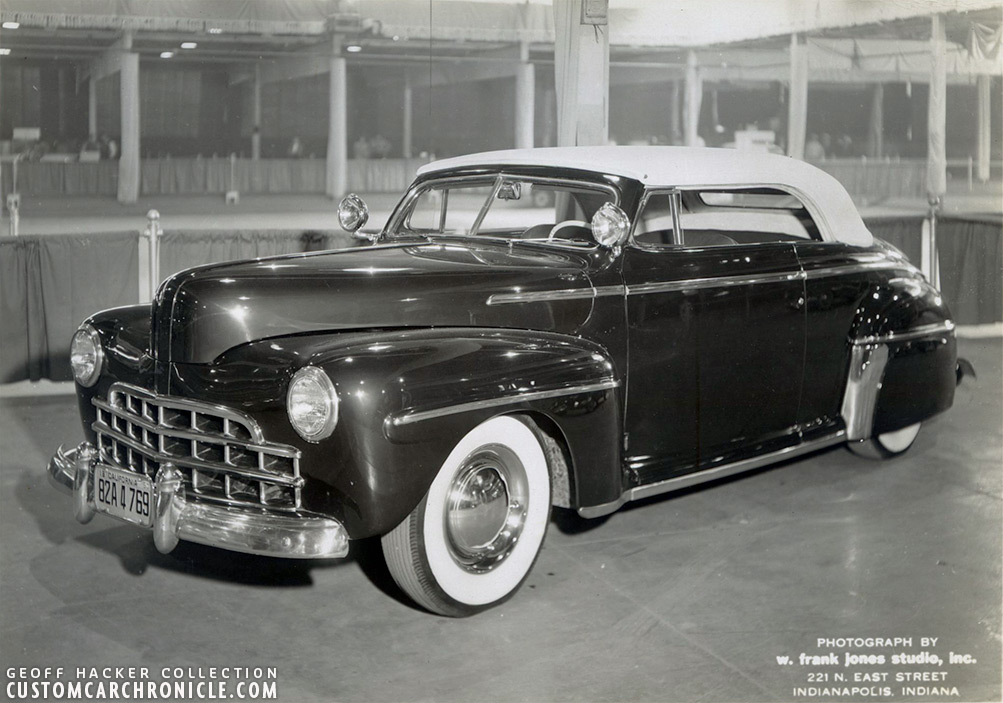 This is, so far, the earliest photo we have of the car. Taken at the 1951 Indianapolis Custom Auto Show. The car still has California plates on it (1950 tag). A stunning looking custom that looks like it was done around 1948-49 at the Barris Shop. We hope to be able to find more photos of this car when it was still in California, and hope to be able to find info on the original owner who had the Barris Brothers restyle the car.
[divider] 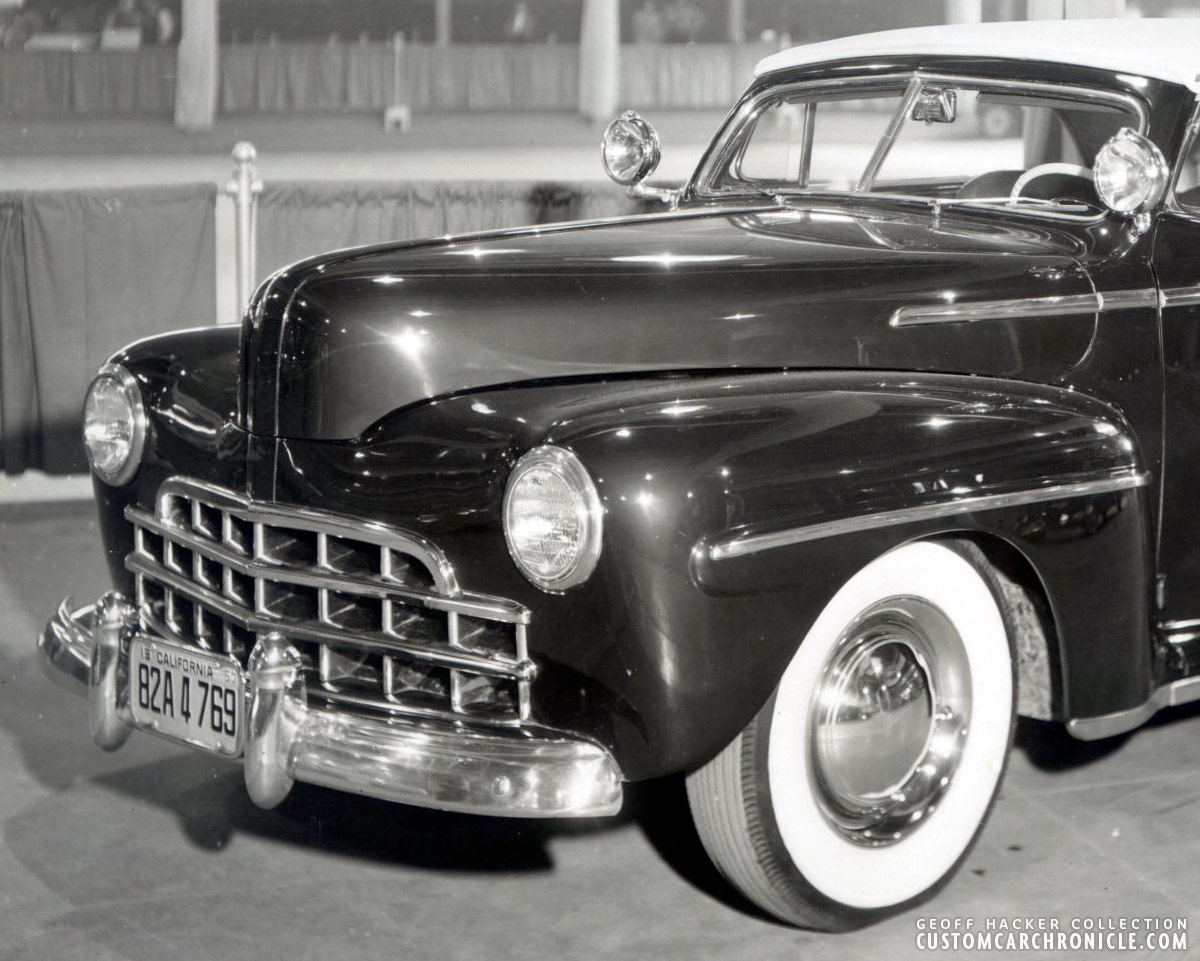 Later we came across a color photo of the car on the cover of an 1953 Motorsport magazine, which proofed that the car had been blue before, as stated by Clyde. When I had the photos Nick had supplied on my website Custom Car enthusiast Barry Mazza recognized the photos from a car he saw several times on some of his road trips. The first time he saw it the car was owned by Clyde Bengiola and he saw it at the Sip and Sup on rt 10. Clyde owned a  shop on 202. Some time later he saw it again when it was sitting at gas station in Riverdale, and once again on a used car lot in Wanaque, where he took one photo of the car. This must have been in the mid 1970’s. And the last time he saw it at a Gas station in Hacketstown while on his way to Pennsylvania, this was in 1978 and the car still looked good. So there is good hope the car is still around. 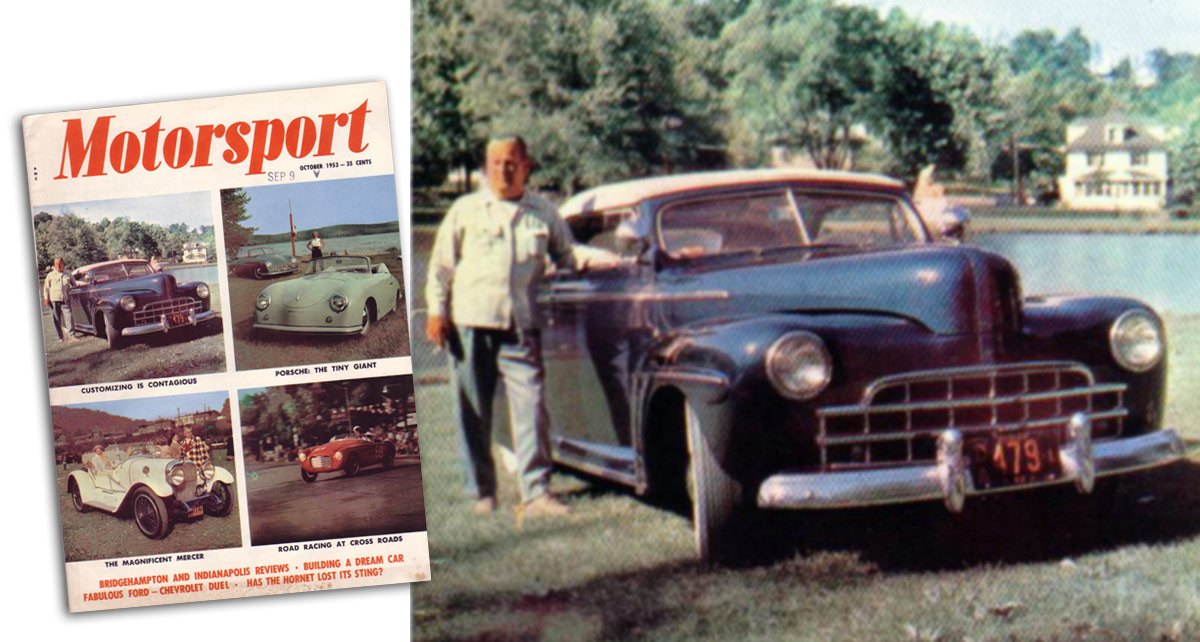 The October 1951 issue of Motorsport magazine had the ’47 Ford on the cover, in color showing the dark blue paint. These photos are most likely taken before the then owner was involved in an accident with the car. Bob Laurie was listed as the owner of the car.
[divider] 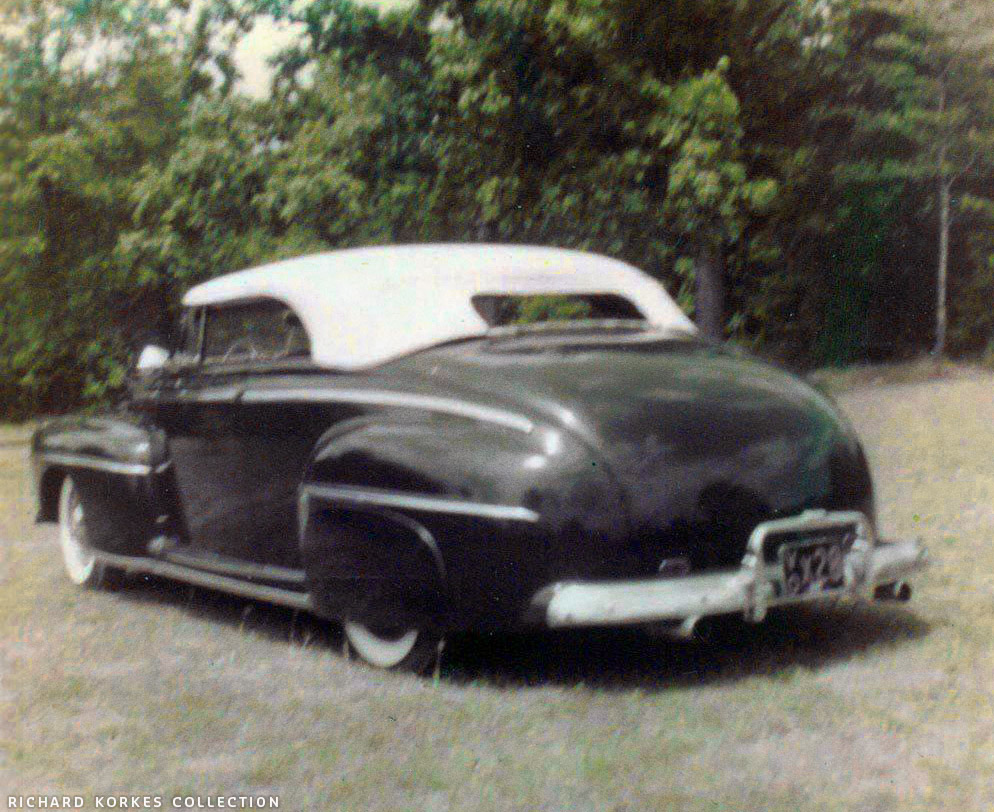 Photo shared on facebook by kustomrama was labeled as ’47 Mercury, but most likely this is the same car, a ’47 Ford and Richard Korkes had repaired the damage car for new owner Clyde Bengiola. (Note the same license plate as the photo below)
[divider] 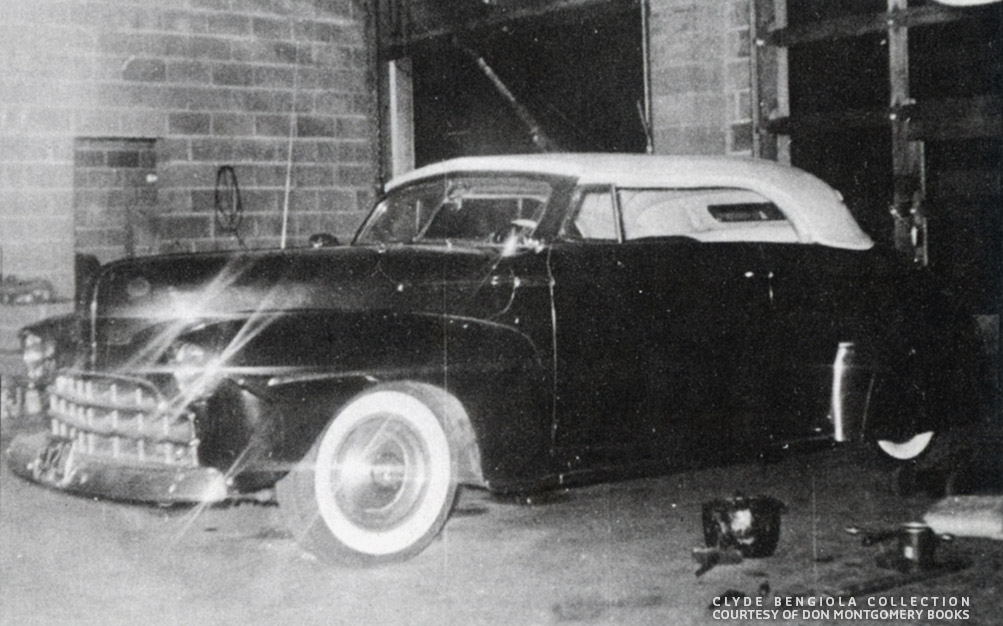 Don Montgomery included this photo of the ’47 in his Authentic Hot Rod book. Clyde Bengiola supplied the photo and the information on the ’47 Ford he owned for some time. “Clyde, from New Jersey had bought the car in damaged condition. It was a chopped padded top custom with skirts, a Cadillac grille and spotlights. It was midnight blue and had a 3/4 race flathead engine. The photo above shows the car after it was repared. Clyde also mentioned that the car was built by the Barris Bros. and was displayed in 1951 New York show. “ We can see that the car in the photo was repaired with Cadillac headlights. We cannot see if there was any rear quarter trim. Possibly the repair work was done by Richard Korkes.
[divider]

While I always keep an eye out for Lost Customs everywhere I do more research it took me many years before something new came up on the Mystery Barris ’47 Ford. My good friend Geoff Hacker had bought a wonderful photo collection with photos from the early 1950’s Indianapolis Auto Shows. And included were some really nice Custom Car photos. One of the photos, taken by the Frank Jones Studio in Indianapolis at the 1951 Indianapolis Custom Auto Show showed an early version of Nick Maneri’s 1947 Ford convertible with chopped padded top. The car still had its 1950 California license plates on the car. Sadly the photos did not come with any written information, so we still have no name of the then owner, nor any additional information of where the car came from in California. The great thing about this Indianapolis Custom Auto Show photo is that it proofs that the car originally came from California. A step closer to solve this mystery. 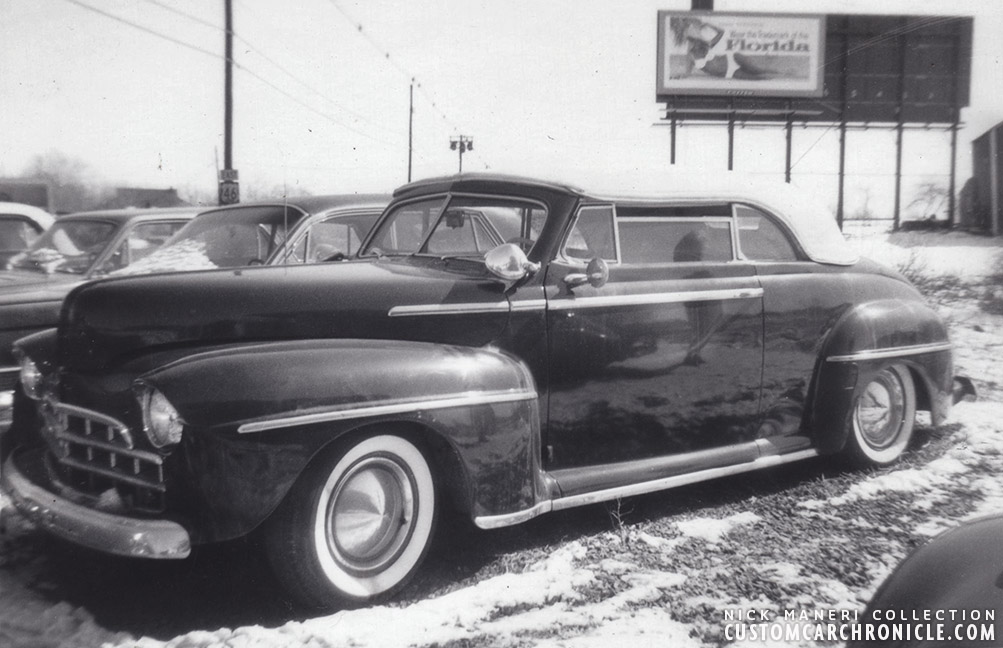 When Nick owned the car in 1966 the car had been in an accident damaging the rear. This is the reason why there is no rear quarter trim on the car. The ’54 Cadillac headlights were nicely molded into the front fenders. Not sure who did this work. Perhaps Korkes.
[divider] 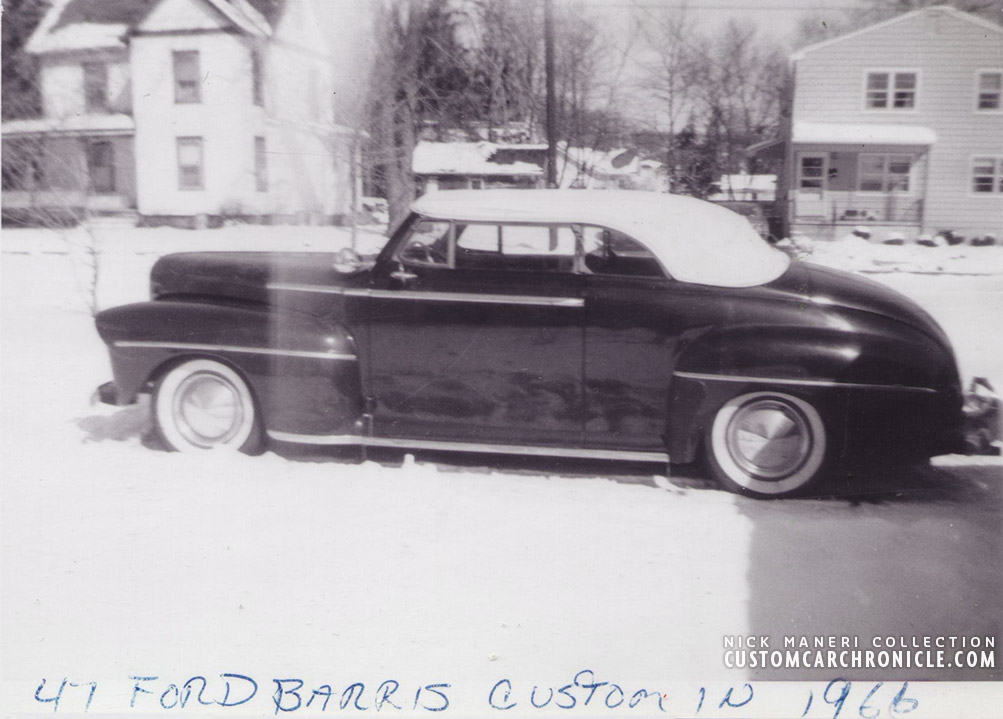 By then the car is dressed up with a set of 1957 Plymouth cone hubcaps. And the stainless rock shield on the rear fender has been replaced with an black rubber unit.
[divider]

The car has a chopped windshield and chopped padded Carson Top. Nick still has the original Hauser’s Carson Top tag, which he took out of the car before he sold it. The front end was customized with an 1948 Cadillac grille. All fender were molded to the body with a rather small radius. The taillight pods were shaved and the stock taillights were moved down and frenched into panel under the deck lid, just above the rear bumper, and closer together. On the original version as how it came to the east coast the headlights were left stock, later a set of ’54 Cadillac headlights was molded into the front fenders. Originally the car had a race flathead, but by the time Nick owned the car he replaced it with an modified dual quad 283 Chevy engine. It still had the Ford transmission and Columbia overdrive rear end. The car was painted Metallic blue when Nick sold it in 1969, and the car only had 40,000 miles on the odometer. 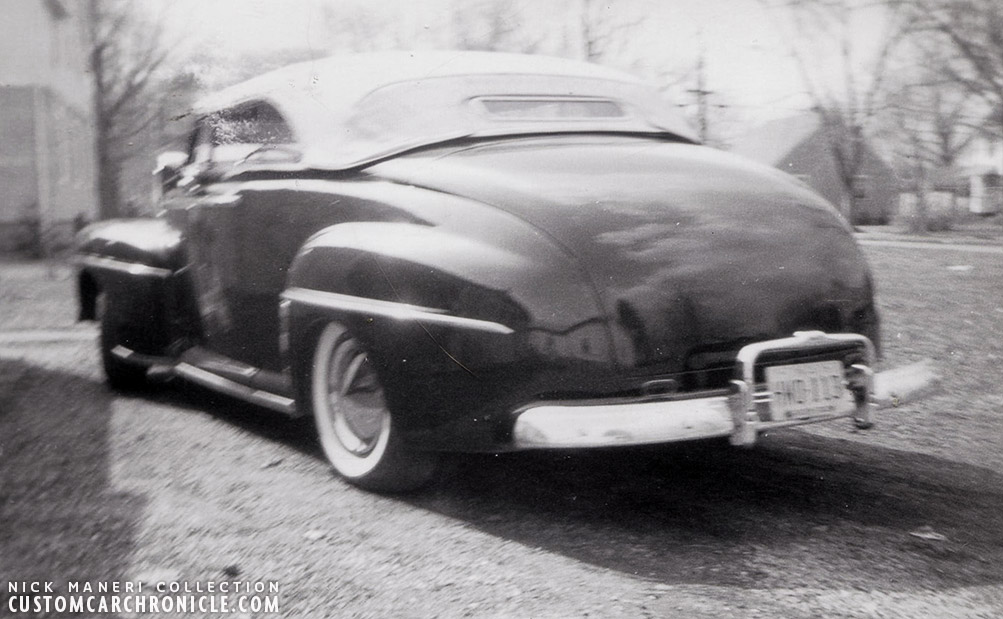 Closer look at the rear shows the stock taillights in the panel below the trunk, and the smoothed trunk, the trunk corners were not rounded.
[divider] 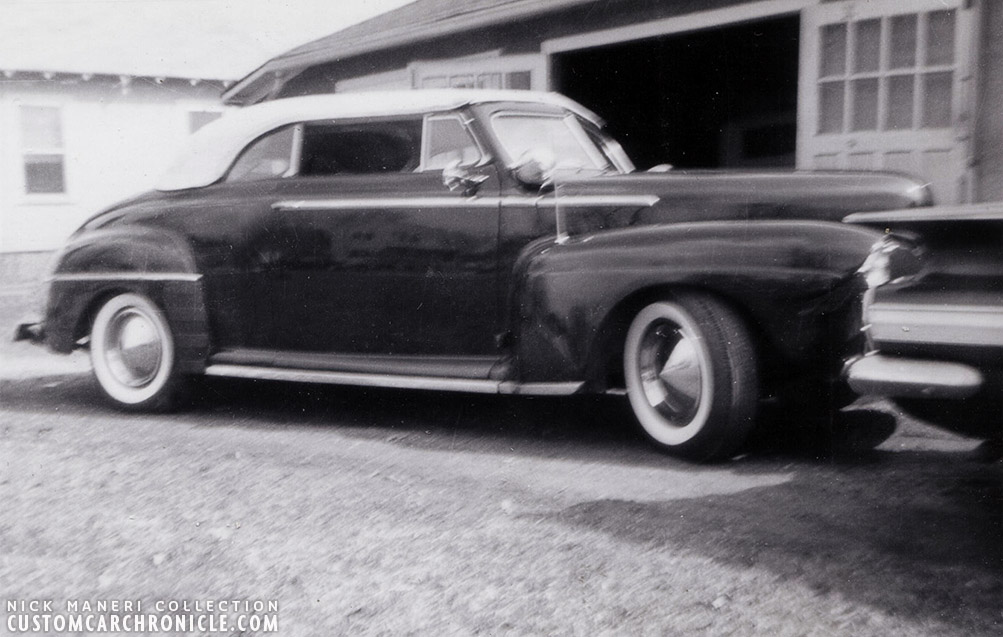 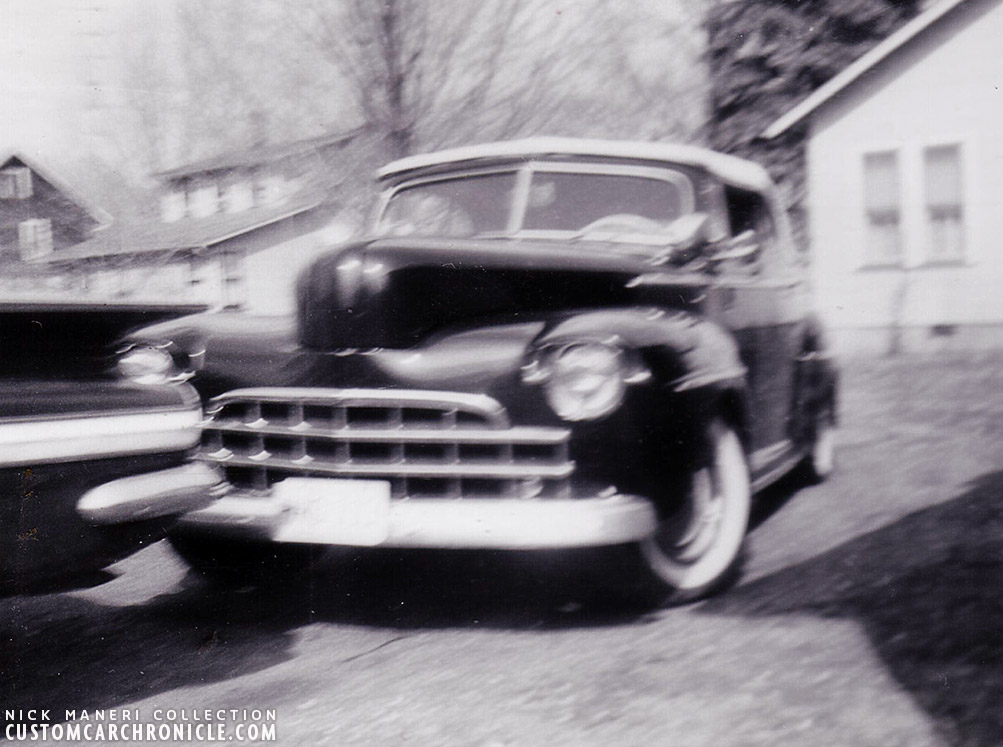 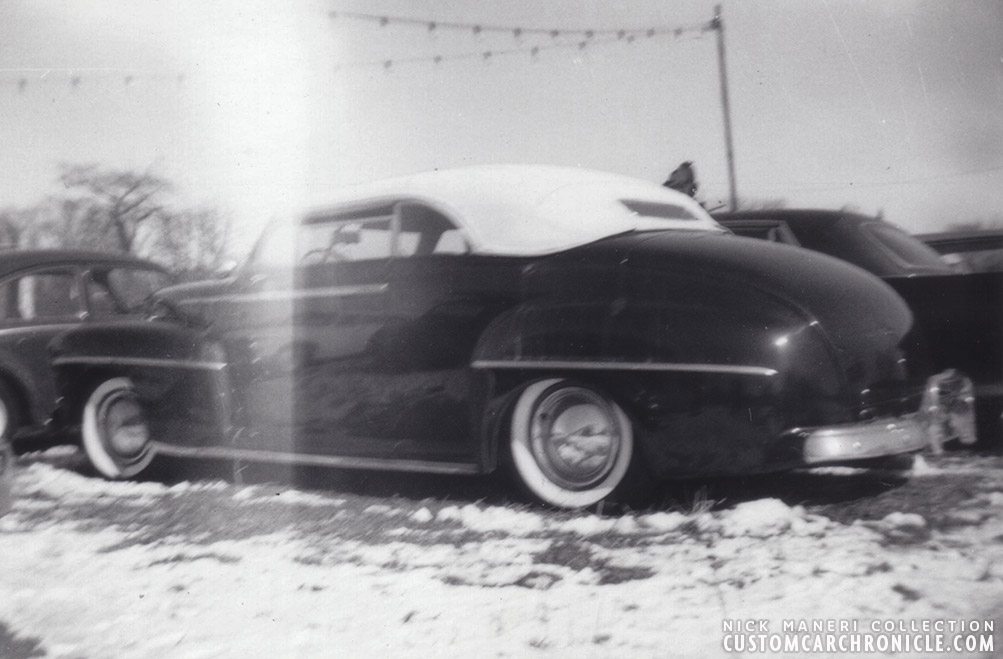 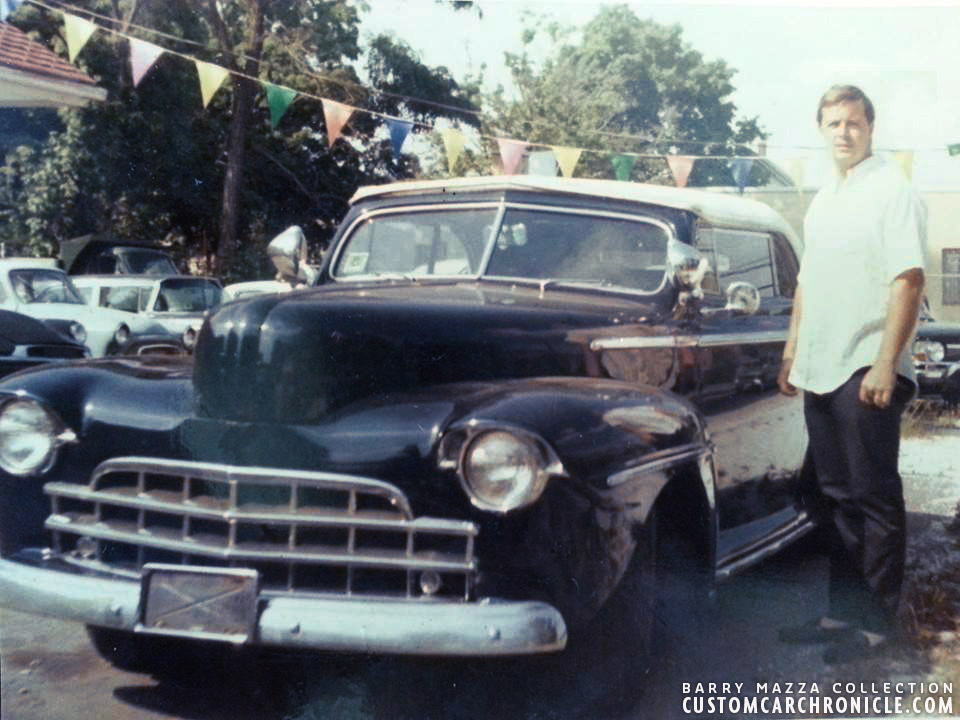 Barry Mazza took a photo of the car while it was sitting on a used car lot in Wanaque, NJ in the mid 1970’s.
[divider]

The last time Nick saw his old Ford was in 1969 when it was sitting on a used car lot in Kinnelon NJ. Nick has been looking for the car for many years now, so far no luck. But the fast that Barry Mazza still saw it in 1978 and that the car was still looking good. This gives Nick hope that the car has been saved, and is still around today.  Perhaps further customized, or perhaps hot or street rodded. Hopefully somebody will recognize the car from these photos, and if you do, please email Rik here at the Custom Car Chronicle and email, and we will pass it on to Nick. 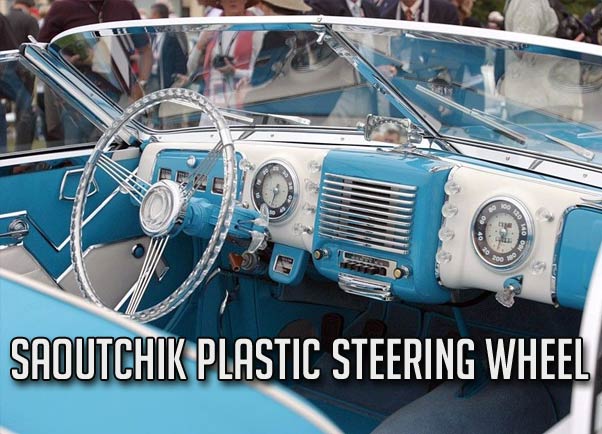 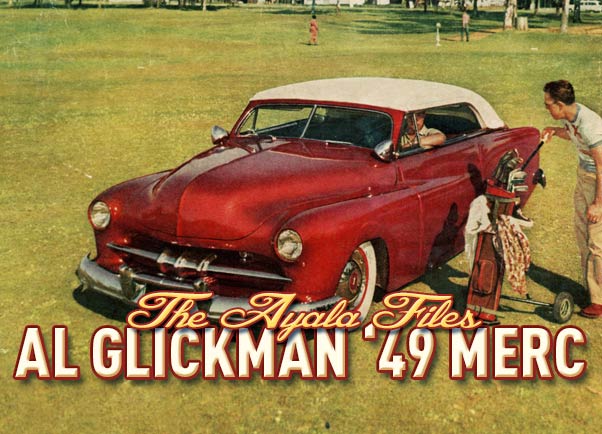 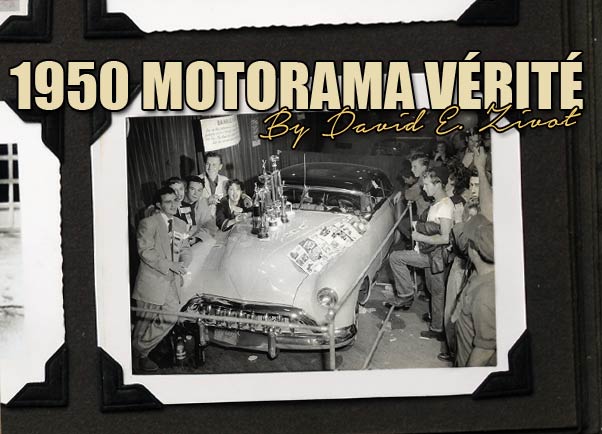