In the CCC-Series on printed material we show you here a fine selection of business cards from US custom shops in the 1950’s and 60’s.

With my background in graphic design I have always really been very interested in the old business cards from the Custom Car builders from the late 1940’s and up. The printing techniques, the typefaces, the lay-out and the special designs. They are always very neat to look at… and even better to collect.

It is really funny that when these business cards where created the shop owner would have never thougth about these items once would be collector items. They were only a means of promoting their business, or simply to give clients or posseble future clients a way to get in touch.

Some of these Business Cards are trully work of arts, they are very well designed with paper choice matching the looks the shop owner would like to display. While others were nothing more that the words in a nice letter font the printer happened to have handy at the time of the order.

In this article we are showing you a selection of some nice cards from some better know shops as well as some shop I had even never heard about… enjoy. 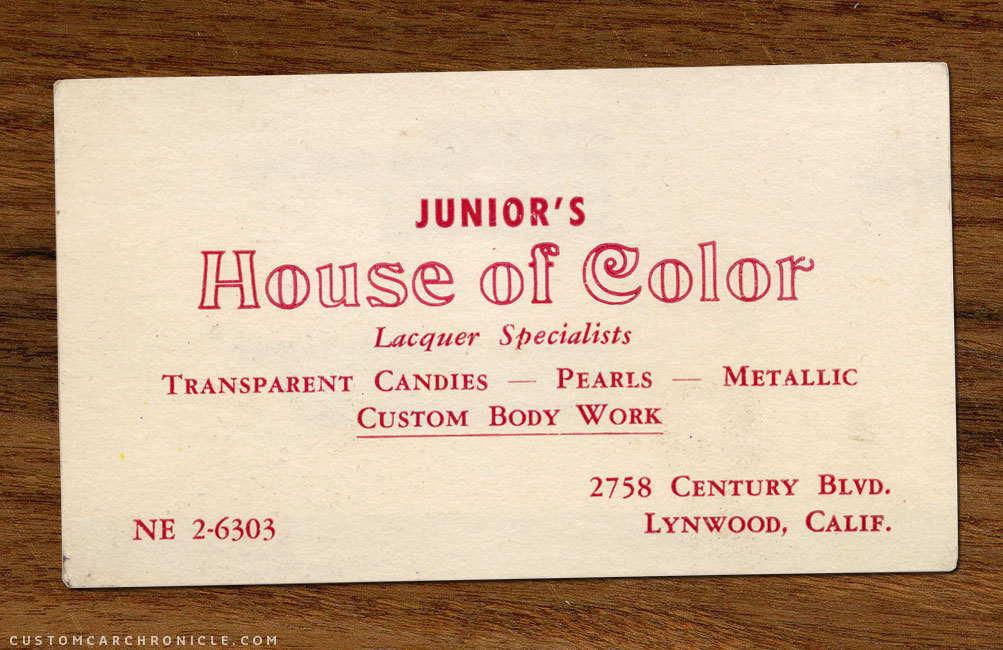 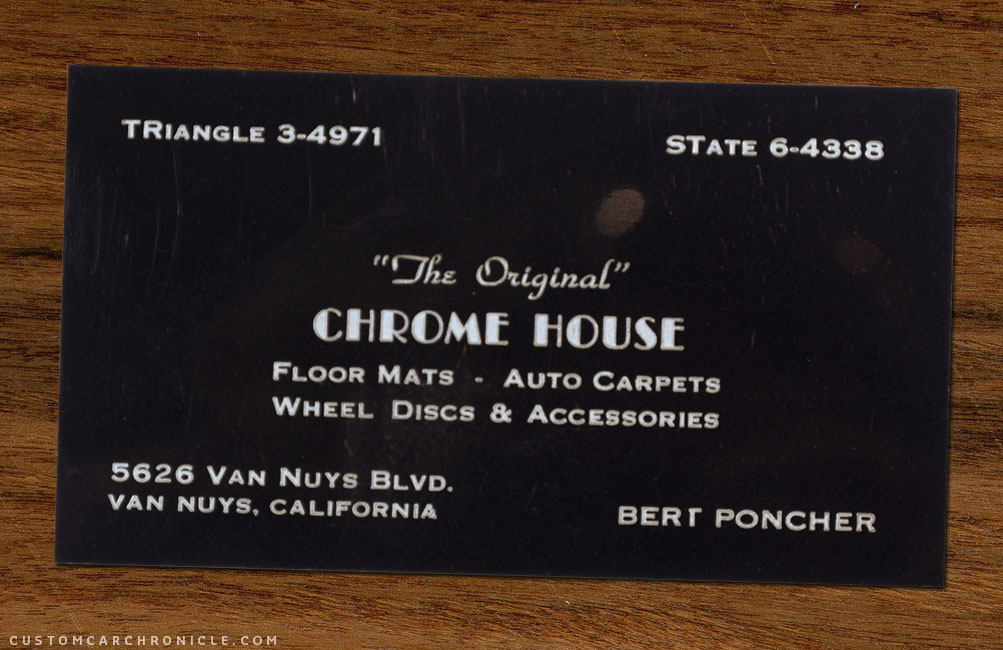 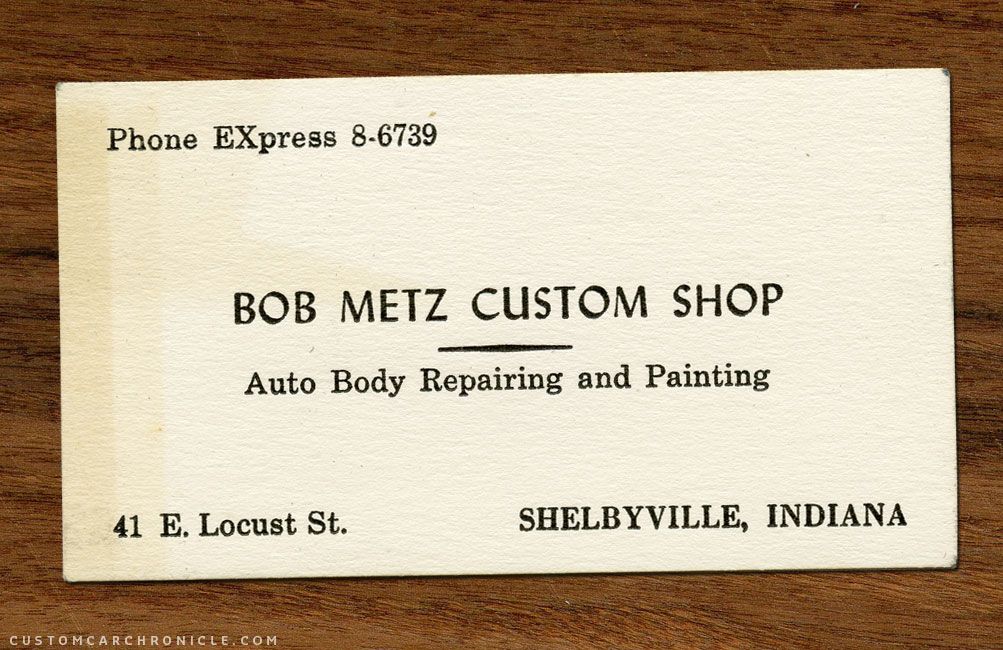 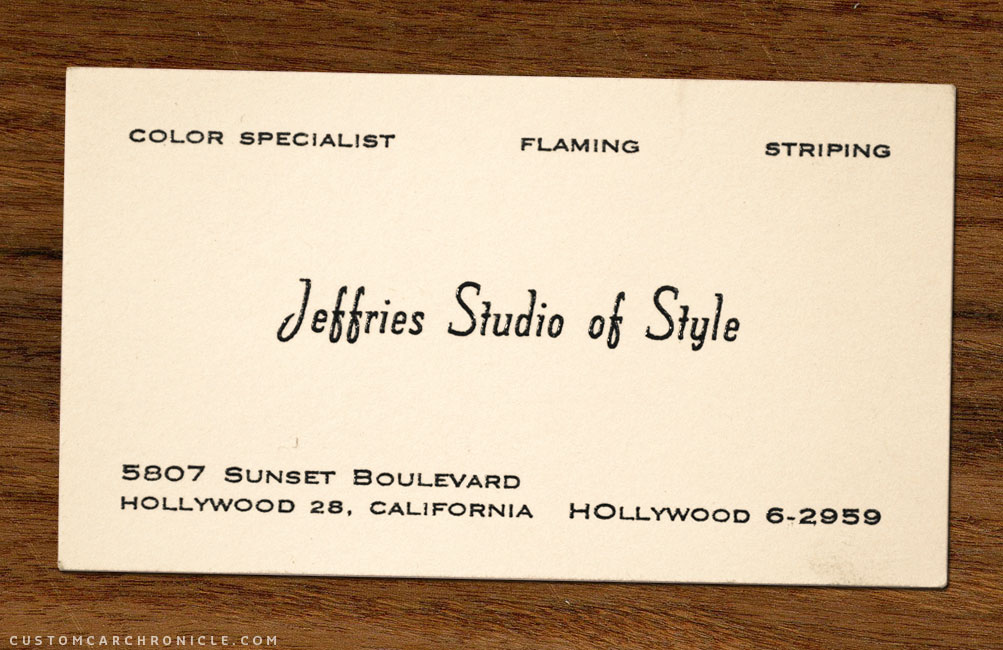 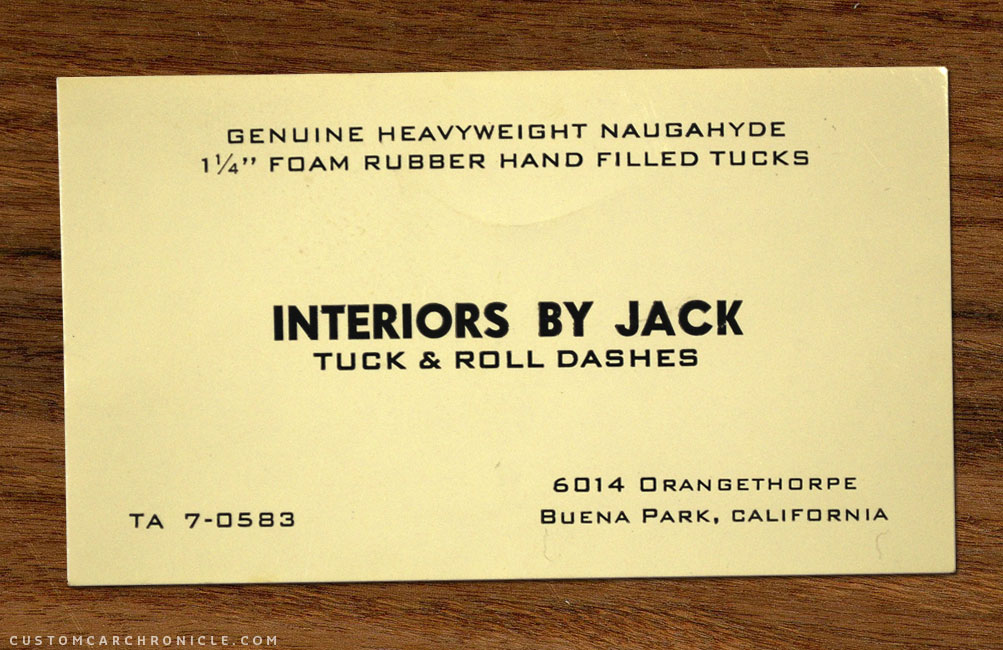 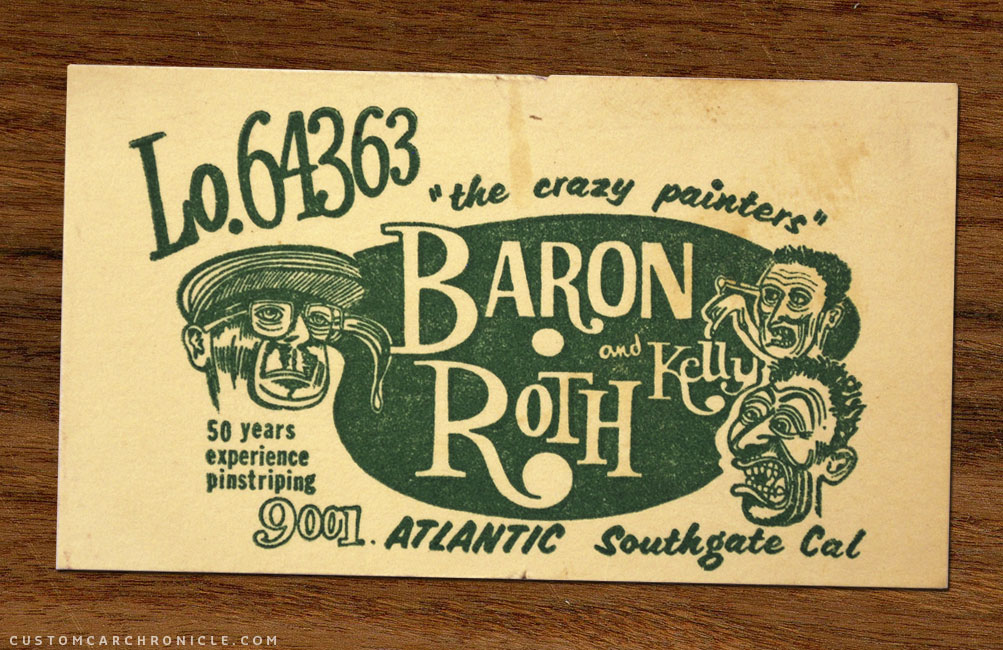 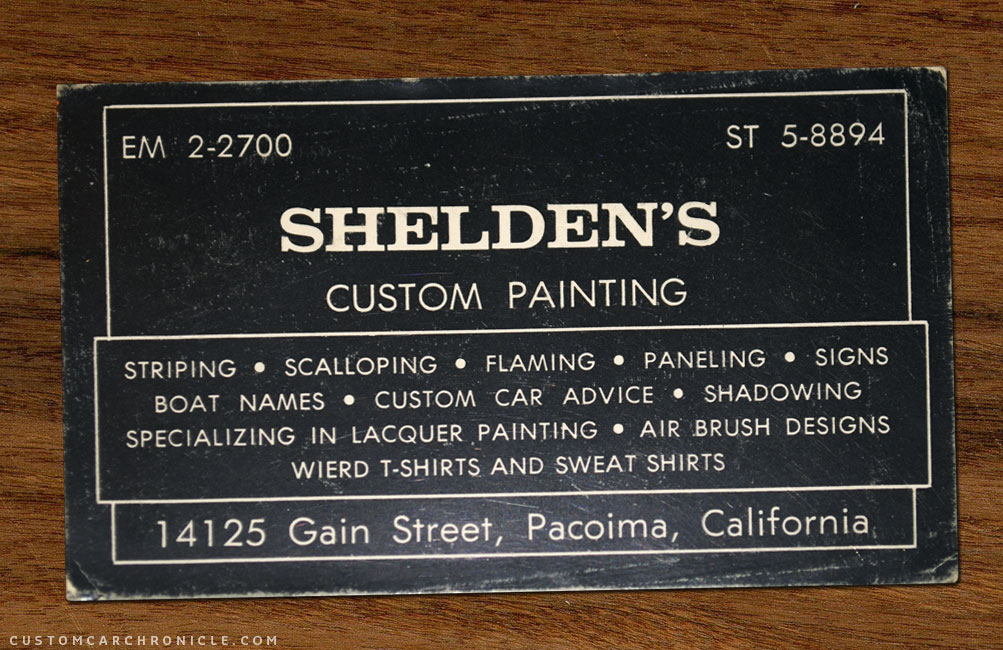 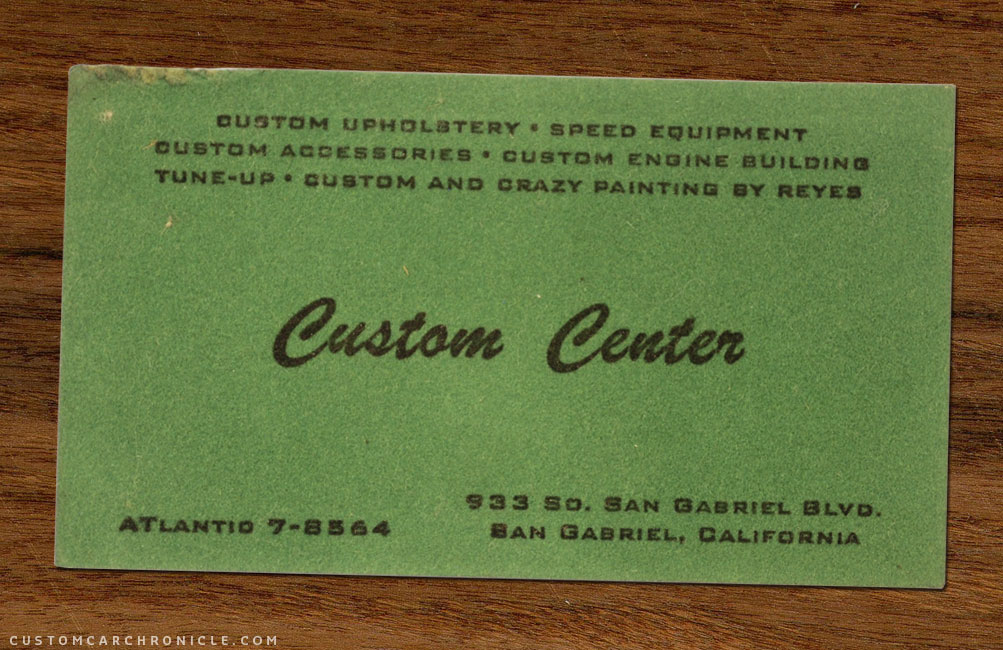 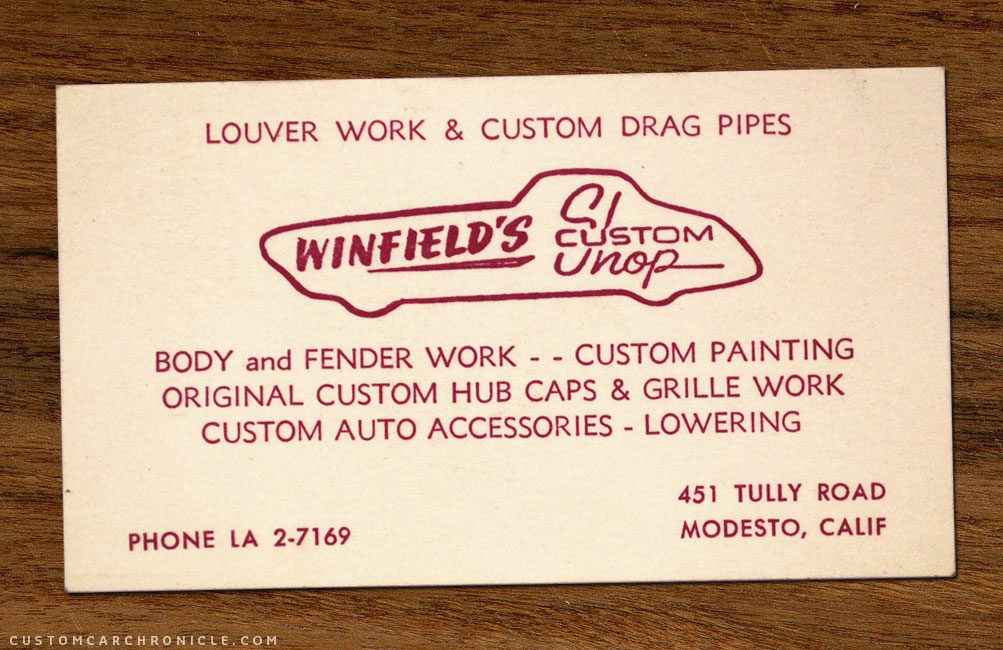 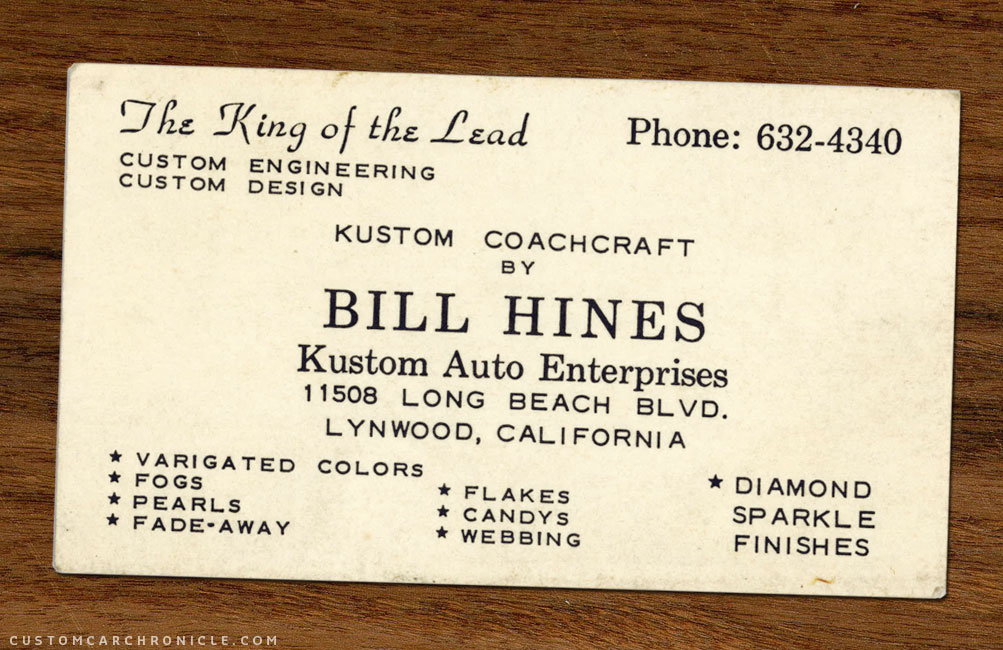 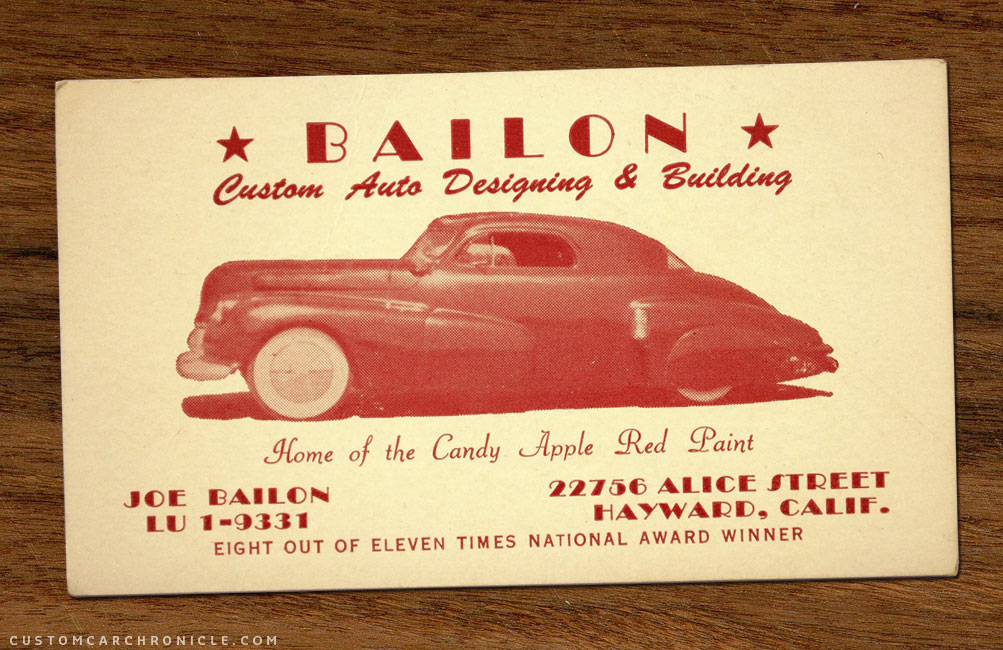 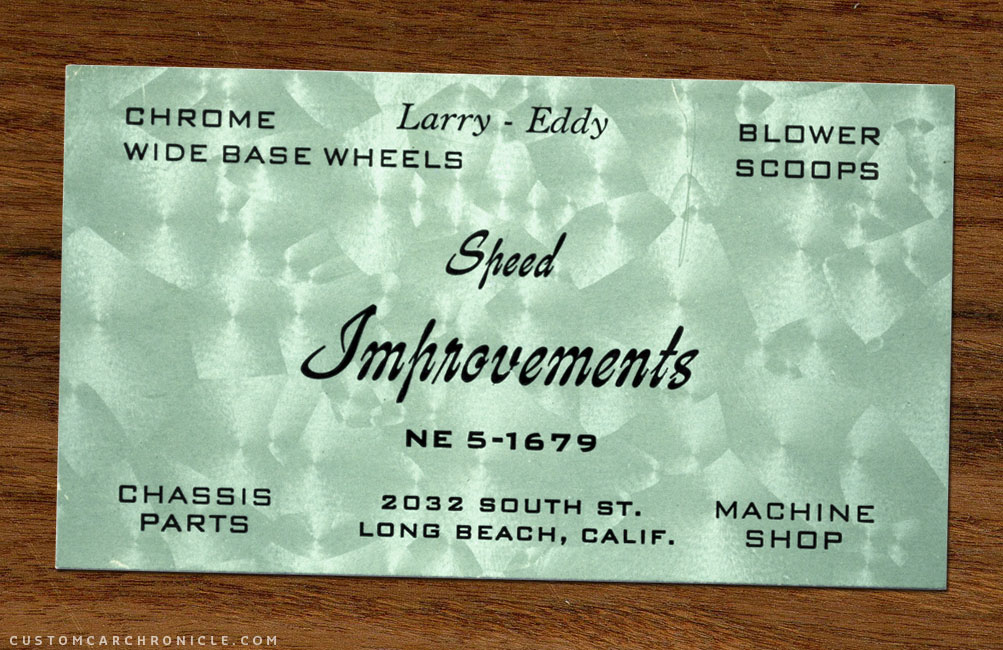 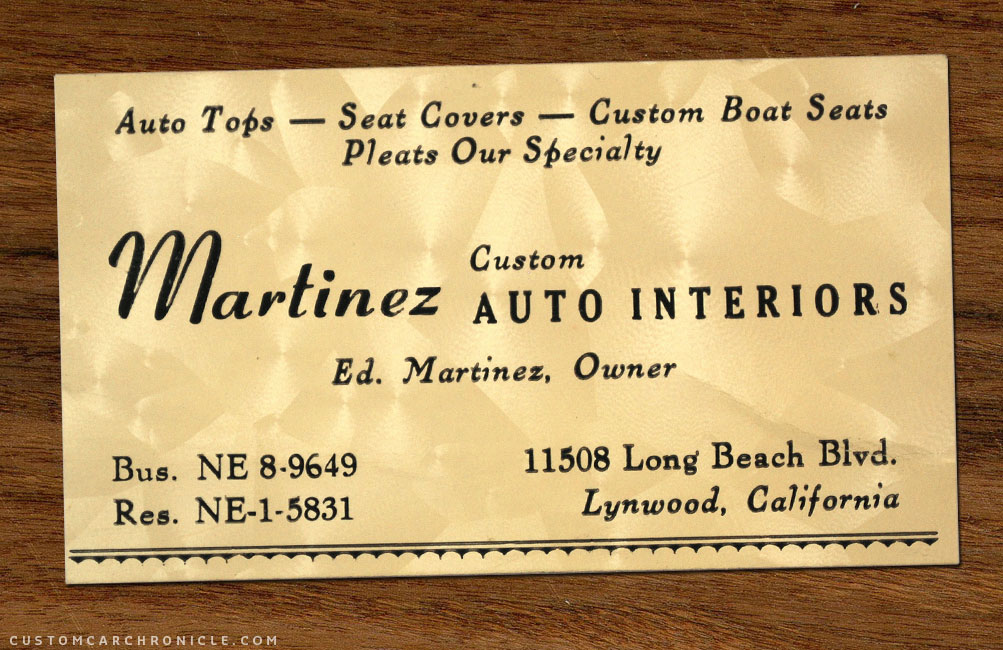 Paul Garland has been doing some amazing period Custom Car and Hot Rod work for some time. Recently he created some fine T-shirts and this wonderful Business Card to promote his body shop 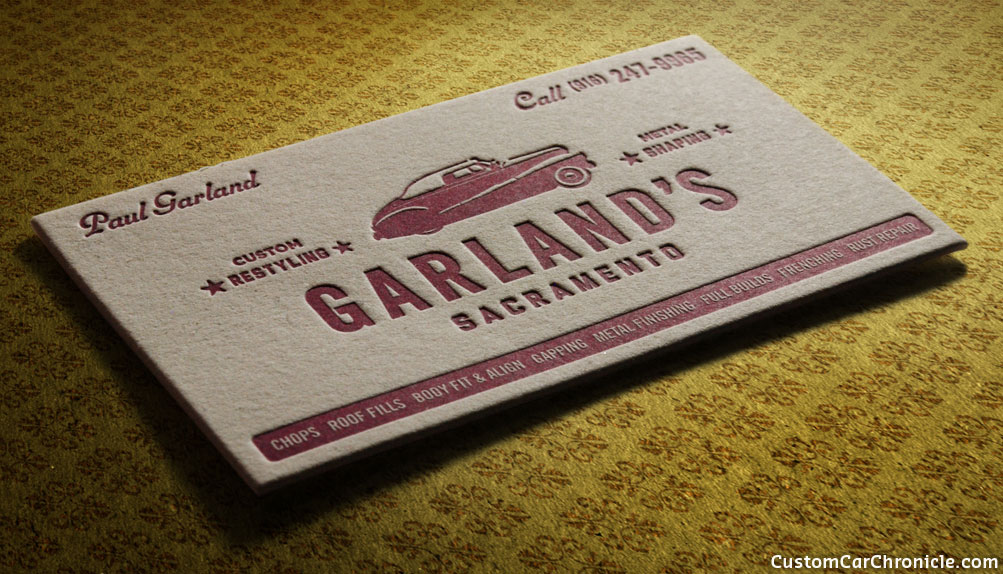 The fourth business card we would like to highlight in our series on business cards is not a vintage card like the previous three were. Paul Garland created these business cards in 2013, they are brand new. However, just like the excellent styling and beautiful craftsmanship Paul Garland shows in the work he does in his Sacramento based body shop, he also takes his business promotion very serious. Paul had a very specific idea how his business card should look like, and how it should breath the late 1940’s early 1950’s. Both in style and how it was created. Brent Rector is responsible for the design of Business Card. The image of the car used is the 1940 Mercury that Harry Westergard built in the 1940’s for Butler Rugard. I had seen a photo of Paul’s business card some time ago, and I liked it a lot. but it was not until I hold it in my hand that I realized how nice this card really is. 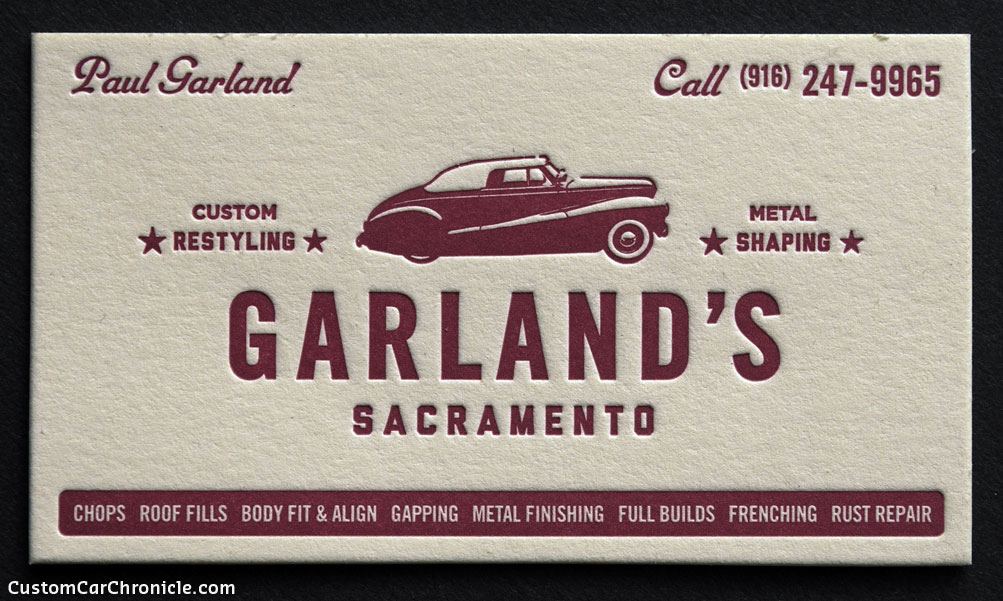 The card is printed in a wonderful grayish maroon on soft off white very heavy paper/cardboard. The printing technique Paul used, embossed all printed sections deep into the paper. This gives the card a really wonderful 3-D effect and makes it feel old and good quality, like it was produced 60-70 years ago. The layout and artwork is also styled like it could have back then, and the combination of design and techniques make this modern card fit our Custom Car Business Card Series really well. 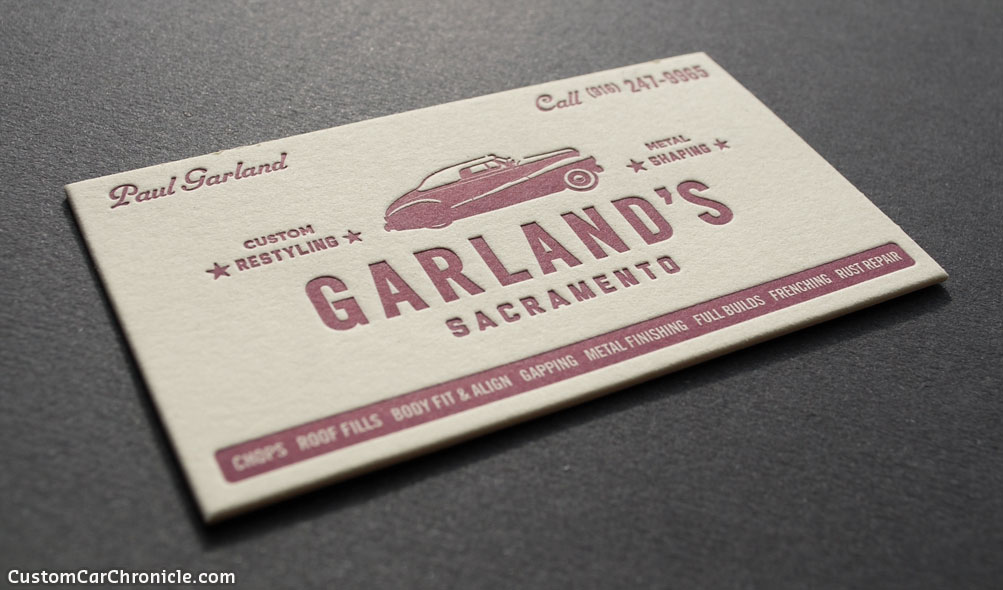 I’m not sure how many Paul created of these amazing business cards, but I’m very happy I have one in my collection now. This sure is one of the nicest Business Cards I have seen in a long time.
Paul’s business T-Shirts are equally nice, and we will show those  here on the CCC soon as well.

To get in contact with Paul Garland, give him a call at the number you can see on his Business Card, or send him an email. email Paul

In the series about Custom Car Business Cards, we highlight a nice card from an rather unknown body shop in Memphis Tennessee.

This business card is scanned at the 2013 Grand National Roadster show, because it is really nice. And because we had never seen it before, nor heard about the body shop. The owner of the card could not tell us anything about the card, or even how he it got into his possession.

The card must have been a rather expensive one to produce, with no less than three colors. Red, green and black on yellow paper. Much more refined than the usual one-color cards we know from those days. It appears to be the card of  an all round custom/hot rod shop, that could handle all the work you needed. 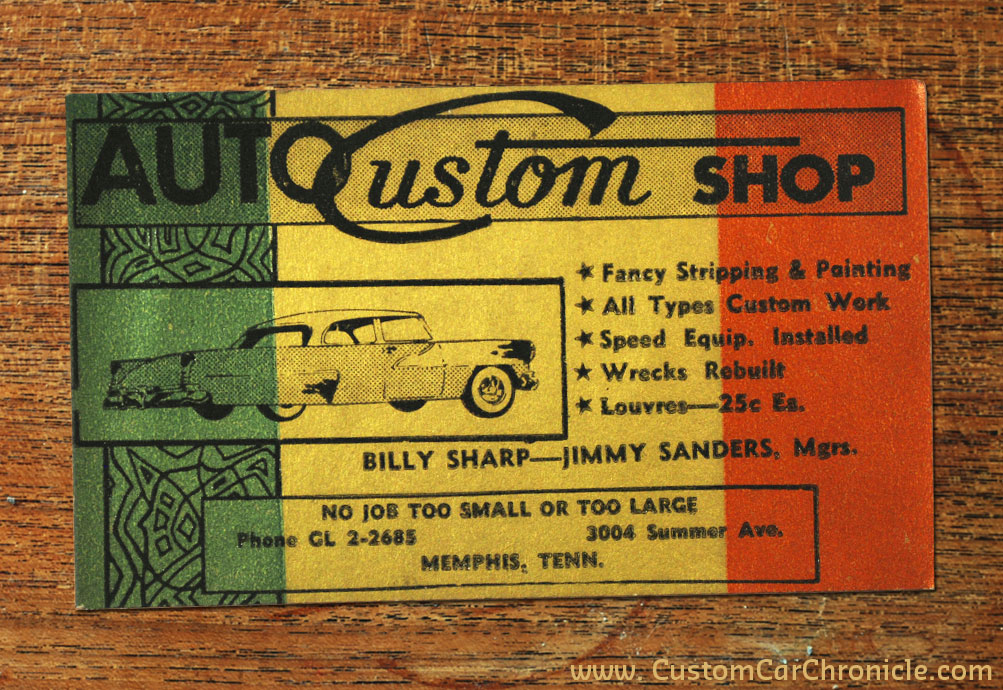 We have searched for more information about the Auto Custom Shop in Memphis Tennessee, but ended up basically empty handed. The only thing we were able to find was that one of the guys on the Business card: Jimmy Sanders, apparently did some custom work on several of Elvis Presley’s cars. We are not sure if Jimmy Sanders was still working at the Auto Custom Shop, when he did Elvis his cars, or had started his own body shop.

If any of you readers knows anything about the Auto Custom Shop, or any of the two names listed on the card, please let us know.

One of the stories we found, refers to a 1956 Cadillac that Elvis had repainted by Jimmy.

Elvis purchased the new white 1956 Cadillac Eldorado. He later took the car to his custom body guy, Jimmy Sanders and mashed a bunch of grapes against the fender, proclaiming “This is the color I want”. 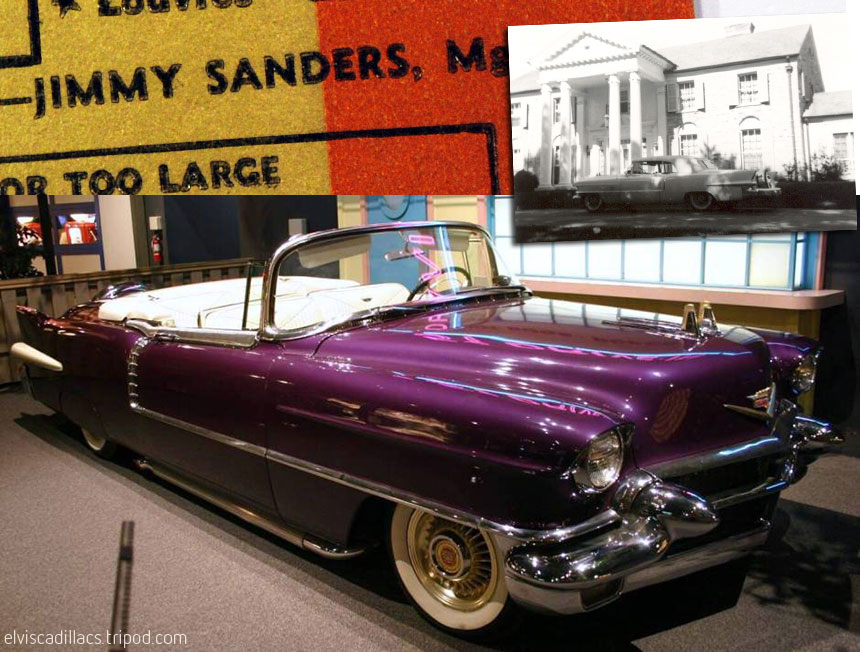 The 1956 Cadillac Eldorado that Jimmy Sanders painted purple for Elvis Presley. The inset photo shows the Cadillac in white how Elvis bought it.

In the series about Custom Car Business Cards, we like to highlight an nice and early Barris Kustoms Business Card. 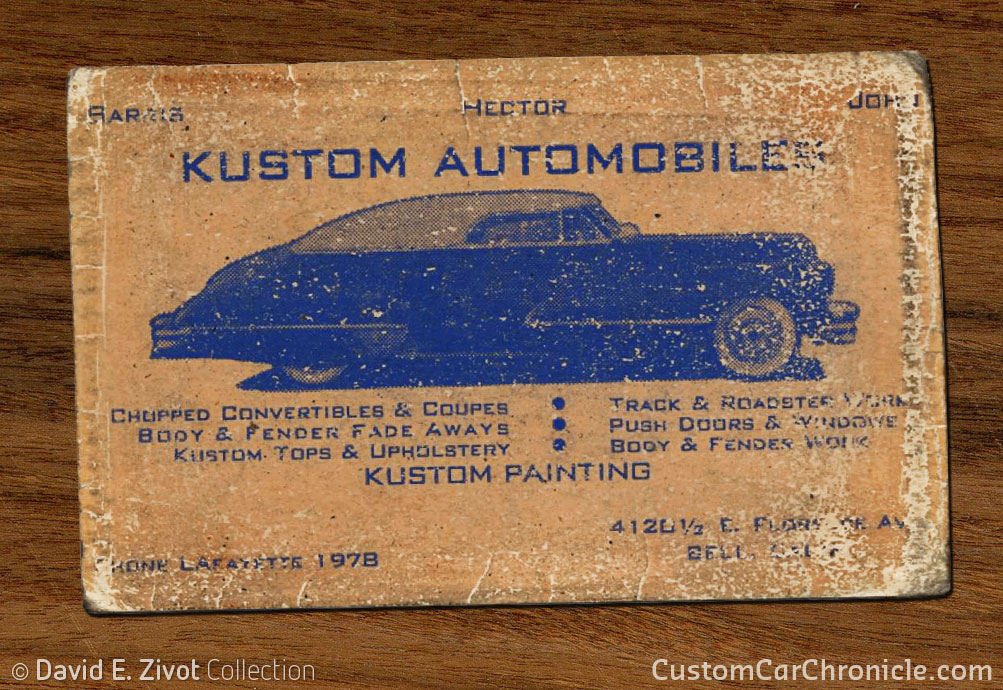 This particular card is from the David E. Zivot collection, and was given to him by Nick Matranga. Interesting about this business card is that the name Barris only appears rather small on the card. Most of the attention is drawn to the car, George Barris’ personal 1942 Cadillac, and the name KUSTOM AUTOMOBILES. The production date of this this car is not exactly known, but it must have been somewhere in 1948-49.

Could it been that George Barris originally named his shop “Kustoms Automobiles”, and not to long after these cards were printed, decided that Barris Kustoms would be a better name for it?
Barris, John and Hector’s name appear in the same size on the car. Barris are, of course, George and Sam Barris, and John Manok and Hector Sacadra. The last two were body-men at the Bell shop, and apparently their position in the shop was so, that their names also appeared on the Business Card.

Interesting to see is that the card also advertises Kustom Tops & Upholstery. Most likely, a deal about this was made with Bill Gaylord. The two shops worked together a lot, in the later part of the 1940’s early 1950’s. And all upholstery work that Barris go went straight to Bill.

The car on the card is George Barris’ personal 1942 Cadillac convertible with 1947 Cadillac grille, chopped windshield and a Gaylord’s Padded Top. The Custom Car Chronicle will is working on a full feature on this fantastic early custom which will be published in the near future. 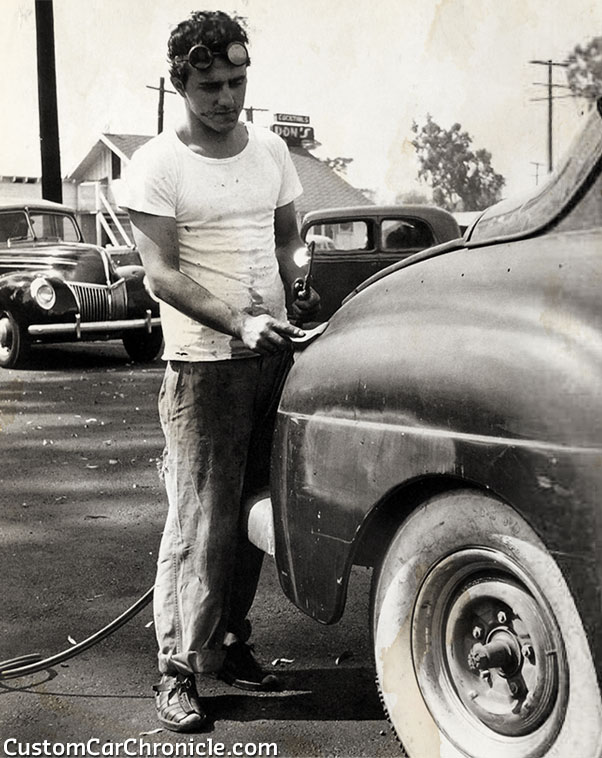 We were unable to locate a photo showing the actual Barris Bell shop. But this photo from the Barris archives, shows George Barris working on Larry Robbins 1948 Mercury Coupe outside of the Barris Bell Shop.

This is the first in a series of spotlight articles on Business Cards from well known -or not so well known- custom car builders.

These cards were printed by the business owners back in the 1950’s 50’s and 60’s with the only purpose to hand out to customers or possible customers. They never thought they would end up becoming collectors items. 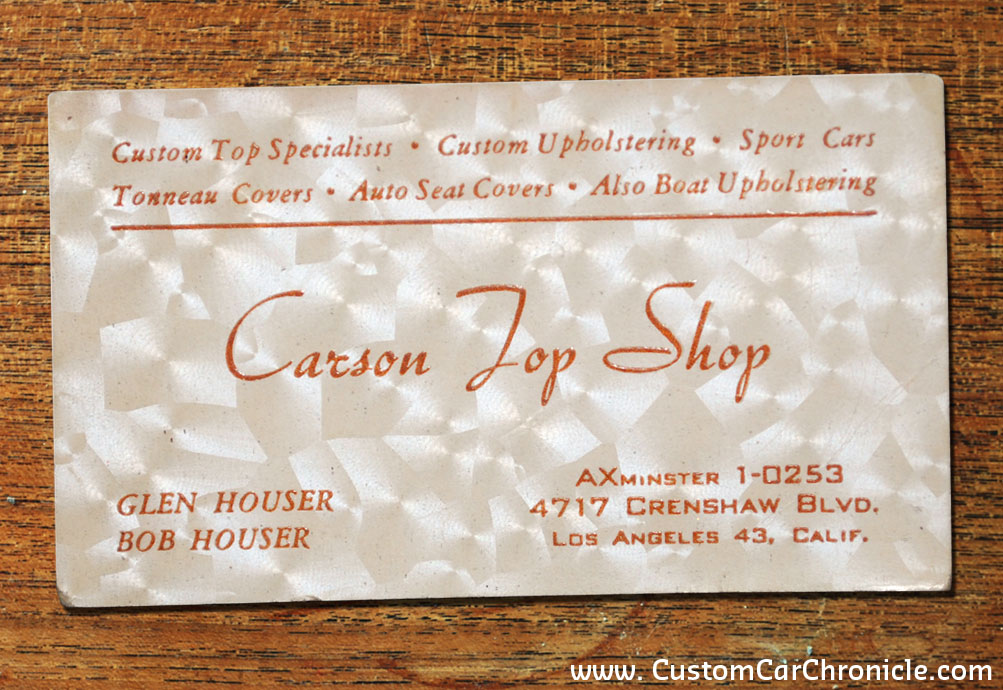 This first card comes from the Carson Top Shop. The shop moved to its 4717 S. Crenshaw, Los Angeles location in 1954. So this business card must be from 1954 or later. The car is printed on a pearlised card stock. This type of paper was used a lot from the 1940’s till somewhere in the mid 1950s. It was available in several different shades, but the egg-shell white paper used for the Carson Top Shop card was most widely used.
The printing on the card has a slightly textured and raised print and is standing above the paper’s surface, not absorbed into the paper like normal printing. This gives the card an almost 3D feel. The raised printing in the amber color on the egg-shell colored pearlised paper, gives the car a very classy feel.

The photo below shows the building the Carson Top Shop was located in, when this business card was used. 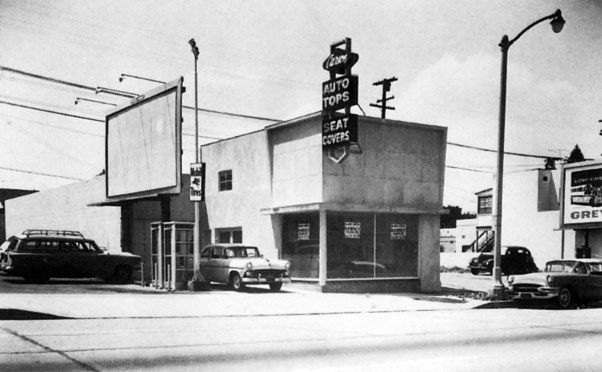