STEVE STANFORD AT THE PETERSEN

Automotive illustrator and designer Steve Stanford is displaying his work and limited edition of prints at the Petersen Museum on August 23rd, 2014.

Press release.
Please join us in a rare display of the legendart Steve Stanford’s Artwork and Illustrations of some unique rods. customs and classics from the fertile mind of this world-famous artist. By popular demand, prints and posters will at last be offered for sale for the first time to the public. These stricktly limited editions are sure to sell out. Get yours now at this one day event.

August 23, 2014 at the Petersen Automotive Museum 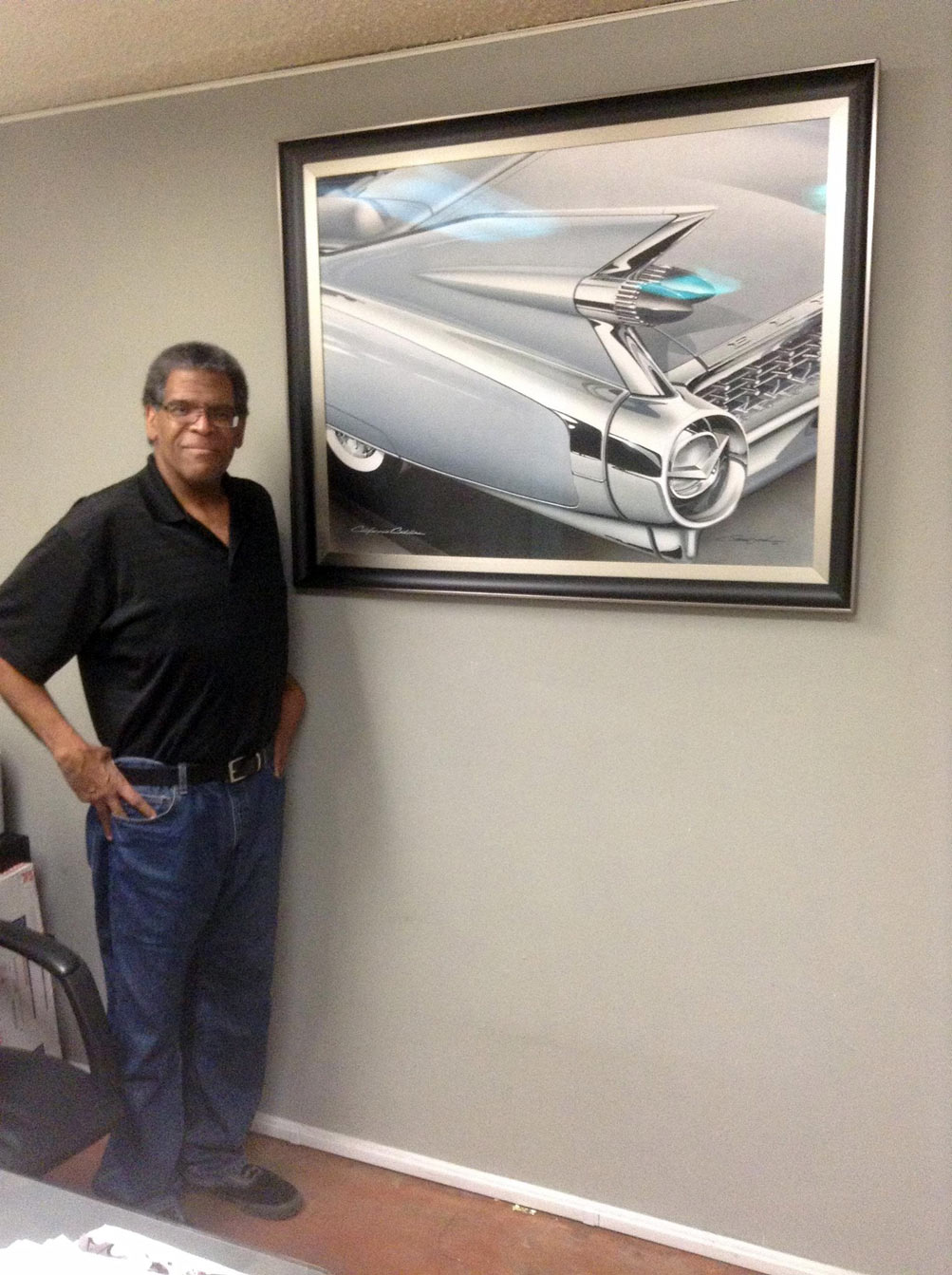 Steve Stanford stands by this 1959 Cadillac Eldorado fine art piece which he selected to use as his first authorized prints. The prints will be smaller in size than the original hanging on the wall.
[divider] 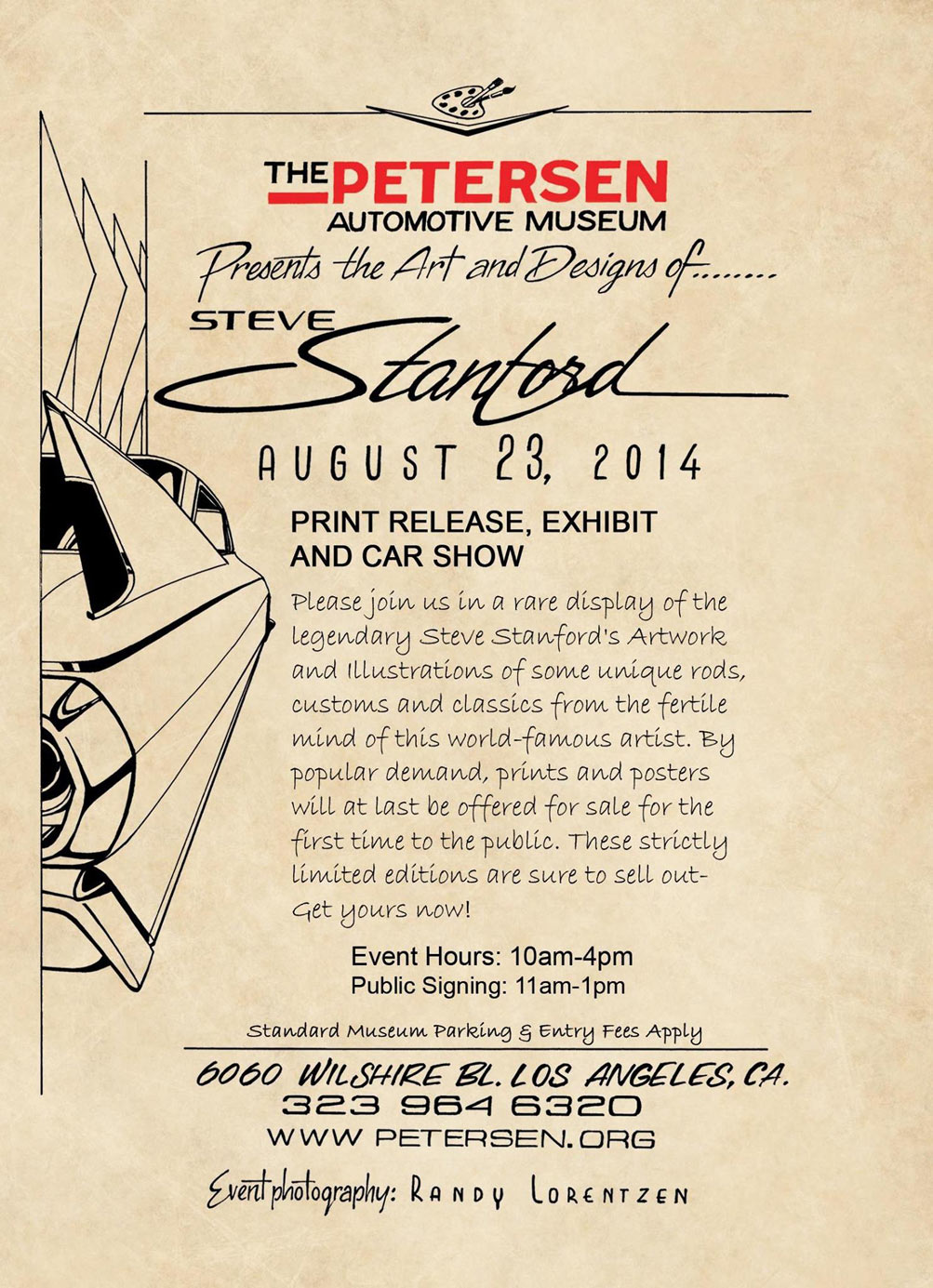 Steve Stanford at the Petersen.
[divider]

Steve Stanford is completely self taught. Always being inspired by automotive art from design studies to car brochure art. As a young kid Steve begun to experiment using different techniques copying the masters artwork and soon creating his own unique style. Steve gets most of his inspiration from his hero Harley Earl and the amazing Cadillacs he created. Steve inspired people all over the world with his creative eye for lines styles and new ideas. Many of his illustrations have been used by Hot Rod, Custom Car, Van, VW, etc builders world wide. If you want to follow Steve Stanford up close, check out his Facebook page.

Below are a few samples of Steve Stanford’s amazing artwork, and Steve at work in his studio creating magic. 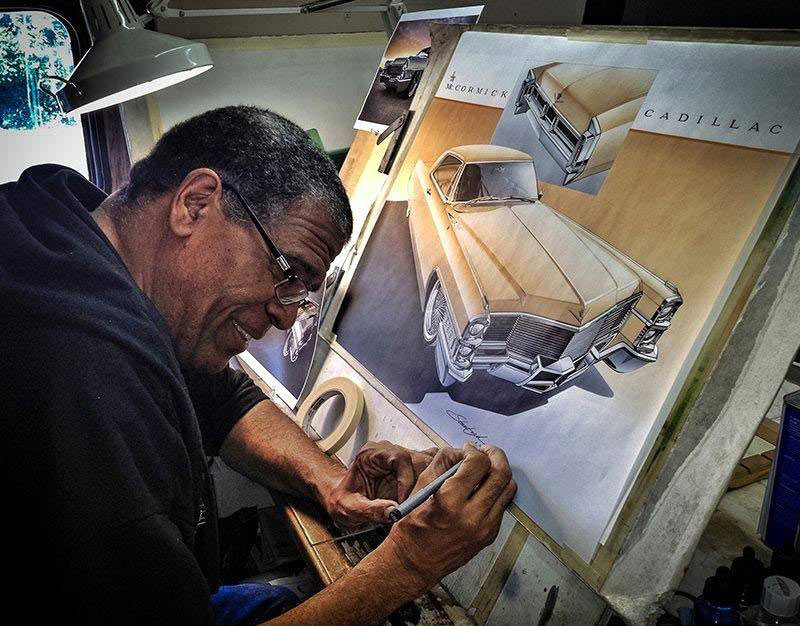 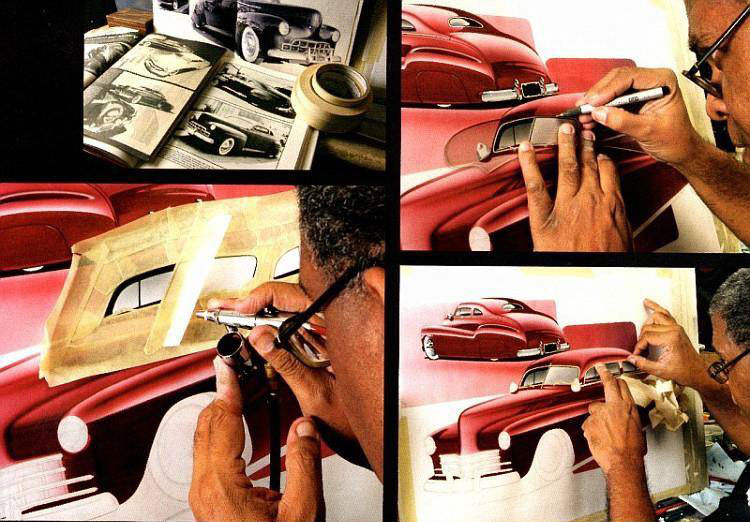 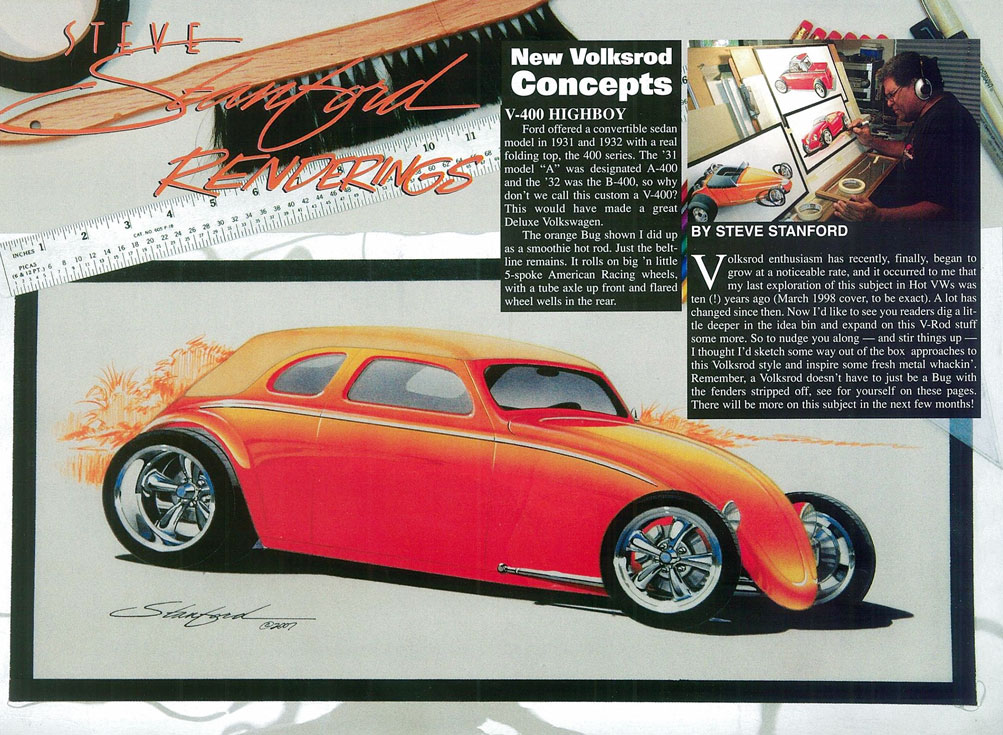 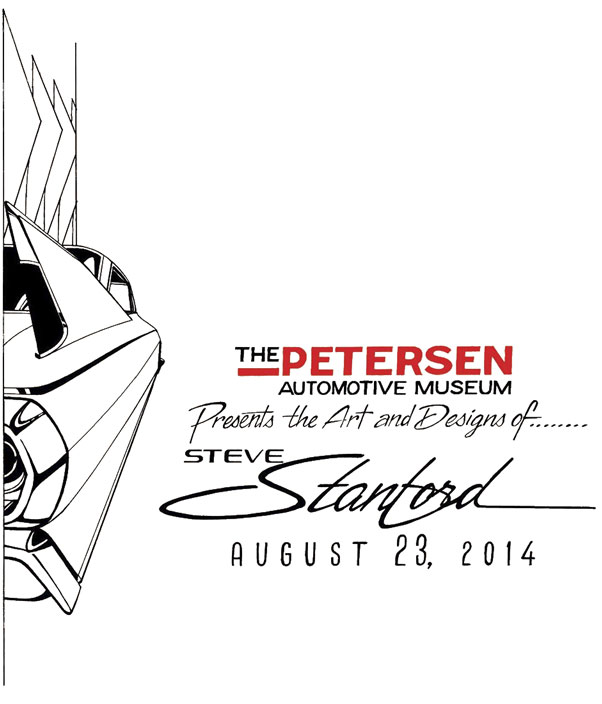 In the 1980’s Automotive Illustrator Steve Stanford created one of my all time favorite design sketches. A 1940 Ford Roadster Pick up as early 1950’s Kustom.

[dropcap]S[/dropcap]teve Stanford’s Illustration appeared full page in Street Rodder magazine. It was absolute perfection in my eyes then, and it still is today.  Steve designed a teardrop shaped ’40 Ford Roadster as how it could have been built in the late 1940’s as a Californian shop truck. Edsel Ford’s design restyled to the max. In the early 1990’s I even set out to built a 1/25 scale model car of this Ford, and I named it the Streamliner Pick-Up Truck. I studied Steve’s design for a long time. Looking at the long doors I assumed Steve started with a two door sedan body with the rear cut off. I figured that to make it look really good the wheel base had to be lengthened, and to make the body looks as long as it did in Steve’s Illustration, the body also needed to be sectioned, one or two inches. Obviously the front fenders are lengthened, but upon close inspection the rear fenders are also quite a bit longer. The top of the sedan was removed and a ’36 Ford restyled cowl and door tops added. The running boards removed and replaced with metal units with stainless protection bars on them. The pick up bed was something that needed to be made from scratch, or possibly an 1940’s trailer body. For the model I created I decided to use the sedan roof, reshaped a lot.

I had always hoped that somebody would be inspired to built a real car based on Steve’s designs. And at one point I believe George Poteet started the project. But I never saw it finished. Until a year or so ago I saw photos of an indoor show with a light gray-green colored 1940 Ford Pick-Up Truck based on Steve’s design. But sadly it was restyled as a Street Rod, and to me lost a lot of beauty in that process. Even though there is an amazing amount of work done on this car, a lot of the wonderful styling Steve did in his Illustration was not copied into the real car.

So… when I found a nice outdoor photo of this car online (there was no photographer mentioned, so unfortunately I cannot give credits to who took the original photo) I decided it was time to Digital Restyle the car to much closer to Steve Stanford’s original Illustration. My digital version is still not a 100% copy of Steve’s design, but it comes very close. My changes include the use of the DuVall windshield that came on the real car, and the addition of a Padded top. As for the last, I had always wondered how Steve’s version would have looked with a padded top on it, so this was a good time to create it. 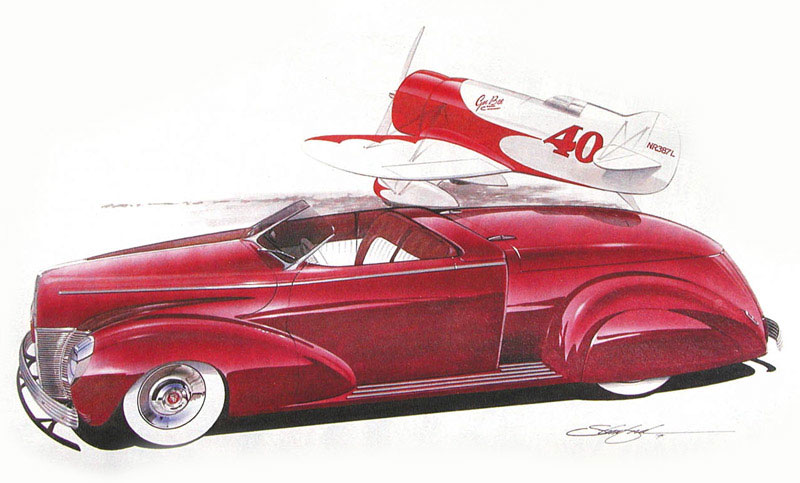 Steve Stanford’s original design as it appeared in Street Rodder Magazine in the late 1980’s.
[divider]

This is the real car as it was built inspired by Steve’s design. Nice, but to much Street Roddish and a little to boxy for my taste.
[divider]

And this is the version I created styled more after Steve’s original design.
[divider]

For my Digital Restyled version I started with dropping the body in the rear. I added white wall tires with Cadillac Sombrero hubcaps and ’37 DeSoto bumpers replace the thin Brizz units. Next up was the extension of  the front fender, reshaping the running board, extending the rear fender and adding a long teardrop shaped fender skirt. Next I sectioned the body a little to make the body look less boxy and the car appear  much longer overall. The doors where shortened compared to the real car, this would leave more space for the padded top B-Pillar. The pick up bed was reshaped, rounded more and extended in the back. The top of the front door line was reshaped to fit better with the angle of the DuVall windshield and the door tops were slightly reshaped to look more elegant, and not so flat as on the real car.
As last I created the padded top, which was actually pretty hard to get just right. It is a very short top compared to regular Padded Tops, plus it had to be mounted to the V-shaped DuVall windshield.

Once my Digital version of Steve’s Design was finished I decided to make it look a bit more like Steve’s original sketch and included the airplane in the background.
[divider] 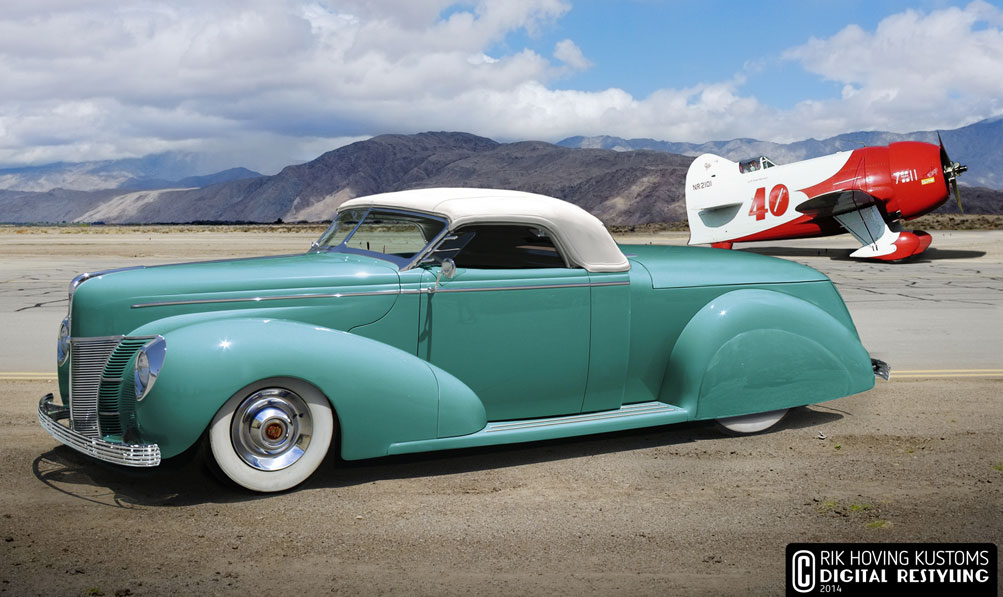 While at it I decided to make one more image with the same base elements, but with a bit more realistic background. I changed the color on the Pick-Up to a sea-foam teal color, a hint to the SoCali Plating Comp. 1935 Ford Shop Truck.
[divider]

And one more color variation, just for fun.
[divider]


Now its time for somebody to actually built Steve Stanford’s version of the 1940 Ford Streamliner Pick-Up Truck. I’m looking forward to see the in progress photos…