A long lasting dream for many hot rodder and custom car guy is to make it onto the cover of the Rodder’s Journal. Kevan Sledge’s amazing 1940 Mercury is on the cover of issue #65, and nobody deserved it more than Kevan.

Kevan’s 1940 Mercury has been in the making for many years. Build by Kevan Sledge with the help of his good friends Rob Radcliff, Octavio Chavez and Vic Jimenez. The car has progressed over the years from having air-bags, mailbox size windshield with black primer to a piece of art, a study in Traditional Custom. Obviously influenced by the Barris Kustoms built Nick Matranga 1940 Merc, Kevan set out to built the ultimate 1940 Custom Car. The styling, detail and overall flow and looks are absolutely stunning.

Kevan and his friends worked hours, days, weeks on getting the chop on this Mercury as perfect as possible. As mentioned before, it was influenced by the Nick Matranga Mercury, but if you compare the two cars, especially when it comes to the chop, Kevan’s version is just absolutely perfect. The flow from the front to the rear is so nice, this really is a good sample of how these cars should have come from the factory.

I saw Kevan’s Mercury in person in 2009, when the car was invited to be part of the Sacramento Autorama Mercury Gathering. I spend many hours looking at that car that weekend, I could just not keep my eyes off the flowing lines of that chop. And back then, the car was far from finished. It was in fresh green primer, and a lot of details were still missing. In the following years, Kevan started his own body shop, Sledge Customs, in Auburn, California, and spend many hours after work finishing his own Mercury. Each time when Kevan showed new updates it became evident that this was THE 1940 mercury. When the car debuting in paint, at the 2014 West Coast Kustom, everybody was talking about this car. The color Kevan had picked for this car was the just like everything else, right on the money. And then it became evident, this car needed to be featured by the best magazine in the field. The Rodder’s Journal.

In the summer of 2014 Steve Coonan and Geoff Miles from the Rodder’s journal invited Kevan for a photo-shoot for a full magazine feature on the car. Another real Traditional Custom to be featured again in the magazine. The car was photographed on location, as well as in the RJ Studio. But it turned out that the dark green paint did not work well with the studio lighting and turned almost completely black. So those photos never ended up in the magazine. Issue #65 from the Rodder’s Journal is now printed and getting ready to be shipped to the distributor and subscribers all around the world. And the best thing, Kevan’s 1940 Mercury was used for one of the two Cover Photos… And it looks absolutely stunning.
Congratulations Kevan Sledge. 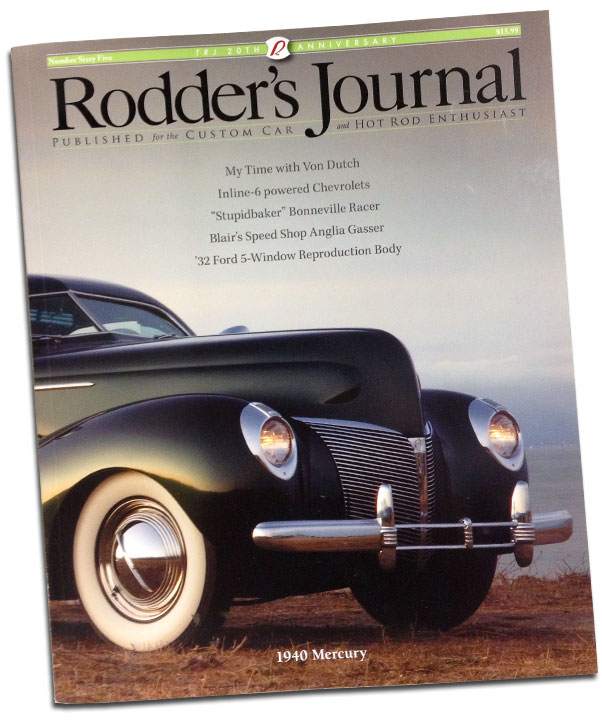 While at the Rodder’s Journal Studio for the photo-shoot, Kevan took several photos in the dark studio’s. The RJ Team was setting up reflection board and getting everything ready for the photo shoot. These snapshots Kevan took show that the car looked very dark, and the RJ professional camera apparently could not bring the brightness in the color either. So the photos that were taken were never used. But we have Kevan’s Snapshot to show, and it does show the amazing reflections on the perfectly restyled 1940 mercury. 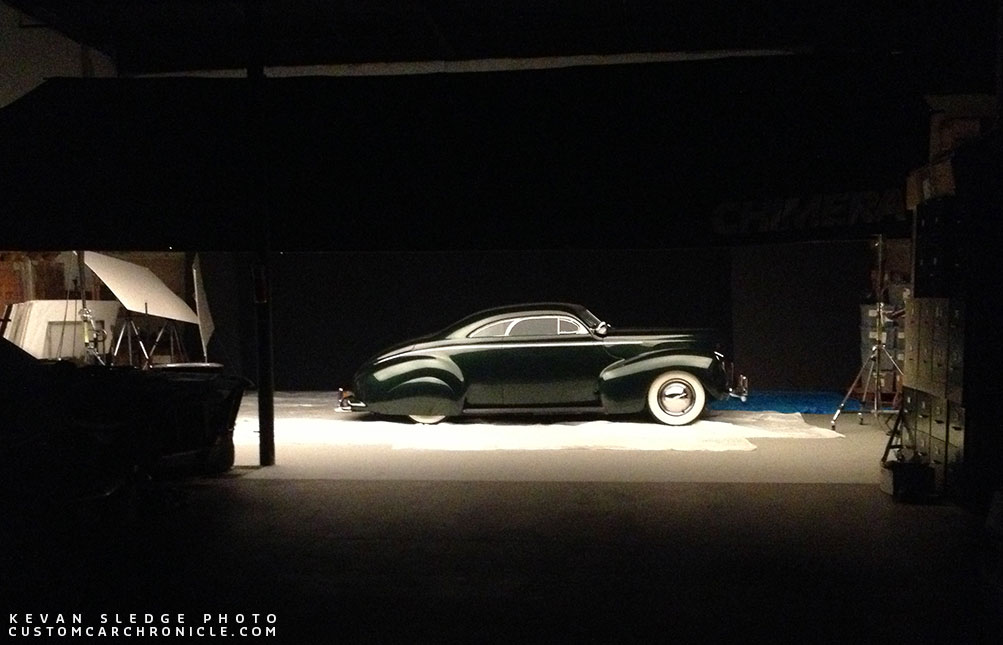 Overview of the studio with the Mercury in the overhead studio light, the reflection boards on the left and the Rodder’s Journal archives on the right.
[divider] 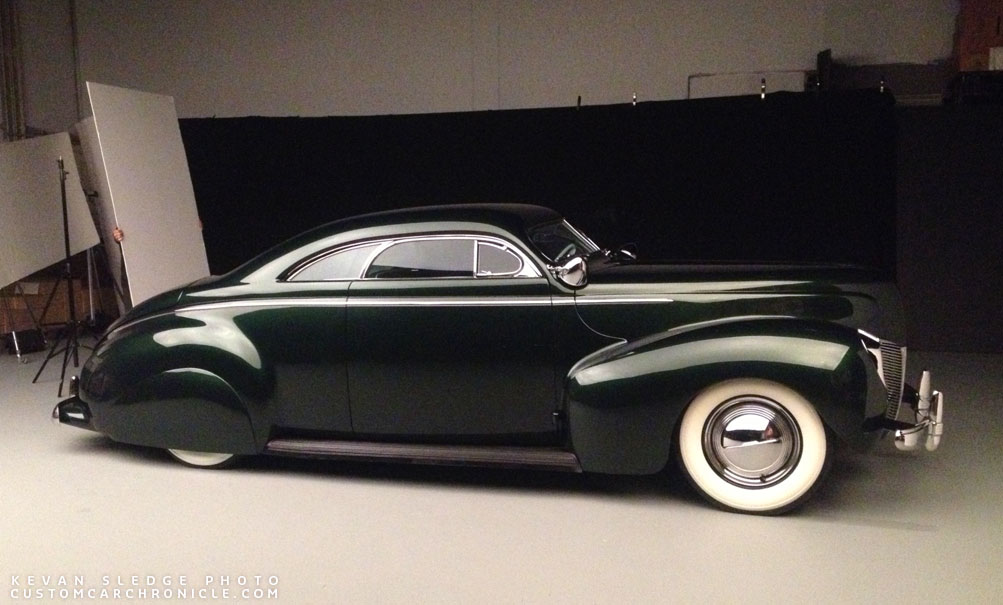 I think that is Geoff Miles walking with one of the refection boards.
[divider] 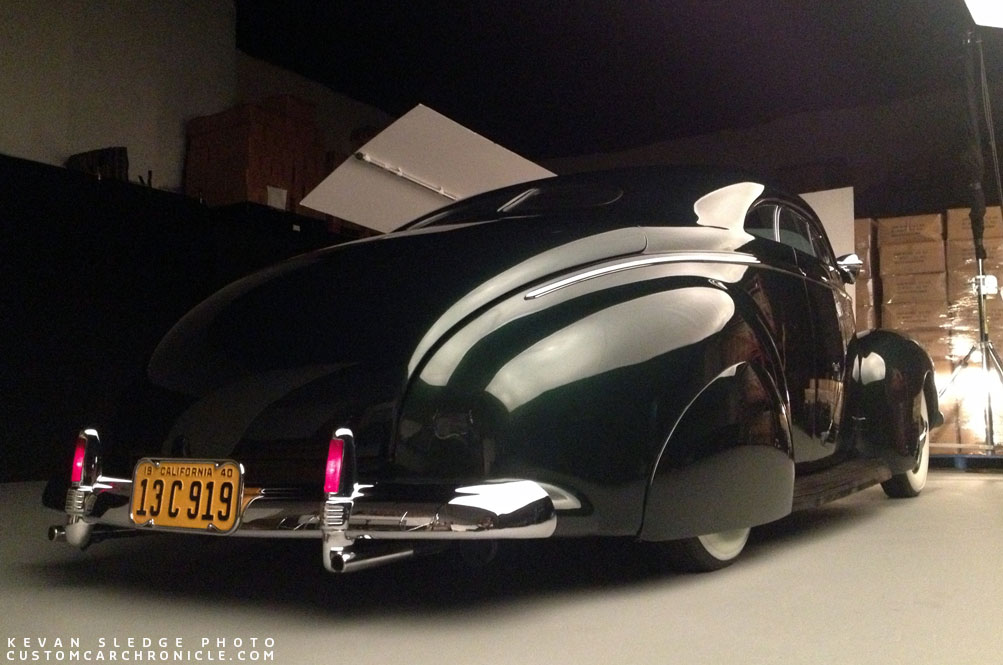 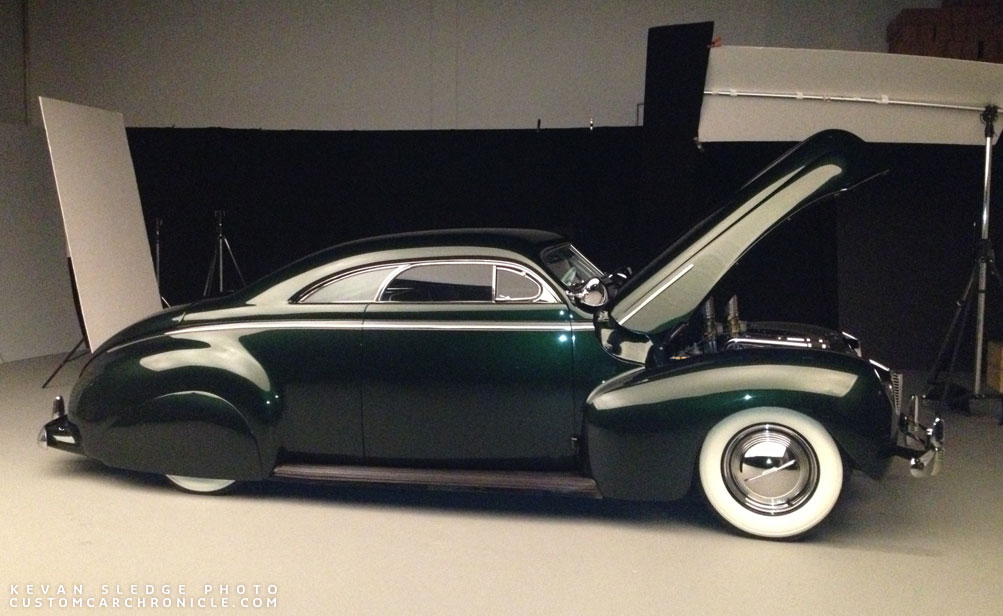 Getting ready for some engine detail shots.
[divider] 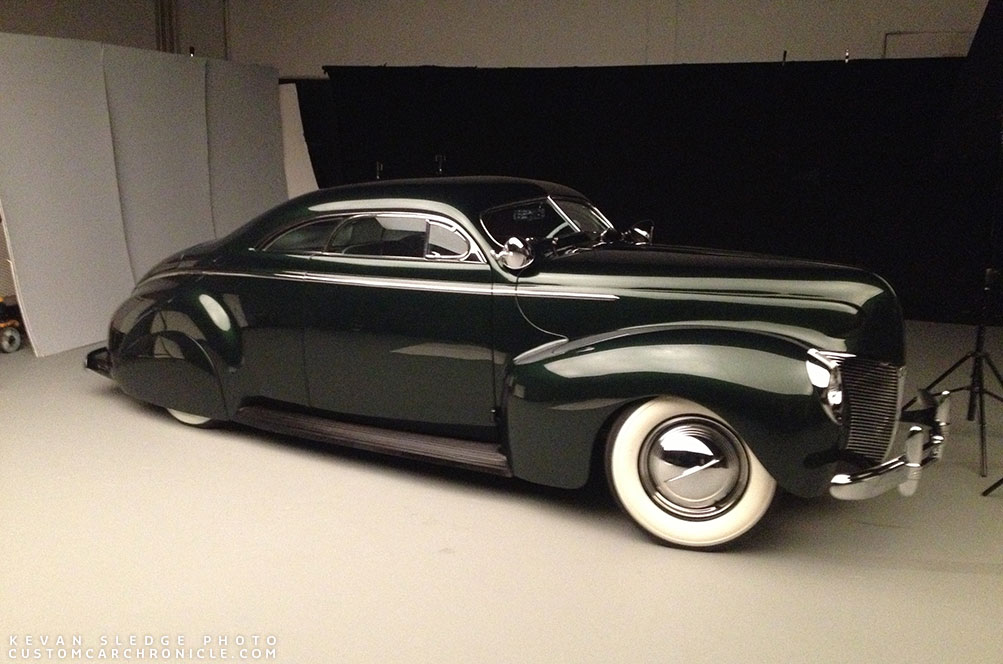 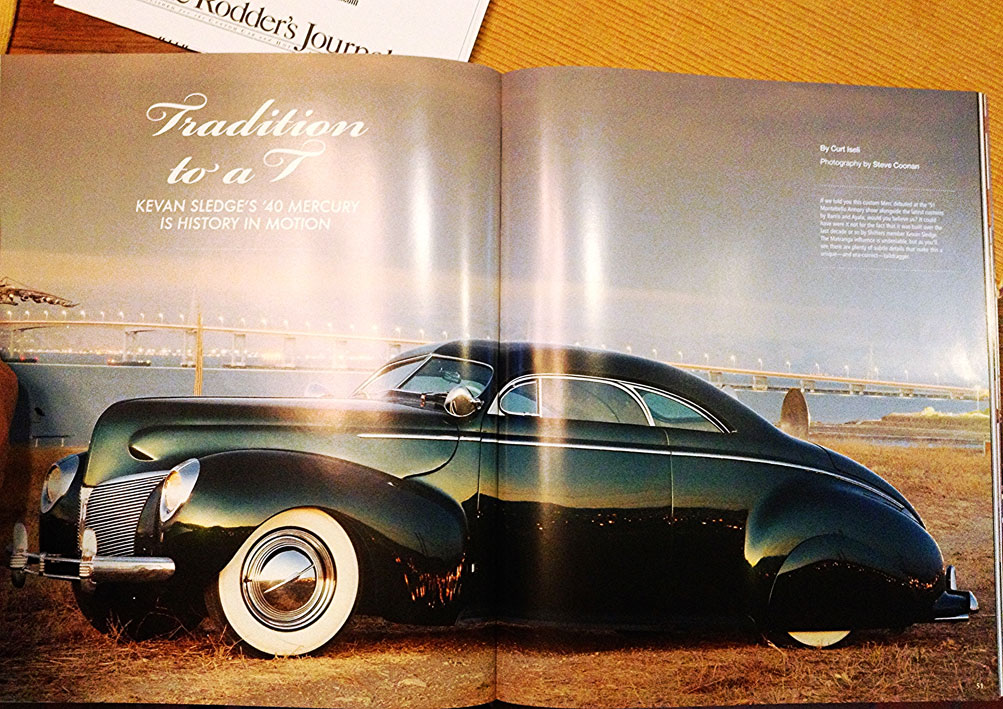 Openings spread of the article on Kevan’s Mercury. The article is written by Curt Iseli, and the photos taken by Steve Coonan. Photo of the advance copy of the Rodder’s Journal issue #65.
[divider]

This issue has a really nice mix of Hot Rod’s, Race Cars and Custom Cars. Something that has not always been the case with the Rodder’s Journal magazine. Especially for the Custom Car enthusiast the content of the issue number 59 is really nice.

No less than 36.5% of the magazine is devoted to Custom Cars a percentage we have not seen for a while. Congratulations to the RJ team for a very nice balance in this issue. 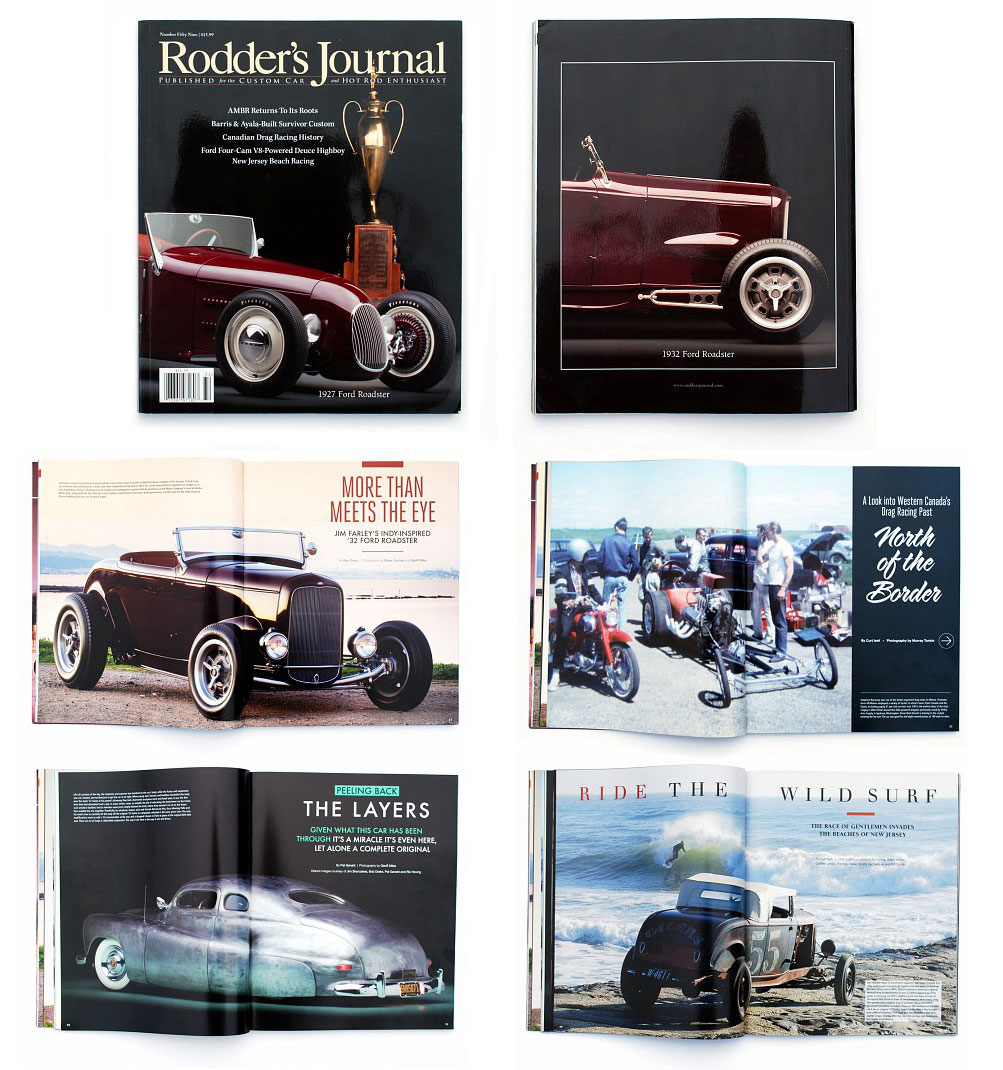 About the articles in this issue.
Issue Number 59 has an wonderful article on mostly custom cars and a few Hot Rods at a mid 1950’s Ford Custom car show set up inside the famous and wonderful Rotunda building. An article that gives a good look at some of the trends on the east coats in the mid 1950’s

Wonderful photography by Steve Coonan and inspiring writing by Pat Ganahl on Mark Skipper’s 1951 Ford Victoria. An amazing period perfect very well brand new build custom. A Hard top shoebox with very blanched proportions. The only thing that is missing from this issue is that one of the cover images could have been this “Royal Victoria”

Geoff Miles photographed the bare metal Jack Stewart 1941 Ford in the Rodder’s Journal studio, and Pat Ganahl wrote an in depth article about the history of this historical important Ayala/Barris custom car. The car was brought over from Denmark were the current owner, Palle Johansen and his team, restored the car and decided it would be best to show it in bare metal at the GNRS. The car is now back in Denmark where the team will finish the restoration. And who know the all finished car will once again graze the pages of the Rodder’s Journal.

The Race of Gentlemen invades the beaches of New Jersey is a very nice article with wonderful photos by several photographers. The text and photos show the fun these contenders and spectators must have had.

Both the Indy-Inspired roadster and the AMBR articles are as good as they can get in the RJ. Both articles have wonderful photos by Steve Coonan and Geoff Miles taken both in the studio and outdoors. And the level of details on both cars is equality impressive and is show excellent both in photos as well as in words.

The article on the rather unknown Cars and Clubs magazine is very welcome as well. The magazine was published and spread in the Upper Midwest of the US and are quite hard to find these days. So the material shown in the article, mostly scanned or photographed from the printed magazines is very welcome. And its really great for the people involved in the magazine back then that they finally get some recognition with this article. We need more articles like this. 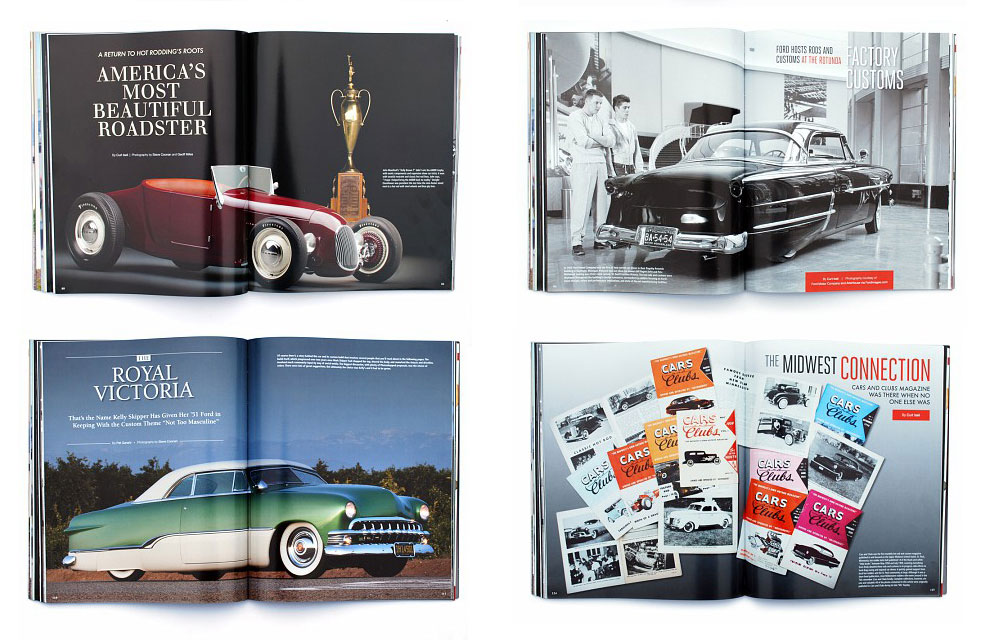 There are a total of 160 pages in this issue. 126 pages are devoted to real content which we can divide in the four main groups:

The Custom Car content in this issue is very well worth buying this issue if you don’t have a subscription.
The Hot Rod content is always excellent in the Rodder’s journal, so if you are into quality hot rods, then there really is no excuse not to buy a copy or get a subscription.
The Race Car content is a little low in this issue, but what is there is very well worth buying the magazine. There are a series of really great historical images with great drag cars. 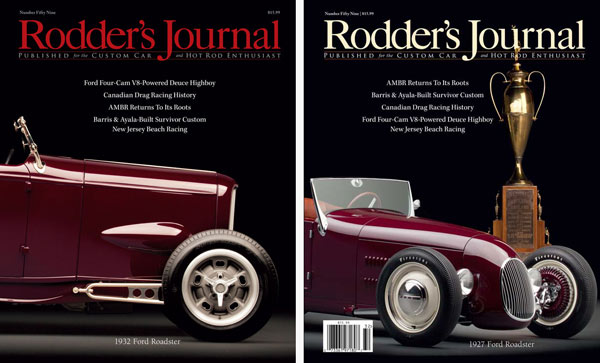